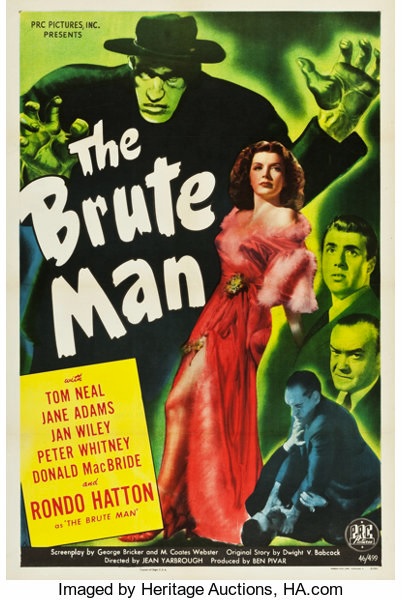 The city has been gripped with terror because of a string of murders committed by the sinister Creeper. The police are being pilloried by the public for their inability to locate the maniac, even when given a 24 hour deadline by the mayor. New clues soon point to a group of college friends from some years ago, where the popular but brash athlete Hal Moffat was the victim of an accident with sulphuric acid. With Hal as their number 1 suspect, the police redouble their efforts, while the brutish killer forms a friendship with a blind girl Helen, the only person he's met who isn't afraid of him...

The Brute Man is an interesting film from the 1940s cycle of Universal horror, as it stars the legendary Rondo Hatton. Disfigured with Acromegaly, Hatton rolled with the punches of life and found himself with a pretty lucrative career as an onscreen ghoul. This was sadly short-lived, as he died in 1946. 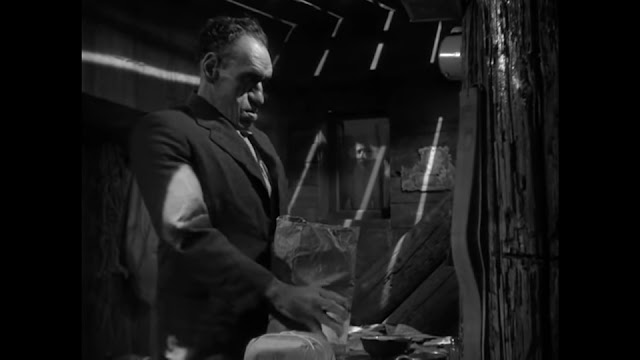 The plot to this film is pretty grim, and those who don't die are assholes, save for the blind Helen. It's well written, though the lack of a true protagonist makes it a little difficult to follow at times. The story has a fascinatingly autobiographical context. A lot of the details were really part of Rondo Hatton's life!...Well, except for the 'becoming a murderous madman' part. He only played them!

The Brute Man opens quite well. It's a little random, and we have zero context for anything, but the movie still gets across what it needs to in relatively short order/quick succession, introducing the Creeper well.

Who the movie's protagonist is is a good question. First up is a storeboy named Jimmy. He's a bit of an asshole who feels the need to hassle the disabled in-case/on the off chance they're homicidal lunatics, and it's lucky for him in this case that he happens to be correct. However, his spying gets him killed! He gets less than 5 minutes of screentime before getting abruptly murdered, which felt strange. He was all lined up to be the nosey lead who gets the girl and saves the day! 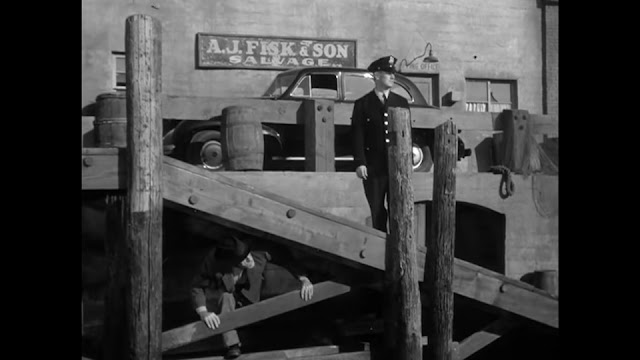 The other possible protagonists are police detective Gates, and Hal's old friend Clifford. The former spends his time grinning like an idiot and playing cards, while the latter barely appears, and might not be entirely rosey. Ultimately Helen would probably deserve the title of protagonist, but she doesn't appear enough either.

The film's true lead is most definitely the villainous Creeper. He gets a bit of depth, and isn't quite a one-note baddie. His relationship with the innocent blind girl is reminiscent of Frankenstein, and other 'tender monster' moments in cinema, and I also feel it contrasts interestingly with how Hal's character was described back in his college days! ...Or it clashes terribly, coming across like he's a completely different person than in the flashbacks. Could be either I suppose. Overall, Hal's demeanour with Helen would probably be more at home in the story if he was a misunderstood monster, only lashing out at those who legitimately wronged him. Ultimately, the friendship is undermined a little by the fact that unlike Frankenstein, the Creeper is an absolutely unrepentant murderer. Perhaps it would've been better had there been a twist, such as 'Clifford was the real Creeper all along, and Hal is a noble hero', but it's entirely straightforward. 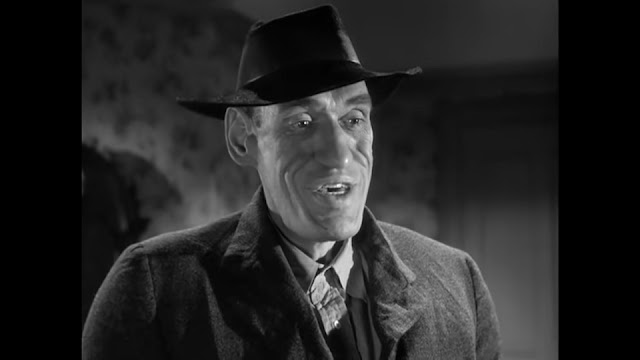 The Brute Man looks great. The locations feel real, and the direction complements the proceedings, lending not only some interestingly filmed moments, but a gloomy atmosphere that permeates the production. This definitely ranks among the better Jean Yarbrough films I've seen, though that might not be saying much. He directed hundreds!

The acting here is pretty good. The main standout is Rondo Hatton. He was not only suffering from his debilitating condition during production, but was also dying, and wouldn't live to see the release of this film. With that in mind, it's surprising just how good a performance he turns in! I suppose dialogue wasn't his specialty, since/as his line delivery isn't the strongest part of his performance, but I've read multiple reviews that make him out to be a real turkey, which wasn't the case for me at all. As for his non-verbal performance, do I even need to say anything! He's imposing with his stature, and moves like a powerhouse. As for the creep factor, his condition of course played the major part in him getting these roles, but Hatton must've had something that allowed him to portray these characters the way he did. The creepy looks he gives transcend his disability, I think, and nor did it stop him from expressing a sensitive side either.

Another actor plays the Creeper back when he was the unencumbered Hal Moffett, and he's...different! The quiet and almost childlike psychopath is suddenly an arrogant and perfectly spoken college ace. To its credit the film does at least have a token mention of the acid affecting Hal's glands, to explain why having acid splashed into his face made him grow three sizes. It's probably pretty bad science, but hey, it's a horror movie, so realism isn't exactly what we're here for. As long as the writers cared to bother with an explanation. 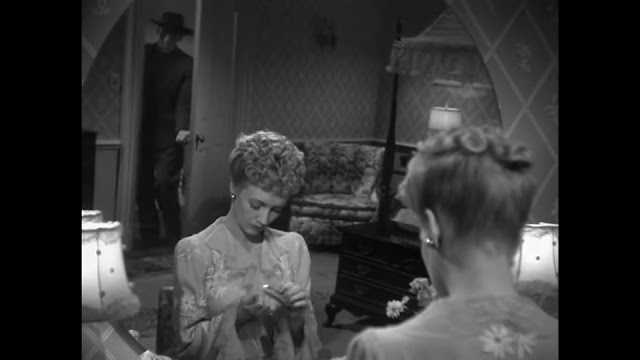 The Brute Man isn't perfect, but it's a very entertaining picture, and a great chance to see Rondo Hatton in a leading role. I definitely recommend it!...
Posted by Chris Hewson at 4:19 AM