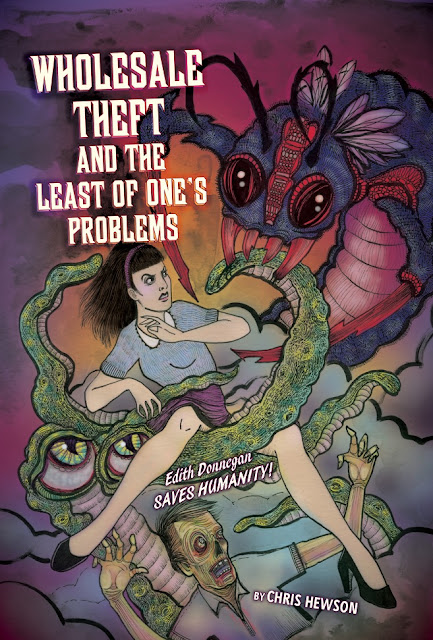 Hello everyone. I've got some great news. After a couple of years of working on and off, my book is finally published! Released for now on Amazon, and available both on Kindle and through print.

Wholesale Theft and the Least of Ones Problems is about the adventures of Edith Donnegan, a young woman who invariably finds herself up against killer robots, mad scientists, and lizard men. All the while, she has to deal with incessant chauvinism for the most absurd of reasons, but strives to succeed.

The Key in the Grave
A haunting in a feared old mansion catches the attention of Edith, who decides to play amateur ghost-hunter to discover what happened in the past, and what’s happening now.


Empire of the Future
While on holiday to Luxembourg, Edith witnesses the world change into a bizarre hybrid of past and future technology. If she wants any chance of getting back home, she’ll have to stop a power-mad ruler before the changes are permanent.

Undead Teenagers of the Lost Island
On an uncharted island, mysterious and dastardly experiments threaten a group of visiting teenagers. Can Edith rescue them in time from the clutches of a villainous mad scientist?
And more!...
Posted by Chris Hewson at 8:56 PM