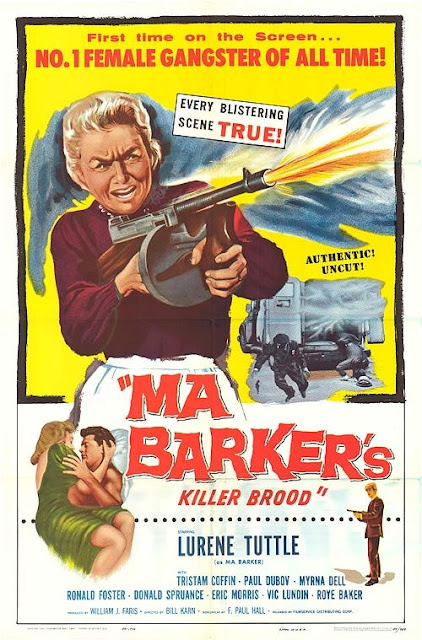 In the times of the Great Depression, many crooks and sinners roamed the city streets, but none could hold a candle to the fearsome Ma Barker and her murderous kin.

Ma Barker's Killing Brood has the appearance  of a 1930s flick, but the sensibilities of its time. That of increased cynicism and brutality. It's interesting that while Bonnie and Clyde takes all the credit for its leaps and strides, b-movies had their fingers in that particular pie long before then. They just weren't as accepted in the mainstream by snooty critics, whereas that film had more money and star power to get their attention. 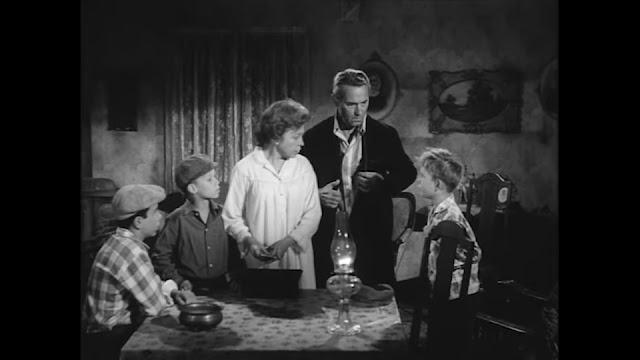 The film takes place over a fairly long time, and while this isn't only an hour long, it does still feel a bit...rushed, if one could say that? The scenes themselves that we see aren't rushed, but the film does go over so much time in such little space that it can feel a bit quick. Another issue is that there are a bit too many characters. I don't blame the movie for this, because this is the 1930s gangster scene. There were a lot of people involved. But when you've got 5 main crooks (plus Al Karpus), as well as faces like Machine Gun Kelly, Babyface Nelson, and John Dillinger, it can get a bit crowded. Thankfully the movie does  to alleviate this, focusing on just a few people at a time, rather than trying to have every character do [everything] in every scene  The only characters I felt who were shortchanged were Karpus (he could've been excised from the film to no ill effect), as well as Nelson and Dillinger, who didn't feel like the independent and larger than life figures they were in life. 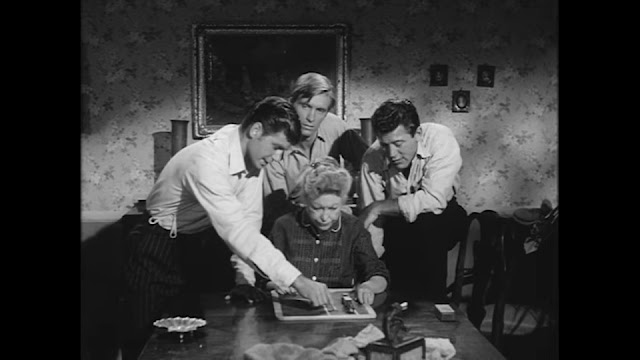 Ma Barker is an interesting character, and the fact that she was a real person makes it all the more mystifying. Rattling off lines like "Stop shakin' and start shootin'!", all while plotting [ingenious] heists and outwitting rival gangsters who scared most other people in the racket, she's a great villain, as well as a strong female character for the time (if such a term is appropriate for a real person, and such a monumentous bitch). Even in scenes where she's up against the wall, her ingenuity shines. Her lowest moment as a character however comes in the place where you'd last expect it! It's not a scene of shocking violence, but a softer scene at a funeral, when she puts all the blame for what happened on the shoulders of her ex-husband. It's not even in an intentionally malicious way, and that's what makes it worse. You can tell this kind of thinking is second nature to this woman.

The sons mostly all blend together to begin with, bar the sensitive Herman, but as the film goes on they become more distinctive, and do different things.

Given that all the gangsters of the time and their stories all ended in the same way (BANG), one might assume it'd be boring watching a film based on them, where you know the outcome. I disagree, because these crooks got up to so much crazy stuff in their careers as to make any movie tense no matter what else you know. Also, these guys were such lowlife baddies that you relish the thought of their comeuppance, and look forward to it. The only real issue is that real life isn't a movie, so you can't wrap up every character's story in a neat 90 minute bow. The 'Where are they now' coda at the end alleviates this somewhat.

The effects here are quite good. There are some surprisingly bloody gunshot deaths for the time, though others are lacking, with actors just miming being hit even though nothing has actually happened. 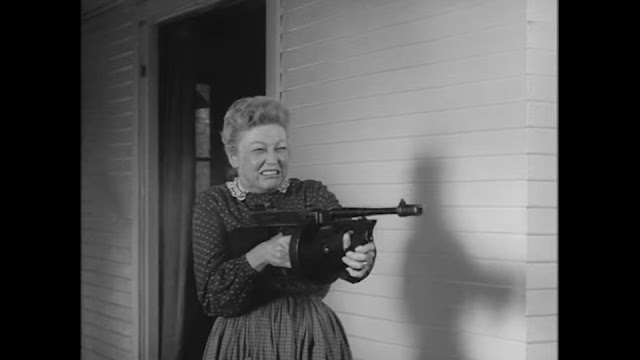 The acting is a high point for this film. While not all performances convince, the main ones all do good jobs.The sons look suitably freaky, and don't look like people you wanna cross. Lastly, Lurene Tuttle is the standout. She makes the movie, and delivers a terrifying performance as this criminal mastermind. She gets across the moments of vulnerability very well, making us understand her character.

Ma Barker's Killing Brood isn't perfect, but it's a thrilling ride, and a neat snapshot of this tumultuous period of American history, seen through the lens of one of its most dangerous figures...
Posted by Chris Hewson at 9:12 PM