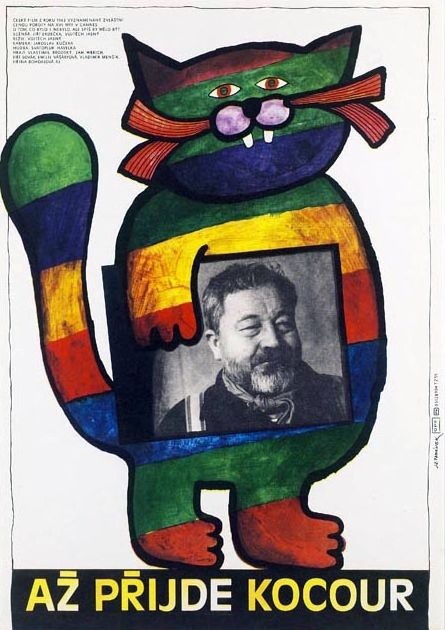 In a sleepy rural town, things are going as well as can be, with teacher Robert trying his best to give the kids a good education, but opposing him is the mean headmaster, who holds education and fun in little regard, and cares more about having people listen only to him, making his own pocket bigger, or in sleeping around. Things begin to change with the arrival of a magic act-A magician, his beautiful daughter Diana, and their intriguing cat...

Až Přijde Kocour, known in English as When the Cat Comes, or The Cassandra Cat (also The Cat Who Wore Sunglasses, and A Day, A Cat!), is further proof that the Czechoslovakians had very special taste in movies! Also that everyone there is named Jan. It focuses on a magical cat in sunglasses who exposes peoples' true nature. Given that fanciful description, I went into this expecting a kids/all ages fantasy film, and was a little surprised by what I did get! 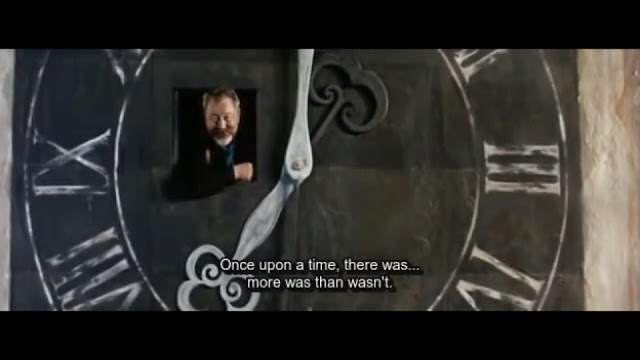 This isn't to say Az is a grim adult fantasy or anything. It's a child friendly-ish aventure full of magic, wonder, and the socialist system]. It also teaches good lessons for both children and adults, such as not blindly trusting authority figures to be doing the right thing, and for owning up to your mistakes and learning to overcome them, respectively. Even if they're not entirely subtle at times, they're important messages to send, and the movie does a good job of relating them!

The story here is a pretty packed one, with all manner of things going on. It's never dull, and I enjoyed just about everything, from the great character interactions, to the little stories that went on. 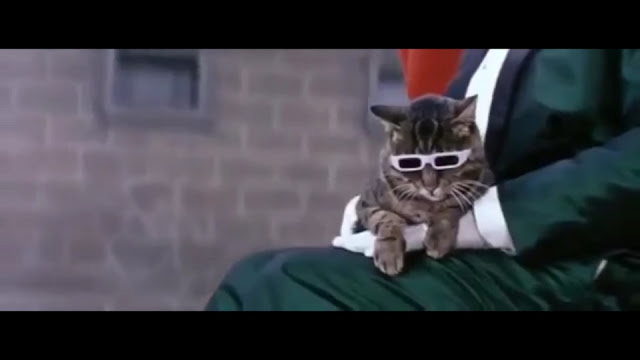 Where the film disappoints me is in the jumbled structure. There are so many little things going on, and they all get picked up then forgotten, picked up again, then forgotten. The kids for example don't show up properly until about 20 minutes in, and the same goes for the circus and cat, who appear even later! The blossoming romance between Robert and Diana is interrupted as well, along with many other things. The movie always drops one thread to focus on another, never giving anything room to develop. These are all good stories, for example the romance is very sweet, and the magical cat is adorable! But neither of those get the screentime they deserve. 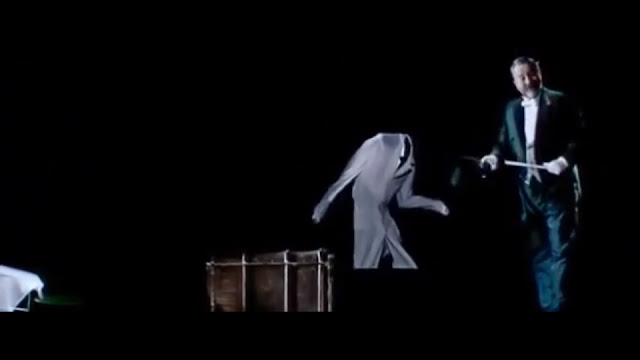 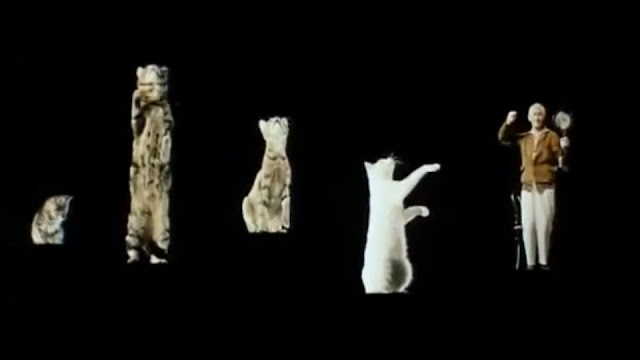 It's also far too long at 100 minutes! I'm not opposed to it being that long if these issues were ironed out, but as the film is, it's too much. 80 would have been more than sufficient. There are many long scenes without much dialogue, and these could have been easily pared down a touch.

The film's centrepiece is by far the magic act in in the middle, followed by a trippy multicolour sequence. It goes on for too long, but never intolerably so at least, and the magic section is a lovely treat! How'd they do it?? 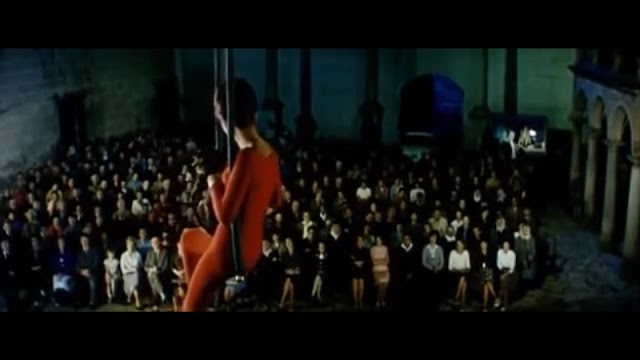 The dialogue in this film is often surreal and witty, with many funny and insightful zingers and repartee. I enjoyed this a lot, although some get a bit too obtuse, or come too many too quickly, leaving you reeling, struggling to take it all in. Still though, it's all appreciated.

There's a pretty big cast who are all introduced to us in a lengthy [introduction], which isn't strictly necessary since not all play a huge part, and it always worries you when you. Is this going to be on the test? The lead is young(?) schoolteacher Robert, who tells the kids all about the wonders of imagination and life, how to laugh, play, and learn. Naturally this earns the ire of the gormless principal, who demands Robert conform, and only teach the kids what he feels fit (which isn't much). Robert is a good lead, and you like him, and can admire his courage in the face of bad bosses and corrupt bureaucracy. 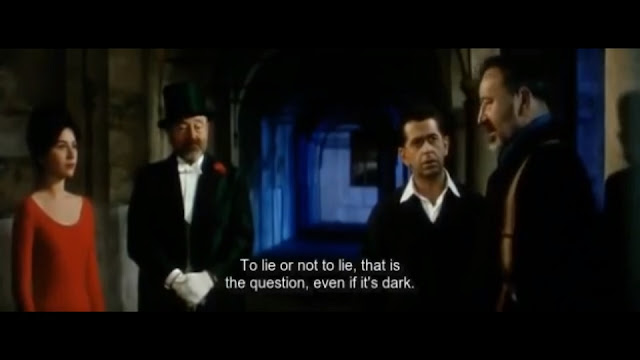 The other important player is Mr. Oliva, a fanciful and amiable townie who also narrates the film, from atop the rustic clock tower. The schoolkids are your typical children, sometimes naughty but overall decent. Then there's the circus troupe, the magician and his daughter. The spitting image of Comrade Oliva, he is like a mirror image in some way. Whether he's the same man or not is unclear, and the movie is deliberately vague on all that. The daughter Diana meanwhile is a divine beauty!

The villains here are a suitably craven bunch, all bad in different ways, from one malingerer who's always too 'ill' to work, to swindling crooks, cheating partners, and the principal, the worst of the lot. He covers pretty much all the deadly sins, and you look forward to seeing his inevitable punishment. 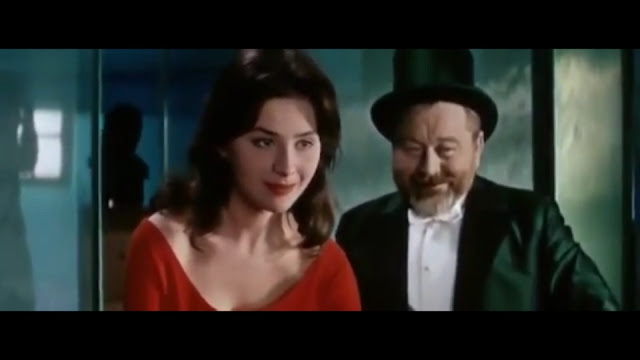 The actors all do good jobs here, from Jan Werich as the enigmatic Oliva and magician, to Vlastimil Brodsky as the simple but pure Robert, Emilia Vasaryova is alluring and friendly as Diana, while the actors playing the villains all turn in delightfully evil performances. The kids are all fine, and there are overall no real bad performances in the bunch. Lastly, the kitty cat who plays what I feel is the true main role does a good job! Give him a treat!

The effects are neat for what they are. Pretty simple, and very abstract, but they work. The direction is very good, with well framed shots, great location work and cinematography, and a real eye for beauty. The town comes alive under Vojtěch Jasný's seasoned camerawork. 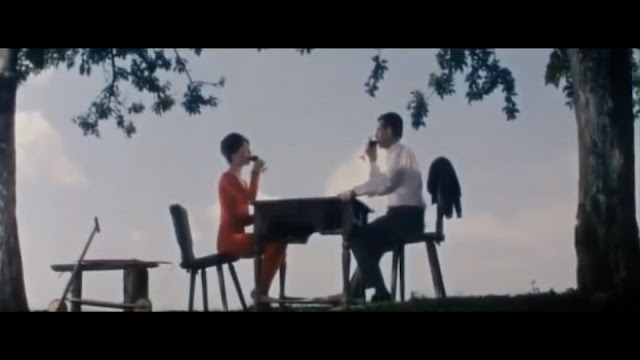 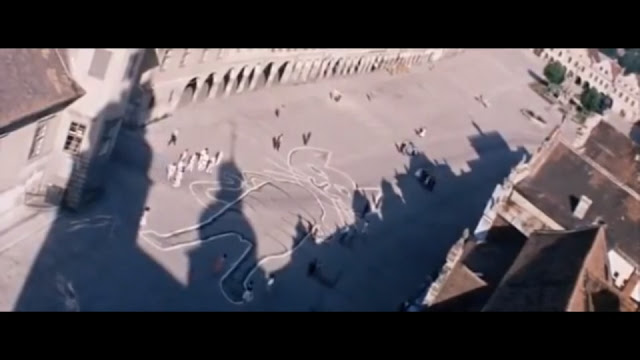 Až Přijde Kocour is a neat movie! It's not without its problems, but where else can you find a movie about a magical cat with sunglasses? That's right, I thought so. For that idea alone this film deserves all the awards it won upon its release. I recommend it, to you and your feline friends!...
Posted by Chris Hewson at 11:58 PM