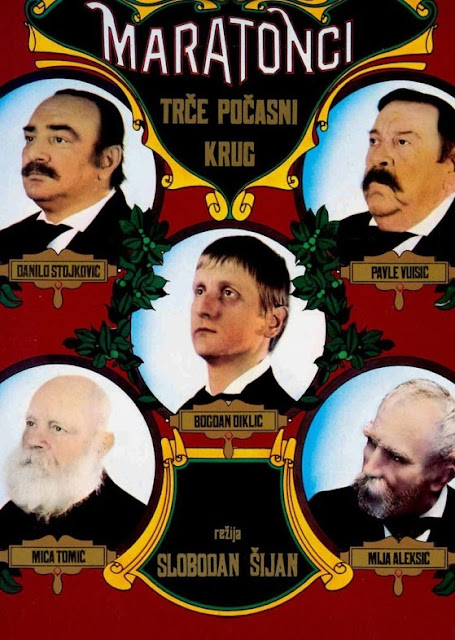 In 1930s era Serbia, the Topalović family funeral home has ran like clockwork for over a hundred years. From father to son it's passed down, and upon the death of the 150 year old patriarch, the family wonder what will come next. Meanwhile, a gangster associate Billy the Python is furious about not being paid yet by the Topalović's, and vows revenge. ... 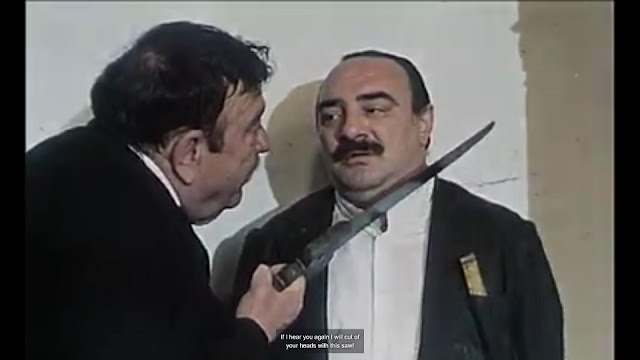 A film that's been recommended to my by Serbian friends for a while now is the lengthily titled Maratonci trče počasni krug, or Marathon Runners Do a Lap of Honour in English. Simply known as The Marathon Family, it's a wonderfully dark comedy, all about this crazy family of conniving, cheating, violent madmen.

This gets off to a great start, introducing us to its concept and characters in a really funny way. Who would expect 6 generations of men all running a business together? Naturally they're all at each-other's throats. From here on the movie continues showing us the players in this demented slice of Serbia. 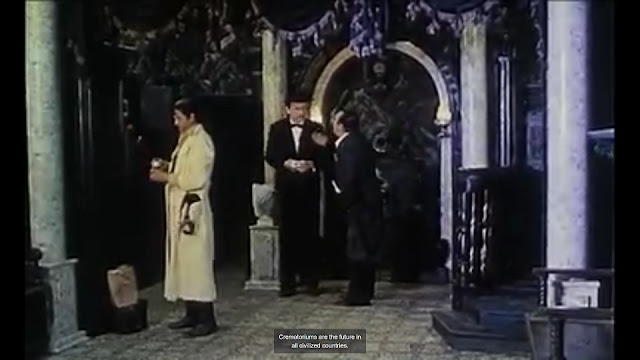 The tone in Marathon Family is really well balanced. It's dark, but never ridiculously so. Black comedies always need some light and silliness to be black comedies. Without it they're not funny, just black, and potentially unpleasant. Here though there's always a = goofy, almost playful nature, and you never take what's going on too seriously. From absurdly elderly relatives, to grandpas throwing TNT at police, and testing a crematorium with dinner/lunch, it's not meant to be a grounded movie, revelling in its =, but at the same time never going too far into becoming farcical. 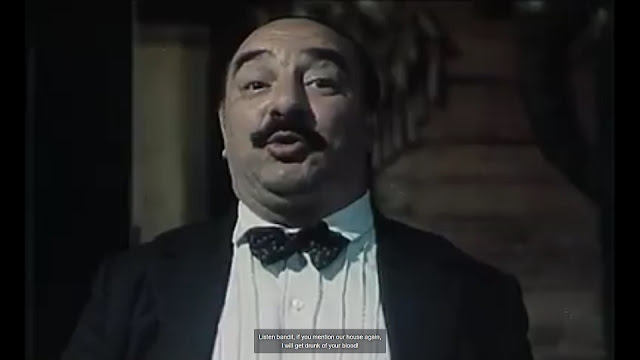 Another pitfall movies such as this face is the likeability of its characters. How enjoyable can a film be when you hate everyone in it? Thankfully this succeeds very well in its presentation of its cast. The leads all have their own unique flaws and idiosyncrasies, from the traditional grandfather, to the tradition-bucking Lucky, who's determined to get complete control over the funeral home, to the youngest son Mirko, who would otherwise be the most normal of the bunch (if a bit dim), if not for bad habits like spying on families to check the exact moment their relative dies. He ends up going off the deep end in a way that feels surprising but convincing, and perhaps inevitable!

The older members of the family aren't as rich as the younger ones, but are still entertaining in their own ways, and the maid/nurse is just as amusing. She's every bit as kooky and randy as some of these older grandpas, and is also perhaps the only truly nice character in the film. 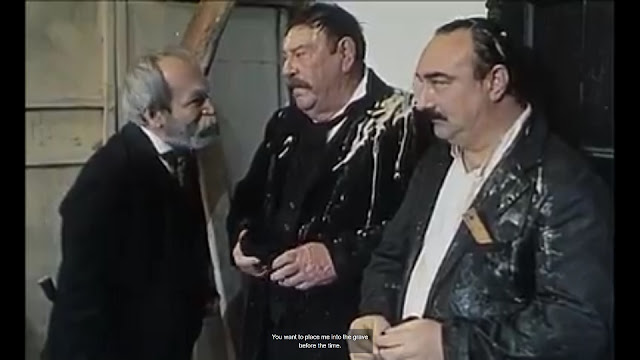 On one hand, Billy the Python is a no-good gangster, and would probably be well rid of, but on the other hand, he's legitimately not a bad guy in his quarrels with the Topalović family! The dude just wants what he's owed, and that's it, but they've gotta make things difficult, causing things to spiral out of control.

Kristina is a great addition to the cast. She's hilarious, fickle, and beastly. An ill-fitting match for Mirko, which is obvious to everyone but the boy himself. An increasingly out-of-work theatre hall pianist, she's bitter at the talkies for tanking her career, getting such gems of dialogue as "I shit on your tone films!". 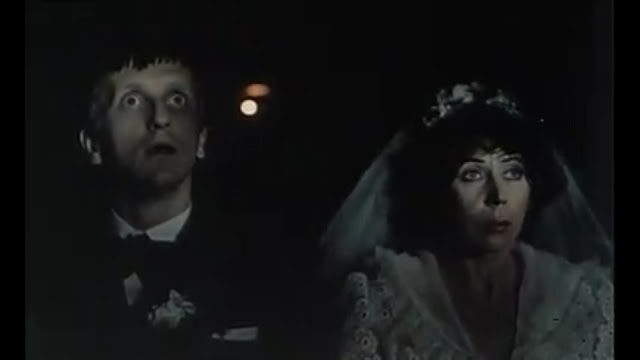 As the movie goes on she finds herself being seduced by the rogue Djenka, as well as gravitating towards him in equal measure, and more that I won't spoil. I also like how different she is from her father Billy. They're not just carbon copies of the other. On that note, I did find it a bit weird that she's his daughter, when she's 40, and only a couple of years shy of the other actor's age! Sister would be more convincing. 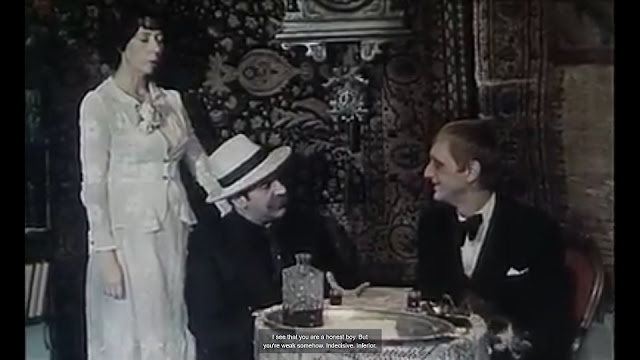 One complaint I kinda do have with the characters though is the sheer volume of them. There are 6 different members of this family. Since they're all kooky patriarchs of varying degrees of elderly, some either blend together a bit or aren't entirely necessary. But the actors all do fun jobs, and are = recognisable faces of Serbian cinema, so I    too harshly.

While I enjoyed the plot for the most part, there were a few personal hand-ups I had with it, though these lessened as the movie went on. There are a few long-ish stretches where the movie focuses onthis and that (such as Mirko's relationship with Kristina for example), and I found myself missing the family's antics, or vice versa. But these scenes are never bad or boring, and by the end I felt everything was all balanced well. 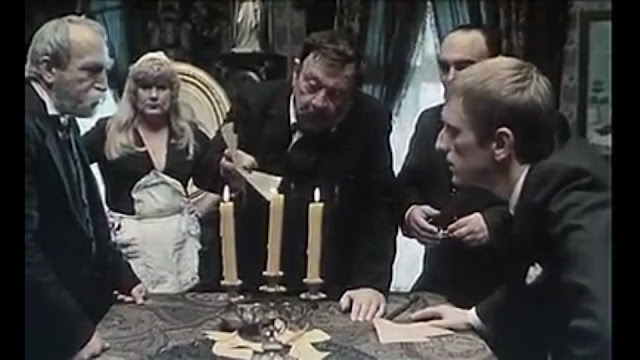 There are a few local things to note that foreigners might note, or on the opposite end of the spectrum, fail to pick up on. Firstly, there is a lot of swearing! Despite being from Eastern Europe, which was more traditionally conservative than the west, and despite being set in the 1930s, the language here is extremely colourful, in such a way as they've often talked. The Serbs have always been masters at the craft of vulgar insults, most often involving fucking, mothers, and =.

Another element is the film's intro during the credits, featuring real assassination footage of Yugoslavian king Alexander I. This is a pretty gloomy prologue, and its inclusion is perhaps pretty tenuous. I suppose one could argue that it symbolically reflects the then-current turmoil and violence that swept the country and people, while others might think that message could be gotten across in other ways.

The actors all do spectacular jobs here. All are crazy and over-the-top, and often in different ways. The highlights are Bata Stojković as Lucky, Bogdan Diklić as Mirko, and Seka Sablić as the coldhearted Kristina. She won plenty of awards for her performance and it's not hard to see why. 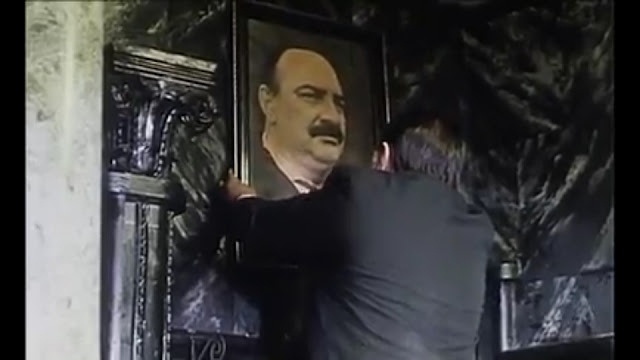 Overall, The Marathon Family is a great example of classic Serbian comedy. While not for the faint-of-heart, and not as cuddly as other Serb films might be, it stands high as a = of its genre, and still cherished to this day...
Posted by Chris Hewson at 11:59 PM