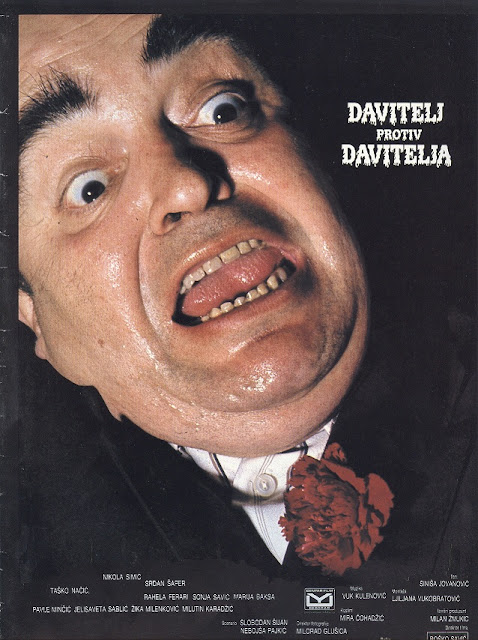 In the streets of 1980s Belgrade, carnation-seller Pera is having trouble witt his wares. Everyone keeps refusing them, and throwing the flowers back in his face, and eventually the strain from them and his overbearing mother becomes too much, and he begins strangling those who criticise his flowers. he police are desperate to find his new killer before there are more victims, but matters are not helped when budding rock singer Spiridon takes the story of the strangler for a macabre hit song, glorifying the murderer's behaviour/the man's murderous behaviour. Gradually the idea becomes an obsession for Spiridon, and the clumsy Inspector Ognjen may have two stranglers to contend with!...

Strangler Versus Strangler is a bizarre example of Yugoslavian cinema It starts off like a pseudo-documentary about the culture and people of Belgrade (in no ways that'll improve the Serbian tourist industry!). The narrator tells us all about the setting, characters, and what's happening, always feeling like a welcome presence, and an arresting start to a = movie. As the story goes on, this approach gradually fades into the sidelines, though never totally gone.

The story itself is quite simple, but it's the execution which is special. This takes inspiration from a few sources, but only as a jumping off point. This is a wholly/totally unique film, with very little like it. The tone is a real plus to this movie. It's consistently funny, with the film never becoming too weird or too dark. It always strikes a good balance.

The characters in Strangler vs. Strangler are a distinctive and hilarious bunch, with plenty to them. The main = is the psychotic Pera, with his various issues and =, compelled to strangle 'rude' women who hate his carnations or don't dress in the proper feminine way. Also weird is would-be rock star Spiridon, who's the goofiest looking nerd you could imagine! He's either the last person you'd expect to be a rock star, or a perfect example of how pathetic some fame seekers can be, with his slovenly and = demeanour, rude attitude, and using tragedy as a selling point for his new music.

Almost an Inspector Clouseau level figure, Detective Ognjen is hilarious. He's an insanely dogged detective, who ends up going further in both those attributes as the movie goes on, and the search becomes more desperate. He's quite endearing with how far he goes in catching the killer, even if he is totally clumsy and just a little mad.  Radio jockey/reporter Sophia is alright, and is a decent presence to the film, even if she's a bit too stoic/unexpressive at times.

The narration here is one of the best parts. The woman is simultaneously serious and funny, espousing loopy bits of 'wisdom'. Other characters are fun too, like the briefly appearing undercover policeman Rodoljub, Pera's unhinged mother, the woman at the sweets shop, and Spiridon's = parents.

Where I felt Strangler Vs. Strangler began to decline was in the ending. It already had a nice climax, and while it didn't definitively resolve the status of Pera/the killer, he's still been stopped, and his latest victim saved. [A romance has bloomed (a strange and completely unexpected romance), the badly wounded Pera retreats into =, and the proud Inspector Proudly shows off his new trophy as = of his successes with battling/opposing this killer.] Then the epilogue starts, and it's sweet at first (then naughty, and not to mention weird!), but then the movie just keeps on going! It takes a bit of a turn for the depressing afterwards, and I was wishing the movie had've just ended when it was supposed to!

The acting here is perfect. The performers all look great in their parts, from Taško Načić as the demented serial killer,  Srđan Šaper as the unwashed greasy rocker, and the great Nikola Simić as the tenacious detective. They deliver lively performances all round.

The music is another high point for the movie. The instrumental tracks are great at building up a spooky atmosphere, other tracks fit with the more amusing scenes, and there's rarely a dull moment [musically]. The most notable piece in the film is of course Spiridon's song, and this is somewhere the movie might've had/ran into some trouble. It's gotta be a convincingly grungy and amateur quality song by this uncharismatic dweeb, but they've also gotta have it be good enough to be legitimately pleasing to the ear, so we understand why Belgrade likes it, and so we don't [feel the need to] tear our ears off when hearing it again and again. I found it quite a catchy tune! [I also get the best of both worlds, getting to sing along without coming across as creepy, because I don't know the words!]

There's a lot to like about Strangler Versus Strangler, and while I was disappointed with a few things about it, it's a great example of the weirder side to Yugoslavia. But don't let it deter you from going on holiday to Belgrade! You probably won't get strangled!...
Posted by Chris Hewson at 11:58 PM