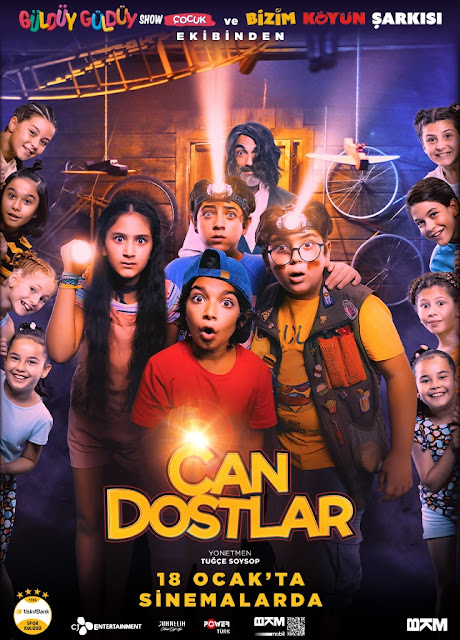 Beste is a young girl frustrated with her dreary life. She's recently moved into a new neigbourhood, but the park outside her window is always empty, and her perpetually working parents aren't doing anything to help. Deciding to take matters into her own hands, Beste starts going door to door and inviting other kids to play. She successfully gathers/succeeds in gathering a sizable group, but their plans are hampered by the park's tenant, an angry recluse who wants the place to stay empty. Determined to help each-other with their problems and defeat their new enemy, this previously quite neighbourhood has its hands full!... 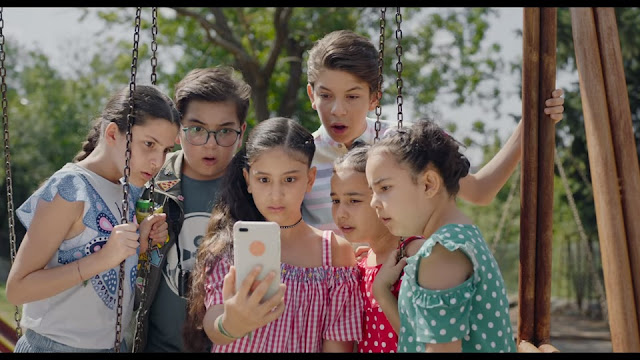 Can Dostlaris a highly entertaining kids movie, courtesy of Turkey. Getting off to an eye-catching start with a choreographed song and dance, it draws you in quickly, and delivers what it promises.

The movie is never boring, and has a very good structure. It sets everything up quickly, has a good main conflict, and there's always plenty of other stuff going on. The film is never solely focused on one thing, and has a 'slice-of-life' feel to it. Events and revelations come at a good pace, and the last act is less one big climax, and more a few little ones, that add up to something nice.

Certain story beats and ideas are pretty   (for example, we all know Kazım is gonna turn out to not be so bad after all, but have a tragic backstory, and redemption), but they're done so in a good way. Even if they seem familiar, you don't mind, and look forward to seeing how it'll play out. In movies where the outcome is even somewhat obvious, you've gotta put just as much effort into the journey getting there as the reveal. 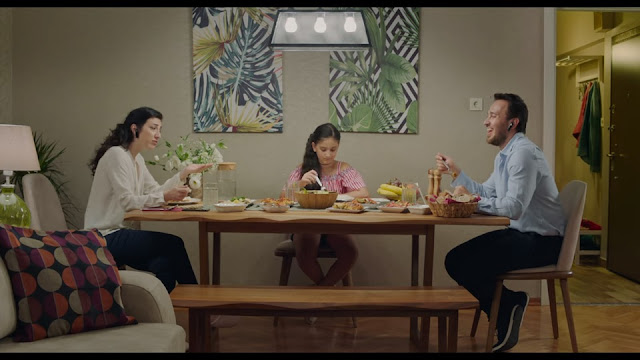 While some elements here are familiar, others are refreshing and unexpected. The movie has a nice frankness to it amongst its lighthearted goofiness, and there are good/effective messages and themes. Such as seizing life while you're still young, overcoming grief and pain, and about one never being too old to play. You really get a good sense of community, and how one person can make a difference. If this one girl hadn't gone around door to door, none of these positive changes would have happened.

Another thing I like is how healthy these kids' interactions are when compared to American films. It's like night and day! The Yanks could learn something here! 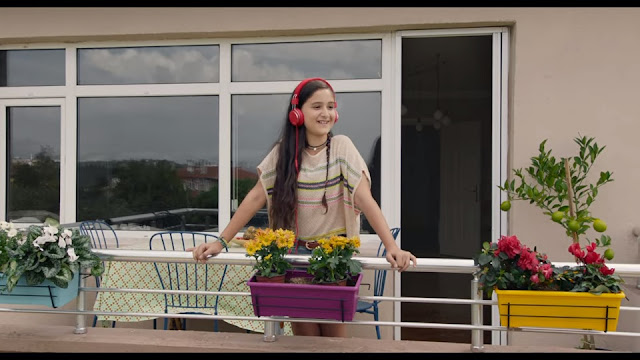 The characters are a major part of Can Dostlar, and there was a chance for this to go very well or very badly. This is because we're treated to a pretty sizeable cast! There's Beste, Cem, Ozan, Fatoş, Doğa, Fırat, Eda and Seda, Eraydın, Atlas, and that's just the main group! There's even more kids in supporting roles, and all the adults to boot. It's a testament to the film's writing and direction that it's never confusing or messy. While there are some moments where I was a little unsure of who was who, or other times when characters were absent for a while, no-one feels underused or interchangeable, for the most part.

Something else the movie does effectively is rotate its characters. Rather than focus exclusively on one to the detriment of all others, or try and focus on all at the same time, it revolves around the group gradually. And whenever new characters are in the mix, other ones are shifted elsewhere doing their own thing. For example, when we meet the diabolical Ayberk, it's not as confusing getting to know this new character as part of the gang when a couple of them are busy elsewhere for the moment/time being. 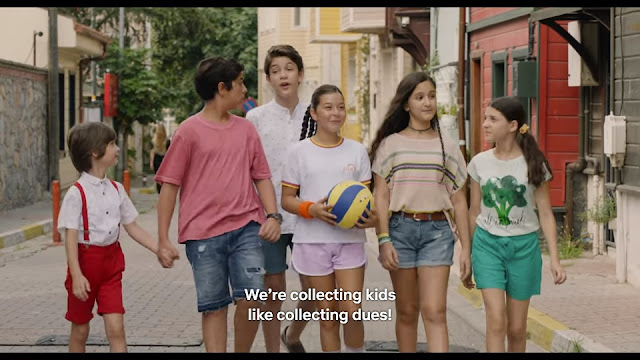 Onto the leads specifically, Beste is a great protagonist! Adorable beyond words, she's also friendly and clever, a good influence to/on all those around her. Cem is cheeky but nice, but a little too untrusting regarding some people. Newcomer Fırat is a neat and snarky kid, but seemingly has something to hide. The twins are a great mix of funny and scary (don't mess with twins!), while Doğa is nice and sweet, and Eraydın is amusingly neurotic and a big eater, without coming off as gross or gluttonous.

The passionate speed-talker Fatoş is energetic without being annoying, and I liked her environmental/recycling crusade. The only one who gets the short end of the stick is Atlas, since he's introduced as being a super hyper kid, but this is never seen again, and he's pretty much normal for the rest of the movie. Overall though, every kid here has at least some distinctive character trait, and some depth and emotion too. 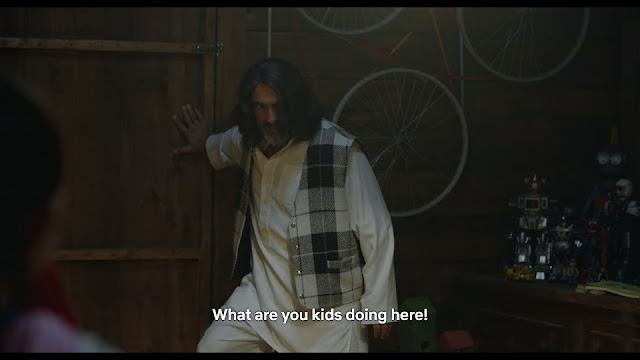 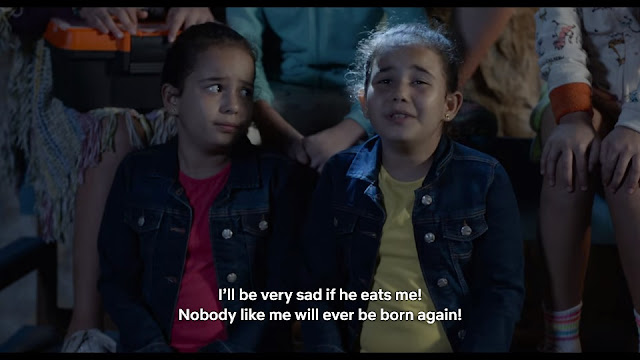 'Bad' Kazım is a good villain, being mean enough that you root against him, but not so bad that he's genuinely horrible. He's also gets times that you get a sense of his unease and inexperience with the outside world, endearing him. The supporting and minor cast all get a good amount of screentime, never hogging the limelight or getting too little to do. Highlights are the shopkeeper and his daughter, who make their scenes really count with their hilarious advertisements and songs, and the adult impersonator (I wonder if that was a real talent, or just the magic of movies!). 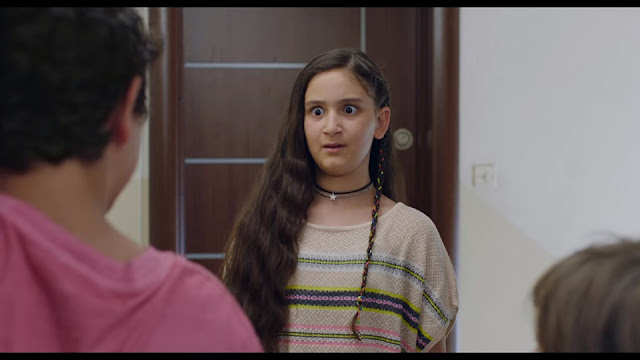 The cast here all do a great job! They're a little over-the-top sometimes, and not all deliveries are perfect, but by and large they're a joy, especially given they're younger actors and actresses. No cringey performances here!

The music here is fun! We've got lots of nice tracks all throughout, with the highlight being the peppy main theme, which opens the movie very well, getting you in the mood. 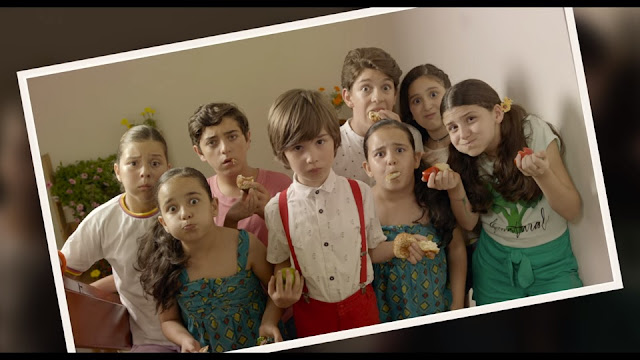 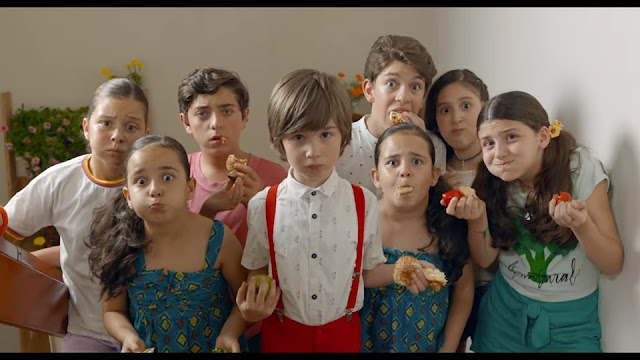 Can Dostlar is a great time for the whole family, and I'm sure it could be a favourite for many kids. I recommend it for those interested, and can guarantee 90 minutes well spent...
Posted by Chris Hewson at 11:59 PM