Yugoslavian cinema has had a lot of varied chapters, and while I've only seen but a few, I've already run the gamut! From harmless family fare, to bizarre experimental films (and fun ones: big difference!), raunchy sex comedies, and depressing Oscar bait, there really is a stunning diversity. Today's film, Tango Argentino, is a great example of a few such genres in one...

Nikola is a young 12 year old saddled with adult responsibilities. While his parents work multiple jobs each to save for their dream home, and support their ailing daughter, Nikola also has a lot of duties, and this lifestyle has ingrained a very workmanlike personalty, always thinking of the best way to make the most. During his work he meets elderly singer Julio Popovic, and the two strike up a unique friendship, giving them both something to brighten their lives... 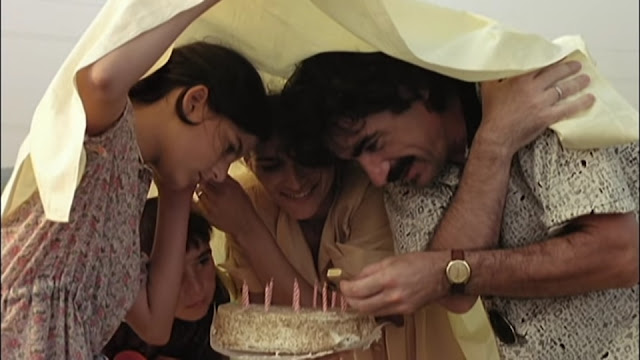 Tango Argentino is a really good drama. The story is an emotional one that  The tone is sad, but also happy. The first half introduces us to the lead character's unglamorous life, but things are never so dour that you lose hope or feel like drowning your sorrows with a keg of booze. Things pick up in the second half, and while things are never super happy, the tone remains consistent, as well as funny in places.

The characters are very well crafted here. Nikola is a great protagonist, mature and likeable. He's still a boy, but he says and thinks in such adult ways sometimes because of all these responsibilities that have been thrust upon him so unfairly. There are often times where he's more responsible than his parents! Onto them, they are a couple of prize assholes! They're not gonna win any awards for best parents of the year. The mother is somewhat inattentive and resigned, not actively bad but is sill fine leaving her son all these tough jobs. The father meanwhile is a lazy dope (and yet has four jobs!) and a loser, who can't keep it in his pants. He's rubbish at making excuses, keeping appointments, and smooth talking. What I like about the characterisation here though is that while these two aren't the best, they're not presented as one-dimensionally bad either. They come across as convincingly human as a result. 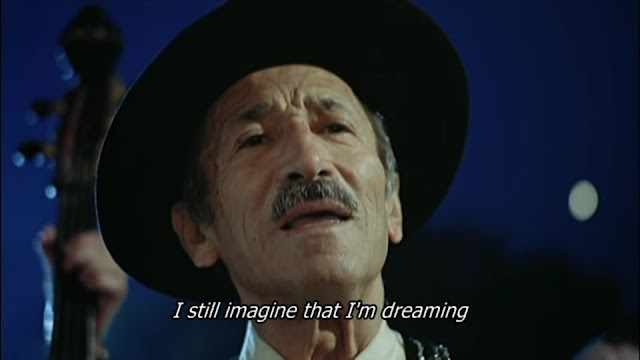 The oldies meanwhile are a fun bunch. Julio Popovic has the most attention, and he's a neat guy. Always lively and adventurous, he and Nikola strike up a good rapport. He also has good chemistry with his fellow senior citizens. The garrulous major is a fun presence, while the grouchy and closed-off Galic is hardly the picture of friendliness at first, but soon becomes a tight-knit member of the gang, getting a few emotional moments with Nikola.

The remainder of the cast is good (especially the friendly dog!), though some are a little underused. That leads into my only real complaint with Tango Argentino. Some characters or plot threads are dropped, and never addressed again. Nikola's sister, for example. We never see her again after her trip to the Bulgarian faith healer, and far be it to belittle or besmirch the proud name of Bulgarian faith healing, we can pretty much imagine how that went. But still, it's a pain she never shows up again. It'd be nice seeing her relationship with her brother further explored. 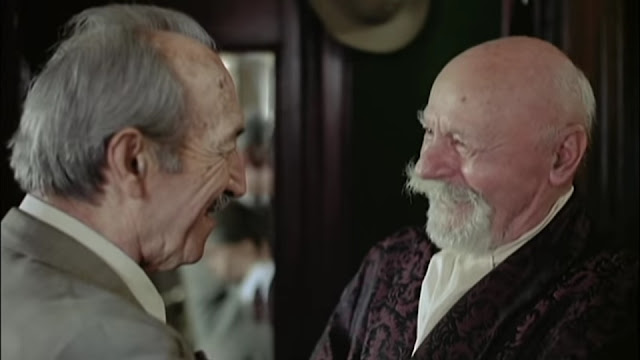 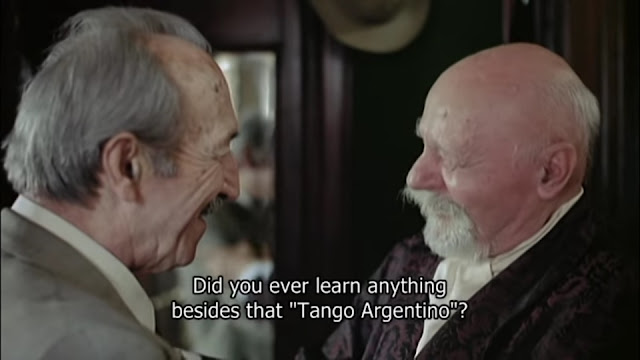 The popcorn machine plot thread is also never resolved. Frustratingly it kinda actually was, but the movie overextended that sorry. Instead of just ending it when he gets it, it has to drag it out, and ends things there on a not so happy note.

Lastly, there's not much in the way of a solid ending to the family plot. This is a little annoying, however it's not a huge deal, as the important stuff is all wrapped up to perfection. The emotional core of the film is Nikola's friendship with Julio, and the ending of the story in a way [reflects the ending of this =]. This is handled in a really nice way, and the beach trip is a sweet ending to the movie, and a great culmination to Nikola's character arc.

Tango Argentino has a few running themes throughout, from the relationship between the old and young, as well as the identical troubles they face, often needing guardians, or not being trusted as much as adults. We also see the greed, laziness, and other negative traits among many here, which both old and young have to bear the brunt of, often unable to fight back. But thankfully Nikola represents the future, so it's not all pessimistic. 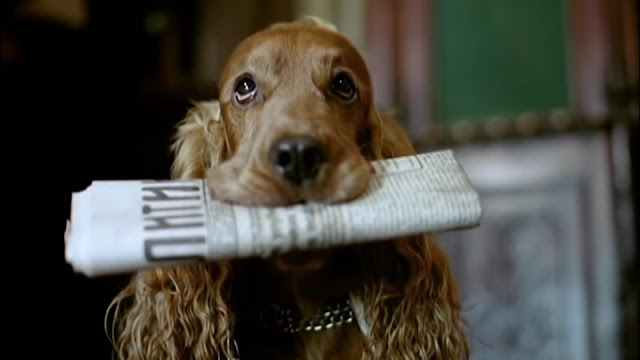 The soundtrack here is a nice one. There are slow and melancholy tracks, and swanky tangos. The titular song is a very good one, partially reprised here and there, and has some instrumental rescorings which add a lot. Something a little strange is that a movie with such an interest in music really only has this one song, but I felt that said tune successfully permeated the entire film, and gives a nice atmosphere. Well, until the last 20 minutes anyway, when I felt the rising urge to remind the filmmakers that there are more songs out there. This is never an issue though.

The actors all do great jobs here. Nikola Žarković is a good lead, and his age is never once a problem. He successfully embodies his character's adult personaliy, while also retaining the emotional and whimsical spirit of a child. Famous Yugoslav singer Mija Aleksić is equally good as Julio, delivering a jovial performance, ill and on the way out maybe, but full of life and good cheer.  Miki Manojlović is a bit too successful in his performances as a greasy deadbeat, effective but a little unpleasant, while = does a good job too as the trying but failing mother. The rest of the cast are nice, from the snakelike dirtbags, to the remaining golden oldies. 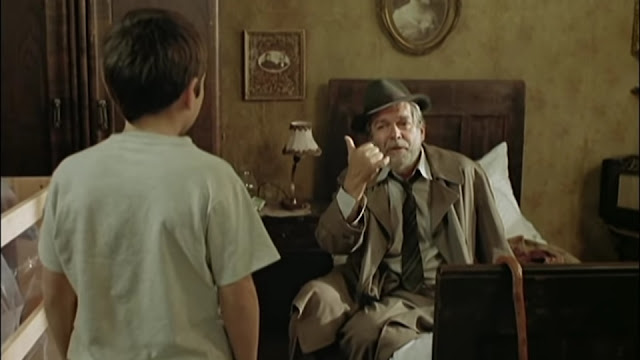 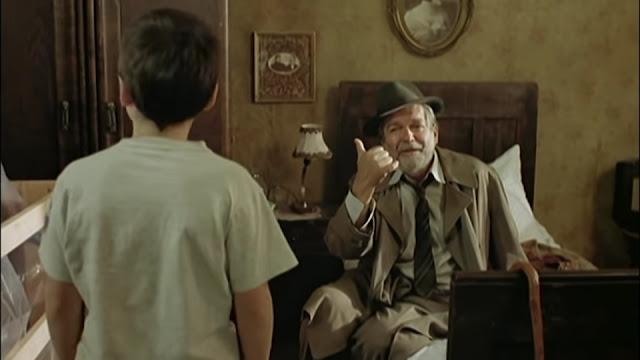 Director Goran Paskaljević does a great job here. He shows the grime and dirt, with some good visual satire. Enough to send a message and make you laugh, but nothing in your face, or aggressively unsubtle. Everything works perfectly, and it never felt like he was making the country out to be worse than it was, but just showing things how they were, also showing good sides.

There are two things to note about Tango Argentino. The first is that filming wrapped up mere days before what can charitable be termed as a pretty bad time. Managing to film and complete the movie just before a war broke out is a pretty impressive feat! And lucky to boot. Another nice fact is that Aleksić, who had been long since out of work during his twilight years, started out the production in not that great condition, only working a few hours a day, but gradually improved to the point where his doctor's advice from then on was 'make more movies'! 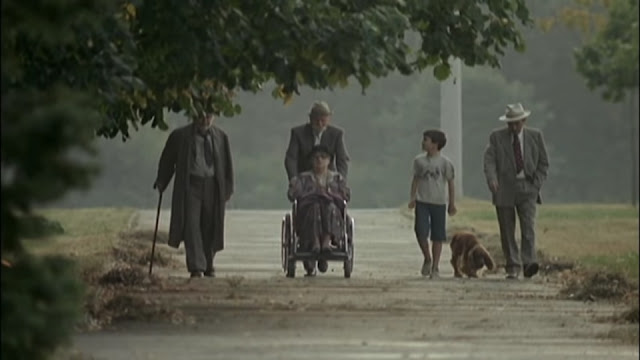 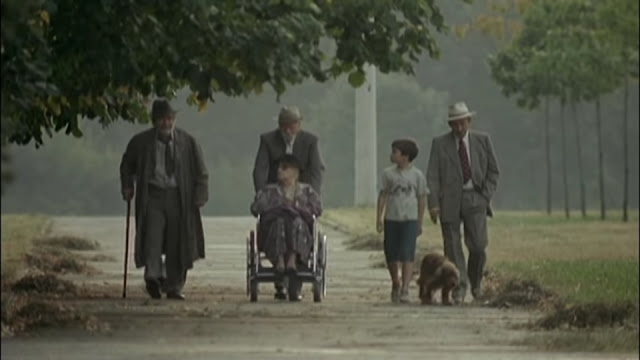 Tango Argentino is a great character and country study, showing off an honest and unflinching but also happy and optimistic portrayal of life. It's for sure worth a watch...
Posted by Chris Hewson at 12:13 AM