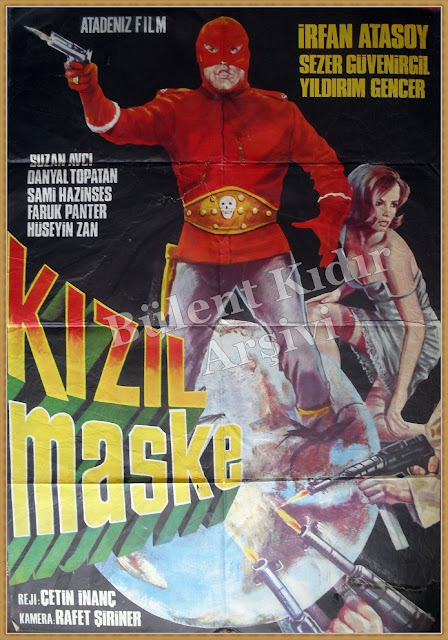 Kızıl Maske is one of two adaptations of famous comic hero The Phantom (renamed Red Mask in Turkish, and palette-swapped from suffragette purple to red) to come out in Turkey in 1968

The daughter of noted scientist Asım Bilginer has come to the powerful hero Kızıl Maske, asking for help. Her father has been kidnapped by a cadre of nefarious gangsters for his new discovery/creation of a size-altering chemical. It's up to the fearsome Kızıl Maske and his partner Sezer to save him and stop these villains. Evildoers beware the Turkish Phantom!... 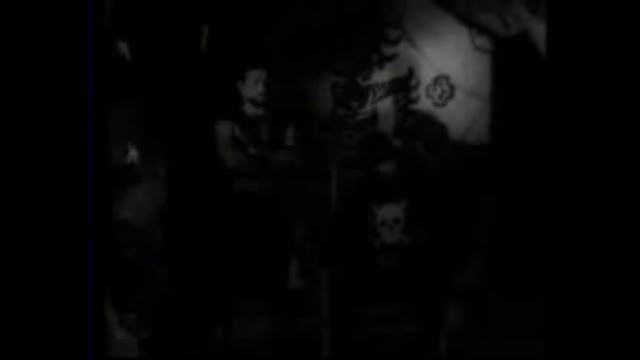 Kızıl Maske is pure popcorn entertainment. Very little plot to speak of, and the proceedings are really only an excuse for an hour of brawling. This makes the movie a little boring, but it's still a mildly fun watch. The upside to this is that it makes these kinds of movies very easy to understand for those who don't understand Turkish or have the luxury of subtitles. Also, props to these movies for working within their means! Kızıl Maske may be obviously low-budget, but it sets out only to show what it can do, and because of this, the movie ends up looking convincing for what it is! There's also a genuinely impressive effect in one scene, which is the kinda thing even movies nowadays have trouble with. 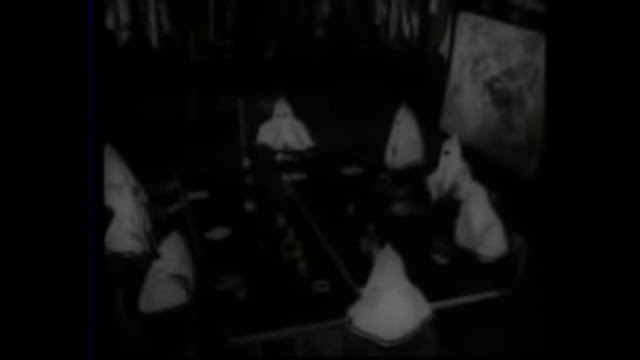 The hero, played by İrfan Atasoy, is a decent do-gooder, who has the skills to fight the baddies, and knows all the right ways to woo the ladies. It takes this incorrigible hero only twenty minutes in before he and the woman who came to him as a client start to hit it off. Also, there's one amusing scene where as is the norm in Turkish action flicks, the heroes casually chat after a fight scene, while in the same room, still surrounded by the now-defeated henchgoons! At least this isn't as bad as in Demir Yumruk, where the two leads went off to have a shower in the same building while the villains were still around! 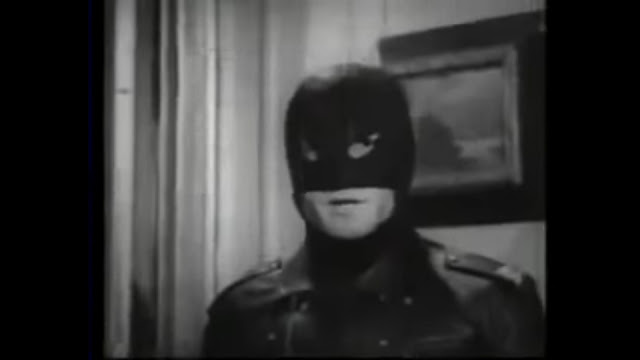 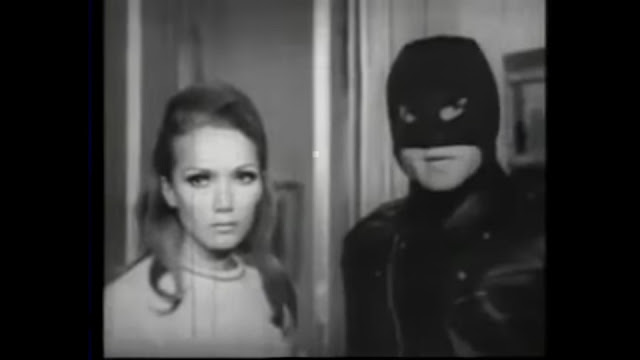 Since Turkish movies of the time didn't really have concepts of secret identities (I have no idea why!), we see the heroes unmasked more often than not. This is no exception, and it's even more annoying since in the comics we NEVER see the Phantom's face. With that in mind it's a bit annoying that we see it so much here, but I guess I can't be too annoyed. It's not like every other Phantom adaptation hasn't done just this. *sigh* Thankfully the two heroes fight in their costumes a lot, which isn't always the case in these old Turkish superhero vehicles. Costumes were usually seen as optional, but here, not only do the two protagonists wear them for most confrontations, but they're well-designed and distinct from each-other, too! 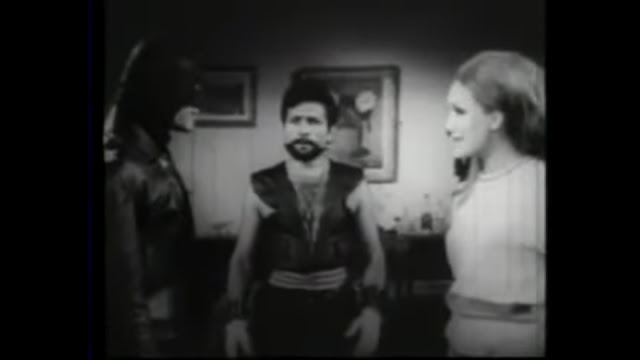 Onto the villains. The main baddie is Al Capone and...why are you looking at me like that? No, not that Al Capone. The guy is also called Arif, so maybe if I completely understood Turkish, I'd have seen a scene where it's explained that he's a crime lord who adopted the infamous American gangster's name in an effort to sound intimidating. He's an ok villain, but a bit dull. His right hand dame is Suzy (played by Suzan Avci, who was also the villain's moll in the Kilink movies), who unfortunately doesn't really get much to do. Finally, there's Fu Mançu! Again! Hooray! Nice to see the Turks picking up the western world's slack and letting the great character of Fu Manchu have some more time in the limelight!...Sadly this film doesn't impress on that front. I was about halfway through the movie when I checked out its IMDb page and saw the archfiend's name in the cast, much to my surprise. I was wondering where he was, because we hadn't seen him, or at least not to my knowledge. Then, after a couple of mentions, he FINALLY appears in the final act, and is just a random pudgy guy in a suit with sunglasses and a hat. He's an associate of the villains and that's it.

As an adaptation of The Phantom, this has both good and bad qualities. On one hand it jettisons quite a bit of the mythos, but on the other hand, the story is spot on! The Phantom stopping the crooked schemes of gangsters is what he does all the time! It also keeps enough elements that for the first twenty minutes this is almost recognizable a Phantom movie. We see the Skull Cave, someone journeying to the cave entreating help, and what I think are skull marks in one scene. As the film goes on though, you kinda forget it's a Phantom movie as all we're seeing is this guy punching gangsters. 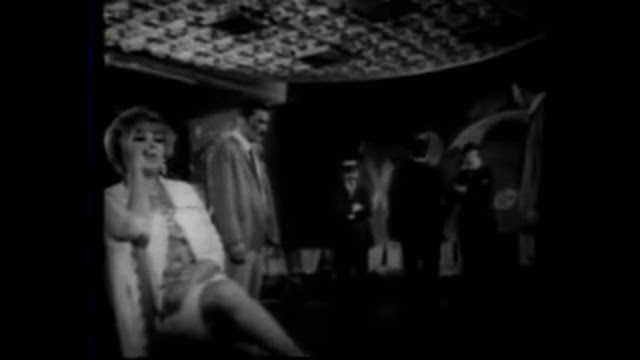 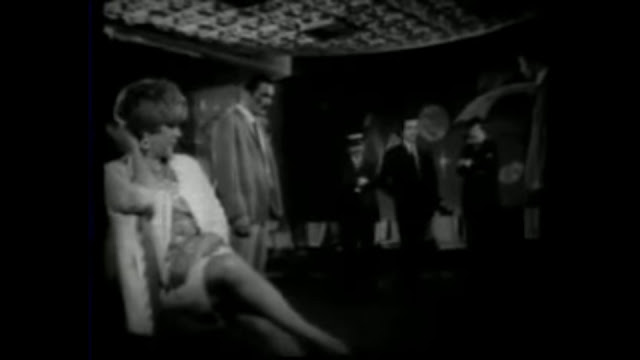 Moving onto the lead's costume in greater detail. It's decent, if a bit basic, and the mask doesn't hugely resemble the Phantom. Given the black-and-white nature of the film, he might as well be wearing black. I'd really love seeing set pictures of Kızıl Maske, and see what colour the costume was. Perhaps it was red, or maybe the filmmakers, knowing they were shooting without colour, just made the costume a simple black or something. One positive to the low film quality is that it really helps in making Kızıl Maske blend into the shadows, even if in a brightly lit room!

While we're on that subject, I wonder how much of the low quality is due to the film stock in use, and how much is due to the decay from improper storage. Were any of these pulp films in high quality on release?

There's one weird editing moment where I think what happened was a villain jumps off a building's ledge before he could be pumped for information by the heroes, but there's a bit of an editing screw-up, so all we see is Kızıl Maske punching him, and the baddie going over the railing to his death! I think that's what happened, though it could be exactly what it looks like, because the heroes of this movie don't exactly have a problem with excessive force.

The acting all seems ok. There are quite a few daring stunts on display in this movie, and one scene on top of a train that made me wonder if Turkish actors in the 1960s had health insurance. Hell, I wonder if there was any health insurance for actors in America at the time! 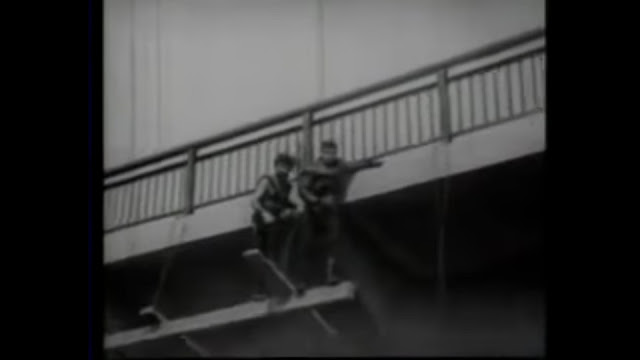 The music in Kızıl Maske is cribbed from a few different sources, the most notable being James Bond. The movie is particularly in love with one particular piece, which it constantly reuses, even several times per fight scene! It gets a tad overused! As for its origin, it sounds familiar but I can't place it.

While we're talking about the scoring, there are delays in it whenever people are punched. Thankfully this isn't present all the time. It seems like halfway through shooting the sound editors figured out how to overlay the foley work properly. The end result is that in the first half there are hilarious fight scenes with loud rousing music that pauses every time a punch is thrown (and many are thrown), while in the latter half the score continues uninterrupted. It's still not perfect, and a punch here and there pauses the music, but overall not terrible. 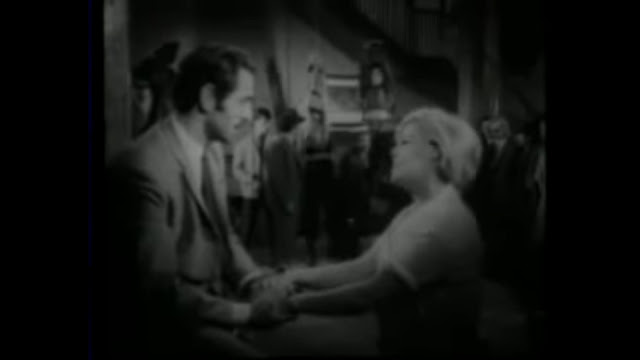 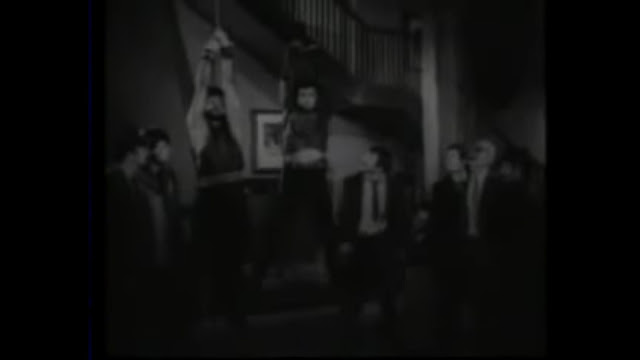 One final thought before I wrap things up here. I like to think all these Turkish pulp hero movies are set in the same universe, so the Fu Manchu present here is the same one from Demir Yumruk: Devler Geliyor, and in one corner of Turkey is Kızıl Maske fighting kidnappers, in another is Batman stopping murderers, while Superman patrols another, Kilink plots his evil schemes in hiding, and Altin Çocuk globetrots across the world stopping supervillains vying for world conquest!

I'm not sure if I recommend Kızıl Maske or not. On one hand there's nothing in this movie that you can't get better in Demir Yumruk: Devler Geliyor/a dozen other pulp   , but on the other hand, it's not bad, and is at the least an interesting example of foreign Z-grade cinema. 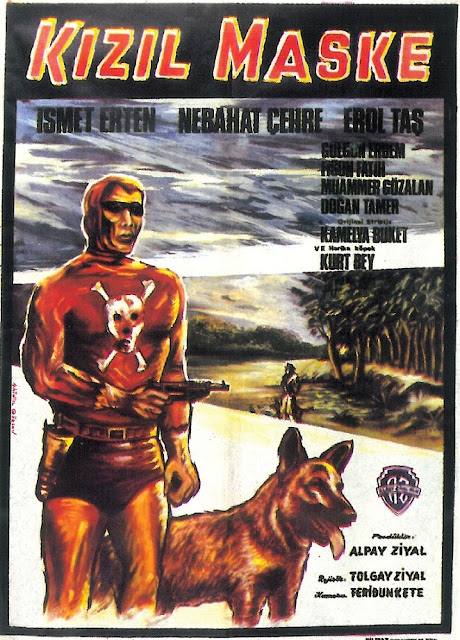 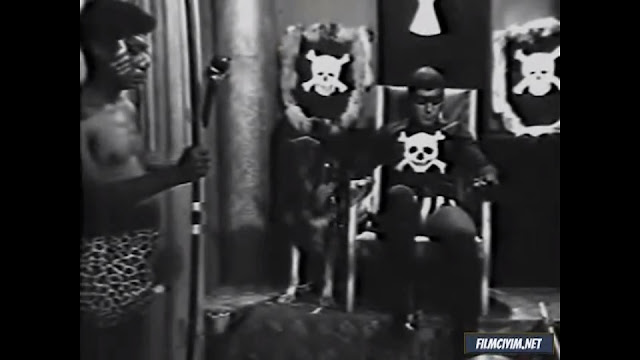 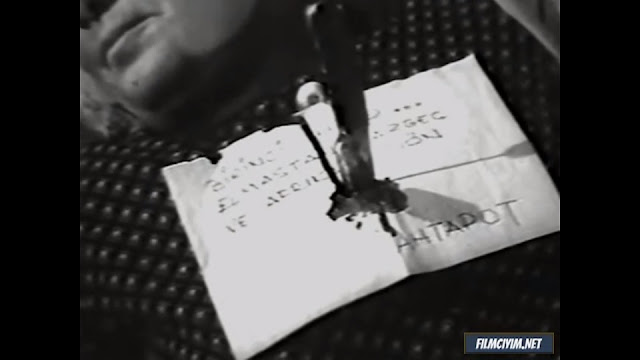 This iteration of Kızıl Maske is a real treat! Whereas the previous one was The Phantom in name only, this is unmistakeably the real deal! Its hero is never out of costume, and not only wears an authentic outfit, but also the authentic disguise too! Other elements are all here, from Diana (even called Diana, rather than Alev or something), and Devil (here called Şeytan), and the jungles of Africa too. I think this might be the best adaption of The Phantom we've ever received! Not to be too critical of the 1996 iteration, as it was  stayed true to the purple outfit  pulpy 1930s feel

The story here is pretty basic stuff, really only an excuse to string the action scenes together. As a pretense for this, it works well enough. It never tries being anything it's not, and never feels lacking either. 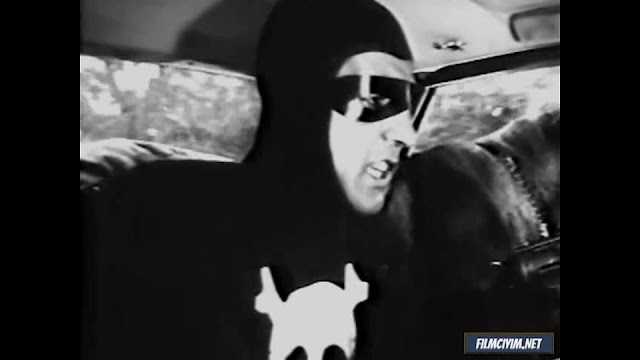 The film always moves at a brisk pace, and the hour long runtime is more than sufficient. The only exception is the soul-crushingly long time it takes the hero to take his boat to the villain's.

The characters in Kızıl Maske fill the expected archetypes, but in a fun way. The titular hero   He is a bit of a Casanova, although given the fact that the evil woman he bangs dies immediately after, we can think of it as a last gift. His girlfriend(?) Diana is nice enough, and not too useless. The femme fatale is suitably devious and wily, with a hint of =. 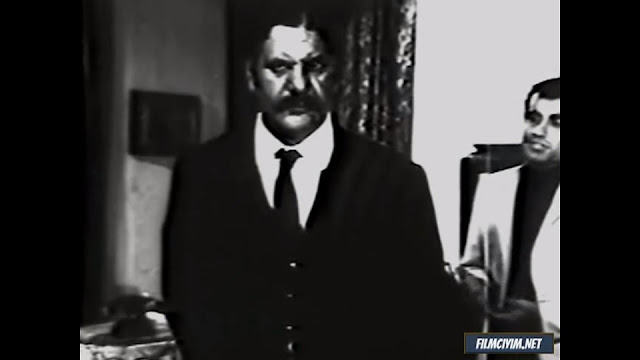 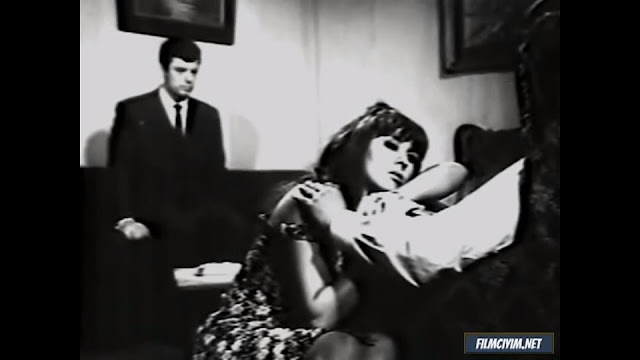 And lastly there's the main antagonist. He's reminiscent of Blofeld from the Bond series. Always seen from behind, cloaked in shadow and stroking his pet (in this case a woman, not a cat! Oh my!).   Now this brought a bit of confusion for me, as one of the heroes' allies is OBVIOUSLY the villain! He's got the stone cold glare, sinister voice, even menacing eyebrows!! And yet he's not, but some other guy cloaked in shadow? I was confused. Why hide = if you're gonna be that unsubtle about it? Sure enough, he is, and we're supposed to be shocked by it. It all seemed so obvious that I thought there'd be a twist, but nope. Ah well, it's still fun = 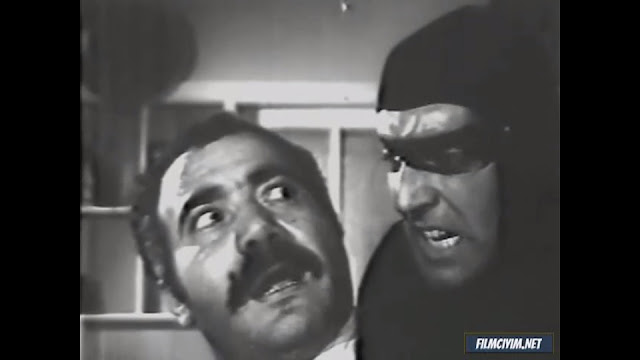 Not a film to feel understuffed, there are yet more villains here, in the form of an Arab gang. They interact a little with the plot, but not a great deal, and their stuff is never resolved. We even see one of 'em snooping on the heroes at the end, watching as Kızıl Maske gets back on the plane home. I was expecting something to happen, but then the movie just stops/ends. It doesn't look like there's a scene cut, and we get a Son title card. Maybe they were just setting up for a sequel? Well one does exist, though I don't know if it's to this particular Kızıl Maske film or another one, because god knows there's multiple choice! 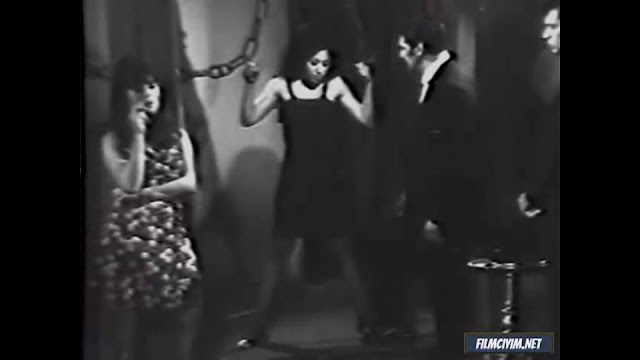 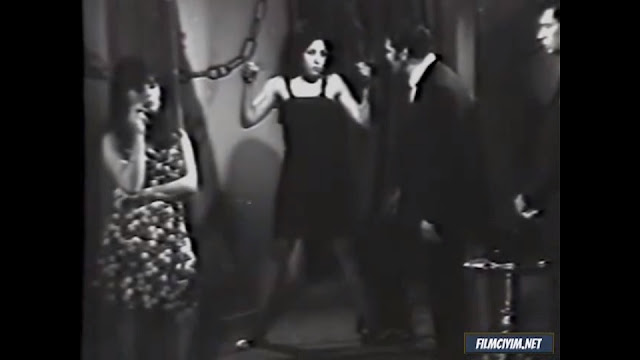 The fight choreography here is quite good! Some of it is just flailing around, but we've also got/we're also treated to =, neat stunts, and great action moves.

The music here is groovy! We've got lifted tracks from Batman, and also a delightful rendition of Secret Agent Man! There's also a neat original song that a nightclub entertainer sings. These tunes go a long way to making the movie fun  It's still effective even without them, of course, but they really make the movie excel. 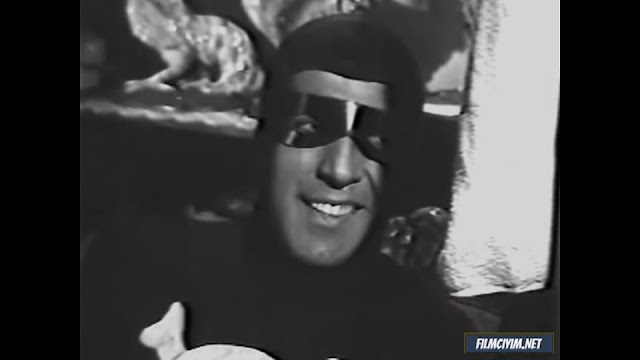 Kızıl Maske is a great time for fans of Turkish pulp cinema. A lot of these movies can blend together, and not all are necessary to see, but this one is! It's a real treat. If only it were easier to find! Did you know the two halves of this post were written two/2 years apart?...
Posted by Chris Hewson at 11:57 PM