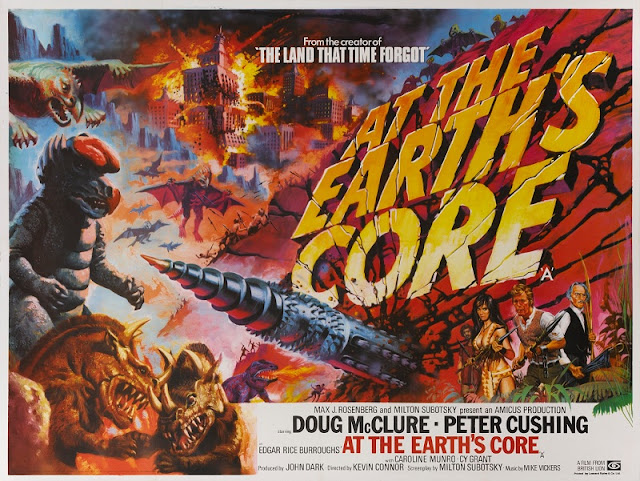 Edgar Rice Burroughs had a rich literary history in pulp fiction, creating such iconic characters and locations as Tarzan, John Carter of Mars, the Land That Time Forgot, and the hollow earth known as Pellucidar. Compared to his other books his one hasn't seen quite as much attention =, but in 1976 it received an adaption courtesy of Hammer rival Amicus. 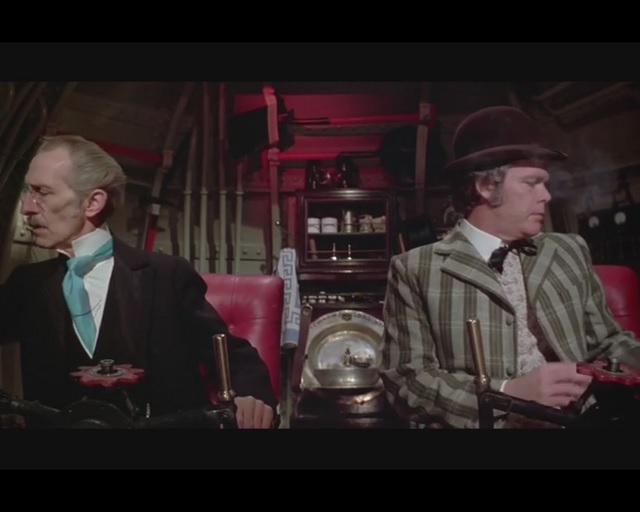 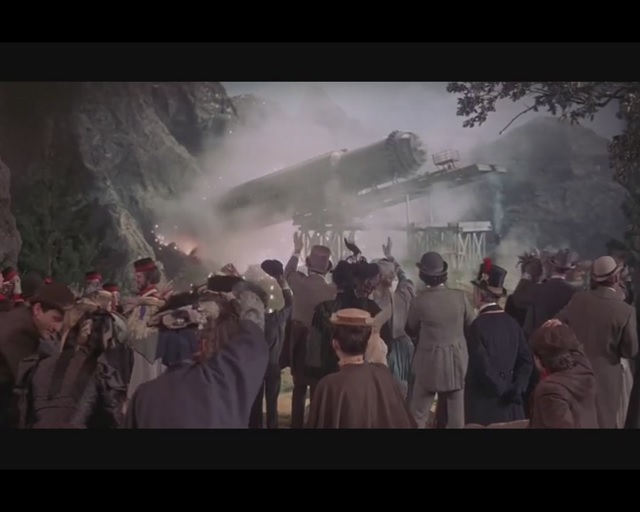 Adventurers David Innes and Dr. Abner Perry are testing a new machine for the public-A giant tunneling drill that can dig its way from one end of the earth to the other. Things seem to go well, until a malfunction sends the drill off course, and the two find themselves in a strange new land. Surprised that they're alive, they search this place, which they quickly realises isn't Earth, but the inner land of Pellucidar, occupying the centre of the planet. Here dwell savage cavemen, dinosaurs, and the brutal reptilian race the Mahars, who keep the humans as slaves, with the help of the monstrous Sagoths. With all these threats facing them, David and Perry are determined to take on them all and liberate this new land...

At the Earth's Core is a fun picture, with cheesy perhaps being a fitting word to describe it, but the movie's so earnest that it feels weird calling it cheesy, when it's trying to be [like this]. It moves along at a steady pace, never boring.

This is very faithful to the book its based on. Many things are streamlined, and certain things are omitted (namely the cliffhanger ending), but otherwise you'd be hard-pressed to call this a bad retelling by any means. 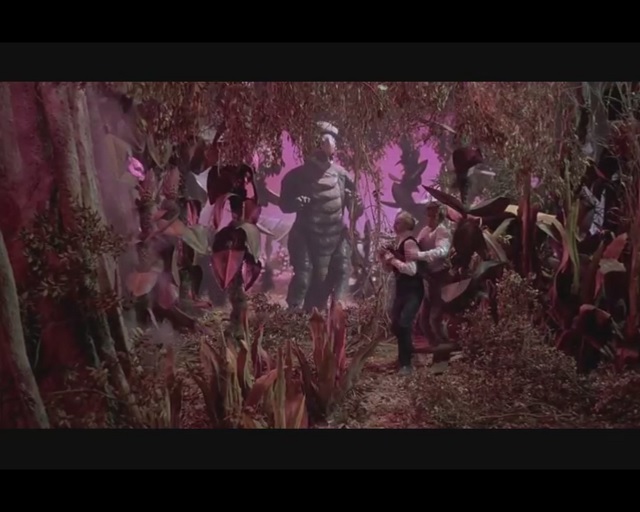 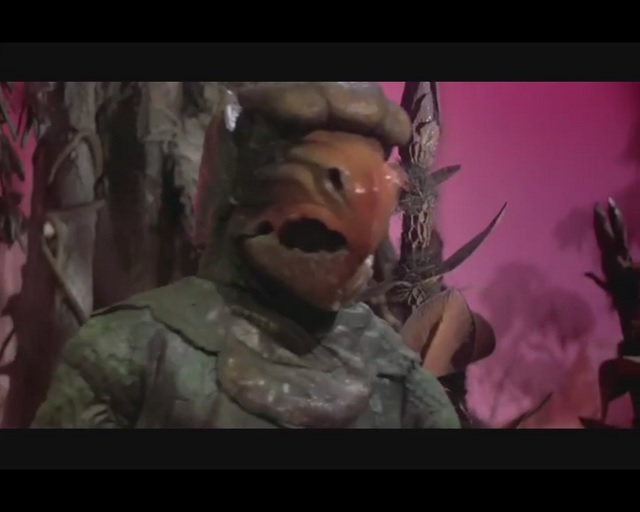 The only drawback to At the Earth's Core as a film and an adaption is that things come a bit too quickly, too easily. What might take several chapters in the novel and over a longer period of time, happens in five minutes or less.

Onto the characters. David is a fine hero. He's resourceful, noble, and clever. The typical archetype, and despite him being pretty flat in terms of characterisation, you like the guy based on his actions, and he makes for a worthy protagonist. Dr. Perry is great comic relief, and helpful too! Not only does he rattle off hilarious lines like "You can't mesmerise me, I'm British!", but he'll give useful information, and even gets a few good action moments!

The beautiful tribal princess Dia is nice enough, and has an alright romance with David, but she disappears from the story about 25 minutes in, and doesn't show up again until well past the hour mark! Her older friend/protector Ghak the Hary One gets a decent amount to do early on, but not so much later. 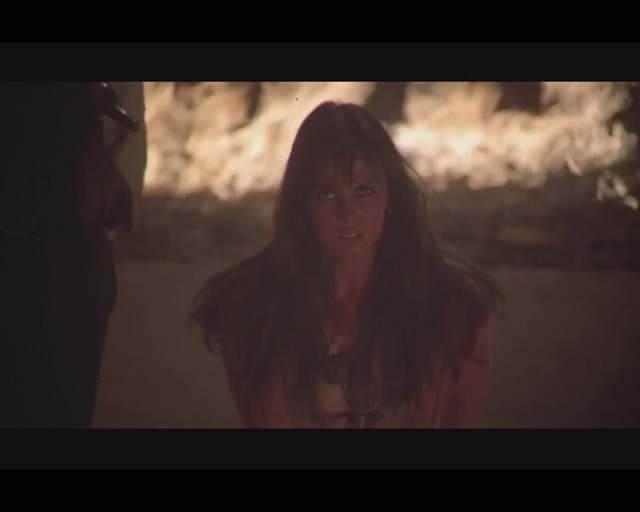 The warrior Ra is a neat sidekick, starting out as a bloodthirsty adversary, then a trusted ally, who really gives it his all. Meanwhile, the untrustworthy villain Hooja the Sly One barely appears, and even in what seems to be his big moment of betrayal, he never gets the chance to, and just dies at the end. It's satisfying watching him be eaten, but I can't help but think how much more satisfying it would have been had we really seen him do more to screw over the heroes.

The villains aren't the most deep, comprising of the Sagoths, who talk like a VCR backfiring, and the Mahars, who are mute. They look neat, and certainly threatening, and the film does a good job at showing off their evil, namely in the feeding scene, but aside from that we never really get anything that makes them great villains here. 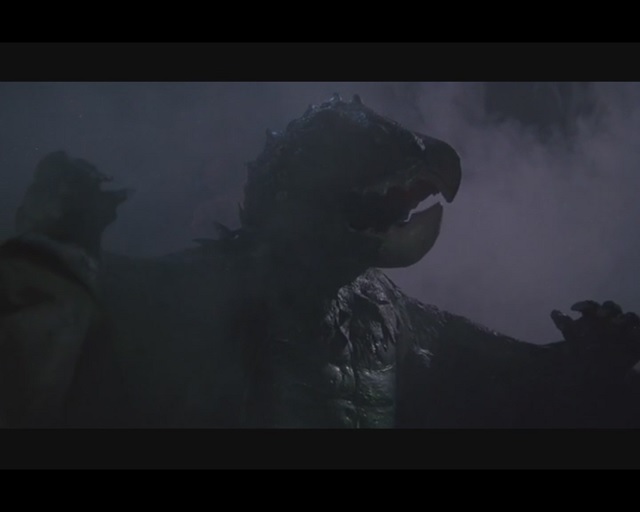 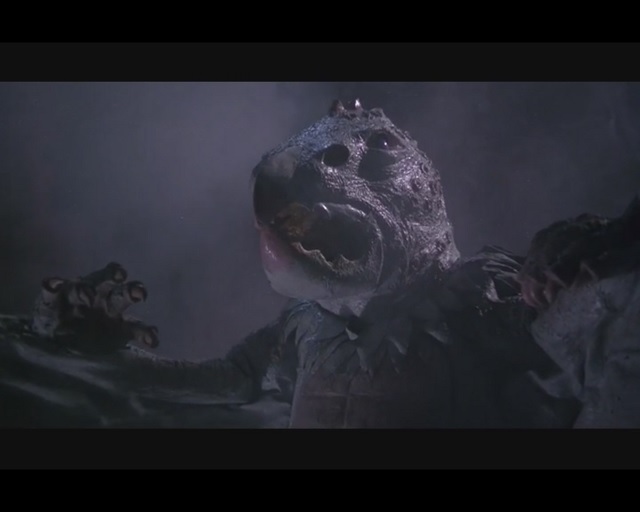 A slight problem the movie has is that it's got too many characters. I do applaud it for sticking so book loyal that it kept everyone in, from Ghak, to Ja, Hooja, and Jubal, but the film does suffer a little by cramming them all into a 90 minute picture, when they've got comparatively little to do. Even Dian herself disappears for half the film! Some of these carry over from the book, but at least some of it is the movie's fault.

One not so loyal part of the film is the names themselves. Dian is now Dia, Ja is Ra, etc! Why such changes? They're so slight that it just seems baffling? 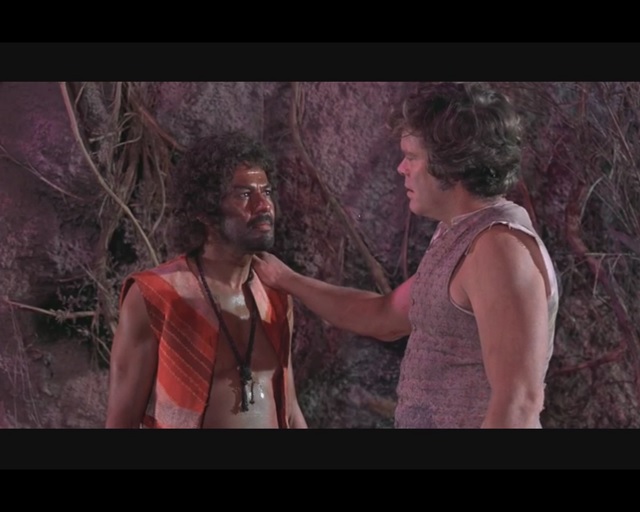 The action in At the Earth's Core is pretty fun! While a lot of it comprises of scrapping between dozens of people all at once, it looks good, and the one-on-one fights are well choreographed. The weapon battles are good too, such as the encounter between David and Jubal, and when he's gotta defeat a giant monster with just a spear. My favourite moment was near the end, when a Sagoth hurls a spear at one of the heroes, and impales one of his own. 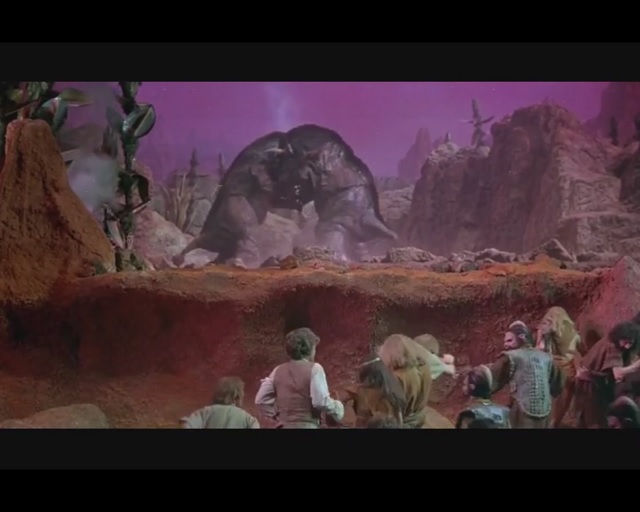 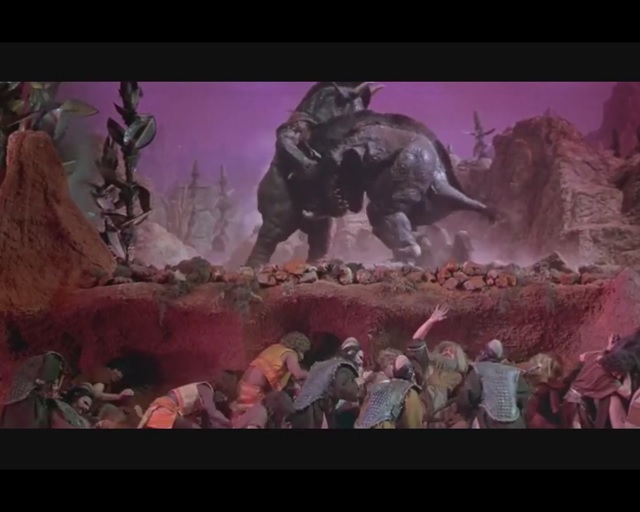 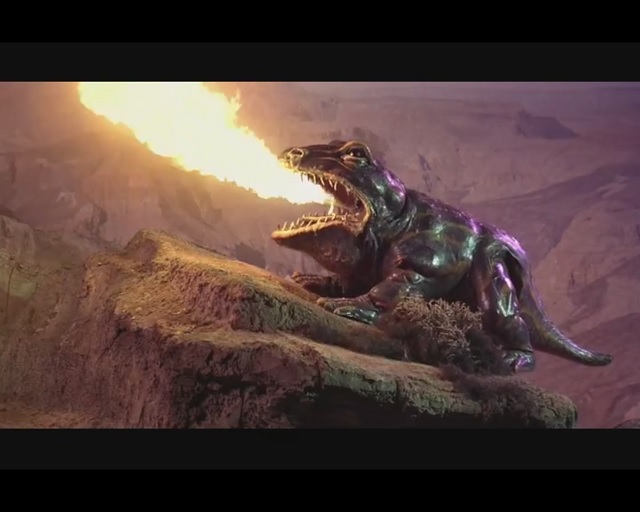 The effects in At the Earth's Core are perhaps the main attraction, and they're great! The monsters are all men in rubber suits, and while they sometimes look quite goofy, and the green screen = to make them look bigger falter in some scenes, but for the most part they look convincing, and mesh well wit their surroundings. Less impressive, and more laughable is the obvious doll when someone gets eaten!

The costumes here are decently crafted, and the make-up is all neat too, with the most notable examples being the pig-faced and dome-headed Sagoths. I especially thought the movie did a good job capturing the visage of Jubal the Ugly One. While it can't be as gruesome a design as the one in the books, it's also not a cop-out. He still looks like a mauled berserker. 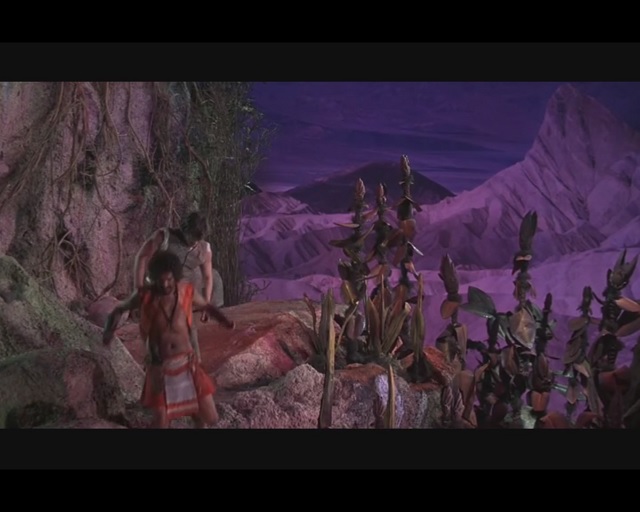 Lastly, there's the location itself. We don't get a great deal of wide, expansive location shots in the movie, with a lot of scenes being either in = close-quarters, or in caves, but we get a few, and they look good. The matte paintings are great, the pink lighting lends a suitably alien atmosphere to Pellucidar, and even the more set-bound moments are never fake or anything. The money was well-spent for this production.

The acting in At the Earth's Core is fun. Dough McClure may look a bit weird for such a role (), but he does a good job, and him being an American = in a British film works, partly due to that being from the book, but mainly due to his = performance. Up next is the great Peter Cushing, who delivers a performance that from anyone else would be highly undignified. He acts like a human C3PO! It's uncanny. 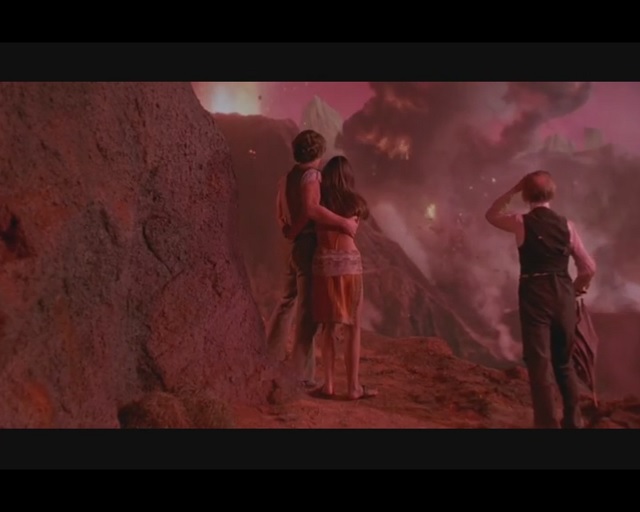 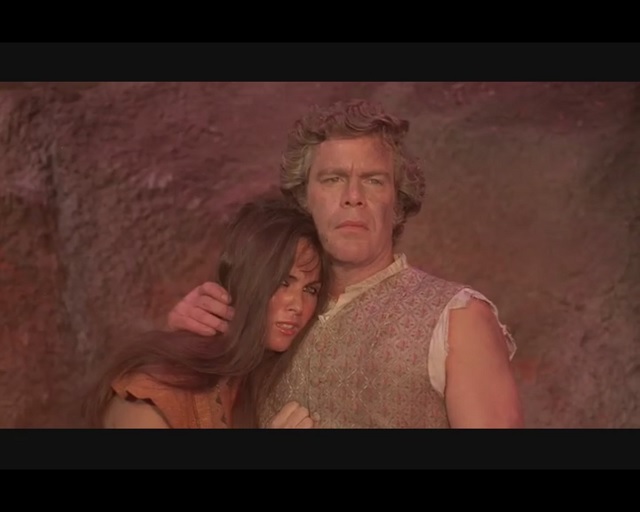 At the Earth's Core is a perfect example of subterranean fiction, and great fun to watch, especially for a fun movie night with friends!
Posted by Chris at 11:59 PM