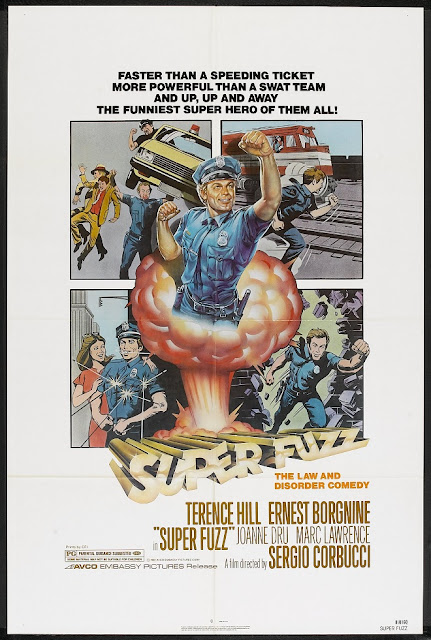 Officer Dave Speed is your everyday policeman, until one day he's caught in a special atomic blast, granting him superpowers. Now finding he can do almost anything, he puts these powers to use by rounding up criminals, but in doing so he earns the ire of local gangster Mr. Torpedo, who races to discover Dave's weakness before he can...

Out of the many films Italian superstar Terence Hill made, Supersnooper (aka Super Fuzz) is one of the most fondly remembered, and for good reason. It's a real hoot! It has a fun and distinct plot, which it utilises to its full potential,  not only delivering an entertaining story, but a ton of hilarious moments.

Super Snooper starts off/out in media res, with the lead character about to be executed, and  narrating to us about his life story,  what went right and what went wrong. It's an effective way to open the movie, even if I feel it did perhaps drag the movie on a bit longer, and would've been fine if left out. I  its presence

The plot is a bit meandering    While the hero is great fun, the villains are a little boring. It is unintentionally amusing though hearing one of them speaking with a stereotypical Italian accent when they're in the same scene as the actually Italian Terence Hill.

The biggest problem there is for me with Super Snooper is that it's a bit overlong. The plot gets a bit too stuck on early developments, like how long it takes Dave just to find his friend Silvius and to find out what his weakness is. The scene where he fully shows his powers to Dunlop and his girlfriend comes over an hour in, but feels like it should've been way sooner. Of all the movies to border on 2 hours, Super Snooper is not one of them.

The hero is a good one. He's noble,  heroic, and a bit of a dick in some scenes (namely when he's trying to use his powers on his fiancee, which leads to a great payoff), but that is at least intentional.  =, he's played by Terence Hill, so that increases his likeability by a hundred percent! Ernest Borgine is not quite acerbic/caustic, but is all the same quite grumpy and shouty [in this movie/as Sgt. Dunlop], but that's not to say he's never his usual cuddly self.

After all the constant lip service Rosie LaBouche gets from the smitten Dunlop, it's a shame she ends up being a total bitch. And on top of all that, her being evil doesn't really play into the story at all, feeling a bit pointless. We never get a resolution regarding Dunlop's unrequited feelings for her, like her using/exploiting them to  get Dave, or him getting his own back at the end by being the one to arrest her.

Mr. Torpedo is your average stereotypical mafioso kingpin. Ok, and I appreciate them for taking him =, but he doesn't get as much to do as I would've liked. His three henchmen are pretty fun, and take a serious beating as the movie progresses!

Super Snooper is very amusing, with the comedy being by far the best thing about the movie. I liked much of the situation humour (like a cop traversing all the way to an isolated little town, wading through thick swamplands, all to deliver one parking ticket), to the slapstick gags (I shan't spoil any of them for you), and whenever his newfound weakness strikes, like when he casually jumps out a window to prove his powers only to land near a red mailbox. The ending is pretty out-there too! Just when you think they're not gonna go there, they totally do, and it's great!

One joke early on I feel was quite pointed! The area that the government is testing the bomb in is a town that was populated by some Native Americans, who've 'graciously decided' to be patriotic and abandon their town. They look amusingly = .   Also, I bet they're really pissed they weren't allowed to stay, otherwise they could've all gotten superpowers!

There's a mix of really good and amusingly unconvincing effects on display here.   The only really egregiously bad one is the green screen balloon flying during the climax, reminiscent of Puma Man or Classic Dr. Who in all the best ways, but the plane stuntwork afterwards makes up a little for that. The  running looks good, and   The final offender is the opening credits sequence, which is a literal pain on the eyes, and makes the credits almost unreadable. Everything's put through this filter, but it's so extreme that you can barely make anything out.

The acting   Julie Gordon is a little weaker at times as Julie, but is otherwise nice, especially when pissed off. Joanne Dru is delightfully evil as the stuck-up film starlet Rosy. Classic actor Marc Lawrence was mostly known for playing gangsters in supporting roles, and here he gets to deliver a fun send-up of them. Whether he amuses or annoys you with his exaggerated delivery may depend (it even changes on different viewings for me!), but he's good, just underused.

The score to Super Snooper is very groovy! It's a mix of 80s synthesisers and 70s disco, and meshes really well. Just a shame that this is an Italian movie, meaning we get to hear this great theme about half a dozen goshdamn times! Thankfully it's spaced out well enough that it really only wears on you come the final 10 minutes, but still!


Super Snooper is a super fun example of Terence Hill's solo work! Flaws aside, it's still plenty of fun, and great for when you're in the mood for a silly comedy, the sillier the better!...