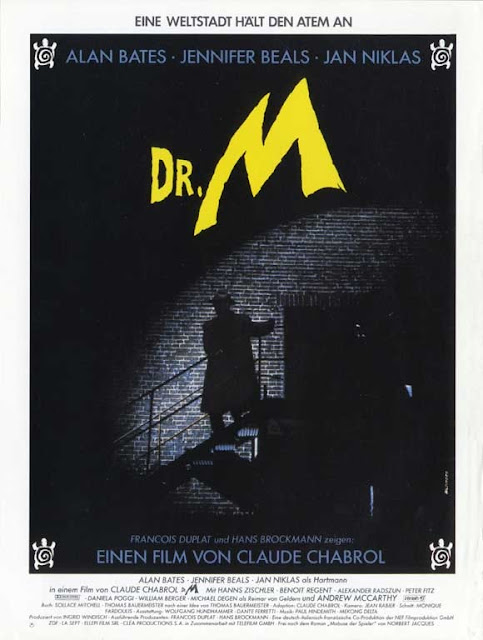 In a still divided Berlin, in the near future, a series of bizarre suicides has rocked the city. Dozens of people have killed themselves, with some taking other innocents with them in the process. Hysteria grips the city, and a popular vacation getaway company is making a killing from the influx of fleeing Berliners. Those who remain placate themselves with mindless TV programs, but it seems like nothing can stop the onslaught of death.  Lieutenant Hartmann is the only one with a suspicion as to what's going on, and notes the coincidence of each suicide victim having the same defaced pictures of the Club Theratos spokeswoman, whose televised face dots just about every wall in the city. He soon uncovers her connection to the enigmatic TV mogul and businessman Dr. Marsfeldt, who may know more about the horror than he's letting on... 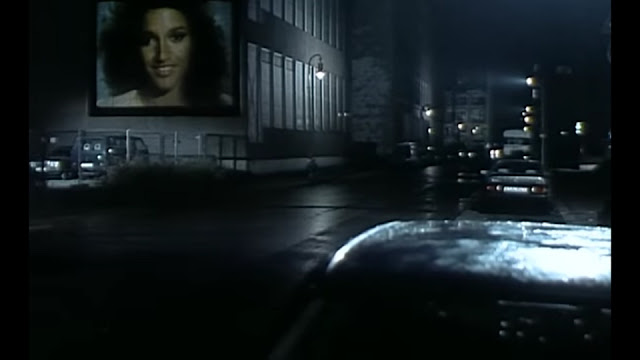 Dr. M is quite an interesting movie, but it's flawed. This feels because it has a little too much going on, and might have too many unexplored avenues. Each of these, such as a plague of suicides, the corrupting holiday retreat, social effect of television, and an invalid supervillain surrounded by decay, etc, are all very interesting in their own right, but the movie can't seem to decide which it wants to focus on, so it doesn't really focus on any one plot. It feels a little unfocused, and like a missed opportunity. To the movie's credit though it's never jumbled.
The movie kicks off in an intriguing way, though it's never clear why the villain is doing this until the very end, and even then not so much. I only knew what he was planning because of prior familiarity with the Dr. Mabuse character.As for its connection with Fritz Lang's movies, this is like a spiritual successor more than an official remake, and it captures the tone and spirit very well.
The holiday retreat comes across as so absurdly suspicious that you have to wonder why no-one's reported it yet, especially considering everyone who goes there seems to kill themselves. Hmmm, I wonder if there's a link?? It's also never really explained how these suicides are caused, but we can put the pieces together, so that's no problem. 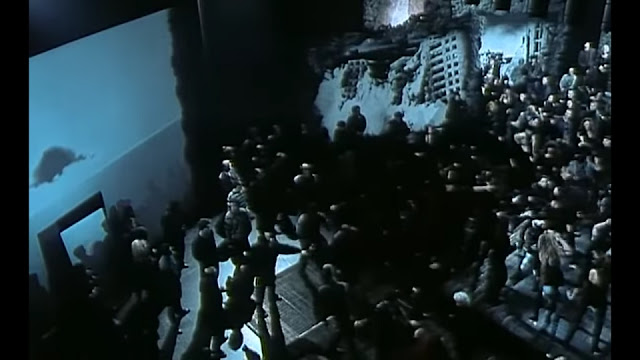 The setting is a great one, playing into the film's themes. Even though the Berlin Wall was torn down juuuust before this film came out, making it laughably dated before it even saw a release, time has been kind to it. To a viewer in 1990 the wall's destruction was at the forefront, but anyone watching nowadays could easily put that out of their mind. To us living 30 years on, 1990 may as well be 1985 for all we know, so it's no big deal.
While the film handles the subject matter well for the most part, it does on occasion feel a little mean-spirited, with some of the deaths and the tolls. There was one particular moment in a restaurant that I won't spoil, but if you see the film you'll know what I mean. It's certainly unexpected! It felt a little cheap too though, like shock value, and a bit beneath what the film was going for. It also totally killed the momentum of a previously interesting scene! Plus, it came a bit too close to the final act to feel necessary. At this point we friggin' get there are suicides. When there's only half an hour left we really should be getting to the more important things.
The climax is very thrilling, and really gets across having a lot at stake. It's a little disappointing that there's not really a denouement where we see Berlin's reaction to this affair now that it's come to an end, but besides that the film ends in the right place, on the right note. 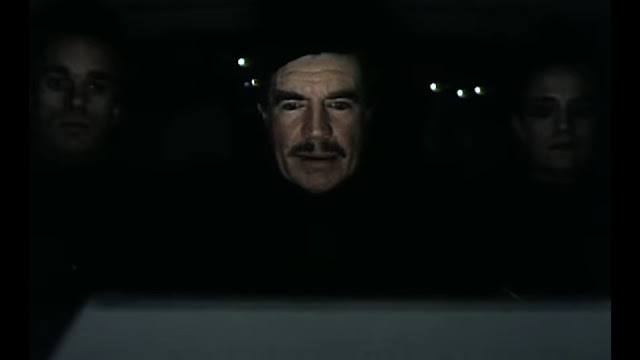 Dr. M is a pretty straightforward movie and relatively light on the upfront abstract, leaving its artistic qualities to be in the background, as themes and implications. Because of this, it's quite accessible as far as arthouse pictures go, although perhaps not quite as challenging as it could've been.
One of the most artsy moments is a classical music scored sex scene interspersed with some annoyingly real destruction and post-mortem footage, which aside from killing the satisfaction of seeing a nude Jennifer Beals, also feels uncalled for. It always bugs me when arthouse directors feel the need to show real snuff footage to show some kind of point about how "We're all just, like, animals, y'know man? Enslaved by the bourgeois constraints of the communist manifesto that is LIFE!...Anyway, here's a photo of a human corpse to prove how deep I am". 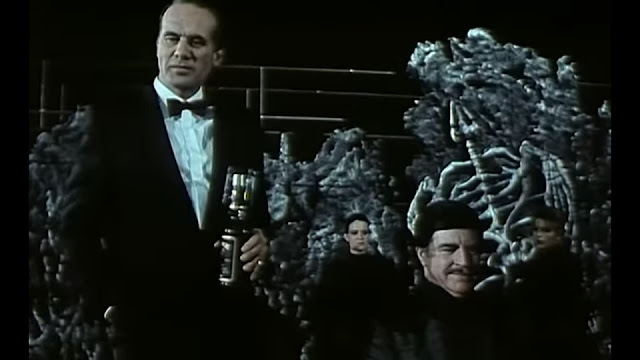 There are many little clues and tidbits that a keen-eyed viewer is bound to notice, especially if they're at least a little bilingual, such as the name of Marsfeldt's company-Mater Media. Why 'Mother'? Could that be important? Might be! The same goes for the name of Club Theratos, which is probably Greek.
I wasn't that impressed by the heart monitor picture that shows Chaos in English, and Stabilität in German. Is this indicative of the fact that Germans are much more levelheaded than the English? Besides that, it seems to flash the words in the wrong order sometimes, saying Stabilität when it apparently means Chaos.
One interesting theme is that of accountability. Hartmann feels responsible for the suicide of his wife, and for another death that occurs midway through the film, and Sonja is guiltridden for her part in the rash of deaths. She's not responsible herself, but it's still her face and words driving these people to their dooms. 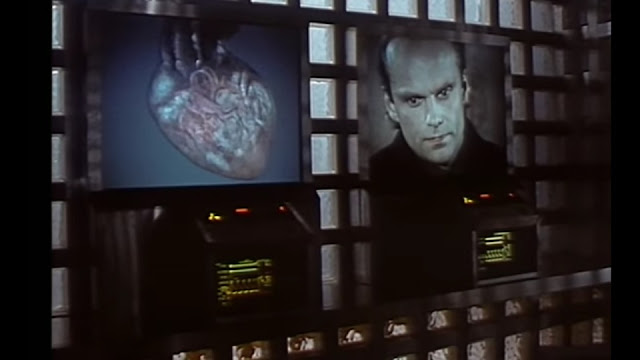 One missed opportunity is that the name of Marsfeldt's club (Club Extinction) rarely comes up. It's a shame, because that's  quite nicely with the seemingly positive and welcoming Club Theratos compared to the foreboding and nihilistic Club Extinction. Another missed opportunity is Marsfeldt's fate. I thought it was brilliant at first (i.e. "This is so thematic. He orchestrates so many X's, yet he can't X himself, and that's his ultimate prison!")...until the film proceeded to contradict itself.
Hartmann is a good protagonist. Abrasive and cocky, yeah, but you do get why, and he doesn't come across as obnoxiously so for the most part, especially considering how bad of a situation he's having to deal with, and how closely it hits to home. One scene that really pissed me off though. After saving Sonja's life again, he accompanies her to her apartment, but is shut out after asking a pointed question. Moments after slamming the door, Sonja opens it again, willing to talk, but Hartmann's scarpered! Asshole, she was gonna open up to you! 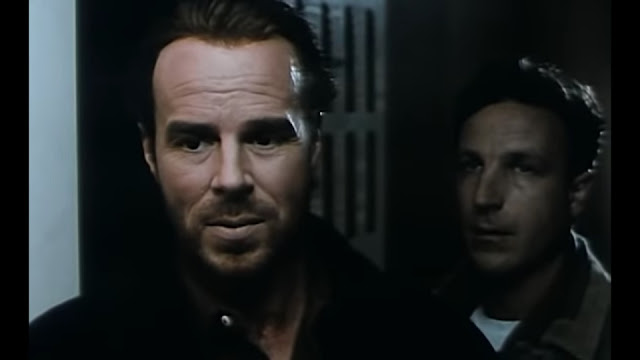 Sonja is a good supporting lead. She has a great character conflict, with her uncontrolled image seeming to be the catalyst for so much horror. She's unwilling to believe ill of Marsfelft, but in a believable way. Once she's given evidence of his wrongdoing, she's immediately up against him, helping stop the diabolical madman's plans.
Hartmann's deputy Stiglitz is a likeable dude, clearly at his wits end after all he's been though. His fate is telegraphed basically from his first scene. Despite all this unsubtle build-up, his death is incredibly abrupt. He's alive one scene, dead the next.  He's rarely mentioned afterwards, though we get a few good moments. I wonder if it perhaps would've been a stronger and more original if instead of dying, we saw him struggle with this experience, but power through it, and come out on the other end stronger.
Government man(?) Moser is a bit of a confusing character. He shows up at random intervals, seeming to hold an important role, and always surviving whatever's thrown at him, yet for the life of me I had no idea who he was. Just that he might be named Moser, and I think he's good? His end is strangely out-of-place (I knew the film wasn't meant to take place when it was made, but WHAT?), and rather dumb on his part, but I feel he served his role well in the end. It just could've done with a bit more fleshing out, or more even pacing so we don't forget which balding middle-aged white guy we're looking at. 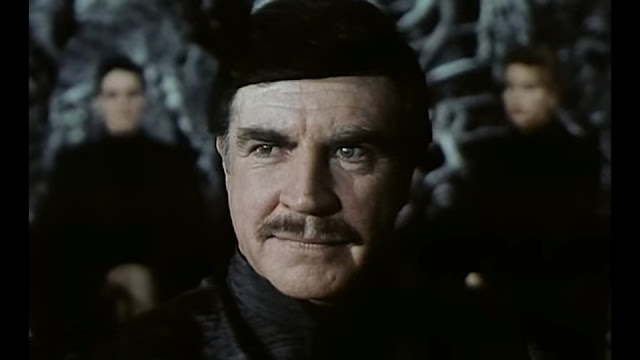 Alan Bates plays an interesting iteration of Mabuse, in that he actually shows an emotion other than pure blinding hate. I actually wasn't sure who he was at first, partly because I hadn't seen Bates in a movie before and thus didn't recognise him, and also because he had the cheery demeanour of Dr. Bombay of Bewitched! When you spend enough time with him though, there's a sinister undercurrent you notice to his performance. Unfortunately he spends too much time in the lighthearted facet of his persona to really feel like Mabuse, until the very end of the movie when he gives a final speech to the camera, with a very Rudolf Klein-Rogge stare. Bates also has a tendency to overact in some parts, especially in his weird disguise as a flaky looking guru.
Andrew McCarthy is various levels of billed depending on what cast listing you read. He might be 7th billed, he might get top billing as if he were the lead, with his name on the box. As for his actual level of presence, he's in the movie for about 1 minute, in two very short scenes. I'm quite disappointed. He could've been fun in a larger role. And where else could we see Andrew McCarthy playing a crazed hitman in a European arthouse flick!
Of note is one random minor actor who perfectly nails the silly look of an assassin who's just been killed barehanded by his own target.
The score here is somewhat minimalistic, with the loudest and most aggressive pieces being those in the punk-ish club. 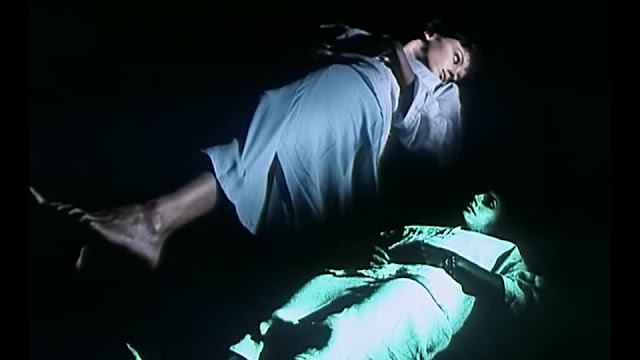 The direction by famed French new-wave filmmaker Claude Chabrol is really good, with many inspired moments, and intercutting used to good effect. The look of the film is wonderful too, perfectly getting across the oppressive feeling of East and West Berlin, as well as that of a hypothetical near-future state where media is most prevalent. With all the Blade Runner-eque TV screens everywhere, I'm surprised Chabrol was able to accomplish all this! And I can only imagine this was all filmed in West Berlin, not least because East Berlin still existed at that time, but was spiraling headfirst into the social change that would see the wall destroyed and the country unified.
Dr. M isn't a perfect movie, sure, but I do recommend it if you're into films of this variety, especially the character of Dr. Mabuse. Flaws aside, Claude Chabrol gets the character in a way other filmmakers don't, and it makes for an interesting experience...
Posted by Chris Hewson at 8:50 AM