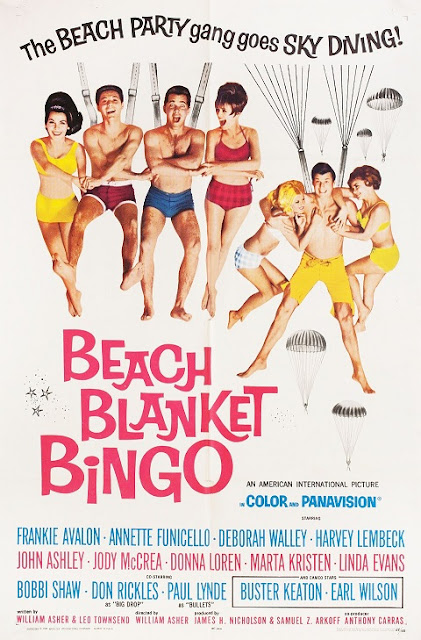 The 60s might not have been all golf and badminton, as they say, but for all the strife going on at the time, the period was also never short of fun. This is best evidenced with AIP's Beach Party series, which released its 5th entry after only 2 short years! These movies would eventually run their course a few films later, but at this point they were still strong outings, holding plenty of popularity. 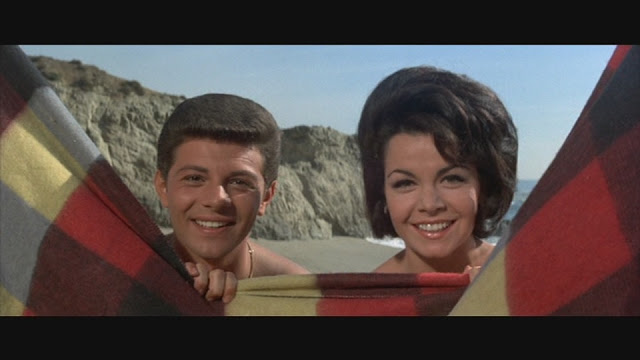 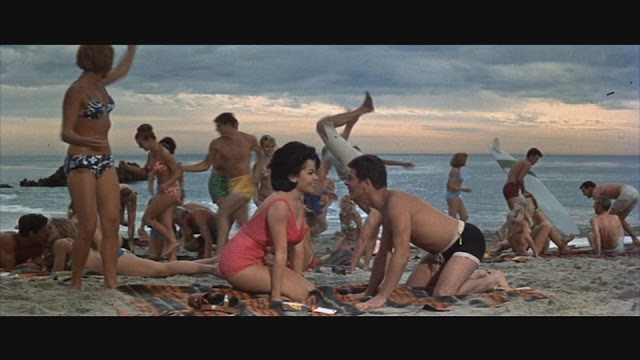 A new fad is all the rage on the beach, as pop starlet Sugar Kane's latest publicity stunt ignites an interest in skydiving. Both Frankie and DeeDee express interest, to the other's chagrin, while jealousy abounds in various ways. Meanwhile, motor-sickle rider Eric von Zipper has his eye set on the lovely Sugar...
Beach Blanket Bingo is a ball of fun! Silly, and not to be taken seriously, it's a movie that entertains on just about all levels. It's full of good innocent cheer, plenty of sexiness, great humour
The first main story concerns the skydiving scene, and there's plenty to enjoy. The two skydivers/pilots have an amusingly dysfunctional relationship, with the girl being a man-eating tiger. It's surprising that for once Frankie isn't the lothario in the situation! She gets some hilarious scenes, like when she tears off her clothes mid-flight to make her boyfriend jealous. Thankfully this all ends in a satisfying way, with minimal awkwardness. 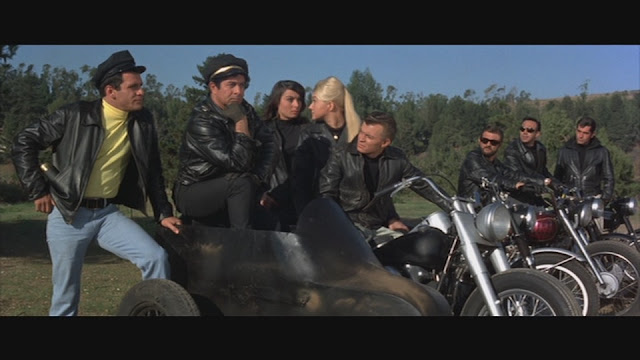 The second big story is all about Sugar Kane, with a sneaky publicity man trying to create plenty of drama, and the Rat Pack biker gang setting their own eyes on the singer. The two stories intersect a little, but are mostly pretty separate, each even getting their own climaxes. Though there is a halfhearted attempt to tie the skydiving into the big chase scene at the end, in a way that didn't entirely make sense. But at least it's enjoyable.
An important subplot features comic relief Bonehead (sometimes known as Deadhead) in a bigger/an expanded role here, and it's surprisingly sweet. The presence of a mermaid is strange, but not too out of place in the setting, and isn't laid on too thickly. While dopey, Bonehead is a likeable character. He may be dumb, but he ain't stupid! 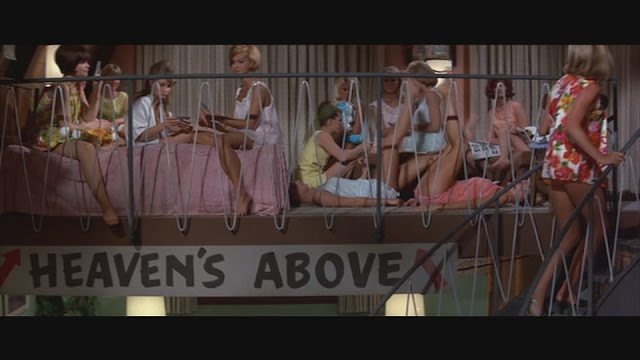 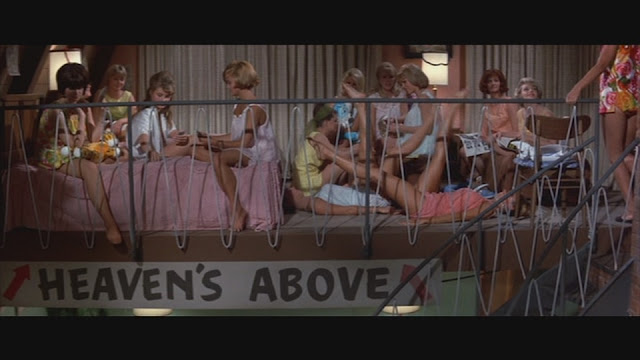 My only issue with the stories in the film is that there are a lot! They're all great, but the movie does have a little trouble juggling everything. It does good enough at everything, and nothing is really shortchanged, but you can still tell things would've been more free and comfortable if the parachuting and Sugar Kane stories had've been separate movies.
Eric von Zipper is the highlight of the movie. He's so goofy and loveable. His cohorts, the Rats and Mice are adorable too. Their catchphrases and recurring gags are in full force here. I love their automated movements, like how Alberta/Puss mechanically applies Pool chalk to Eric's cue, not realising she's splattering it all over his hands. Eric's goal is to find his idol, who he thinks he's found in Sugar Kane. It's a bummer that things don't go his way, because Sugar actually digs him, and likes his whole kidnapping scheme. She thinks it's marvy! 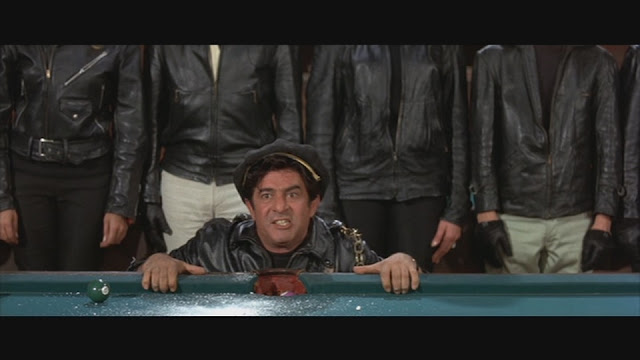 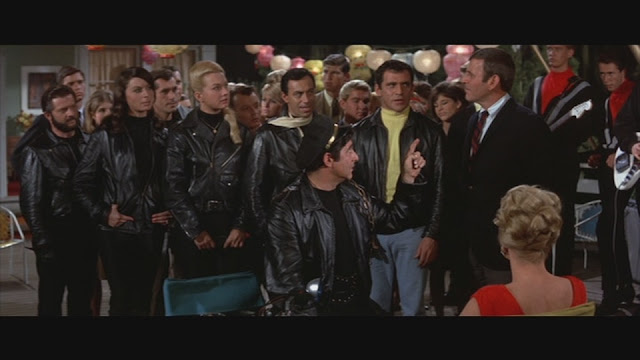 The main villain here (in the last 15 minutes, at least) is South Dakota Slim, who goes from being a patron at von Zipper's club to being the only kidnapper Sugar isn't happy about, intending to slice her to pieces on an old-timey sawmill! I don't care what North Dakota Pete says, the worst he ever did was try and feed someone to a tiger, so where does he get off saying Slim is the Baby of the family? The jealous Mice briefly help him to get rid of Sugar, but true to form, they may want revenge, but they don't approve of Slim's scheme to saw her in half. Thy don't think it's nice.
The actors here are plentiful, really packing the film to the gills. Frankie Avalon and Annette Funicello deliver fun duelling performances. Series regulars Jody McRae, John Ashley, and Deborah Walley all do fun jobs, with the former getting a more meaty and sensitive performance, while the latter two play totally different characters as the two pilots. 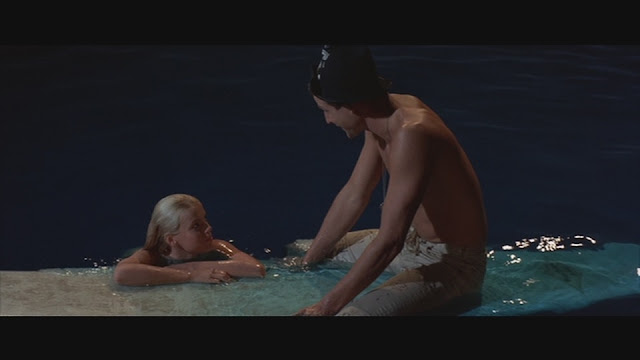 Harvey Lembeck is great as usual as Eric von Zipper, with his Rat Pack being a great accompaniment. Linda Evans is fine as Sugar Kane, while Marta Kristen is good as mermaid Lorelei. Comic actor Paul Lynde gets a great role here, equal parts smarmy and sarcastic.
Don Rickles is fun as usual, as he appears for yet another role. In a standout scene, he breaks character in a way and does a comedy routine, lovingly roasting the characters/cast members, including a hilarious jab at Frankie and Dee Dee's ages. It's great to watch, and the reactions from all the other actors are probably genuine here.
The Beach Party's respect for classic Hollywood continues, with Buster Keaton getting a nice role, and silent cinema influencing a lot of the humour. This is most evident in the last act, which is one big silent film themed adventure, with a big chase, sped-up slapstick antics, and a Perils of Pauline style damsel and deathtrap. 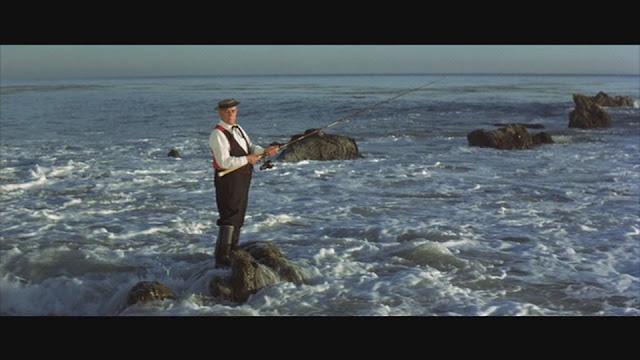 There's an abundance of fun songs to enjoy in Beach Blanket Bingo. They're simple disposable 60s fluff, which is to say they're short, sweet, and may not be masterpieces or anything, but are still very enjoyable. There are no bad performances or tunes, and the best for me were the opening track, the 60s ballad It Only Hurts When I Cry, the fun (and delightfully building) duet I Think, You Think, and Eric von Zipper and his Rat Pack singing all about them rotten soifers. 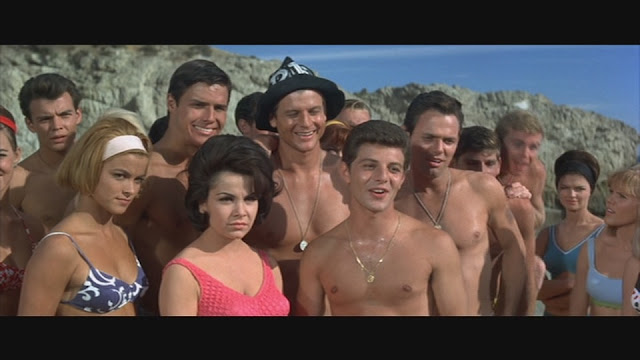 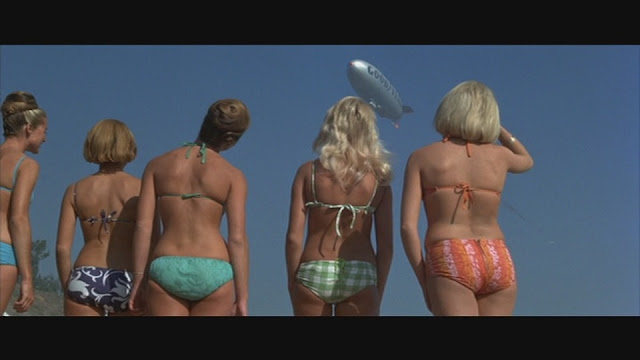 Beach Blanket Bingo is one of the best in the series, and is a great example of lighthearted 60s cinema, the surfer subculture, as well as what teens in general were getting up to at the time. I think back to my own teenage years and I wish I could've done the things they did! But then again, I'm still younger than all the actors playing the teens here, so I guess it's not too late!...