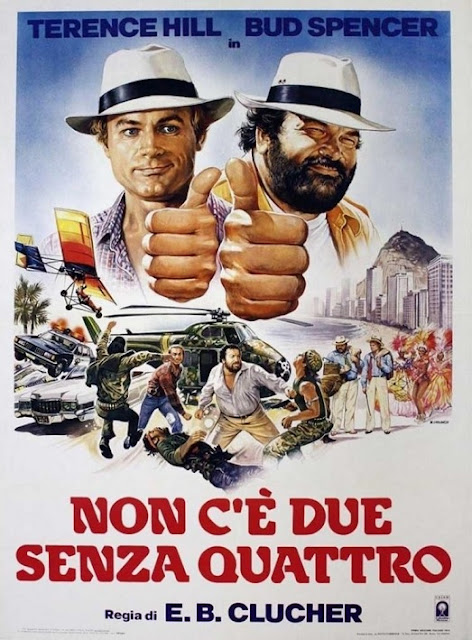 By 1984, Italian duo Terence Hill and Bud Spencer were nearing the end of their creative partnership, after over a decade of great films. Thankfully this proved no reason for the quality to slip, as Double Trouble is considered by many to be one of their best!... 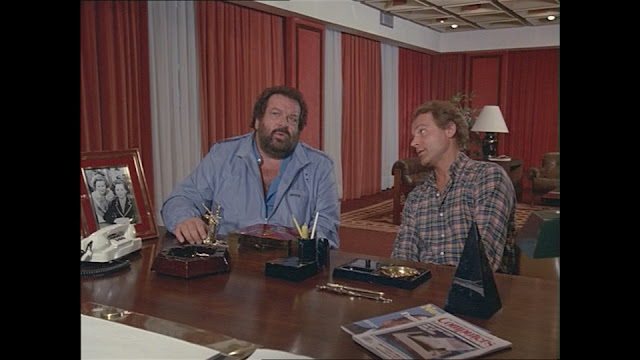 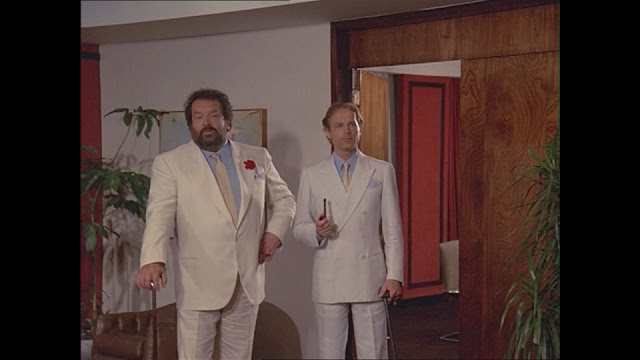 Two random men, musician Greg Wonder and stunt pilot Elliot Vance, are recruited by a company specialising in doubles. It's arranged that the pair will impersonate two extremely wealthy Brazilian socialites, whose lives are in danger, for which they'll be paid $1 million each. They have fun living it up, but much to the horror of their 'twins', Greg and Elliot have no intention of keeping a low profile, and make a spectacle of themselves all over town in order to ferret out their attackers...
Double Trouble is a hilarious showcase of the classic duo's talents. It seems almost inevitable that comedy actors eventually do a double-centred film, and even action stars like Jean-Claude van Damme couldn't get enough of the concept. Here it's a perfect driving force for the movie. It's great seeing Hill and Spencer as two toffee-nosed elites who've never thrown a punch in their lives, and the movie never shortchanges us with this, taking every opportunity to get a joke out of the concept. Never too little or too much. 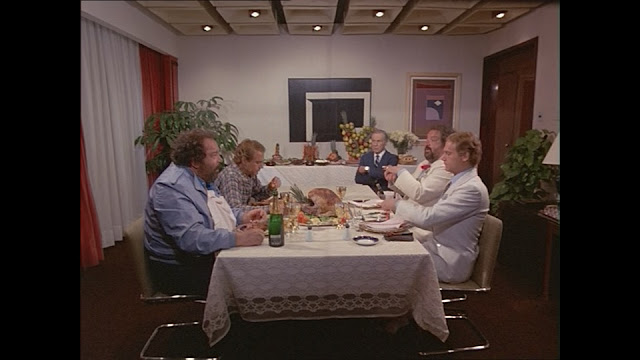 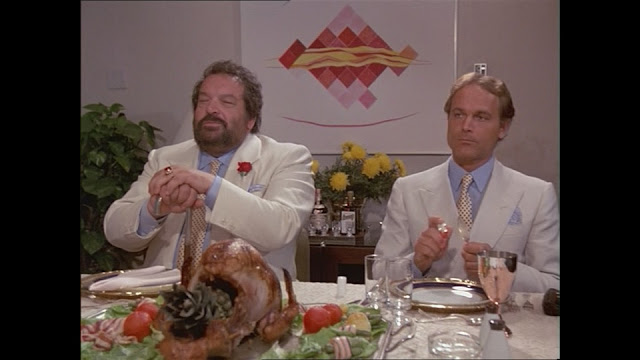 The action is reliably enjoyable, as always. There are plenty of punches thrown, chairs broken, objects thrown into, and much more. The fights are evenly spaced, with the highlights being the bar fight early on, and the climax, where the two 'twins' get caught up in the action together, with the goons chasing and punching out a scared and defenceless snob one minute, then getting their asses kicked by seemingly the same man the very next second. It's a creative final fight with many great moments. 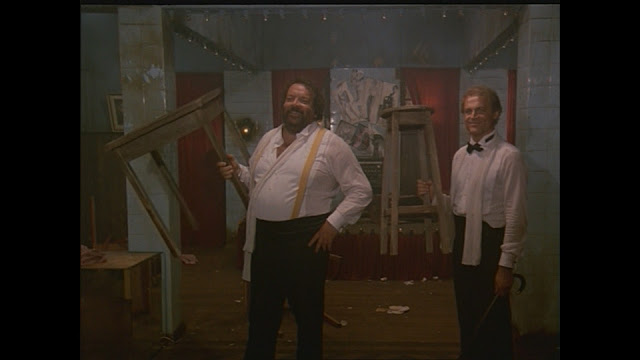 The cast here is  Greg and Elliot (who are almost never referred to by those names, and may as well have been called Terence and Bud) are likeable and funloving leads. They spar a bit, and often want to have a punch-up with each-other, but generally don't mind the other's company. Meanwhile, cousins Antonio and Bastiano Joao Coimbra de la Coronilla y Azevedo are not only absurdly named, but also polar opposites of the other duo. Prim, effete, and smelling as fancy as they speak, they're hilarious to watch.
The household are great, and manage to be fun, sexy, and visually distinctive (not all at the same time though). I wished they'd appeared more! One thing's for sure, the two cousins had better step up their game if they wanna keep these guys in their employ after all the fun they had with Greg and Elliot! The staff at the Doubles company are pretty fun too, in their small roles. 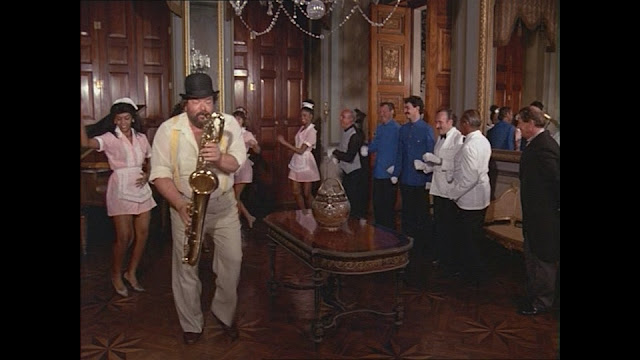 The antagonists are a colourful bunch. You have gangsters, crooked shrinks, ruthless mercenaries, and more. I like how these movies would build up these big fearsome villains...only to immediately dress them down, getting embarrassed and knocked out with ease. It's a great message to send, to never be afraid of these assholes who act and talk tough, but fold like a house of cards. 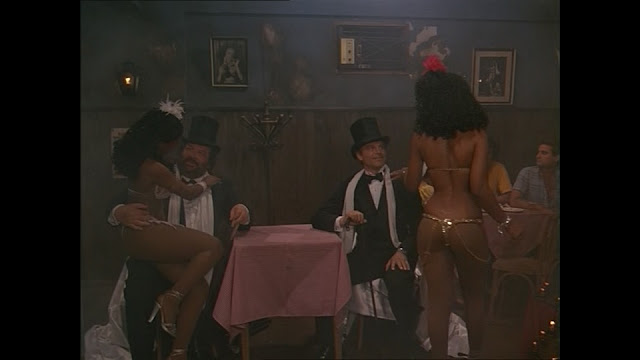 As for the main villain, their identity is revealed in a great twist that I wasn't expecting! And here I thought the obvious culprit would end up being another party. I just wish their motive had been explored a little more, since it's all brought up and resolved in these last 5 minutes. But what we get is fine, so I'm not complaining too much.
Double Trouble is never short on laughs, from visual humour, to great jokes, and the big setpieces. One great example is when the heroes get out of a sticky situation by attracting the attention of the police, who are amusingly American, sending in half a dozen armed squad cars after a single rude gesture.
The ending itself is a hoot, closing with some hilarious dialogue, and fun music to make you move and shake. 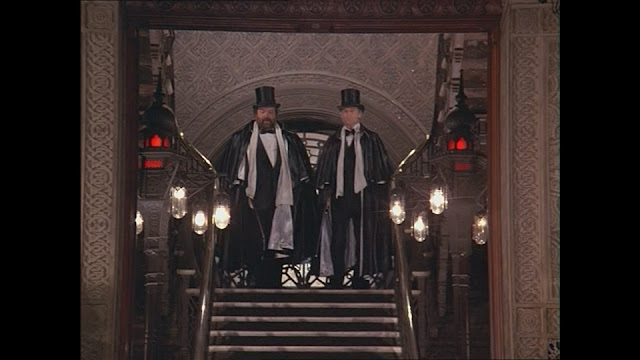 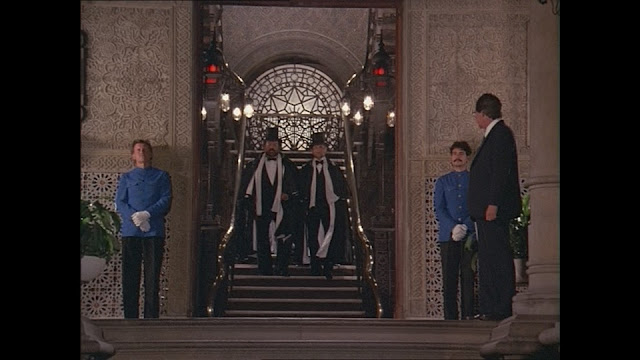 The effects here work really well. It always looks like there are two Terences and Buds, the actors sharing the screen with themselves flawlessly. The film is never lazy with this either, often going out of its way to feature both pairs onscreen at the same time.
Double Trouble helps and is helped by the lovely scenery of Brazil. The country is on display for the whole movie, from the landmarks and natural hotspots, the regular nightlife, to the raucous soccer matches, and of course Carnivale and the sexy senoritas (who can really shake their asses)! It also shows off the broad diversity of the country too. The country here doesn't look the [cleanest], but it looks fun and friendly, which is the best impression a film can give when presenting a foreign nation. 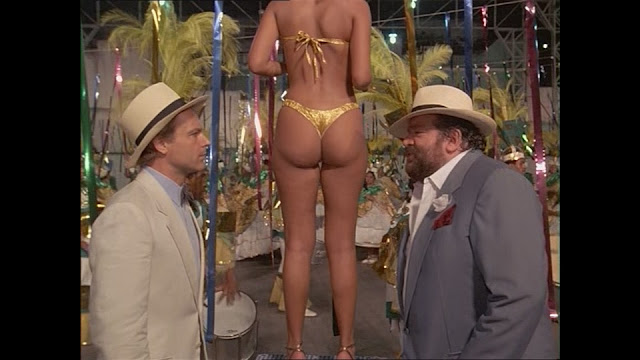 The acting here is all fun. Some performances are cheesier than others, and the dub actors occasionally sound like odd fits, but this is never in a bad way. The real standouts here are the two leads. Not only do they do predictably fun jobs as the main duo, but they are just as good as the two rich cousins, playing radically against type. Best of all, Hill and Spencer are so good with their mannerisms that we're able to tell which couple are which, even in the scenes where they're dressed identically. 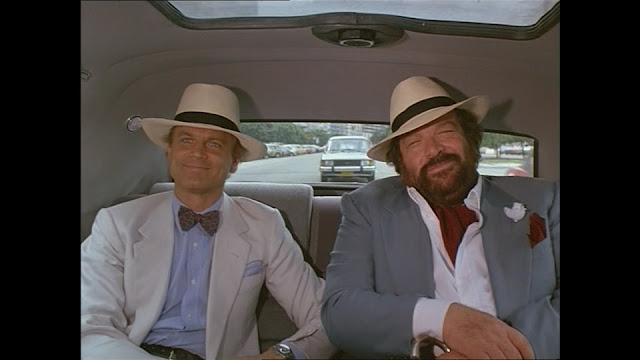 The direction by Enzo Barboni (E.B. Clucher) is top-notch. He would never do a slapdash job just because he was making a silly comedy, but would infuse as much talent as he could, resulting in some gorgeous looking pictures. There are moments in Double Trouble that look   There are also great  on display. For example, there's a scene where we watch Bud and Terence in the middle of a crowd, but due to the blocking, and contrasting visuals (plus a few other fancy terms I don't know the names of), we can plainly see them among these dozens. 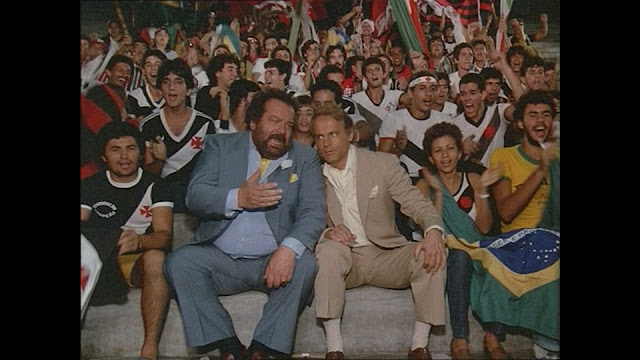 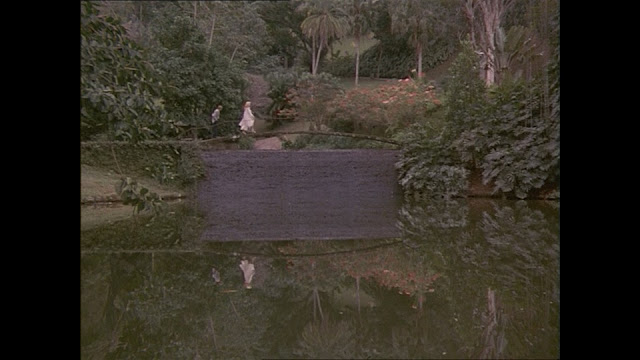 The soundtrack here is really something special! The main theme, What's Going On In Brazil is one I have slight mixed feelings about. On one hand it is a nice song with fun lyrics and a good melody, but I dunno, I think it's just sung a little too softly for me. However, despite me only having seen this movie a couple of times ever, the song has always remained ingrained in my head, so it certainly does something right! This is especially true of all the rescorings throughout. Not only are they great, and very varied, but they also sound every bit as lively and festive as I wanted. The rest of the score is just as good. Even the muzak is funky and relaxing. 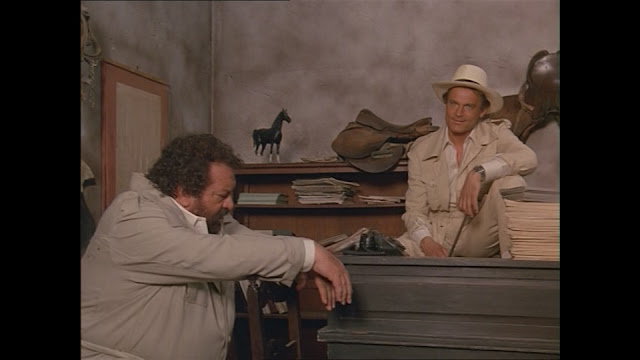 Double Trouble is one of the best films this duo ever made, and well worth a watch for enthusiasts and casual fans alike.
Posted by Chris at 7:29 AM