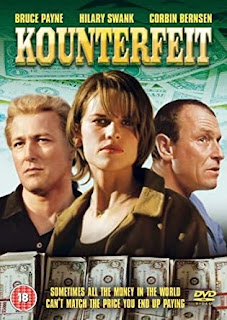 The movie Kounterfetit (bafflingly spelled in German) is one that I've always had an interesting association with. There was this mid-90s action film Gunmen that starred Highlander stars Christopher Lambert and Mario van Peebles. In the same place I found that DVD, I also discovered Kounterfeit, starring fellow series alumni Bruce Payne! Just him though, but still, it counts! Although, as it turns out this does have another Highlander actress, in the form of Elizabeth Gracen! So whaddya know... 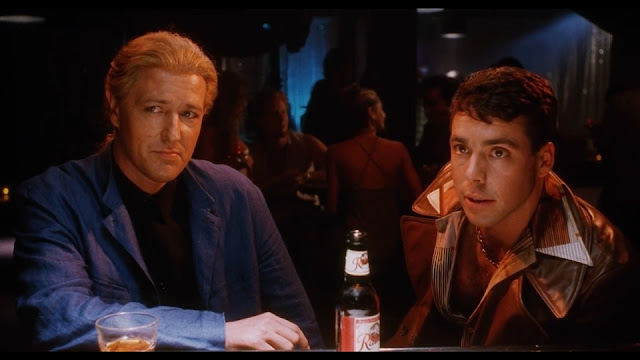 Nightclub owner Frankie is best friends with small time hood Hopscotch (Hop for short), who thinks he's found his next big break. He's acting as a go-between for a counterfeit exchange involving $4 million dollars. Frankie is skeptical about the deal, and this is proven correct when two of the criminals start a shootout. Frankie manages to get them first, but not before they kill an associate, who turns out to be an undercover cop. While Frankie and Hop figure out what to do with their newfound riches, the officer's sister Colleen tries tracking down her brother's murderer. All the while, the homicidal owners of the money plot to get it back...
Things get off to a surprisingly quick start in Kounterfeit. After the prologue, Hop already has the counterfeit, and the deal with the counterfeiters has already been arranged. It's all a bit sudden, but I can't complain. Nothing wrong with brevity. We get good introductions to all the characters, and nothing is overly complicated. 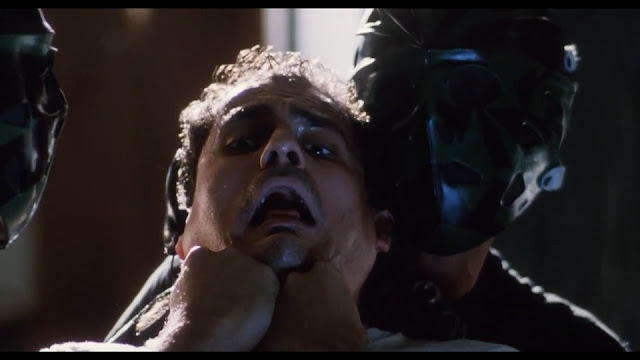 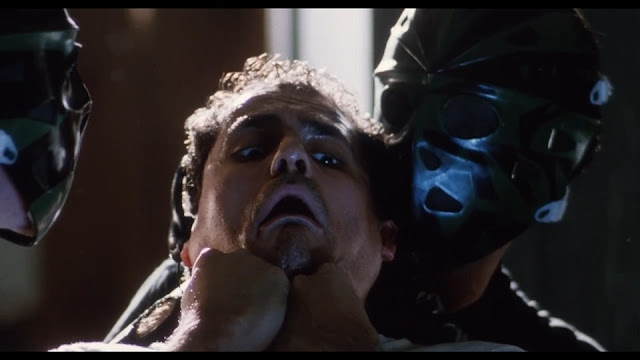 The two storylines intersect well, remaining distant yet connected for the first two thirds, before coming together for the last Everything happens believably too, with minimal frustration. We totally get why Colleen would think Frankie is bad, and luckily this image is quickly dispelled once she talks to him about it. She doesn't spend the rest of the movie refusing to believe him, but instead takes him at his word.
Kounterfeit focuses predominately on a pair of sympathetic criminals, who break the law, but aren't assholes about it. This ambiguity stretches to the police in the film, who are shown to be violent and corrupt assholes. But the criminal life of the heroes isn't presented as all hunky dory either, as the quest for the money results in much tragedy, including death.
I also find it interesting how the interactions between hero and baddie change, and we go from anonymous violence to public intimidation, as the villain's game changes out of necessity. 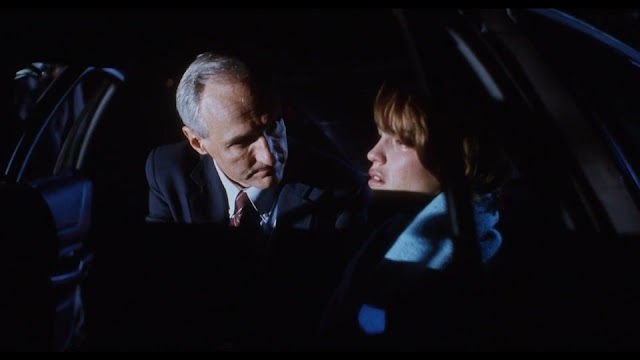 There are a few reveals here, and while it can get ridiculous to a degree (X is revealed to be working for Y, who shoots them, then Y turns out to be working for Z, who shoots them, etc.), they're all effective moments, and make sense within the plot. Event though you'll probably work them out easily enough (the film hardly has a big cast, and none are superfluous, credit where credit's due), I won't spoil the latter two. I will get into the first though, as it's simultaneously the most important, yet most inconsequential. Hop's brother turns out to be the first goon, yet we barely get to know him, and his demeanour after his identity is revealed is really pathetic. He turns from an older and assured guy to suddenly becoming a sycophantic wimp. It's not that I dislike the change, but it just comes a bit out of nowhere, and didn't really gel with what we'd seen before. 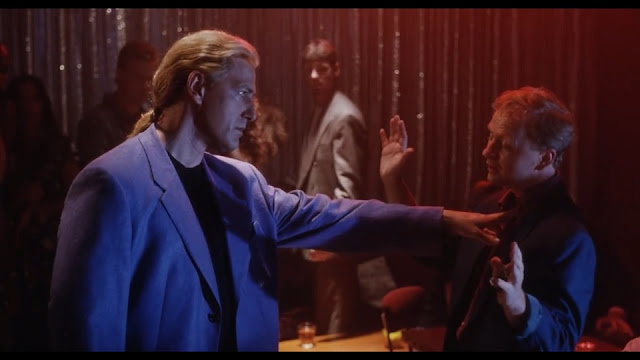 The movie gets extremely heavy-handed at one point, with Hop going on about how all the things he'd like to do with that money, but how none of it is really important when compared with settling down, and how he's reconnected with an old flame who still digs him. It shouldn't be a surprise to you that he is immediately killed. As for that, it's inevitable, and necessary for the plot, but it is a real downer, and I kinda wish they'd found a way around it. However, the scene with Frankie burying Hop is great stuff! It's poignant and emotional, with Bruce Payne giving a memorable monologue.
The action in Kounterfeit is a mixed bag. Some of it is pretty good, but many scenes are absolutely ridiculous! Some examples are Frankie's breakout from captivity, where his hands just magically untie and he immediately finds a submachine gun, ending the scene in 5 seconds flat. Then there's his gunfight with the first goon, who fires half a dozen shots at him point blank, yet misses every one, all while Frankie just calmly marches forward, firing both his guns (never hitting anything either). 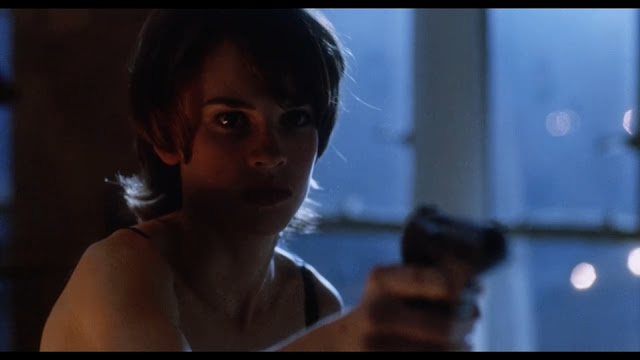 The inciting incident at the beginning has issues too. On rewatch, things do happen as described, but it all happens so fast and Frankie is so quick to get out his guns and blast everything in all directions that at first I thought he was the one who shot the cop! He said to Colleen that he didn't kill her brother and I was like "The hell you didn't, you mowed down everyone!".
The rest of the movie's not short on other cheesy moments either, such as Frankie carrying Colleen up to his room, where an array of candles are already lit. The funniest part however comes when we see Bruce's hair untied, and he looks like a Disney princess! It's both amazing and hilarious. Kudos to the man for having such dazzling hair! 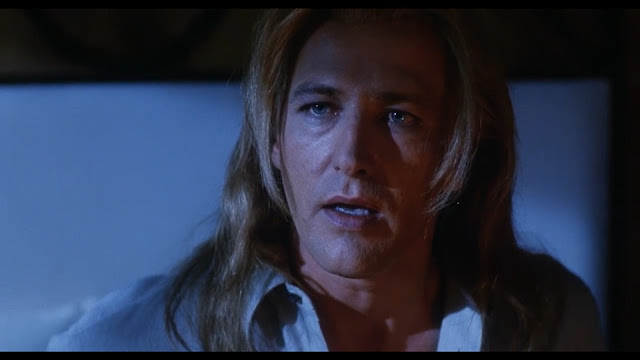 The acting here is a high point. Bruce Payne delivers an interesting performance as the lead, playing it as a mix of big silent 'brute', and thoughtful and noble hero. And best of all, him speaking in an American accent doesn't harm his performance. You wouldn't even know he was British!. Andrew Hawkes is mostly pretty good as Hop, though his goofy nature can get a bit overboard sometimes. Hilary Swank is sometimes almost clunky with certain lines, but otherwise quite good, especially for an early role. She carries the emotion of her side of the story well. 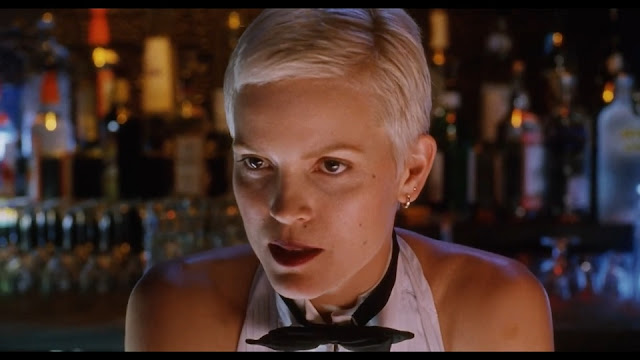 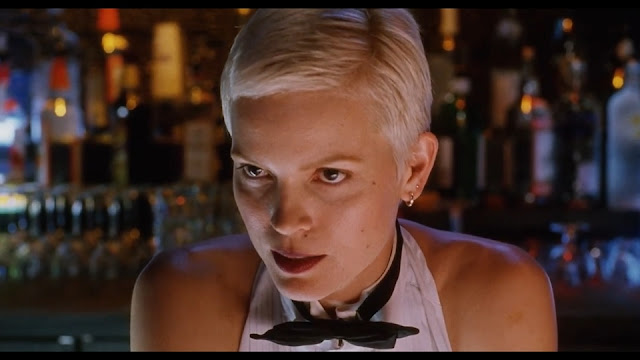 Corbin Bernsen (who gets third billing and a shot on the poster, despite a relatively small role) is alright though doesn't leave much of an impression, Rob Stewart fares better as the antagonistic Vic, and an unexpected Michael Gross is good! I like his part in the ending, where he can be more intimidating than the defacto villain despite his demeanour not changing (precisely because his demeanour doesn't change). And lastly, Elizabeth Gracen is the second Highlander performer in the movie, and opposite from Payne she's a Yank who was putting on a British accent for that series. She does well, though disappears halfway through.
The music here is your typical 90s alternative rock. It's alright stuff. Nothing special, but not irritating either. 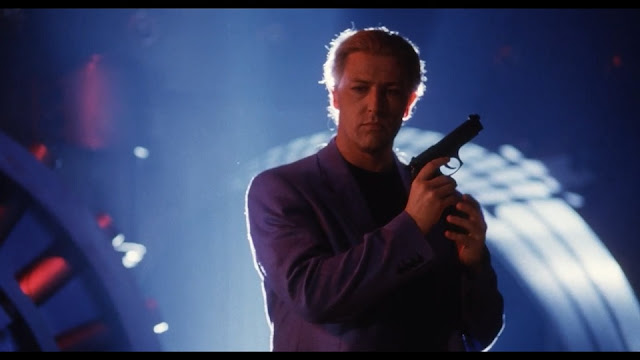 Lastly, something I really appreciate about Kounterfeit is that it's a mid-to-late 90s crime flick that's not trying to ape Tarantino! Who knows, maybe the script came naturally that way, or maybe this was a conscious effort to not copy someone else's coattails  In any case, I'm glad. It means the movie can stand on its own two feet, without feeling like a pale imitation.
Overall, this is a surprisingly good little movie! I sought it out for the actors and hoped it'd be good, and was not disappointed. I especially recommend it for those familiar with Bruce Payne, and seeing the man's versatility...
Posted by Chris Hewson at 4:43 AM