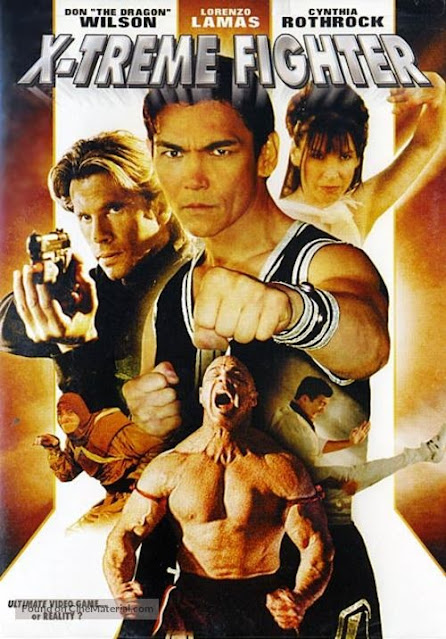 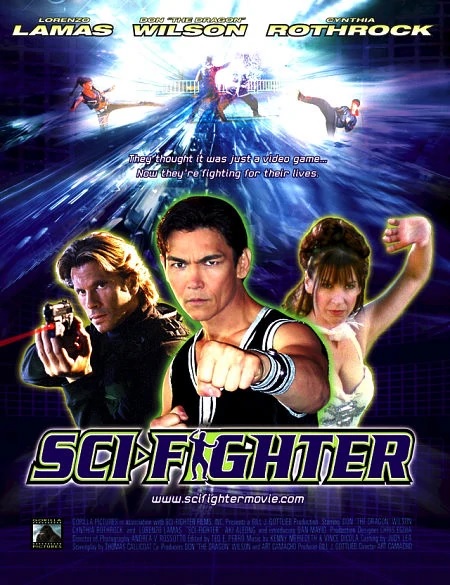 My first exposure to Sci-Fighter was an early internet review back in 2010. It was decidedly negative and snarky, but despite this potentially bad introduction, something about the film stood out to me. I figured it may not be the best movie in the world, but I thought it looked like good simple fun, and was keen to give it a shot. I also immediately took a shine to the lead actor, Don 'The Dragon' Wilson, and the rest is history! Well now I have finally got the chance to watch Sci-Fighter, and can tell you all how it stacks up... 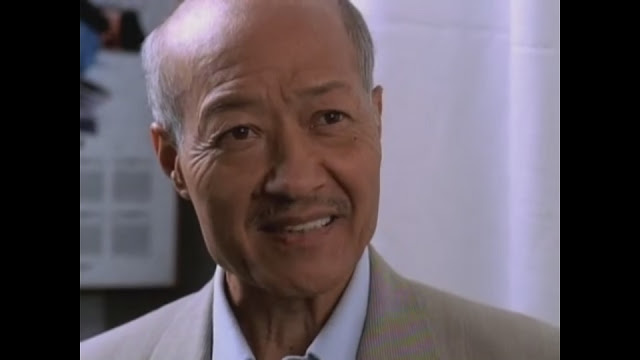 Jack Tanaka is a martial arts instructor with a turbulent relationship with his teenage son Brad. While the two almost come to blows on Brad's birthday, his grandfather arrives with a special present to bring everyone together-His VR video game Sci-Fighter. The game goes well at first, but seems too real, and an apparent accident causes Brad to be trapped inside the game. To save him Jack must go into the game himself, and stop a malevolent computer virus from taking over...
Sci-Fighter is a pretty fun movie! It lived up to all of my hopes for it. Is it the most impressive action movie in the world? No, but it's never trying to be anything more than an entertaining DTV action film, and in that it succeeds great. Especially for 2004! 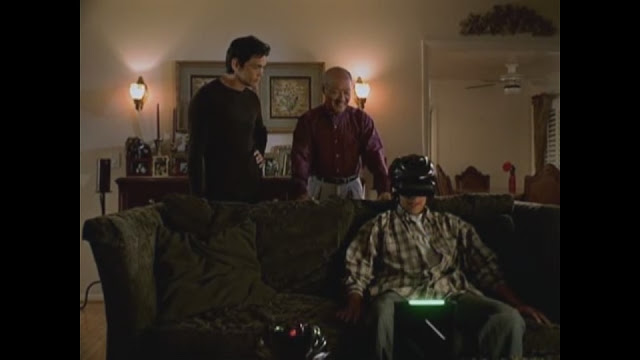 The film is definitely cheesy, and you'll lose count of how many times the name Brad is spoken in the first 10 minutes. But it's written well in general. I liked how the movie had three generations of Asia Americans, each distinct from the other. There's the rebellious teen Brad, the levelheaded and serious dad, and the more easygoing and forgiving granddad.
The plot is thin, since it's made up almost entirely of fight scenes. But it's helped by two things. Firstly the structure is evenly paced, and broken up in such a way to make the constant fighting bearable. We never just jump mindlessly from fight to fight, and there's care put into the opponents. We'll have a small nameless one, then an important one, and so on. Secondly, the characters and their journey is a strong one, strong enough to make the thinnest of plots feel well-rounded. 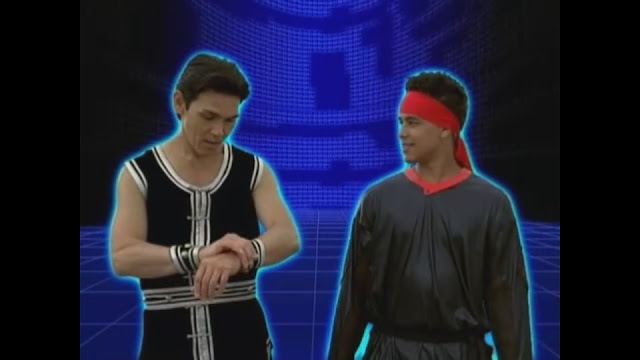 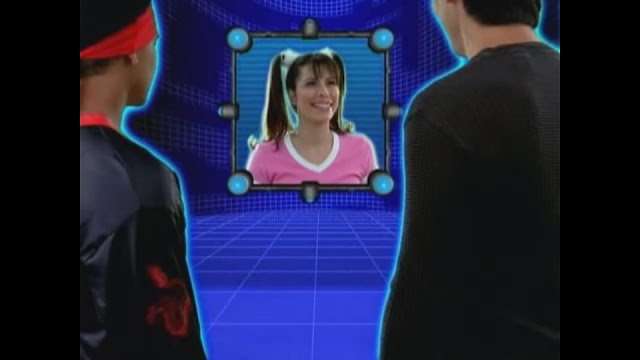 This loose structure does have some detriments however, as a few scenes feel a bit random, and lacking in logic. One in particular is when Jack briefly comes across a virtual version of Lorenzo Lamas's character, and I just thought 'How the heck do you two know each-other? You're a kung fu teacher and he's an FBI agent!'. It didn't seem to add much, and just left me scratching my head. 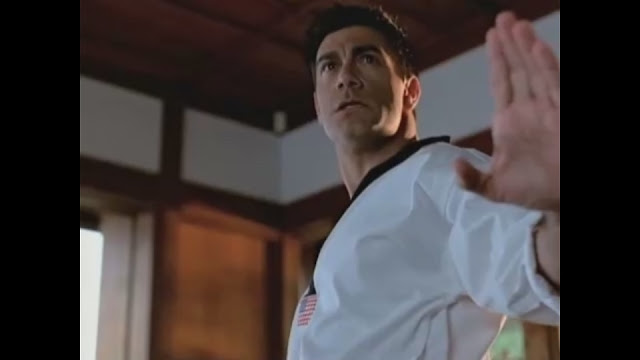 And then there's how the finale builds up this grand arena fight, before suddenly transporting Jack to a random urban garage, different to no other we've seen so far. It's not that I dislike these scenes period. I'm sure they would make sense and serve a fine point, if only they were explained and integrated better.
Jack is a good protagonist. He's a good guy, but with believable flaws. He's never so much of a stick in the mud that you don't like him, but enough they you can see tension between him and his son growing. And this mindset doesn't just come from nowhere either. 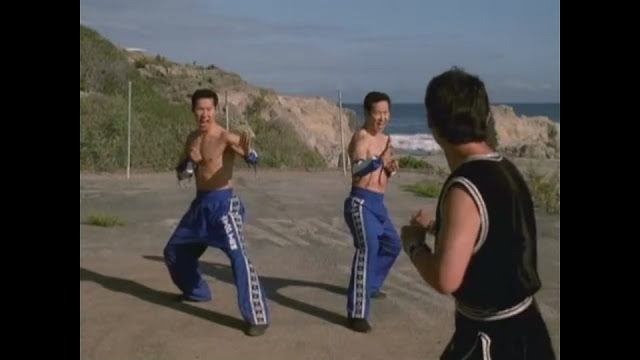 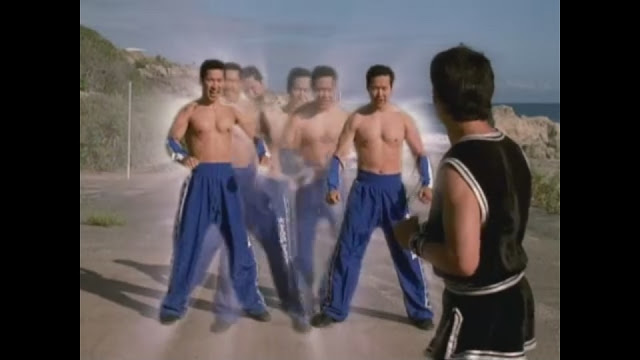 His good nature can best be seen in the game, when he feels compelled to save the White Dragon, despite her not being real. Both she and his dad tell him this, but he does it anyway, which could be seen as stupid, since what's the point of rescuing a lifeless hunk of data, but I feel it highlights what kind of a man he is. And it all fits together with his character's backstory too, making it all the better. 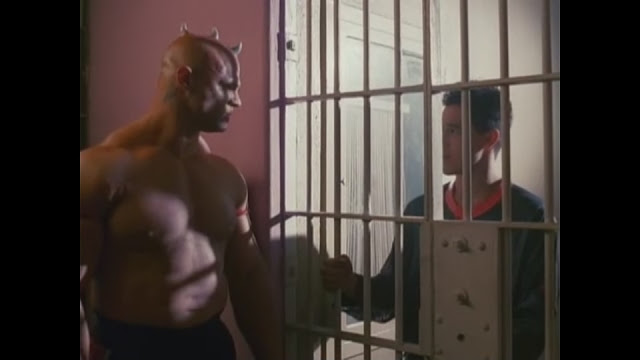 Brad is your typical teenager, wanting to party, breakdance, and ignore his father. His motivation comes in the form of a tragic backstory, where his mother was killed in a mugging, after she went out on a nighttime errand for him. I made a joke about how it's totally Brad's fault she's dead, but to my surprise the movie actually addresses this, and bluntly too! I'm impressed. I liked the metaphor about the opponent that beats you without even laying a single punch.
The grandpa was a good addition. Wise and incredibly clever, acting as a bridge between the feuding generations. His funniest moment was when Jack is following the White Queen, and he asks what he's doing in such a befuddled tone it's like he's 30 years younger. Another moment is near the end, when Jack and Brad come across three portals. Grandpa tells them it's most likely the middle path, but Brad instead says he's got a good feeling about another one. A now more trusting Jack instantly agrees with his son and they go through... only for it to be the wrong portal. Turns out it was the middle one after all, you dopes! Shoulda listened to granddad. 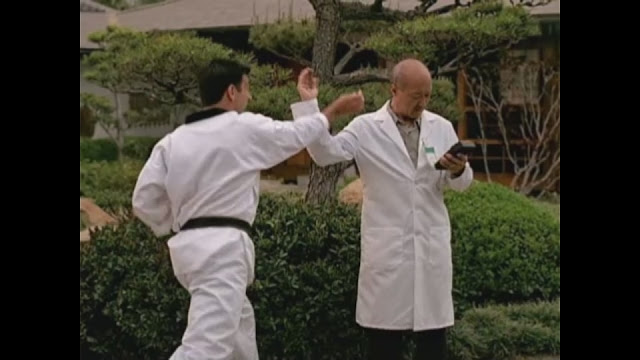 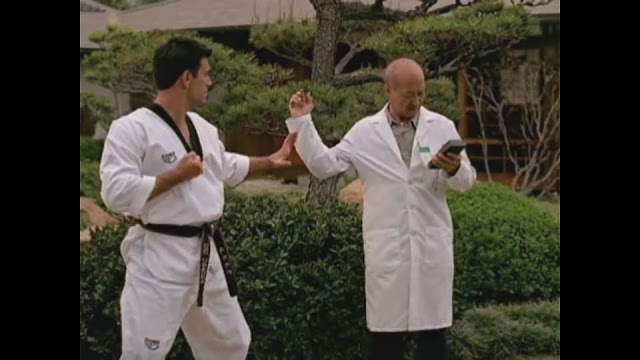 The rest of the cast is alright, but underdeveloped. Cynthia Rothrock's scientist character (and potential blind date for Jack) is the best. Then there's the FBI agent, who's mostly superfluous. Where things get confusing is there being two different vampy femme fatales. I was so confused! Jack defeats the first one, causing her to concede and tell him where to go next, but as soon as the next level starts she's suddenly back again, and still evil? It took me longer than I'm prepared to admit before I realised they are two separate people. Who just so happen to wear black leather and make innuendos and threats.
What I appreciate most of all however is this: Sci-fighter actually understands how games work!!! So many movies about video games just don't get it, (as if there's much to get?), but this does, so I respect the hell out of that. 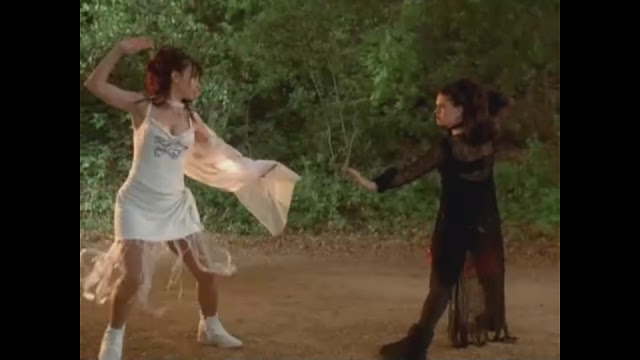 The effects are pretty decent, with some alright CGI. The film does have a charmingly cheap feel to it at times, most notably the VR helmets, which look like bicycle helmets with Christmas lights stuck in. The horned guy looks good, though it's perhaps a little too small, making you wonder why they even bothered.
The locations are neat. There's a mix of natural places, pagodas, streams, beaches, quarries, etc, as well as a few street fighting areas. I do have to wonder too if the final battle's environment shift was due to a lack of budget to keep all those extras in place for the shooting time. 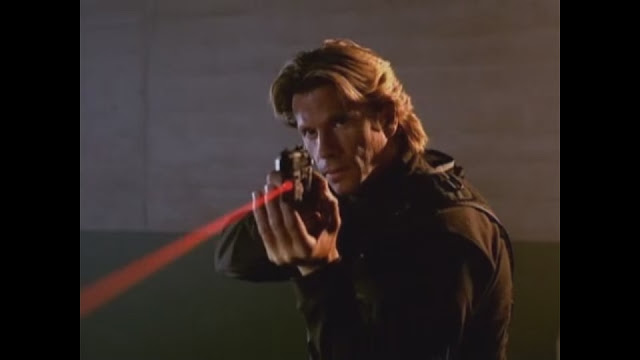 The actors all do good jobs. Don 'The Dragon' Wilson is a reliable lead as ever, the role of a dad working with his advancing age (but he's still got it, make no mistake). Aki Aleong is adorable as the grandpa, and Dan Mayid is quite good as Brad. A rebellious teen like him could have easily come off as bratty and annoying, but he's fine, and handles sensitive moments later on well. Cynthia Rothrock is decent enough, while Lorenzo Lamas is just plain underused. He never even fights, despite being the most high profile fighter in the film next to the two leads. As for the rest of the performances, some are good, and some are just plain bizarre, such as Chris Casamassa's. Then there's the downright awful monkey man. Whoever told him he was funny was a black liar!
The music is all good, with some nice tracks here and there. Nothing great, but nothing bad. The most amusing song in the film is the hilariously on-the-nose rock song that plays over the climax. It's all so earnest and unsubtle with its lyrics, while trying to sound cool. And it sounds good to boot, if you like that sort of music. 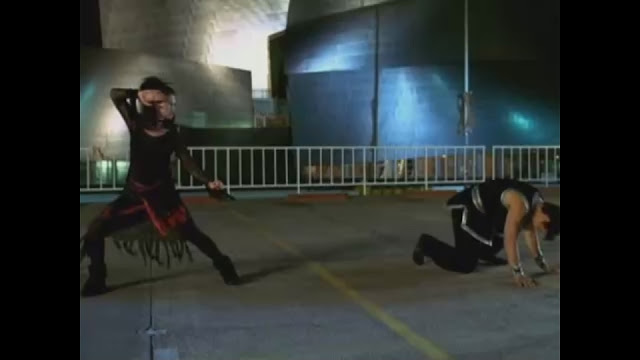 To finish, Sci-Fighter is an entertaining time, and a great introduction for anyone interested in Don 'The dragon' Wilson. It's not his best film, but a good time nonetheless...
Posted by Chris Hewson at 8:48 AM