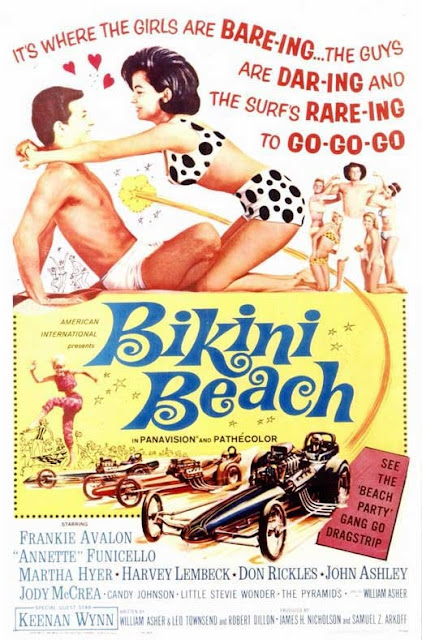 The gang at the beach are having their usual fun when they receive two unexpected visitors. First is international music celebrity The Potato Bug, who drives all the girls crazy, but baffles the boys. Second is the talented monkey Clyde, who frequently shows the teens up at their own activities, all as a ploy by the scheming Harvey Huntington Honeywagon III, who is determined to get rid of these sex and surf obsessed teens off the beach so he can expand his 'Siesta by the Sea' old folks home... 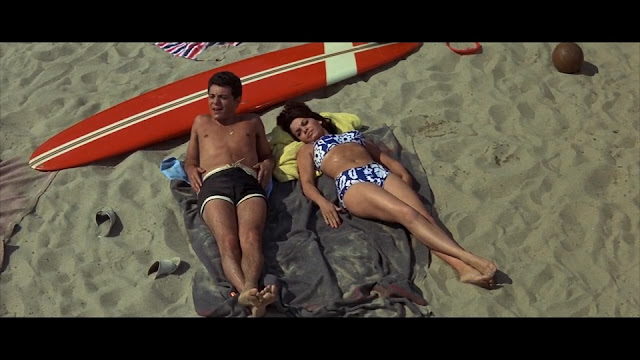 Bikini Beach is another fun entry is this series. It has all the expected shenanigans, and a few more. It improves on past entries in a few ways, and even though it's not a perfect film, it's as entertaining as it needs to be, and is one of the best in the Bikini cycle.
While there's plenty of time for the sun and surf, the movie also focuses on drag-racing, in a way that manages to be enjoyable even if you're not into that scene (me, case in point). 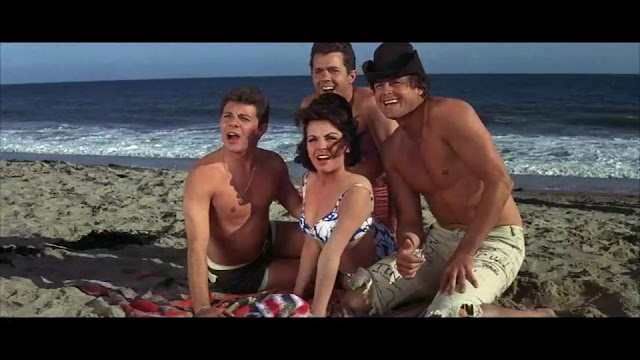 The story is an engaging one on all fronts, never boring, and never overstuffed either. While it is a shame that the teens (besides Frankie and DeeDee) mostly get overshadowed in what's supposed to be their own movie, it's ultimately not that big a deal here. The first big story focuses on Frankie's grudge against the Potato Bug, which leads him to try and one-up the singer in his sport of choice-drag racing-which leads to more troubles when DeeDee voices concern at such a dangerous sport.
The second story, running very fluidly alongside the first, is that of Harvey Honeywagon, who is often trying to demoralise the teens, all while reporter Vivian follows him around, trying to get the old buzzard to see reason and change his ways.
Something I liked here is the idea that everything he makes Clyde do is fun, and seen positively by the community, but it's his intent behind doing this that makes it bad. Everyone's all having a good time seeing the monkey surf until Harvey tells them in no uncertain terms it's because they're all [fucking] idiots. 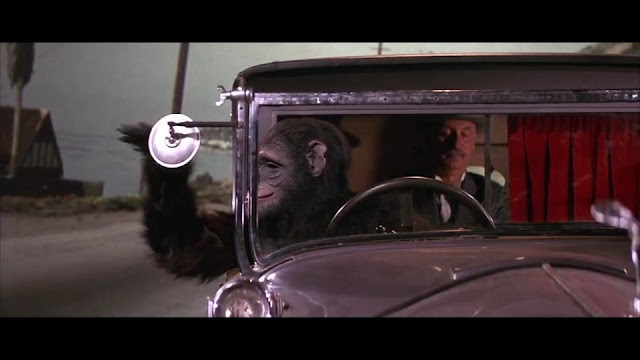 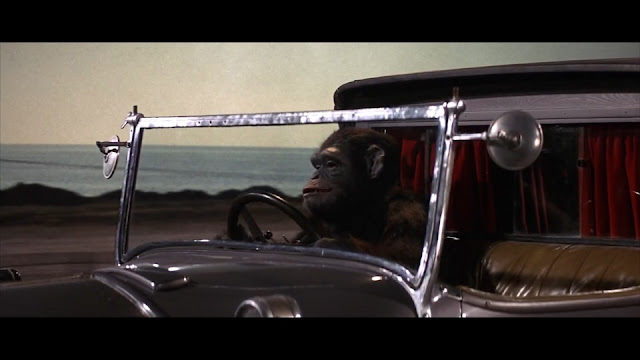 My favourite moment of the story was when a royally pissed off Vivian confronts Harvey after seeing his latest screed, and she dresses him down with the amazingly blunt and well-worded "You're holding a double-barreled shotgun, killing off the old folks while you kill off the fun for the youngsters. I guess it never occurred to you that the beach is a place to live, not to die."
As for the romance that develops between them, it's nice! A little sudden perhaps, and certainly played subtly, but it's sweet. Although the apparent (but nonexistent) age gap between the two does surprise one at first.
The romance between the two leads goes through all the typical stages. These two break up more times that Liz Taylor and Richard Burton! Frankie is level-headed for the most part, though naturally goes overboard with some of his stunts, pissing off DeeDee. She comes off a little mixed too though. Either she knew Frankie was pretending to be the Potato Bug the whole time they talked, or she's a two-timing chick! Thankfully she does eventually see reason, and support Frankie and co. when she realises it's become a genuine and sincere interest for them. 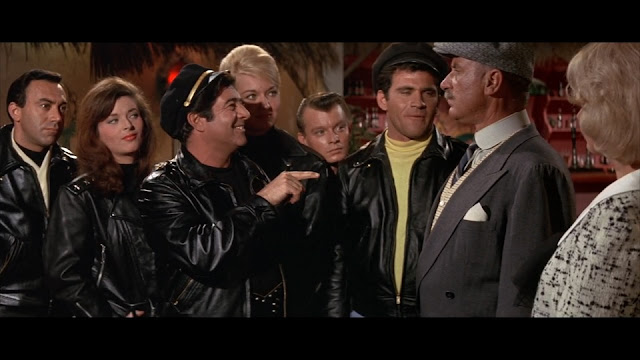 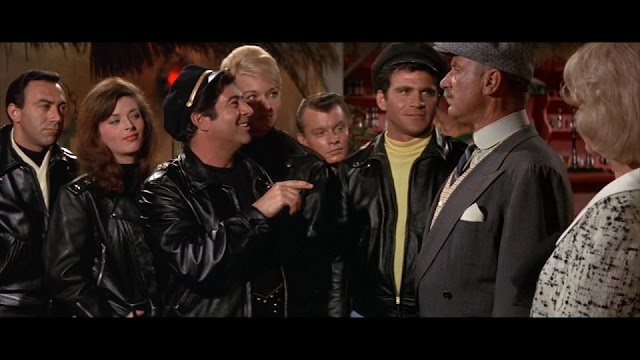 Eric von Zipper and his gang continue to be the series highlight! They are so sweet, and adorably wholesome. You can't stay mad at them, even when they try and sabotage the heroes' races.  All their catchphrases and lingo is back, and used in hilarious ways, like when they're having a snoop-around after dark, and promptly bellow "RIGHT!" on impulse when Eric gives the instructions. Bikini Beach contains probably the greatest comeuppance the Rat Pack ever get. Normally they get off scot free, or are minor obstacles in the grander climax, but here the whole final chase and brawl is devoted specifically to getting back at them. 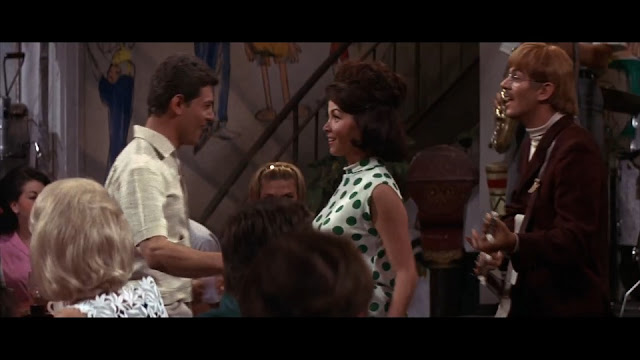 The movie climaxes with a silent film inspired chase scene. It's admirable seeing the respect these Bikini flicks had for the old films and stars! It always feels earnest, and never taking the piss. Though it's a little disappointing that it deprives us of a proper race, to finally settle the feud between the Potato Bug and Frankie.
The actors here are all fine. Keenan Wyn is his usual gloriously-voiced self, while Martha Hyer plays off well with him, the two sharing good chemistry. Clyde the monkey does a spectacular job, and I'm sure the Screen Apes Guild can be very proud that one of their own has done so well. 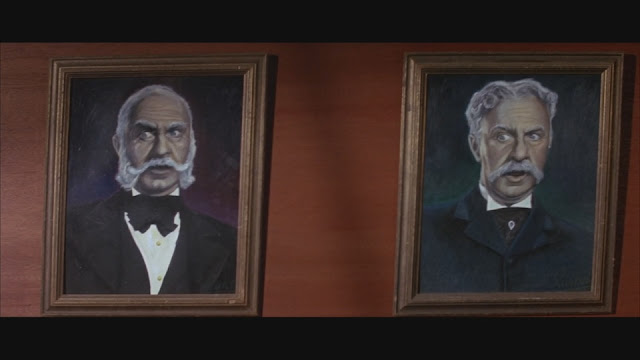 The 'teen' regulars all do fine jobs, as expected. Frankie Avalon gets the most to do with his double role, also playing the Potato Bug. Whether or not he is funny or the most godawfully annoying thing on planet earth really depends on you. Personally I'm half and half. In some ways he really overdoes it, and he's such a ludicrously exaggerated Brit (embodying all the stereotypes Americans think about England) that any English people watching might wanna chop his balls off. However, I'm not British, I'm Australian, so I find it bloody hilarious! 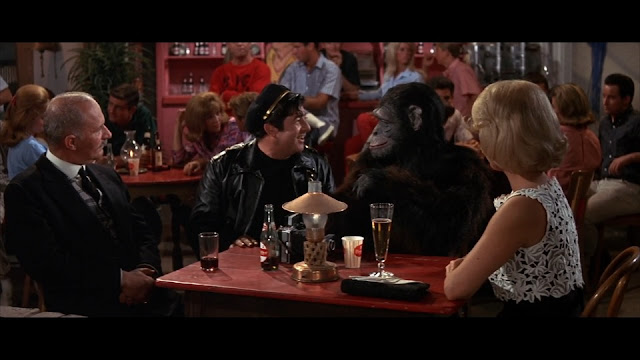 Likewise, the singing is great. Annette sings with syrupy smooth tones, and Frankie does well with both characters' voices. I feel the movie does a good job mixing the Potato Bug's nasally British twang with a genuinely Beatles sounding track. Definitely more exaggerated, of course, but they're not totally over-the-top either.
The songs are nice throughout, with the aforementioned rock ditty's, the perfect introductory track, and Annette's emotional ballads, such as the charming duet Because You're You. 60s shindig girl Donna Loren gets a fun tune, as do popular band The Pyramids, and 'Little' Stevie Wonder. Some of those are in the forefront, while others are more in the background, and they work fine, even if many of the movie's songs are 'filler tracks'. 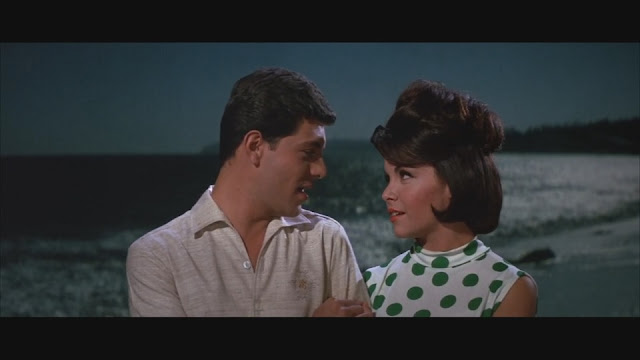 Bikini Beach is yet another score for the series, proving that it could still entertain and keep things fresh...
Posted by Chris Hewson at 7:57 AM