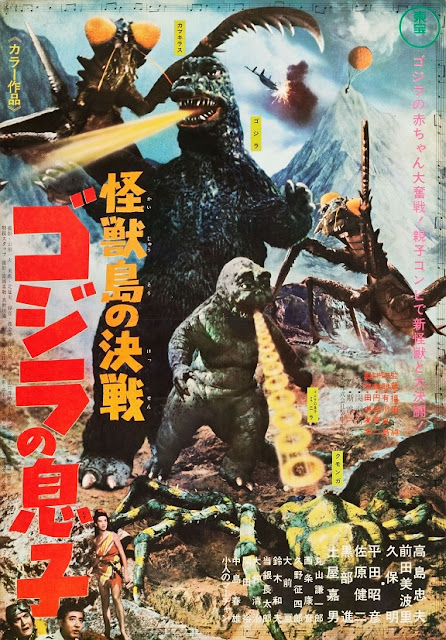 Plucky reporter Goro flies to the tropical and isolated Solgell island in search of of a story, and finds it immediately when the research group stationed there tell him to clear out. Now convinced this place is of interest, he stays put, and is made to earn his keep by the others. Learning they're conducting experiments into weather control, Goro witnesses a test gone wrong when the radar is jammed, creating a temporary disaster. He investigates deeper into the island, finding not only the daughter of a long lost scientist, and a bevy of giant praying mantises, but also a mysterious egg... 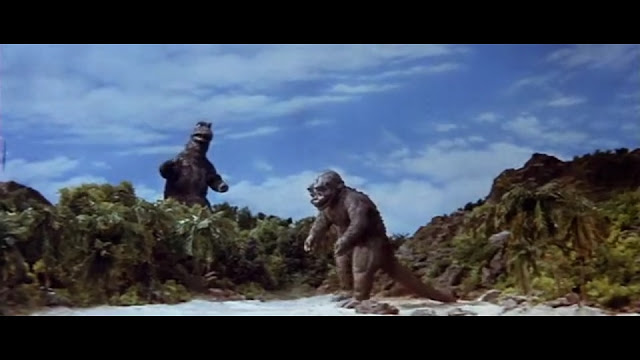 The Godzilla series had pivoted firmly into more child-friendly territory by this point, and comparing this film with the first is like night and day ([especially since that's in black and white!]), but that's not a bad thing. I never found myself comparing the two unfavourably. This isn't the kind of film that'd only keep 4 year olds entertained and have even 10 year olds with their intelligence insulted. It's easily watchable for all ages, with something for everybody. 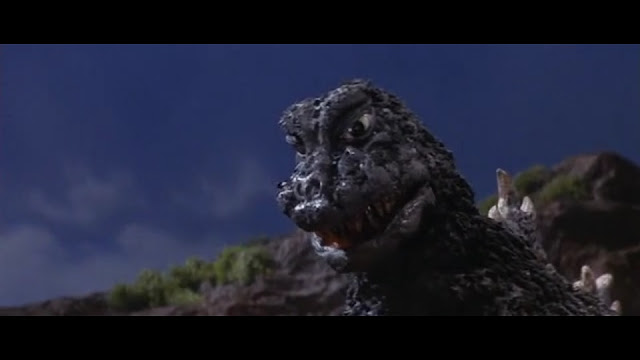 It possesses a sense of humour that always entertains and never verges into the farcical or stupid. Overt silliness is kept to a minimum, with the comedy coming from Godzilla and his son, and the antics they get up to (from his battles with the gimantises, to learning to breath fire), and the humans keep things tempered.
The monster plot is a great visual story. Making his debut in the series is Minilla (or Minya, which is irrelevant since he's never actually named in the movie), the absolutely adorable son of Godzilla. He's sweet and fun to watch. It's engaging as we watch this story of Minilla learning to become a big and strong monster and earning his father's respect, and Godzilla learning to be a good and accepting father. He is new at this and needs all the encouragement he can get from us! 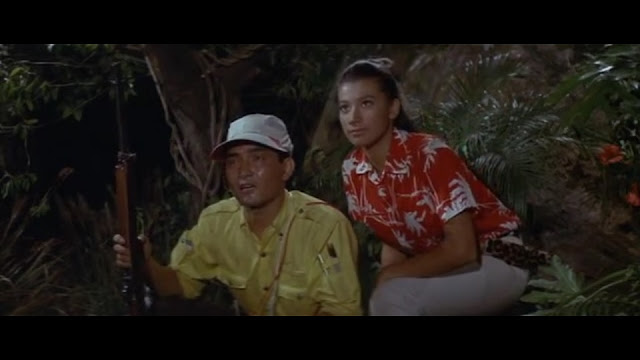 The human plot is fairly standard, but perfectly serviceable. It ticks all the boxes. Brief, set on a lush tropical island, with at least one scantily clad native babe, and containing some fun technobabble. The whole weather experimenting is a neat hook for the story, and delivers some minor social commentary on scientists tampering with the elements, [though this is never really explored much.] Overall the human story has a simplicity to it that means it never gets overcomplicated or hard to buy.
There are some areas I found lacking though. For a start, there's very little exploration into the whys of Godzilla becoming a daddy. How does he have a kid? Where is the mother? Why was the egg on this faraway island? At least some of these problems could have been fixed with maybe more screen time. As it stands the monsters appear decently throughout, but more screentime wouldn't go unwanted. 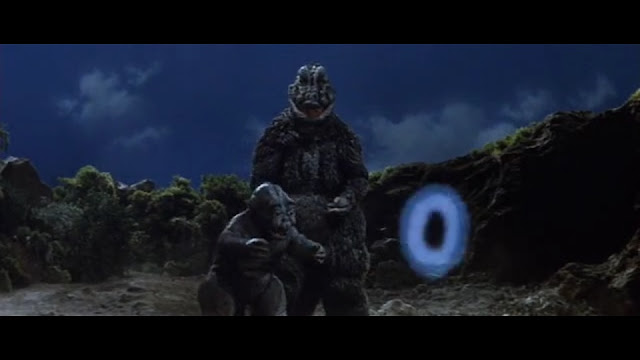 Onto the characters. Enterprising reporter Goro is a surprisingly likeable lead. He's the kind of knobhead who has himself airdropped into a sensitive location, then uses the fact that he has no way home as an excuse for staying. With this in mind, it's a pleasant surprise that he ends up befriending the others, working hard, and becoming an engaging enough hero as far as kaiju movies go.
Native island girl Reika is a good sidekick. She's not totally a warrior woman, but she has her moments, and is often clever and resourceful, [even if she does flail around a bit here and there].  The Professor is like a mix between dedicated scientist and loud military official. He's fine, both tough while also having a sensible and goodhearted side. Resident grump Furukawa has a consistent tendency to go crazy and run around with a loaded rifle. Despite this the others never think to tie him down. Luckily he never does anything seriously bad, and it is at least understandable why he'd be increasingly antsy about being on an isolated island full of monsters.
Ever since its release, many have been quick to dismiss Son of Godzilla, some more unfairly than others. They often take issue with the movie being so goofy, and with Minilla as a very concept. But many have been kind to it also, and it's developed a good reputation over the years. Probably because it's just a hard film to dislike. As I've said before, even the worst Godzilla film is still light years better than other dreck. 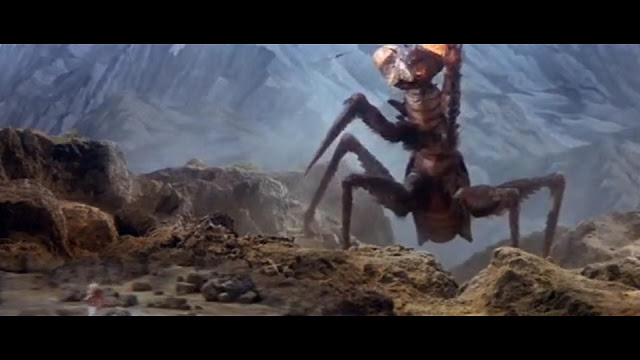 The effects here are all fun and effective. Cheesy, with Godzilla looking more cartoony than usual, and Minilla's first outing has the costume has some rough edges, but by and large they still look good. And even if they do sometimes resemble muppets, they still look like big damn muppets! The other monsters look good too, with the Gimantises and Spiger (Kamacuras and Kumonga in the original Japanese)  and the fact that they weren't animated by people in suits makes their movements all the more impressive, especially given the dynamic action scenes, and how they fly and flail around, convincingly too!
The island setting is lush and pretty. A mix of location work and convincing sets, it's great to watch, and is helped by the fine direction. The monster fights are also well choreographed. 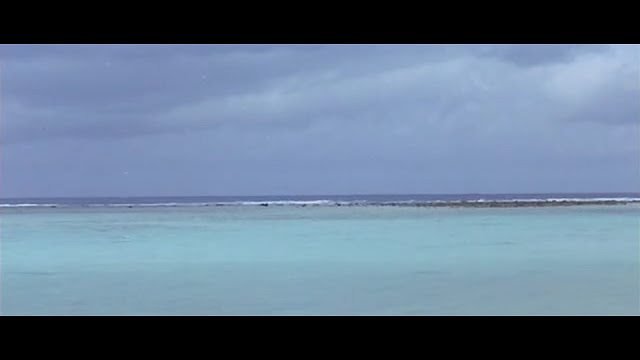 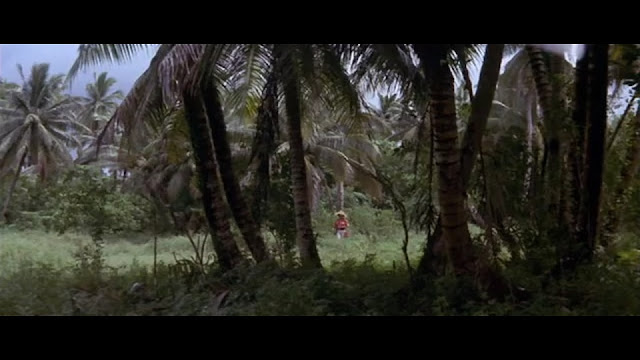 Some of the Godzilla films could get treated pretty roughly/shabbily when translated to the American market, but Son is one of the better treated ones. The scenes aren't reshuffled or deleted, music isn't removed, and the story isn't changed. It's basically just a standard dub of the original, in order from beginning to end. Cheesy in that fun and endearing way that these kind of dubbed pictures often are, without being obnoxious.
The actors all do fine jobs, though the dub actors really should've kept their voices to a whisper in some scenes ("THIS IS WHERE THE SPIGER LIVES!" "WHAT, DOWN THERE?"). As for the monsters, Godzilla delivers a good performance as usual, while  The sounds he makes could be annoying to some with their donkey-ish braying, but they're not too bad. 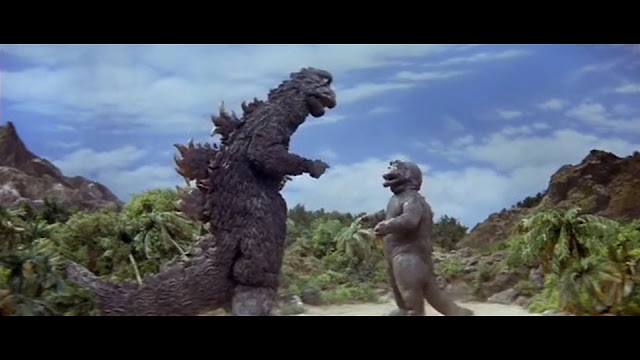 Son of Godzilla stands as one of the cheesier points in the series, and also one of the most heartwarming, telling a story of Godzilla as a father with a straight face, and would lay groundwork that would never be forgotten and brushed under the rug, either! If you're a fan of the series, and giant monsters in general, this is worth checking out...
Posted by Chris Hewson at 2:13 AM