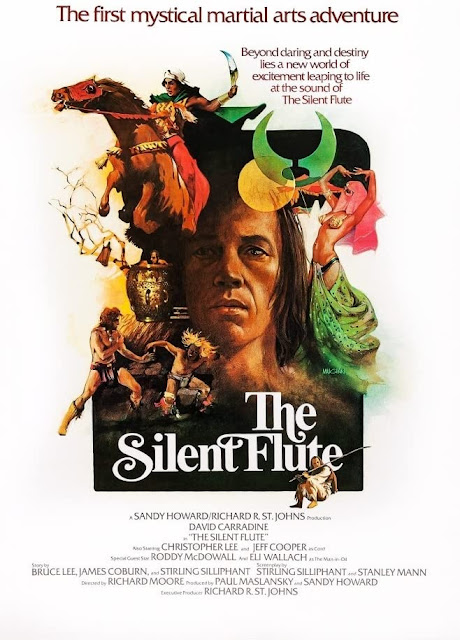 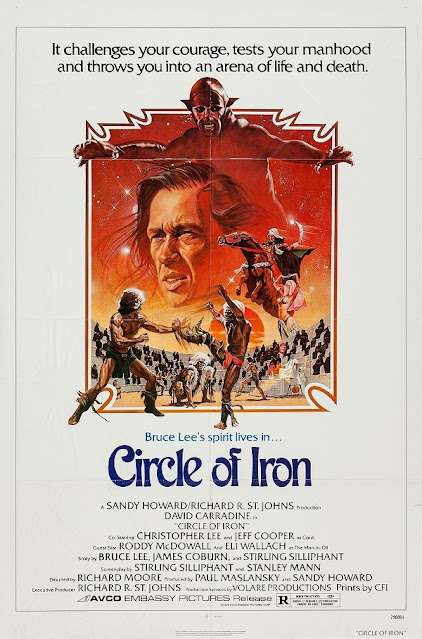 Bruce Lee was a man brimming with ideas. One such idea was the script for The Silent Flute, penned with the assistance of his friend James Coburn. Inspired by old Chinese fables, the project was due to be one That starred Lee, but he sadly didn't live to see the movie it would eventually become. I'm sure his spirit is glad that it did at least get made though, for all the world to see... Skilled fighter Cord competes in a tournament to decide who will next trek into an unforgiving wilderness to go through three trials that determine who ultimately faces the mighty Zetan, keeper of the book of enlightenment. Despite losing on technicality, Cord journeys onward anyway, and as he embarks on his journey he meets up with a mysterious blind man whose skill far surpasses his own. The man is a wise teacher, who tries to impart cryptic information to Cord for the struggle ahead. The brash young fighter must do battle with animalistic fighters, deal with the wiles of the menacing Chang-Sha, as well as death itself. With all these adversities, both physical and spiritual, will Cord ever make it to the ultimate source of human understanding?... 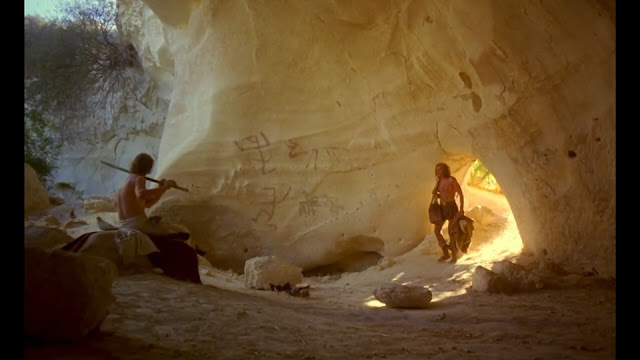 The Silent Flute feels like an ancient parable brought to the silver screen, with a plot that's heavily philosophical, and thematic of a journey to inner peace. Whether or not one is satisfied by the ending is up for debate (I love it, but others may well go 'NNOOOOOO!'), but it's at least good in that respect, that the ending can have multiple interpretations and opinions. 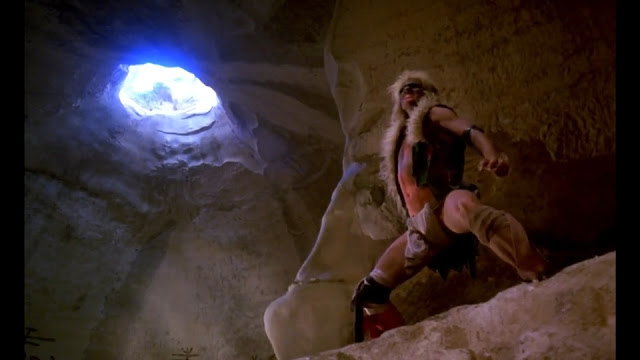 The writing itself is mostly very good, with many dialogue highlights, mainly from the blind man. Coming across like a mix between Confucius and Charlie Chan (you better believe I mean that as a positive!), he spouts proverbs such as "Tie two birds together, and though they have four wings they cannot fly","The only thing the sharpest sword cannot cut is itself", and "Try as you might, you can never step on the same piece of water twice". At one point Cord has heard one too many of these aphorisms and proclaims "And horses don't have udders, cows can't whinny, up is down, and sideways is straight ahead!". Besides all this, the blind man gets some great put-downs against Cord. 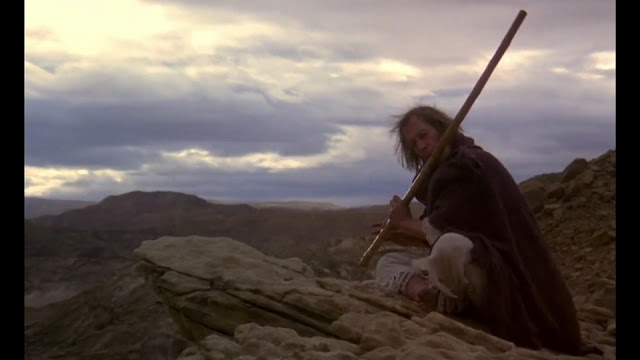 The plot is never boring, always going from one thing to another with just enough time to take everything in. The trials themselves though I'm not so keen about. The first is just a random fight, while the second is in no way cohesive as a trial, and is very specifically tailored for Cord and no-one else (and the third trial is a mere extension). I also wonder how real any of this is for Tara. Does she really exist? If so, how does she feel about being a living person who only exists to die and teach a random guy she's only just met a thematic lesson about his inner self? And if she is real, that makes Cord's somewhat jovial reunion with Chang-Sha more than a little bit strange. "Was it not I who killed her, with these hands?"-Cord: "No, I did, with these hands". Umm, I get the metaphor and all, but Chang-Sha totally crucified her! Just maaaybe he's a little at fault! 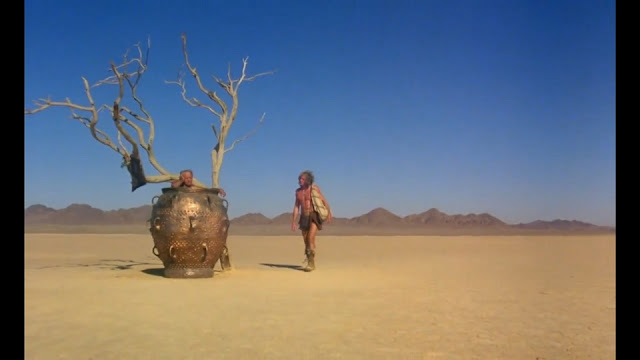 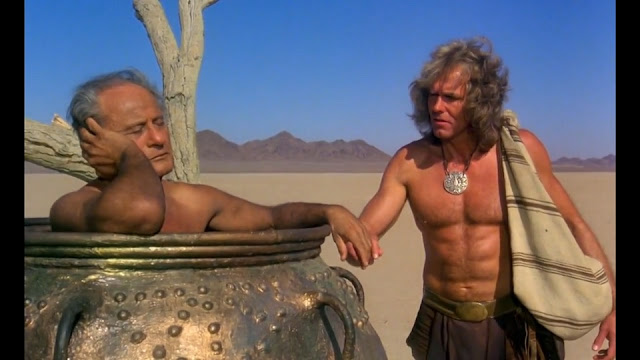 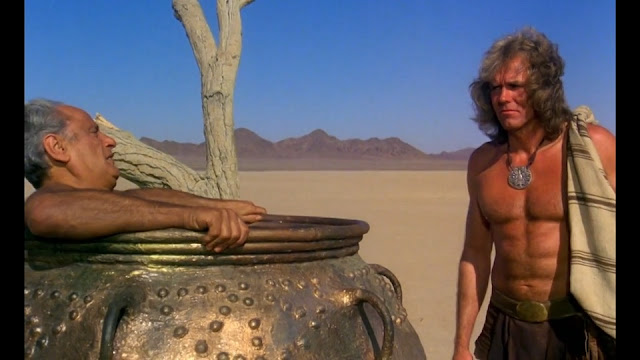 On that note, how much of the story's events are really happening is an interesting thing to think about. Given how certain events play out it sometimes feels like the whole region Cord travels through is like a living trial area. Vast and teeming with real people, but each serving a predestined purpose as part of a greater plan.
One last note to discuss is that it's kind of a shame Morphon dies as early as he does. Not that I object to him dying, as it serves the script well (Sorry, Morphon!), but I wonder if it perhaps might've had greater impact had he stuck around for a longer time beforehand.
David Carradine, once again filling a role meant for Bruce Lee, He does very well as the blind mentor, and reasonably fine as Chang-Sha despite the sometimes silly accent (the character is more Arab despite the Chinese name), but his turn as the monkey leader is pretty bad, and he's so-so as the fleetingly appearing Death. It's a bit odd how he inhabits multiple roles, with this not getting much explanation. What little we do get only comes at the very end, and it's barely worth mentioning. 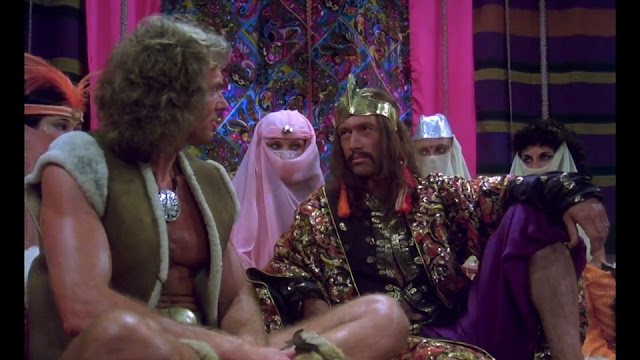 Despite his atrocious hairstyle that makes him somewhat resemble a middle-aged woman, Jeff Cooper mostly does well as Cord, despite a sometimes wonky line delivery that gets downright hilarious at times (CHANG-SHAAAAA!!). If nothing else, the guy has an infectious smile.
As evidenced by the abundance of 'Guest starring...' credits in the intro (despite being a movie), the majority of actors in The Silent Flute only appear for one scene, with Roddy McDowall, Eli Wallach, and Christopher Lee each getting what amount to extended cameos. I kinda like how the movie doesn't have a consistent cast. It makes it feel like a real journey, never visiting the same place twice.
There's a fair bit of fighting on display, and while it's not all the movie cares about, it's still a pretty big part of it. The choreography ranges from ok to quite good. What I liked most was how we see characters observe others in combat, and learn from their movements, using a different fighting style than the previous opponent and keeping and eye out for all their tells.
As per its title, this movie has a predominately flute-based soundtrack, and it's nice, setting the mood perfectly, and giving off an otherworldly feel to events. At times it almost reminded me of Gheorghe Zamfir. 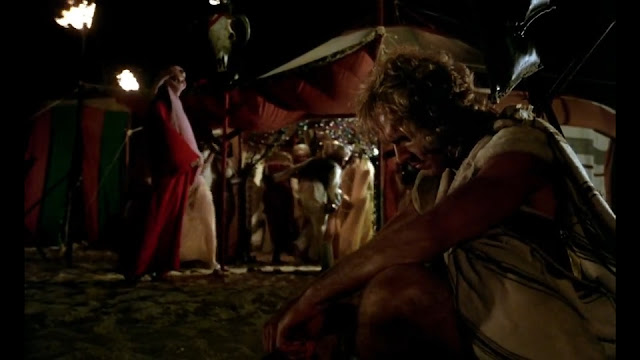 The effects here are mixed. The film has quite a cheap look in places, with cheesy visuals such as the monkey make-up and masks. The costumes meanwhile are as piecemeal as the cultures represented. I kinda like the universal mix of Chinese, Arab, Egyptian, and others, with the jumble giving this world a feeling of being somewhere almost familiar, but not quite The only outfits I didn't care for were the raiders in the riverside scene, who looked like they wandered in from a super cheap Roman movie. Finally, the locations and set design present are utilised extremely well! There are some very pretty moments. 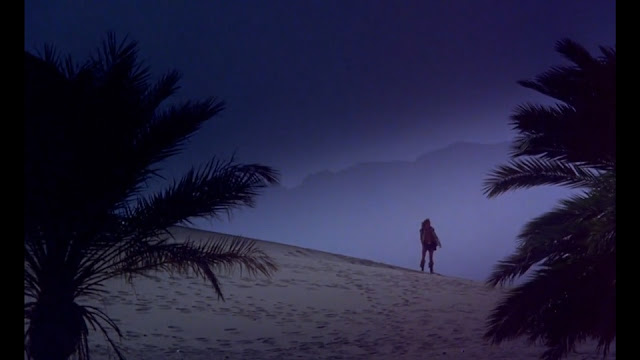 One last element of the movie to discuss is its name. It's called The Silent Flute, and that's even the name in the opening and ending credits, but it was and still is released and marketed as Circle of Iron, which is a pretty generic and random title, with little of the thematic connection that The Silent Flute bears. While we're on that note/chord* though, the movie never actually bothers to explain that the blind man's flute is silent! We hear it just fine, so we only have Cord's word at the end to go on that it's a quiet tune only he can hear.
*Look, I came across two unintentionally neat puns and I couldn't choose so I went with both, ok? 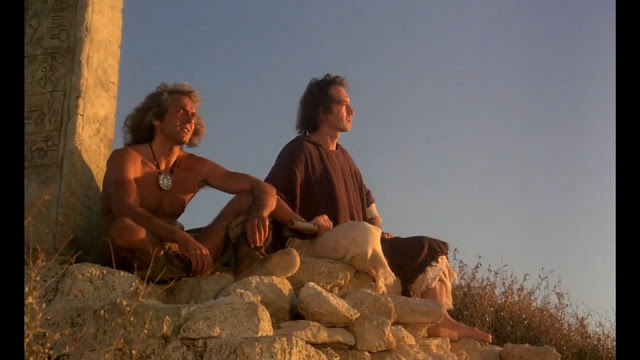 The Silent Flute isn't perfect, but it's a very interesting kung fu film, that tries to do a little more than just show mindless fight scenes. Nothing wrong with that of course, but it's good seeing more thought-provoking examples of the genre every now and then...
Posted by Chris Hewson at 8:51 AM