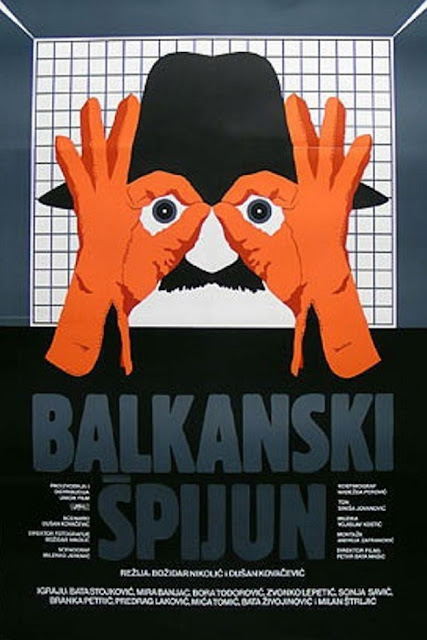 Hardworking but poor Yugoslavian Ilija was recently called in by the police to answer some routine questions about his tenant, Petar. They tell him things are fine. Naturally this makes Ilija think Petar is a spy of the highest order. Why else would the cops say this was nothing important? Feeling it's his civic duty to investigate, Ilija begins spying on the unsuspecting and entirely innocent Petar, his paranoia growing and eventually drawing in his unstable brother Djura. Together they progressively up their game until it seems like all of Serbia will know about this plot before the 'spies' do!... 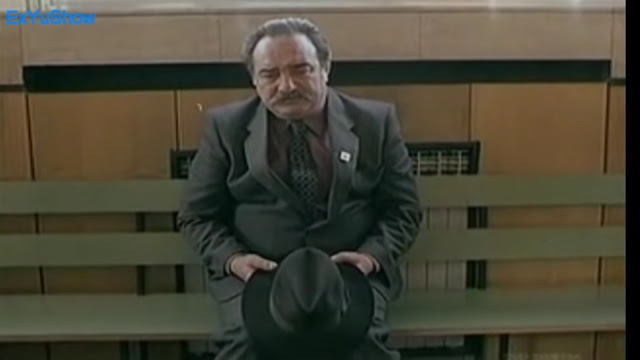 Balkan Spy starts off seriously, showing the frustrations and fear of living in a society where the slightest wrong question can spell doom for an already tenuous existence. But then a change comes over the film. We suddenly realise the police here are entirely honest, and it's Ilija who's the one chasing shadows, getting more and more unhinged as the film becomes funnier and funnier.

The movie is a series of comedy scenes that progressively amp up as Ilija and his brother begin to break more and more laws as their plans get crazier and crazier. The story itself is basic, in a good way, and is a great vehicle for getting all these scenes across, without the plot being too complex. 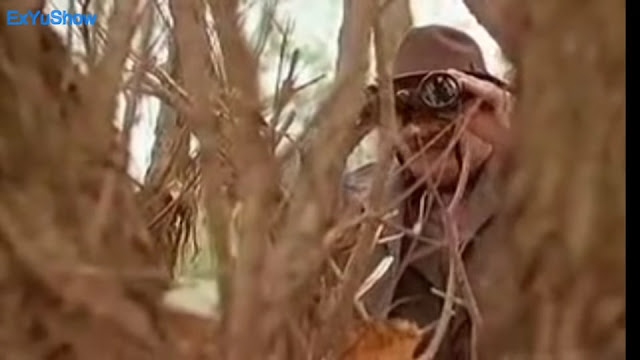 The comedy here is great. The dialogue is frequently hilarious and biting, just about everyone is the butt of one joke or another, and the setpieces made me laugh out loud at times. Everyone delivers these lines with such straight faces that it's a joy to watch.

Balkan Spy is made by its characters, namely Ilija. He doesn't know it, but he's really the title/titular character, not poor Petar! He starts off likeable enough, and you feel bad for the guy and all he has to put up with. Then he starts crossing a few lines, and then he becomes downright unhinged/deranged, and you can't help but laugh at either how badly or how well things turn out for him.

Something I like is that he's not just one-dimensionally crazy, but rather the film explores his psyche and backstory, creating the portrait of a man who genuinely thinks he's doing the right thing, and will go to any lengths to protect his country, regardless of how absent the threat really may be. 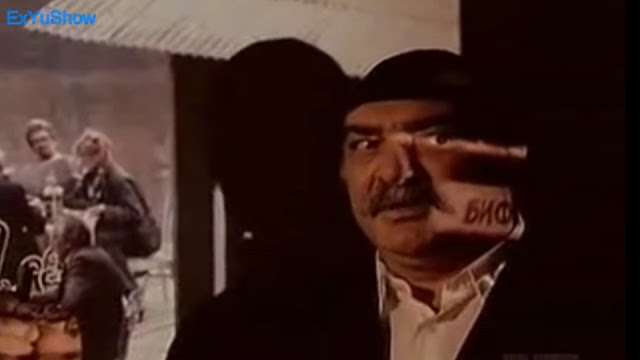 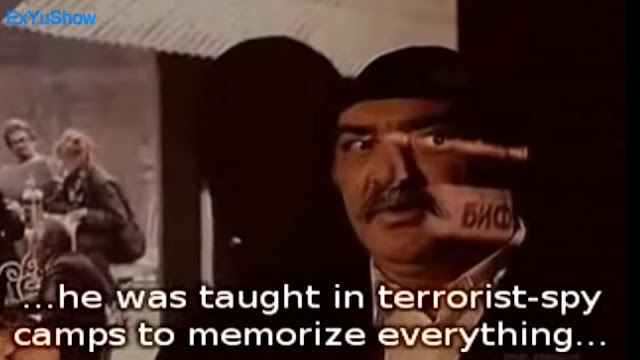 His brother Djura starts off seemingly normal, but gradually reveals himself to be just as crazy as Ilija, if not more, and the two brothers prove to be very bad influences on each-other!

Ilija's wife Danica starts the film as a long-suffering wife and ends the film as one, though in different ways. It's interesting watching how she reacts to her husband's deeds]. Their daughter Sonja is much more levelheaded in comparison, and quickly sees that her father is in need of help. She's likeable enough, though doesn't appear much, eventually just disappearing in the last half hour. And lastly, Petar is a random dude, who gets his own perfectly normal subplot, completely at odds with the paranoid story cooked up by his stalkers. 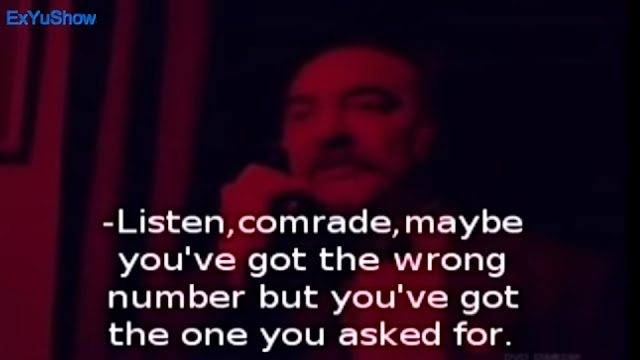 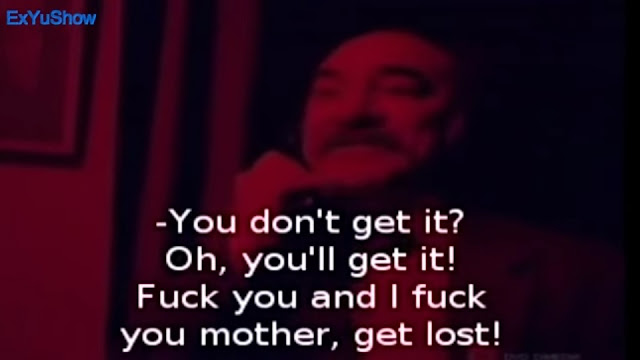 Balkan Spy isn't just a comedy, but also has some interesting messages, and neat symbolism. It's never too on the nose, nor too oblique/opaque. The most impressive moment for me was the climax, which is made up of a long monologue where Ilija espouses on his politics. It's fascinating to watch, and really gives the character life.

The acting here is great. Bata Stojkovic makes the film as the demented Ilija. He really sells everything about his character, and you buy everything about him. It's no wonderhe's one of Serbia's most loved actors. Zvonko Lepetic is funny as the lunatic Djura, with my only complaint being he looks so much like Bata I kept getting them mixed up in some scenes (though that's made up for my some hilarious moments). Mira Banjac juggles her character's various moods well, while Bora Todorovic and Sonja Slavic are good as the normal people. 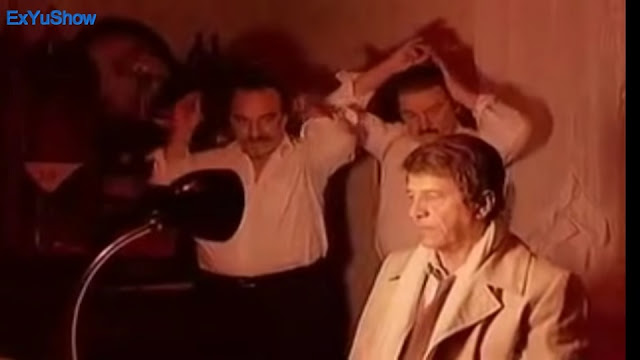 The music here is quite nice, with its traditional music, and choir tracks providing a good mix/counterpoint with the comedy spy antics, and the increasingly black comedy,

The direction by Dušan Kovačević impressed me too. Many shots are well framed, and very creative 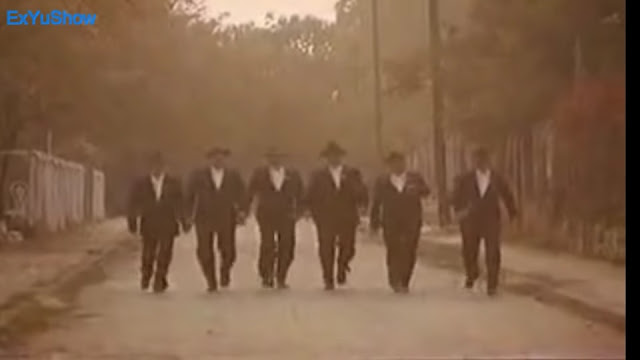 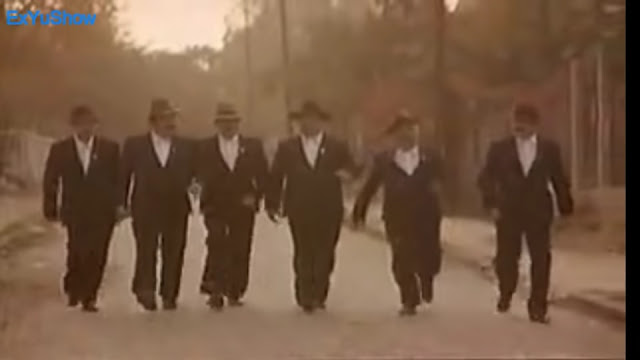 If you happen to be of the opinion that Yugoslavians/Serbians are crazy, Balkan Spy will not help alleviate that (at all), but will deliver a wickedly funny comedy that'll leave you thinking long after it's over...
Posted by Chris Hewson at 5:46 AM