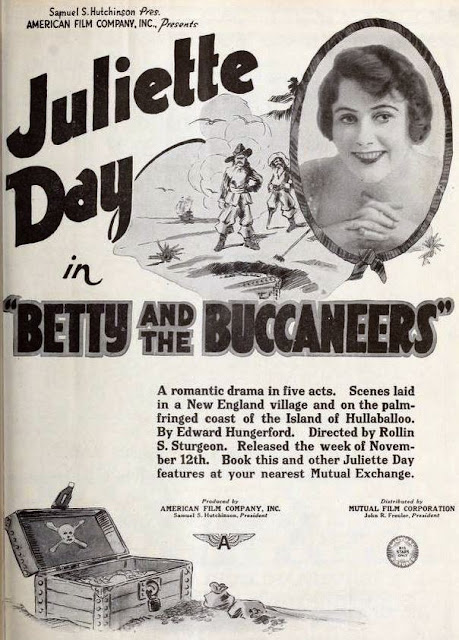 Betty is a young dreamer who yearns for adventure. She enjoys life at her country home with her doting but gullible father, but wants something more. This ends up coming when a band of sailors led by the sinister Captain Crook offer Betty's father a proposition, to take the antique coin collector to an island reputed to have a hidden treasure. No sooner than they get there however do the brigands knock him out and leave him for dead, sailing back home with the booty. It's now up to Betty to uncover their evil plot and save the day... 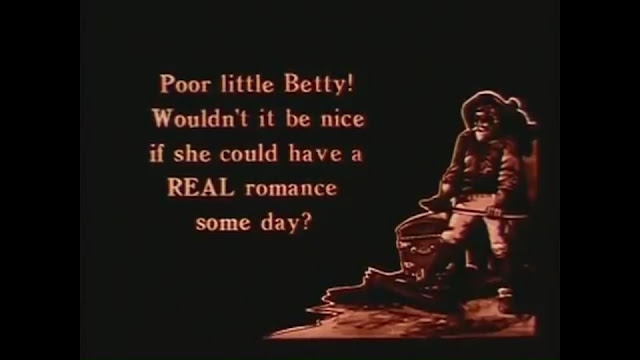 Betty and the Buccaneers is a rollicking silent adventure on the high seas (ostensibly), about an amusingly dreamy young girl who aspires to do great things, and to see great places. It starts off really well, establishing the characters well, and having a great sense of humour. I was looking forward to seeing what this girl got up to. Unfortunately here's where I stop saying nice things for a while.

While I was expecting a pirate adventure, with this girls dreas coming true, she instead stays home, and the sailing section is very short. Betty never stops foot off land, and even when the bad guys return to her home, having betrayed and abandoned her father on the island, she never stepped up to become the hero. More on that later. 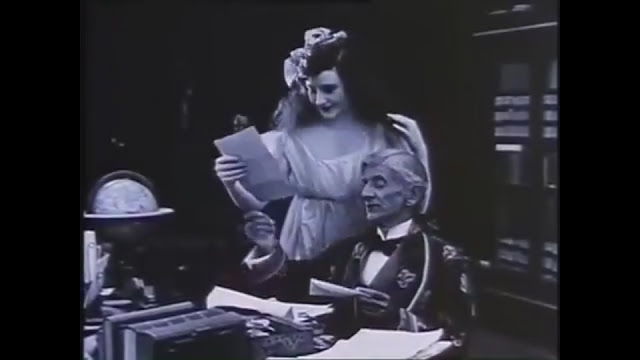 It feels like the film doesn't seem to realise what it had. The treasure hunt plot is resolved so quickly it's astounding. They're on the island for like a minute, and they immediately find the treasure, then leave! It should've been a tougher search, and that way Betty could have time to learn about their treachery, and come to the rescue. The film is called Betty and the Buccaneers, is it not? I hardly feel it's unreasonable to see her fighting buccaneers!

Then there's the disappointment that is the ending. After fainting like a useless lump, Betty dreams being rescued...then wakes up, the bad guys already having been stopped offscreen! Everything is ok...Except for the audience, who were actually expecting a climax. or for Betty to actually do something. To continue, let's discuss the characters. Betty starts out as an adorable and likeable heroine, and I knew she'd do great things as the movie progressed! As the film went on though she gradually wore on me. It's less because of what she does and more what shoe doesn't do. She hears word that her father's died, and she barely reacts! No tears, no wailing, she barely even frowns! Then she gullibly lets these = strangers into her home, despite them attempting to sexually harass her.

Her lowest moment comes when she's eavesdropping on the criminals, a sword in her hand. She hears them saying that before they skip town they'll go and get a kiss from her, so what does she do? Why, hides in her bedroom of course. The one place they'll go looking for her! And she hides under the bed, the worst tactical position you could imagine! Honey, you coulda jumped them with a sword! 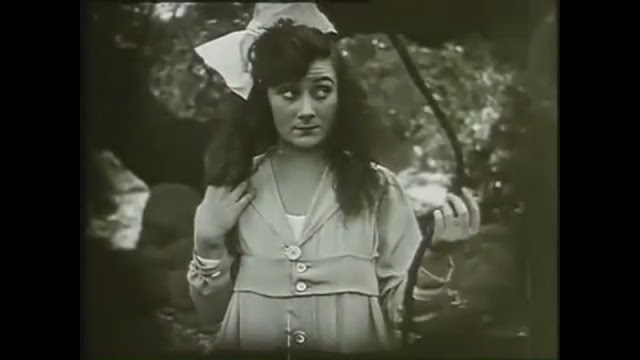 Her brief attempts at fighting soon after range from using a pegleg as a weapon instead of her sword, and fainting in the middle of the final battle and dreaming of others rescuing her. God, she's a rubbish protagonist!

The three sailors and their boss are an ok bunch of villains. They get some good scenes early on, and the sailors have such a fun comraderie that I was surprised they ended up being villains. These funny moments aside, they're pretty thinly characterised. [They start out as pretty lighthearted, but suddenly veer into evil by the last act.] 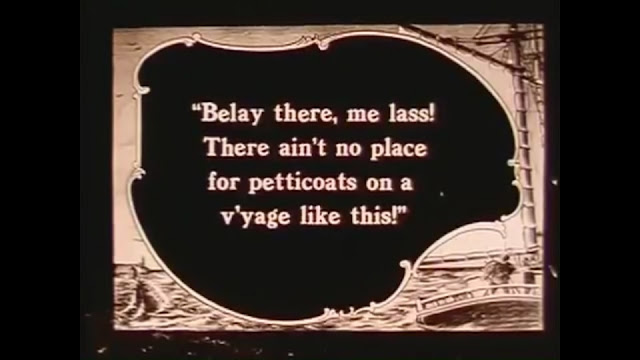 Their actions in the last act confused me, such as one weirdly racist moment, that comes out of nowhere. It's on the part of these villains, so don't worry, it's not the film itself. It's still weird though, seeing these previously goofy baddies be quite mean. It also didn't help that I honestly had no idea what was going on in that scene. The trio's nasty overtures to Betty are also quite ill-advised! Threats of rape in an otherwise cheerful family adventure story is a bit jarring.

Betty's father is a likeable and absent-minded guy. Trusting to a fault, but harmless, and you feel bad for him when he's tricked, and look forward to his rescue. Betty gets a love interest too, in the form of a handsome young government agent. He barely appears though, and only gets a couple of scenes with her, doing the bare minimum. Even at the end he only kisses her on the forehead! What a chump. Kidding aside, he's nice, and I wished he did more! 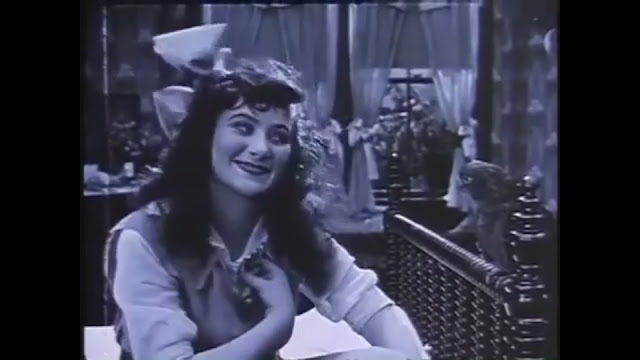 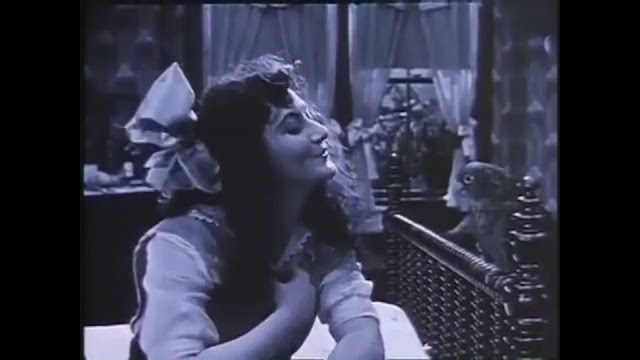 The direction here is quite neat! Many of the scenes are well shot, and there's one in particular that not only presages The Shining, but The Phantom Carriage too! Some scenes however are shot in a muddled manner, and confused me to no end.

The actors all do good jobs. Juliette Day is as cute as a button as the lead, while the villains are diverse and entertaining. Nothing really special here, but nothing bad either.

The visuals of this film are superb! I've never seen intertitles as intricate and detailed as this. Each have their own personalised illustrations, and framing, which make every one a sight to behold. Even if they do get a bit longer than most silent film titles, that's not a big deal, and they're often very funny. They really help the movie, and I wish we could've seen things like this in other pictures!

Lastly, the soundtrack. I don't know what score Betty and the Buccaneers originally had, but on youtube I found two options. One with Ode to Joy, which feels weird over such a film! And the other, that I watched, had a compilation of piano/organ pieces. It may not be original to this movie, but it's an absolutely wonderful score nonetheless, which really draws you into the film and fits the scenes well. The only issue I had is that they start looping before the film's end. I liked hearing these tracks again, though they don't fit as well over some of the more serious or climactic scenes. It's no big deal though. 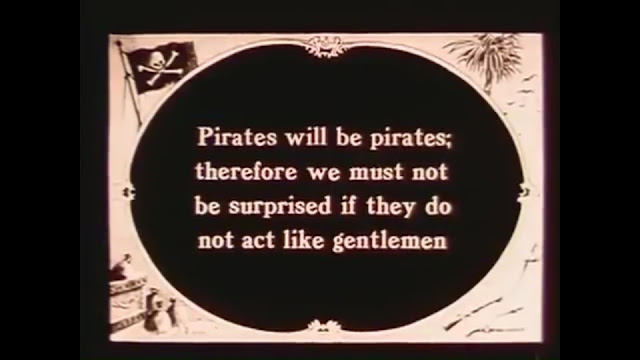 Betty and the Buccaneers was worth watching despite all its many issues, but I was still so disappointed by it. It's one of the most creative silent films I've seen, but if only the script saw as much care...
Posted by Chris Hewson at 8:34 AM