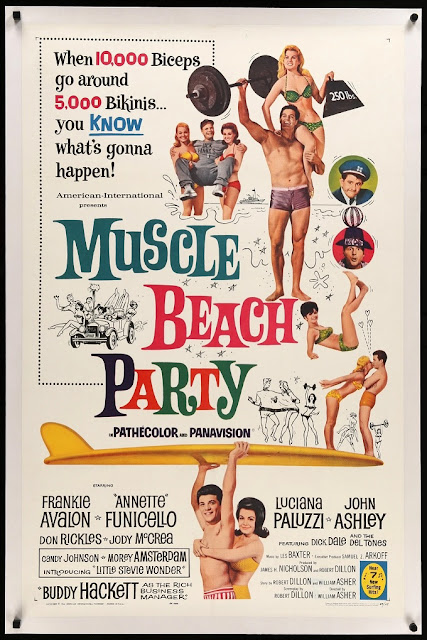 The Beach Party series was always a mixed experience, even back in the day. Audiences never knew what to expect with these movies. While they weren't always the best ,at least they were often unexpected! Although I can't help but wonder if the teens got a bit impatient with these films, and yearned for them to just focus on sun, surf, and sand, like all the ripoffs!...

Teens Frankie and Dee Dee and all their friends are back on holiday, and raring to go to the beach again to have some fun. They soon find some intruders there, as a bodybuilding group has taken up residence on one side of the beach. The two parties don't get along, and almost come to blows numerous times. Also in the mix s a millionaire who's just floated into port, and the sexy Contessa Julia, who has her eye set on Frankie... 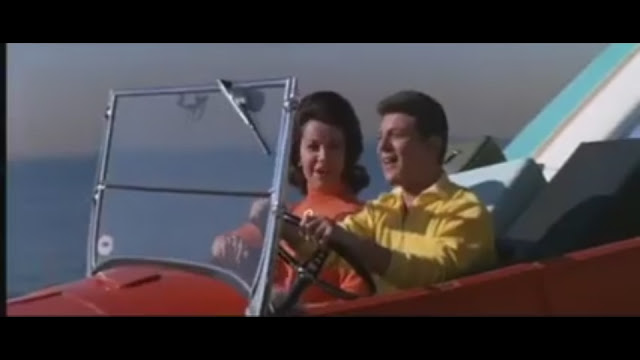 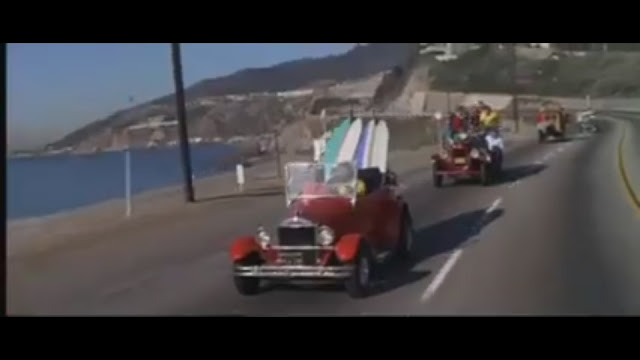 Muscle Beach Party starts out alright enough, but didn't impress me a whole lot. As it went on it gets better in some ways, but worse in others. First and foremost is the plot. It's ostensibly about the teens facing/squaring off against these bodybuilding intruders on their turf. Already a pretty tenuous plot considering these bums don't own the beach, and the muscle gang are pretty much doing their own thing, but oh well. What's frustrating though is that whole swaths of the film completely ignore this story, and  kept going 'Oh yeah' when it came up again.

The first big intrusion into this plot comes in the form of eccentric] millionaire S.Z. Matts and his hot Italian ward Julia. It's them who interact more with the bodybuilders, and when they're offscreen, the = have more than enough character to sustain their own scenes without Frankie and the gang. 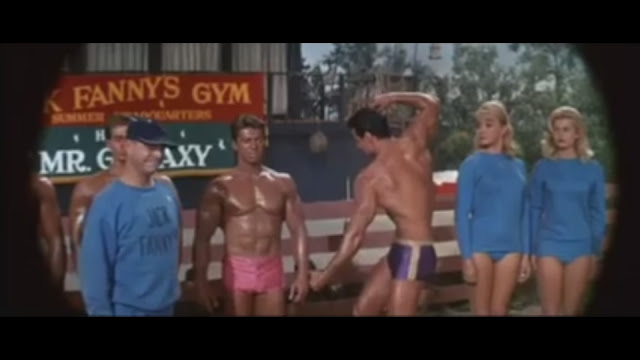 When we do finally cut back to them, they're a pretty vapid bunch. The movie does them a disservice, really. I don't mind these dopes being treated as an afterthought, but if only they were written as more = and dynamic, maybe they wouldn't get upstaged in their own darn movie!

The other plotline (yes, there are that many) is Julia falling for Frankie, and trying to spirit him away to become a famous pop star. This is perhaps the best storyline in that it at least has a clear beginning, middle, and end, and we clearly understand where everyone is coming from.

The movie flits from one subplot to another at will, sometimes devoting enough time to them other times not. There's one bizarre scene where the major altercation between teens and muscle the entire movie has been building up to (theoretically anyway) is immediately sidestepped by someone going "Surf's up!", and everyone goes surfing for [5] straight minutes. 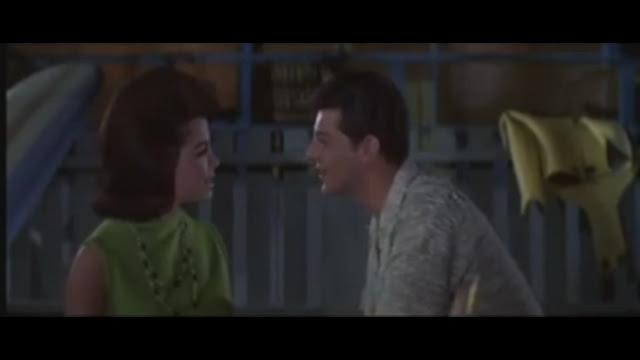 Perhaps the most unwelcome element to some might be the way everyone gets on Frankie's back, wanting him to do something with his life rather than bum around the beach all the time. I agree with them of course, but this isn't real life, it's a movie, goshdangit! This kind of story could work well in other places, but not in an escapist movie like this. I thought this was meant to be fun! Who watches a fantasy beach party movie to see lectures on doing better things with your life than wasting it on a beach?

The writing in Muscle Beach Party is middling ,with some moents not being the best, but others being well-crafted. The humour lands a fair bit of the time, and one scene was very funny. There's a great exchange of puns/retorts with Dee Dee and Julia, though it becomes too much by the end. You can have such a thing as too many puns, guys! 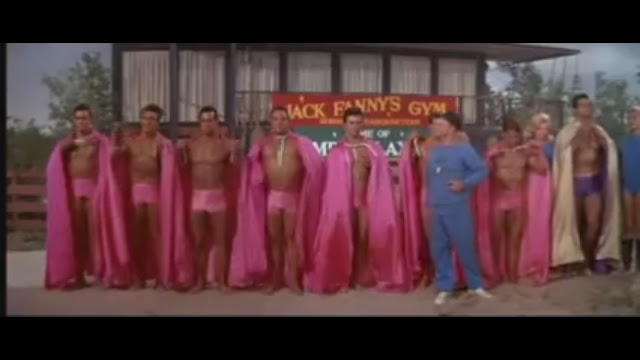 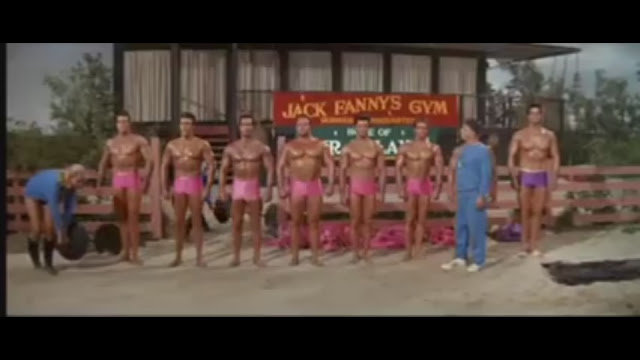 Muscle Beach Party is the second entry in the series, and its place in the canon is alright enough. The tone is dead on, with this film capturing the spirit of the series to a tee even if it's not the best of movies. We've got all the familiar characters, and all the new ones impress too (more on them below). There's sadly a few absences though. Eric Von Zipper and hit Rat Pack are sorely missed, even though they only would've added to an already bloated film. At least it'd be more entertaining with them!

Frankie is a pretty scummy lead character, although he eventually learns his lesson and stops cheating on his girlfriend. Dee Dee is by no means a doormat, and t's nice seeing how little crap she takes from her 'Bluebeard' of a boyfriend. The others like Johnny, Deadhead, and the amusingly named bikini girl Animal have decent roles, with their share of comedy moments, serious ones, as well as sexy in Animal's case. 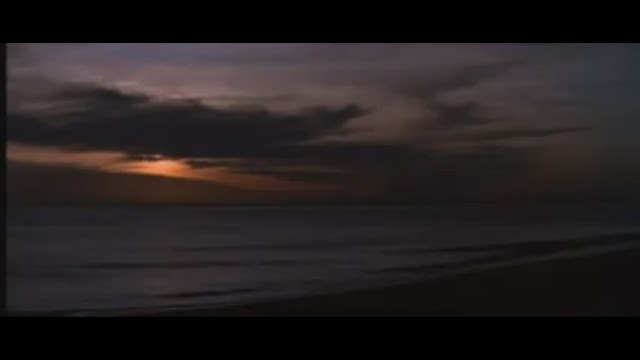 The muscle gang are pretty funny. They don't do anything but stand around silently, but trust me when I say they do it really well! The two girls do too. I don't know what it is, but they really nail an amusingly stoic nature that = their scenes. Their coach meanwhile is manic, sometimes to the point of annoyance, but he's mostly fine.

Lastly there's S.Z. and his crew. He's a likeable character. He's spendthrift enough to wanna casually buy Sicily, and to =, but he's never an idiot, and he's genuinely [likeable]. Contessa Julia, probably the closest thing the film has to a [villain], is delightfully = and playfully devious. She's got enough = and flippancy to be =, while having enough humanity to not be a villain, even if she is doing the bad thing.

The acting here is all fine. Frankie Avalon and Annette Funicello make for good leads. They share good chemistry, even if they do spend most of the movie at each-other's throats. He's your typical teen idol, and she's sexy! She's thankfully actually dressed for the beach this time, rather than being forced in a distinctly unsexy = outfit. 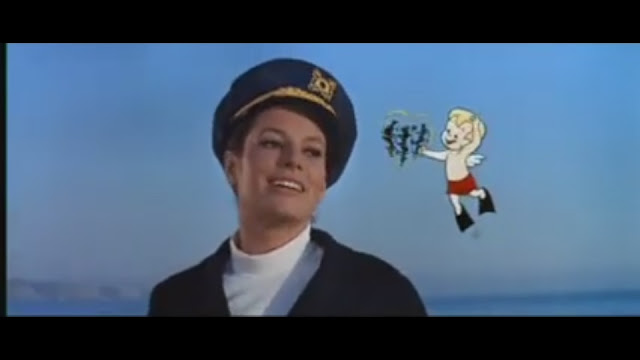 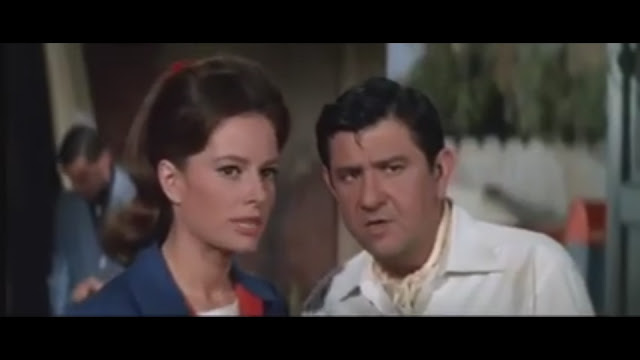 Italian bombshell Luciana Paluzzi (of evil Bond Girl fame) is great as the sultry Contessa. Equally neat/nifty is her fashion sense, including a gender-bending sailor outfit! Don Rickles is funny as the crazy coach. He's almost a bit much in some scenes, but he's good for the most part. The standout actor in Muscle Beach Party/this was surprisingly Buddy Hackett! Now I like him already, of course, but here he does more than act funny, stretching his dramatic muscles too, and it works really well. It makes his character feel well-rounded.

Everyone else does well (although I wanted to punch Morey Amsterdam on occasion), and there's an amusing surprise cameo later on. Doesn't make that earlier scene any less weird though, bloody hell!

This film is shot well, with the beach and everyone on it being staged nicely. The surfing scenes aren't the best, thanks to the obvious green screens, but it's not the worst. There are some quite pretty shots here on occasion, namely whenever the beach is filmed at night, and we can see the setting sun off in the distance. 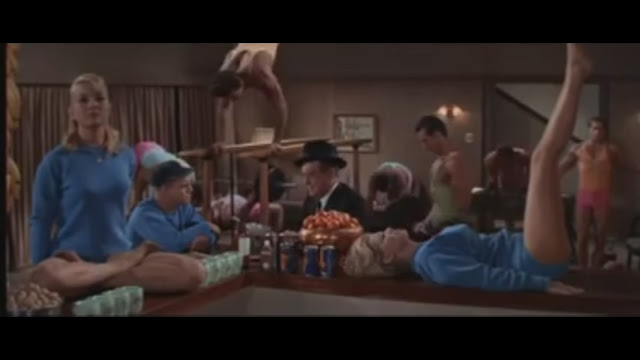 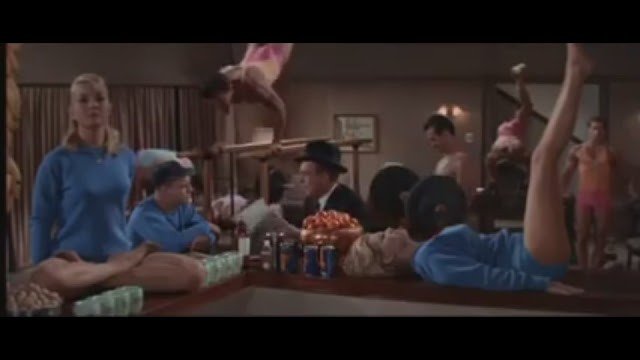 The music in Muscle Beach Party is alright, though very imbalanced. After the first number, it takes another 35 minutes to get another one! Then we get a couple in a row. The worst scene musically is in the nightclub, with Dick and the Del-Tones. Their song is fine, and starts off with plenty of attention, but is suddenly relegated to the background, interrupted by Frankie and Dee Dee's romantic squabbling, before their own song starts...and immediately ends again! Then we're suddenly dropped into the title song, halfway through and constantly talked over.

The rest of the tracks are pretty ok. My favourite performance was from 'Little' Stevie Wonder, who this movie introduces, while my least favourite was Annette's, which was a bit echo-y, her singing wasn't that great,  and it kinda fizzles out.

The end credits of the film also annoyed me. Rather than just playing one song over the credits as they roll, we instead get lots of snippets from various different songs, and dialogue from earlier. It's a weird mishmash that never really pleases the ear. If only they'd just picked one and stuck with it! 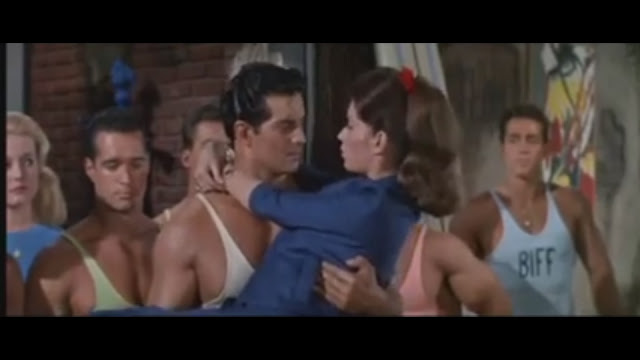 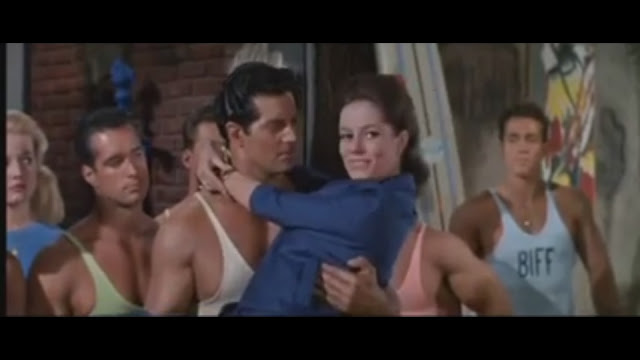 Muscle Beach Party is a flawed film, that never truly settles down to figure out what it wants. It's kinda like Frankie in that regard. If it had've just focused on one or two things it might've succeeded, but it tries to do so much that it fails at everything to an extent. This is never bad, and leagues better than Dr. Goldfoot, but it's not the best the series could be...
Posted by Chris Hewson at 9:46 PM