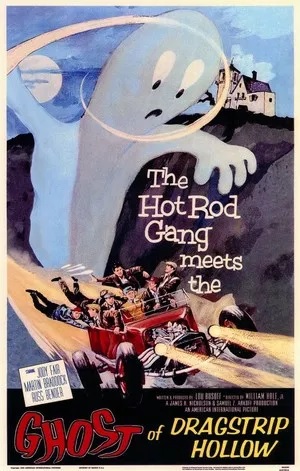 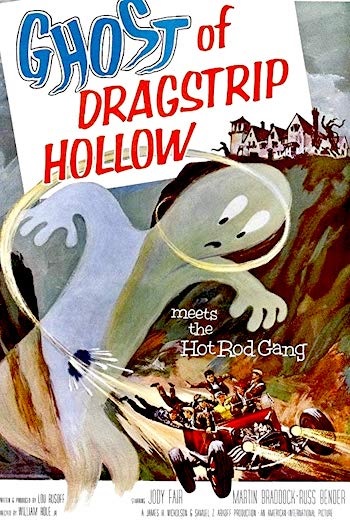 A group of motor enthusiast teens are having some trouble. Their club is being evicted from their HQ unless they can pay the rent. With the help of a journalist writing a story on them, they seek out any way they can to raise funds. Facing opposition from delinquents, and trying to stay out of trouble with parents and the police, they soon end up having to deal with a haunted house... 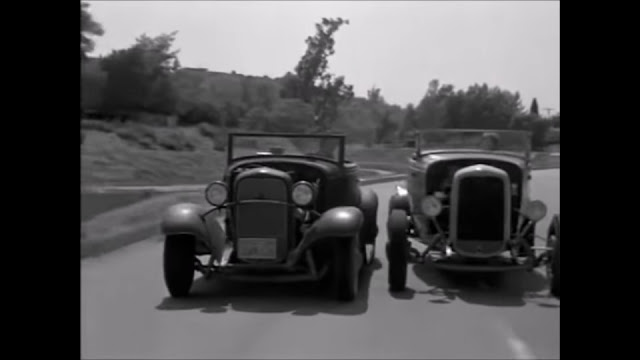 A precursor to the AIP Beach Party franchise, The Ghost of Dragstrip Hollow is a surprisingly good teen movie! I went in hoping for something fun, but wasn't sure how it'd pan out. Thankfully it ended up not only fulfilling expectations, but exceeding them! This was plenty of fun, with endearing characters and .

Ghost of Dragstrip Hollow is a sequel to 1958's Hot Rod Gang, but you'd never know it. I mean this in a good way. It's the kind of sequel where you can pop it in first with no prior knowledge and have no problem understanding it. The story might not be the most original, but it's told in a fresh and amusing way. It's a little goofy, but far more grounded than later teen movies of the like from the 60s. What I admired most of all is how the film portrays the teenagers and adults, and how they interact. The teenagers are sometimes immature, and have partygoing or racing priorities, but are never irresponsible. And then there are the authority figures, like the journalist who watches over the gang. He's not just some old fogey, and he has faith in them, even justifying their lifestyle to others. Not even Lois's parents are total buzzkills. Her father is a typical party pooper, but the mother is more levelheaded, and reins him in (like by reminding him he was just as [wild] with her as Stan is with Lois). Likewise, none of the teens are pissed about sharing a party with the adults. The film reaches a good middle ground. The kids are able to be down to earth, and the parents sometimes disapproving, but never unreasonably so. 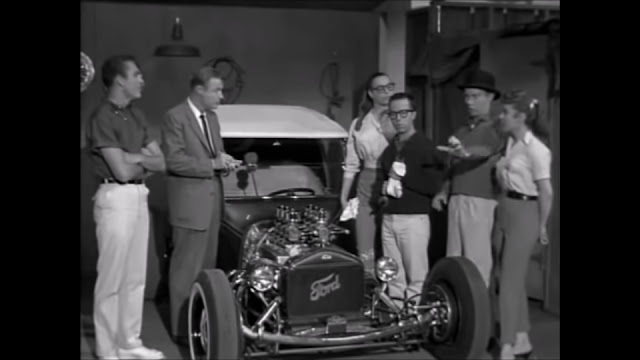 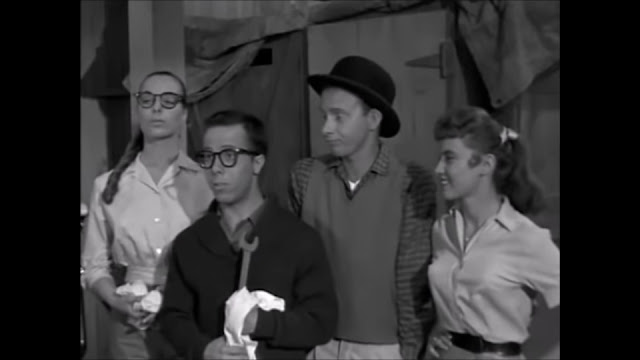 While my interest in cars is pretty negligible, Ghost of Dragstrip Hollow does a pretty good job of getting you invested. You really buy these characters love what they do, and you can't help but admire their smarts.These are good kids, that's for sure! The old timey motors they use are pretty neat too, looking like something out of Chitty Chitty Bang Bang!

While watching the Ghost of Dragstrip Hollow, you could be forgiven for forgetting there's a haunting. This is because it's not even mentioned until the last 20 minutes! This has some positives and minuses. On the plus side, it means the film isn't defined by the presence of a gimmicky haunted house, and has plenty of time to establish and tell the bulk of the story before that part of the film. Once the haunted house section starts, it never drags on for too long. It's also a neat setting for the finale that shakes things up a bit. However, getting to the negatives, the film was perfectly good on its own, and didn't need any shaking up. Everything was fine on its own, and I didn't even miss the presence of the ghosts the title promised me, but the story ends up being overtaken by this stuff, which comes out of nowhere, with zero prior foreshadowing. 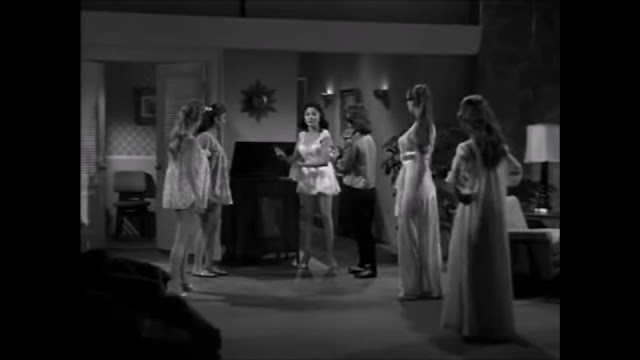 Disregarding what effects it has on the story, let's dig in to how this haunting stacks up. I found it to be pretty neat! Despite being a goofy teen flick Of course there's always a comedic air to things, but these could be genuinely atmospheric if in a film with a spooky tone. As for the monster, it's effective when you see it in shadows, but once it's in clear view, it becomes a lot less intimidating. On that note, the old 'monster was in the bed with you the whole time' trope can be a spooky trick, but when you actually see the monster get under the covers, it kinda lessens the impact, and makes it more silly than scary. I suppose it gets a pass here though, this this is a silly film.

Sadly there's no real major reason for the haunting to happen in-universe. I was expecting something big, like a criminal operation, but it's nothing like that. I did like how the teens react to the ghostly threat though. They have a really clever way of fighting. 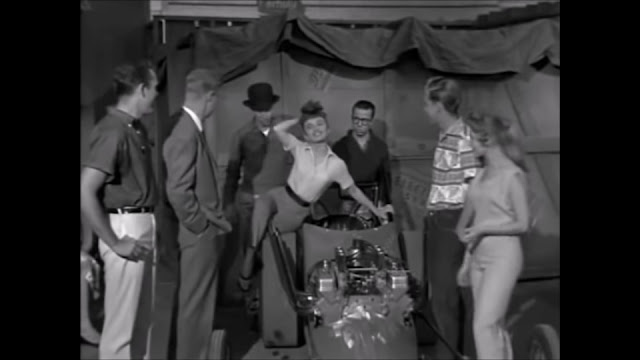 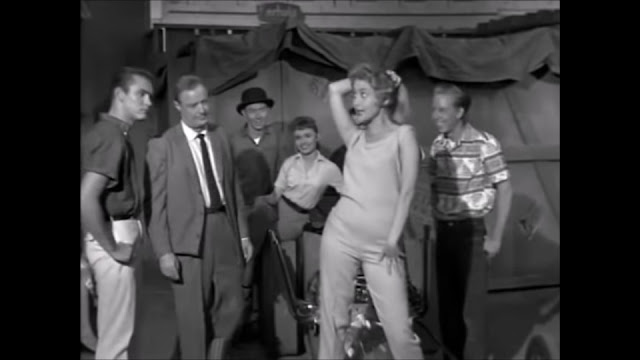 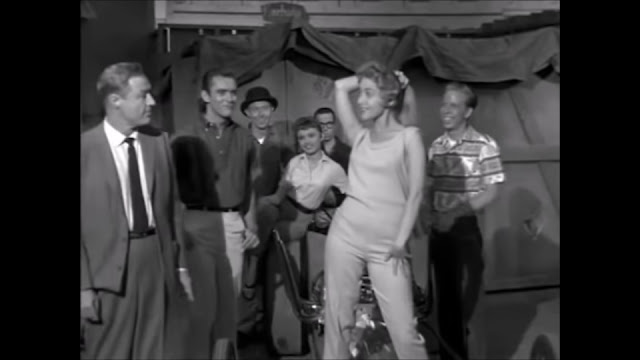 Now let's come to the biggest issue with this film! It has a pleasantly short length at only 65 minutes, and while this means it never drags, I genuinely wanted more! It's good enough that I wish it'd been another half hour! Then came the conclusion, and I really wished it had've been longer! Ghost of Dragstrip Hollow only had 5 minutes to wrap up everything, from the haunting, to the eviction, and all the character arcs. How it handles this I've gotta say is pretty unsatisfactory. The introduction of a living car is a bizarre inclusion, and the reveal of the 'ghost' would be an amusingly meta and referential nod to AIP's horror film's of yesteryear, but it's all over too quickly, then everyone's back to dancing. And that's how the film ends. No real resolution to anything, just one last gag, and the worst The End title card I've seen in a long time. 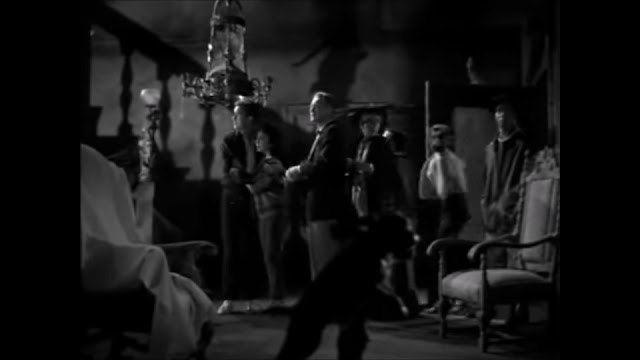 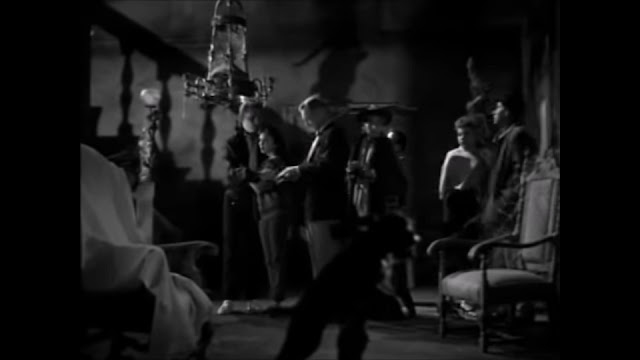 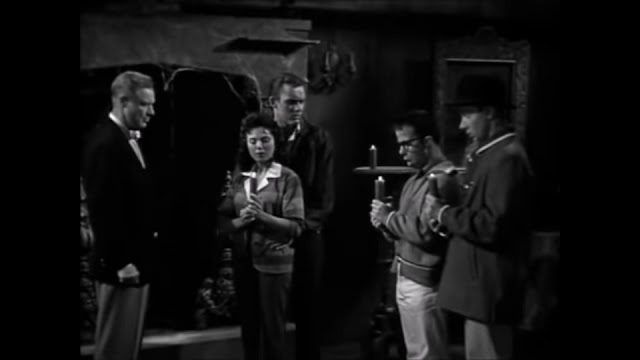 While some of them blend together, the characters here are all good. Lois is a mischievous protagonist, with enough flaws to make her interesting, and is never mean. Stan is the gang's defacto leader, and he's nice enough, though kinda fades into the background a bit, nowhere near as distinctive as the rest of the cast. Comedy relief goofball Bonzo is mercifully not annoying (though others might have less generous opinions), and Dave the nerd and his girlfriend Amelia are funny. It's nice that the movie wanted to have a traditionally nerdy pair as part of this hot rodding group, and for this to never be questioned or mocked. 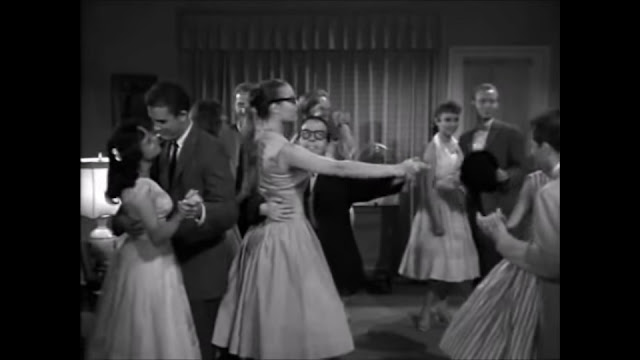 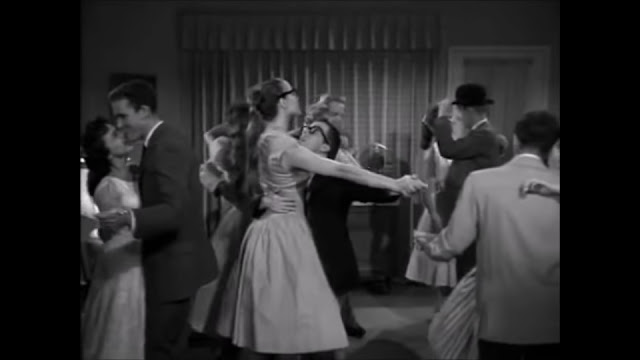 The adults all feel distinct. Older journalist Mr. Hendry is a good addition to the cast, providing an outside perspective, and a sympathetic ear. Lois's parents are fun, complementing each-other and their daughter well. Anastasia Abernathy is  along with her smartmouthed parrot Alfonso. There's also a goofy chef, who's alright, though doesn't get much to do after the halfway mark.

Then there's Tony and his gang. Former members of the Hot Rod Gang, they were kicked out due to flaunting  the rules and playing rough, and are now staunch rivals. They appear every now and then to cause trouble, but nowhere near enough, and by the end they were almost completely forgotten. I did wonder if they'd turn out to be the villains responsible for the haunting, but nope. They show up briefly for a reluctant dance, then the girl challenges Lois to another race. What happens next we never find out, because the race is offscreen, and we never hear who won! It's disappointing, especially since this plays such a big part in Lois's story, yet its never really resolved. 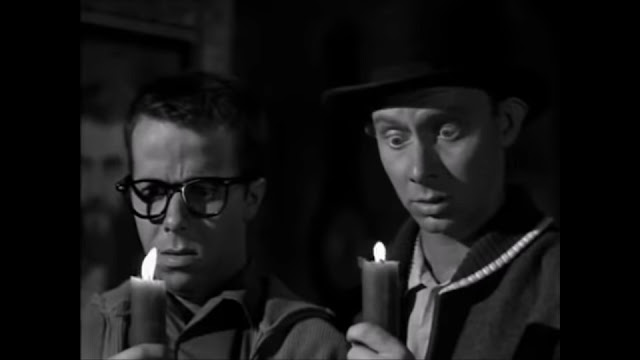 The comedy in Ghost of Dragstrip Hollow all lands well enough. The dialogue is totally crazy! It's, like, far out, man!

Ah, to be young in the 50s and 60s. What a special time! Thankfully as bizarre as it is, this slang is kept to a decent minimum. Enough to be fun and distinctive, and not so overdone that the characters feel like cardboard cutouts rather than real people.

"A bash? That sounds positively indecent!" 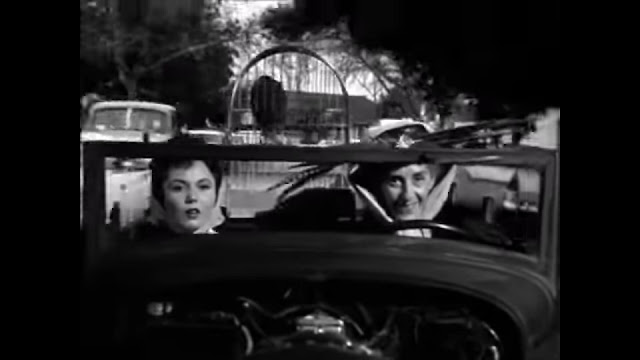 The acting here is all good! Jody Fair is a nice lead, getting across every facet of her character. Dorothy Neumann is a hoot as the dotty Anastasia Abernathy. Her parrot is either an incredibly talented bird, or a funny voice actor. Henry McCann is a bit clunky as the nerdy Dave at first, which may well have been intentional, but still felt weak. He does improve though before too long. Sanita Pelkey meanwhile is alluringly clinical as his likeminded girlfriend Amelia. Jack Ging also has a decent role as bad boy Tony, and I've gotta say it's fun seeing the usually stern authority figure being on the other end of the law for a change! The actresses here are all real beauties, and the guys get the job done too.

Since this is an AIP teen flick, you know there's gonna be a bunch of songs. Ghost of Dragstrip Hollow doesn't disappoint in that regard, although the songs themselves are just ok. I liked the first one, but the others feel very much like background material. Even the other full number Tongue Tied seems to end very quickly. There's never anything bad though. 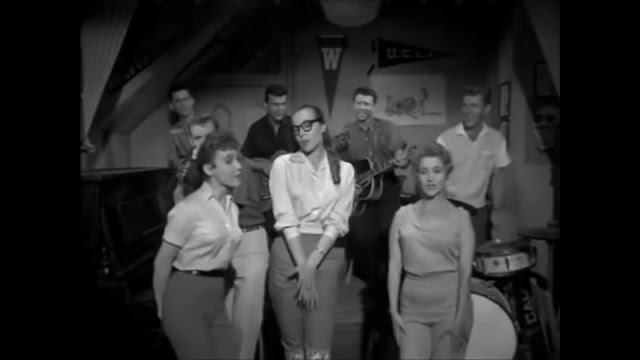 This is directed well, with the chase scenes (few of them as they are, being pretty good, especially with the against-type cars used). There's some groovy dancing as well, that really makes you wanna swing. Well, it does for me at least!

This isn't a hugely effects driven film, but what there is is good, from car scenes to hauntings. The only disappointment was the monster's costume. It's by no means bad, but it loses its mystique when seen in bright light. The actual costumes worn by all the partygoers look really good though! Some are just regular costumes, while others are recycled props from other horror flicks (like Invasion of the Saucer Men), and all of them are cool. 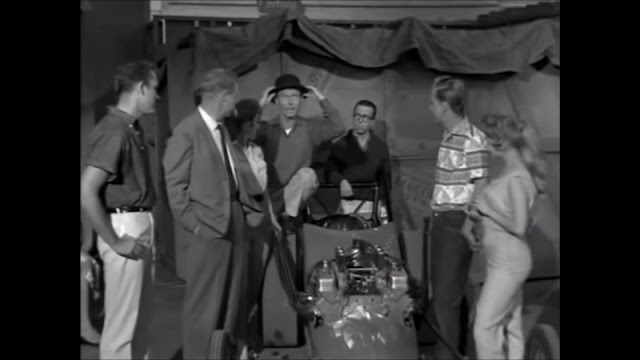 Its problems aside, Ghost of Dragstrip Hollow is a really fun movie, and I'm bummed out that it never got any further follow ups. The movie's legacy is nothing to laugh at since it led to the wildly successful Beach Party series, but it's a shame that we never got a proper series with the Hot Rod Gang. They deserved more entries/films.
Posted by Chris Hewson at 2:09 AM