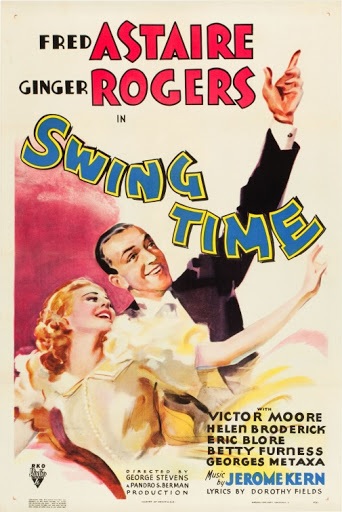 John 'Lucky' Garnett is all set to be married when his conniving friends trick him into being late. The wedding is called off, until Lucky convinces his prospective father-in-law that he can make $25,000 dollars as a 'proof of concept'. A determined Lucky sets off to New York with his friend Pop to make the money, but comes across the feisty dance instructor Penny Caroll. Despite a rocky beginning, the two hit it off, and soon find themselves performing together on = stages, but face off against various difficulties, from a jealous composer, to money shortages, and the looming spectre of Lucky's engagement... 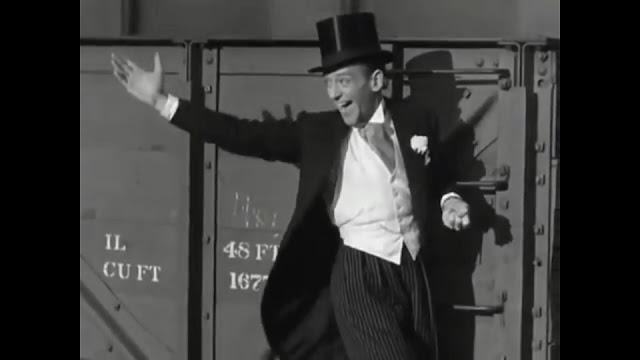 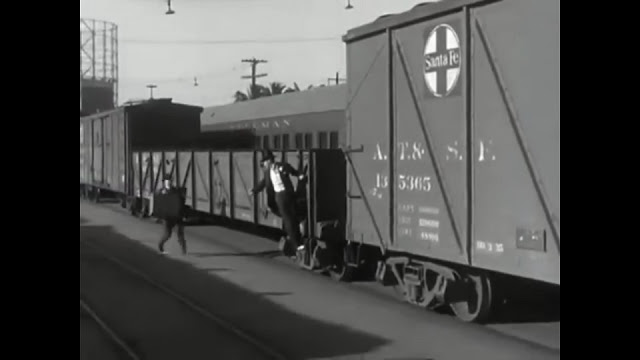 Swing Time is considered by many to be the crowning achievement by legendary song-and-dance pair Fred Astaire and Ginger Rogers, and it's easy to see why. It's funny, witty, a breezy watch despite its length, and is unsurpassed in the talent on display.


The story gets off to a nice start, introducing us to the lead and his dilemma in an effective enough way. It's a bit of a shame we never see Lucky's friends or = anymore, and I remember on my first viewing I  was expecting them and Margaret's family to play more of a role 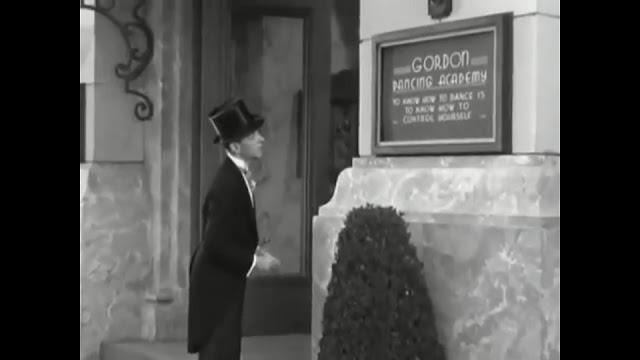 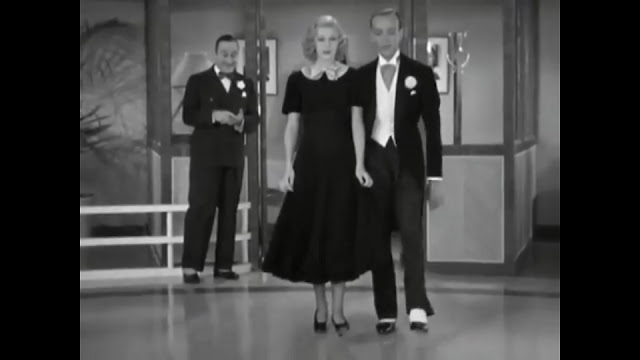 The characters in Swing Time are great. They   Lucky is a sunny lead, with plenty of talents, but also a few faults, making him a well-rounded character. The movie does a good job at showing him being conflicted.  He doesn't wanna be with his old girlfriend anymore, but he also doesn't want to make advances towards  while he's still under obligation to Margaret.

Penny is just the right mix of feisty but sweet. She starts the movie pissed off at Lucky, and wanting to turn his guts to garnetts, but this doesn't last too long, and the romance between them happens very naturally. She's a lovely girl, and it's nice seeing both sides of her. 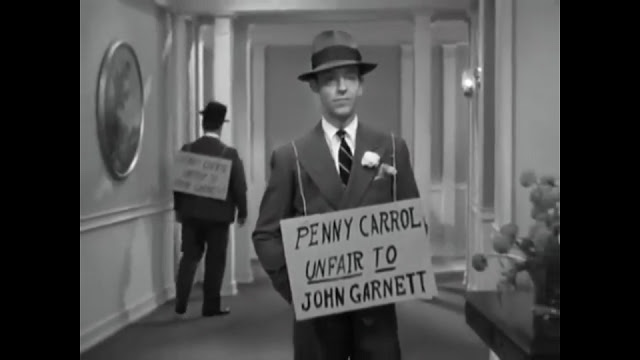 Lucky's friend Pop is a fun companion, always serving a purpose, and the same goes for Mabel, whose snark provides many amusing moments. The remainder of the cast is made up of scheming composers, gambling crooks, pissed off father-in-laws, and a slew of other entertaining folks (or maddening, depending on how much you wanna punch Ricardo Romero in the face). 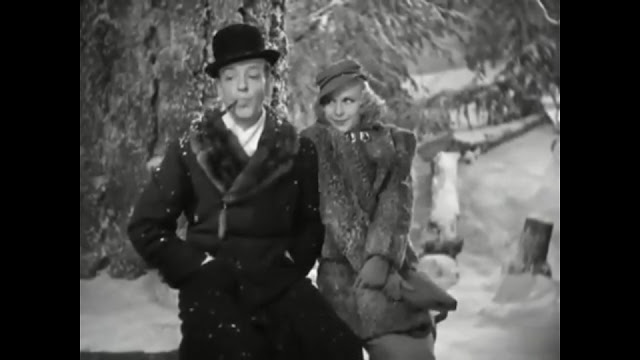 The actors here are all marvellous. Fred Astaire is a hugely likeable lead, and has  the best smile! Ginger Rogers is likewise great, and =. The two share great chemistry, and you really believe them as a couple. Victor Moore and Helen Broderick are great comic relief, and always have a great presence. They have sincere chemistry too. The remainder of the cast is all good, from Bela Lugosi lookalike Georges Metaxa, to Eric Blore and Betty Furness.

The dancing in Swing Time is simply stunning! The two hoofers do phenomenal jobs, and all the hard work they put into these routines clearly paid off. They carry them out so effortlessly and flawlessly, 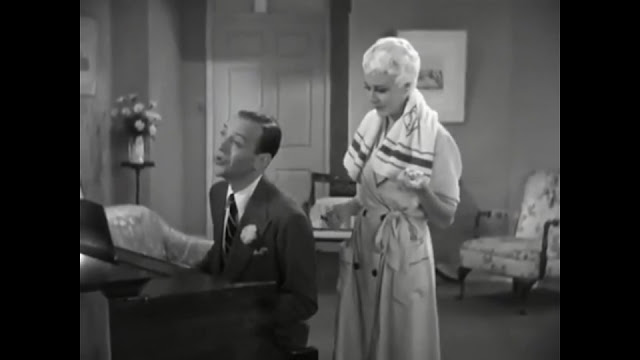 The music in Swing Time is also worthy of high praise. Containing tracks that have truly stood the test of time, from The Way You Look Tonight, to Bojangles of Harlem, and ultra catchy tunes like Pick Yourself Up, and A Fine Romance! They're also integrated well with the dancing, never overshadowed, and the = of the singing often complements the energetic dances greatly! Astaire has a =, while Ginger Rogers is very humourous in her parts. 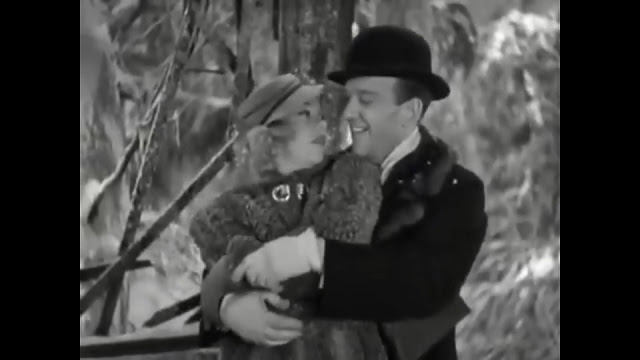 The visuals are another high point. Scenes are framed very well, from small hotel rooms to big practice spaces, and the wide open outdoors. The = in some scenes especially impressed me, really making the movie feel real, and almost artistic, like an art deco portrait come to life.

The only real criticism I have is that the movie is so long and there are so few numbers that they feel a little unevenly spaced. If only the film had been a bit shorter. At nearly two hours it is a fairly sizable film, and it doesn't necessarily need to be, however it's never boring or overlong, and the talent involved keep it entertaining for all that time. 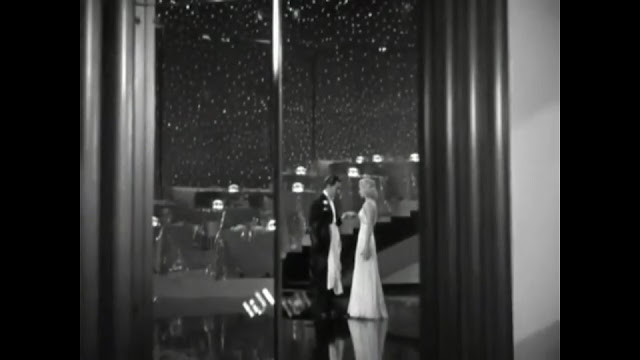 Swing Time is an absolutely fabulous movie! It's one of the greats from the 1930s, and

As for whether there should've even been a romance to begin with, I'm not sure. On one hand, Lucky starts the movie about to get married to another woman, so I think it'd actually be neat if he did still get married to her (after all, they got together for a reason, surely?), and Lucky and Penny would simply be friends. How often do we see men and women just being friends in movies? Not too often!
wish there were more scenes, in a good way,   friends  romance

Something eyebrow raising however, is of course the blackface! Yes, Fred Astaire donned blackface at one point, and in the most popular of his movies, too! However, this is actually not as bad as it sounds. The whole number/act is a tribute to actor/tapdancer extraordinaire Bill Robertson, who Astaire greatly admired, and wished to pay respect to. As for the make-up itself, Astaire just has brown make-up on, rather than shoe polish and bright red lips. There are articles on the internet by African-Americans who have their own reasons for justifying the scene, beyond the ones I've already listed. So basically, the sequence is...rather dated, to put it lightly, but not racist. Not at all, not when the intent was so =, and the people in question are fine with it. Black people aren't stupid after all, they know the difference between Al Jolson and Fred Astaire, compared to the offensive minstrels of the turn of the century.
Posted by Chris Hewson at 11:59 PM