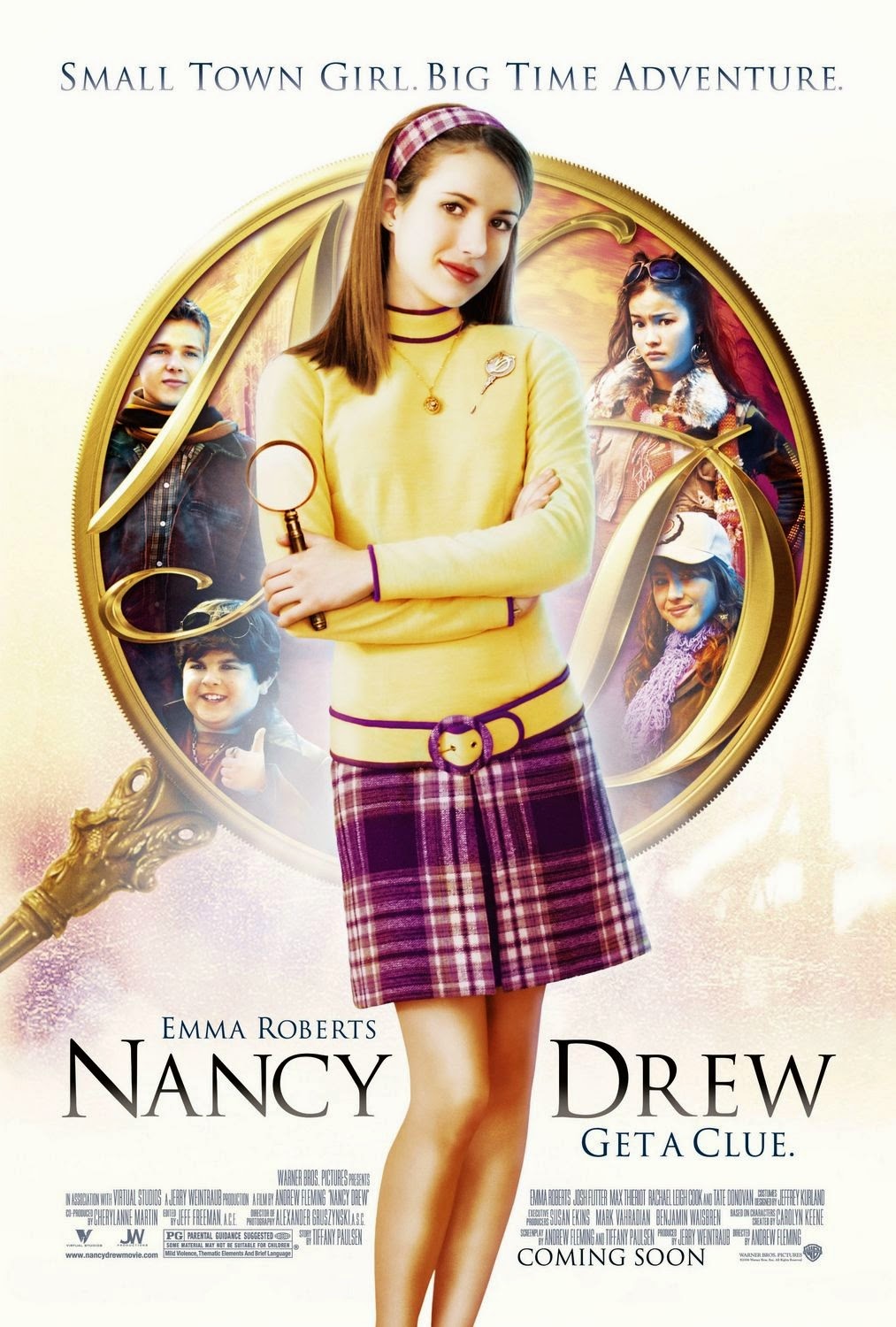 I've never read a single Nancy Drew book and I don't know if I ever will. Can you blame me? There are probably thousands of them at this point! But then again, I'd jump at reading Nancy Drew rather than again have to suffer through the goddamn 'aw shucks' tales of the fucking Hardy Boys!...I DON'T LIKE THE HARDY BOYS!

Onto more positive and less foul-mouthed subjects, in 2007, a Nancy Drew film was released, and since it lacks the baggage of thousands of prior books, and dozens of possibly conflicting details and continuity mishaps, I decided to give it a watch, and I didn't regret it!...

Nancy Drew is a bright teenage girl always smiling, always friendly, and always sleuthing. An avid mystery solver, Nancy always keeps herself busy, but when she and her father move to Los Angeles for a planned few month long stay, he insists that she keep away from anything mystery related. Nancy promises, but this proves easier said than done, considering she specifically chose their new house due to its background. It was owned by Dehlia Draycott, a famous actress who disappeared for some months only to come back briefly before being murdered. Many people have tried to get to the bottom of this mystery, but not everybody is Nancy Drew...

Nancy Drew is a very good film! The plot is well-written, has a good pace, and contains an interesting mystery! While it's kind-of a shame that Nancy never finds out the identity of the culprit on her own (he just eventually shows himself to her), it's still one of the film's best aspects.

From her adorable looks, laidback nature, killer fashion sense, jovially blase attitude, and investigative knack, Nancy Drew is an extremely likeable protagonist! One aspect about her character I particularly like is that she does actually make an effort at first to keep her promise with her father, and comes across as a more likeable character because of this than the oft-written ones which'd just immediately ignore the promise and instantly zap to sleuthing. Nancy's also a badass! You know what happens when a schoolgirl victimizes her? She slices the girl's throat open! HAHAHAHAHAHAHA!...ok, the girl's having an allergic reaction and Nancy performs an emergency tracheotomy, but still, badass...

Nancy's friend and sorta love interest (only really at the very end) Ned is kinda superfluous, but he's not annoying or anything. The two school divas are total bitches, but in an amusing way, and they do become kinda genuinely likeable come the movie's end.

And now we get to Corky, the film's most annoying character! He's not terrible, but he is pretty grating, and he adds nothing to the plot. I guess the writers must have figured that out, since he's entirely absent from the movie's final act, just showing up again for the climax's end, and the denouement. Thank you, movie!

The acting in Nancy Drew ranges from good to great. The latter definitely covers Emma Roberts, who's charming and adorable as the titular character. Barry Bostwick at first seems to only be playing a very small role, but he comes back in the last third to be more important, and he's great! And then there's a funny cameo from a...certain actor. I won't say who.

And finally, this film has very good direction! It's niftily stylish in a few places!

To finish, Nancy Drew is a highly entertaining movie, both sweet and adorable, and neatly intriguing! I recommend it to fans of mysteries of this kind!...
Posted by Chris Hewson at 9:03 AM