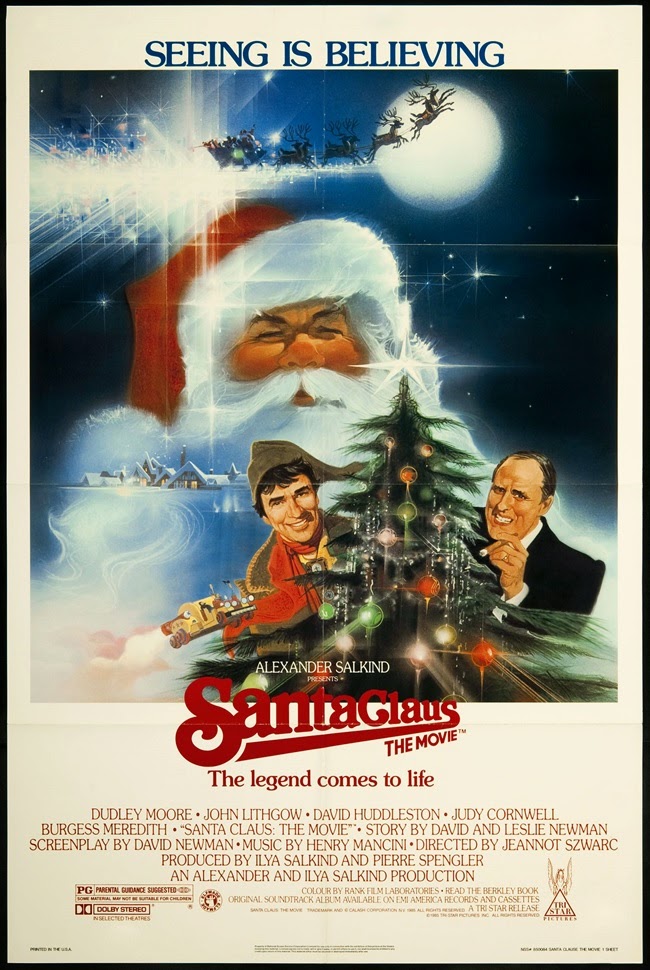 Santa Claus is truly one of the enduring figures of Christmas, despite debilitating setbacks such as his weight, or getting beaten up by Patrick Swayze after attempted theft. He's a jolly old bearer of gifts who even gets plenty of great movies based on him!...And about three times more bad ones, but don't tell him that in your letters, otherwise he may start emulating that Weird Al Yankovic song!...

Long ago, in the cold ends of the Earth, a man named Claus takes great pleasure in giving personally handmade presents to all the children he can reach. One night, he and his wife are nearly killed in a snowstorm after a delivery, and are saved by a group of Elves. The mystical people were expecting Claus, and have prepared a vast toy workshop, from where he can produce toys for every child in the world. Christening him Santa Claus, and giving him immortality and a variety of magical abilities, the elves are ecstatic, and Claus is ready to take on his newfound expanded duty.

In the present day, Santa makes friends with two kids-The homeless Joe, and the orphan Cornelia. They're both entranced by the jolly red man, but after his chief assistant Patch ruins Christmas, they're among the only ones still supportive of Santa Claus...

Santa Claus is a very nice Christmas movie, with many great aspects! This film does something surprising by actually giving Santa a character! I'm sure that other movies have done this (Ernest Saves Christmas, and the Miracle on 34th Street films come to mind), but in most media, he's more of a template (a good one, mind you) than he is a well-rounded character. The mythology behind Santa presented here is very well-done too! This movie takes Christmas seriously, with more than enough joy in its telling!

The story here is decent, and great concerning Santa, but unfortunately it focuses too much on the wrong character (I'll elaborate below), and doesn't spend enough time with its two child supporting leads. They get just enough scenes, but still too few by far! What's worse is that they're quite well-written characters, and their friendship is quite a nice one, but it's not given enough attention. My final problem with Santa Claus' plot is that its ending is really abrupt and rushed, while the final stinger is an oddly dark way to end the movie, which had just seemed to finish on a very happy note.

Now onto my biggest issue with Santa Clause-Patch! I don't care if he's played by Dudley Moore-Patch is an unlikeable sack of crap! His constant pathetic mistakes are the catalyst for all the movie's problems! He's a smug and petulant asshole who never, ever stops making terrible elf puns, and makes many a scene extremely uncomfortable in an otherwise charming movie! He ruins Christmas for a YEAR! He causes Santa to fall into deep depression!

The acting in Santa Claus is middling. Dudley Moore is dull when he's not annoying, while John Lithgow plays his role as the film's villain incredibly over-the-top, to a highly entertaining degree! Carrie Kei Heim is cute, and a largely decent actress. Her delivery is a tad weak at times, but nothing too serious. Christian Fitzpatrick isn't quite as good, but still decent. And finally, we get to David Huddleston, in what is quite possibly the best performance of his entire career! The man gets across so many emotions so fantastically, whether sadness or joy, and his Santa is undoubtedly one of my all-time favourites!

The score to Santa Claus is quite good, with the best song being Thank You, Santa, but unfortunately it's only played for about half-a-minute, then never heard again. What's worse is that the song played over the end credits is sssssssssooooooooooooooooooooooooooo REPETITIVE! It never stops playing the chorus! It's sung like fifty times! LITERALLY! There's a special place in hell for songs so bad they make me want Sheena Easton to shut up!

The effects in this movie are decent. The green screen shots when Santa's flying his sleigh are rather well-done, while the reindeer are cute! Obviously not real animals, but good nonetheless. As for the look of Santa's workshop, and the costume design for the elves, it's all incredibly colourful and vast!

Santa Claus is a great Christmas movie! It has quite a few problems, but it's still a fine thing to watch in this season of joy!...
Posted by Chris Hewson at 11:07 PM