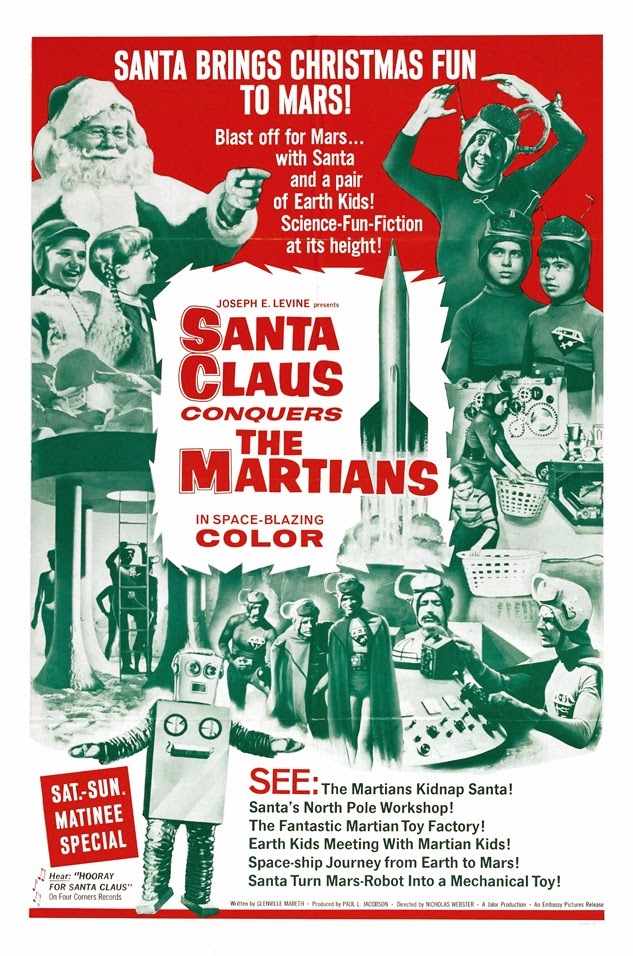 Even before its inclusion on riffing show Mystery Science Theatre 3000, Santa Clause Conquers the Martians has always notorious for being one of the worst films ever made, right up there with Plan 9 from Outer Space! Like Plan 9, this movie has a cult following thanks to how 'so bad its good' people see it as, rather than being just irredeemably dreadful... 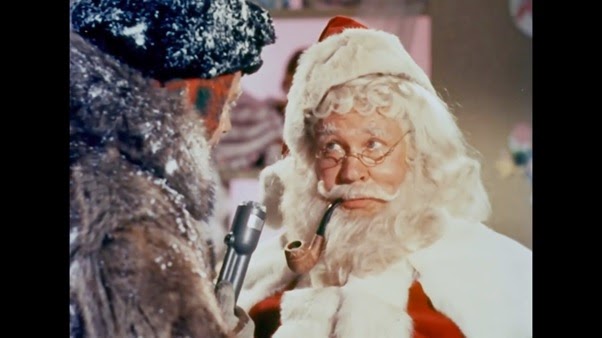 Children all over the planet Mars are feeling depressed, not caring to eat, and heavily drawn to Earth TV programs. The planet's leader Ki-Mar sets to find out what's causing this mood shift, and soon realizes that Mars needs a Santa Claus. He goes to Earth with some compatriots and kidnaps Santa, along with two kids, Billy and Betty, who he had divulge Santa's location. They head back to Mars, where Santa makes a positive impression on everyone but the aggressive Voldar, who seeks to destroy Santa Claus before he can 'sap the warrior spirit' from the Martian youth...

As far as I think, Santa Claus Conquers the Martians isn't really much of a bad film in the slightest! Sure, it doesn't look great, but it has such an air of fun to it that there's no way I could consider putting it on any worst lists!...Well, minus the effects, but that goes without saying. My point is that I have seen a LOT of really BAD movies, and lemme tell you, Santa Claus Conquers the Martians is no Feeders 2! 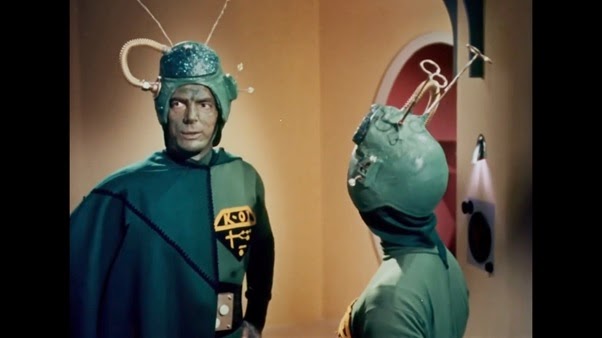 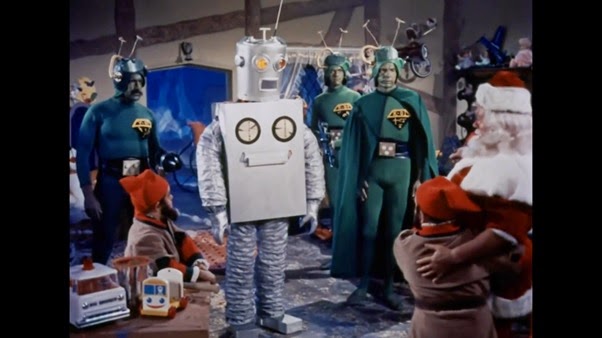 While the plot to this movie is entertaining in a fun and kitsch, it is very is dumb, and has quite a a few plot contrivances, such as Santa and the kids escaping a soon-to-be-decompressing airlock by going through an air vent!...In an airlock!  And then there's the climax, where Voldar, the armed 'proud warrior Martian', is easily defeated by glitter guns, bubbles, and flimsy remote control airplanes! One scene in particular many find weird and disturbing-The laughing scene!

The dialogue is pretty standard, albeit clumsy in places, and there are a couple of mildly amusing moments, like Santa's line about chocolate ice cream and headaches. Then we get to the hilariously lazily named main Martian family-Mo-Mar, Bo-Mar, Gir-Mar, and the more subtly named Ki-Mar (as in King, I assume). 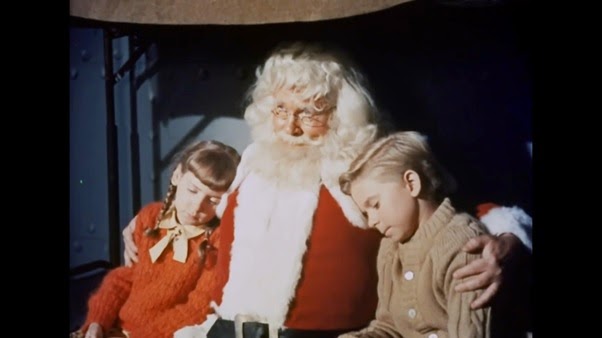 The acting in this movie is largely decent. John Call makes for a very good Santa, looking perfect in the role and acting suitably jolly, while the film's child actors are not as good, especially the two Martian kids (one of which is the infamous Pia Zadora, star of notorious film The Lovely Lady, and subject to the Anne Frank stage production "She's in the attic!" myth regarding the supposed quality of her acting). The actor who plays Voldar technically isn't all that good, but he exudes a villainous charm with his delivery that makes quite entertaining. The character of Dropo is bound to be annoying to some, but is mildly tolerable to others, such as me.

The effects in Santa Claus Conquers the Martians are unequivocally terrible, in a charming way, from the coffee-can headed robot Torg, to the propane-lighter spaceships, the incredibly fake sets, and a polar bear costume faker than the cat in Miranda July's The Future! 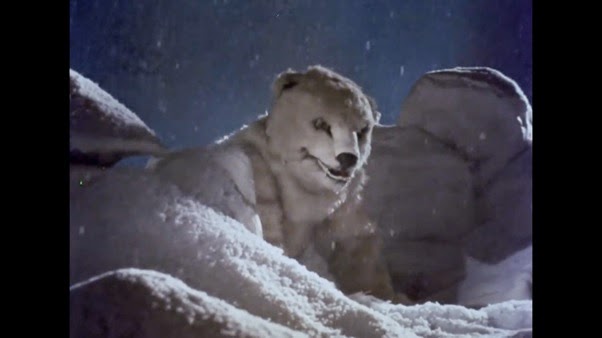 There are a few moments of archive footage in the movie's first third, which are pretty unnecessary, but not superfluous, as it is at least showing something of significance. It's just something of significance that isn't really required. Thankfully the quality of its film stock does mesh with the proper film's if you're watching the HD version, though not so much when you're viewing the crummy print Public Domain version.

This movie's score is ok, if eclectic, and the main theme, Hooray for Santy Claus, is listenable, in a fun camp kinda way. 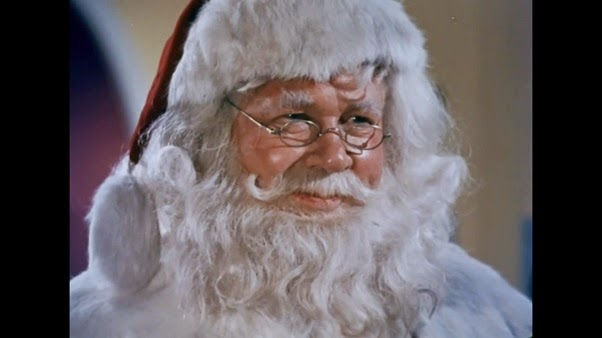 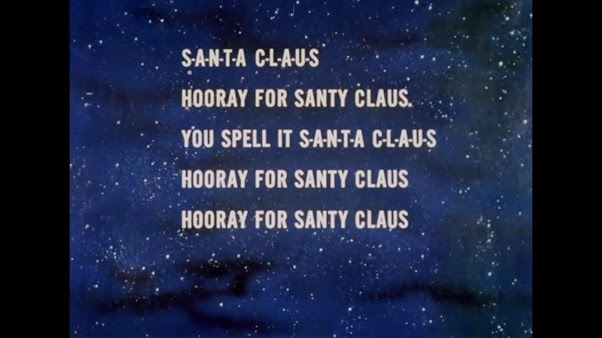 Overall, Santa Claus Conquers the Martians is a dumb film, but it's immensely enjoyable, whether you're watching the hysterically funny MST3K version or not. I recommend it if you're looking for something light and fluffy to watch for the Christmas season...
Posted by Chris Hewson at 7:18 AM