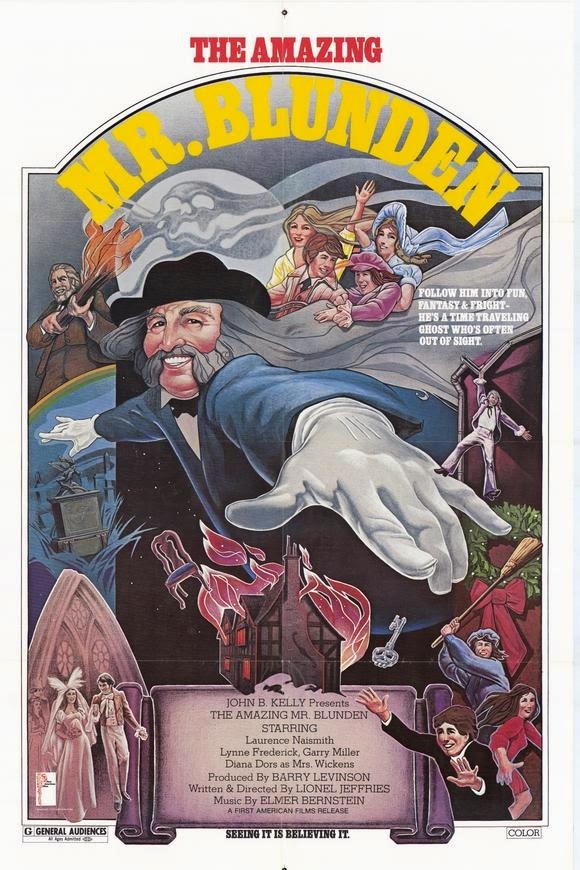 Geez, am I glad that I decided to go to the local markets today! I was originally not going to go, but when I woke up, I was too tired to object to being dragged down, and I'm the better for it, as if I'd stayed in bed, I wouldn't have found out about the fantastic The Amazing Mr. Blunden!...

Kids horror films are usually a pretty sorry affair. Even if the movies or TV shows in question aren't bad, they're not often particularly frightening, as they're always holding back in-case they 'scare the kiddies too much'. Screw that! Scare the little brats as much as possible! Scare them until their skin violently flies off their body! 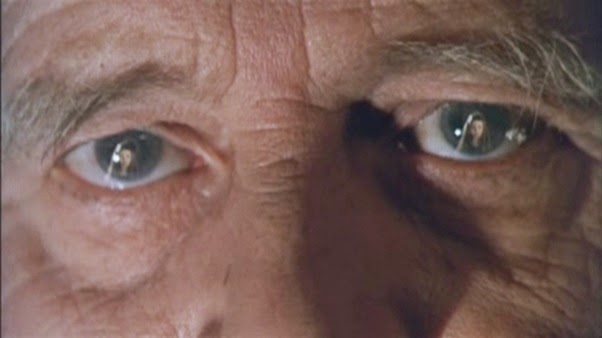 1972's The Amazing Mr. Blunden isn't strictly a horror film, but it shares many qualities, despite what the fun-happy title would leave you to believe. It led me to assume this was a joy-ridden comedy!...

One night, a mysterious lawyer named Mr. Blunden visits Mrs. Allen, a widower. He tells her about a caretaking job at a lavish but in disrepair mansion out in the countryside. As Mrs. Allen is poor, in debt, and has three children to support, so she jumps at the job...although when she visits the law firm the next day, they're most surprised to know that Mr. Blunden of all people was in any way capable of doing anything...

Mrs. Allen's two grownup kids Lucy and Jamie first hear about the estate's supposed ghosts from the cryptic Mr. Blunden, and they soon come across them-Sara and Georgie. The two spirits tell their story about about their cruel housekeeper and semi-guardian plotted to murder them, for their money. Sara and Georgie may not actually be dead after all, as they've been traveling to the present using a potion, which they instruct Lucy and Jamie to brew and drink, so they can help prevent the terrible things about to happen. Lucy and Jamie soon realize how desperately the need to when they find a gravestone with Sara and Georgie's names on it... 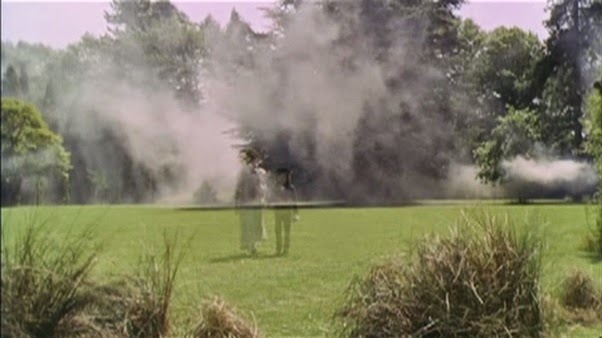 The Amazing Mr. Blunden is a very mature kids film! It always takes itself seriously, and the story it tells is a very smart. It's very well written, with elements of ghosts, mental time travel, predeterminism, and of trying to correct dire mistakes of the past, all going together perfectly! This is a pretty dark film, and certainly moreso than usual kids movie fare, and it doesn't shy away from grim themes, even if the ending is a happy one. So many filmmakers assume kids are stupid, and need simple watered down scary-lite movies, but stuff like The Watcher in the Woods and this (among hopefully others) prove that it's certainly possible to make intelligent and scary movies for kids. 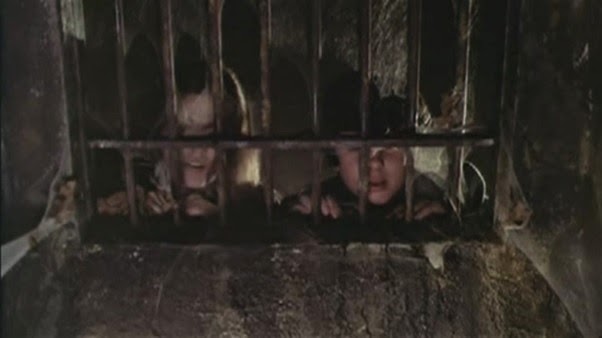 When it comes to this movie's genre, I have no idea what to class it as. It's not an adventure, nor mystery, or horror. It's a bit of a hodgepodge of genres.

My only problem with this move is the title! At first I was annoyed by Laurence Naismith's lack of screentime, but as the movie went on, I realized he had an effective amount. What mainly bugged me about his lack of presence at first was that he's in the title, but he is important enough to the plot that I could let that slide...if not for the use of the word 'amazing', which makes this sound like a fun panto romp with him in charge. Also, The Amazing Mr. Blunden? That title is a bit too chipper for the subject matter. 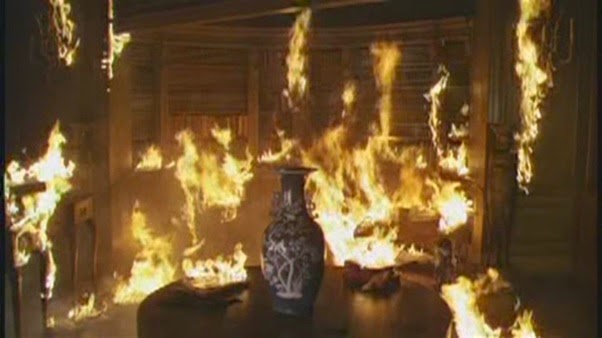 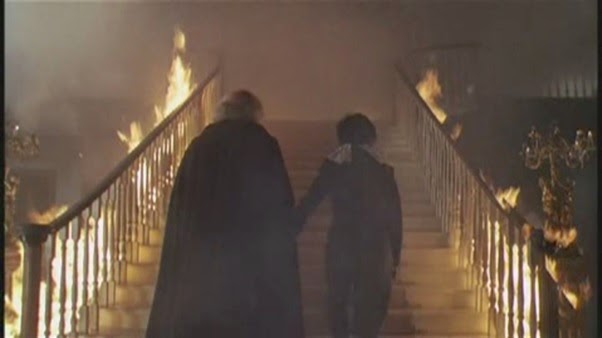 The ending is very good! Rather than just wrap up in under a New York minute, it's actually given due time to properly wrap everything up! There is what could potentially be seen as a bit of a contrivance at the very end given the lineage that comes up, but could potentially just be a little white lie-A sneaky provision by Sara.

Speaking of the ending, the credits are pretty unique and interesting! Think the end of a stage play!

The Amazing Mr. Blunden's characters are nicely written. Lucy and Jamie make for very good leads, as does Sara. Georgie does less, though, as he's a much younger kid. The film's villain is decent. More on her down below. 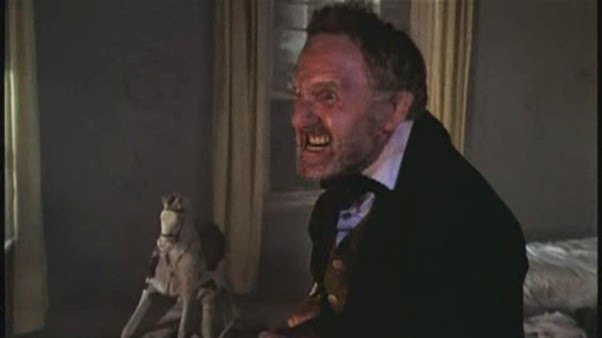 The villain's husband seems like just a nothing character at first, as given he's either mentally disabled, or brain damaged, he doesn't have a personality on display, but come the end, it makes him a pretty effective villain. He's a tough brute who can't be reasoned with, or easily stopped.

And finally, onto the film's best character, Mr. Blunden himself. He's a tragic and memorable figure, and his efforts to right his wrongs from the past make for a compelling story. 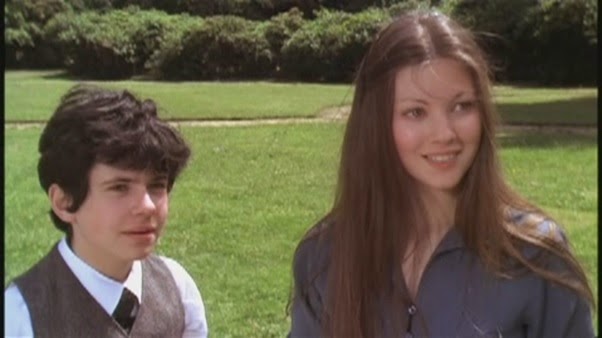 The acting here is largely very good, and there are no bad performances, which is very impressive, given the amount of child actors present. Diana Dors is over-the-top as the villain, but still good, depending on your point-of-view. Meanwhile, Laurence Naismith gives a fantastic performance, making the most of his rather brief screentime.

The scoring is good, but is either absent, or too low-key, in more than a few scenes, so while there are a few memorable tracks, quite a few leave little impression. 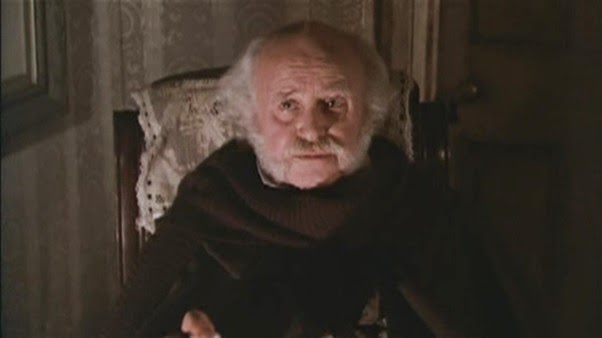 The Amazing Mr. Blunden is one of my new favourite movies, and I wholeheartedly recommend it, especially for Halloween!...
Posted by Chris Hewson at 7:18 AM