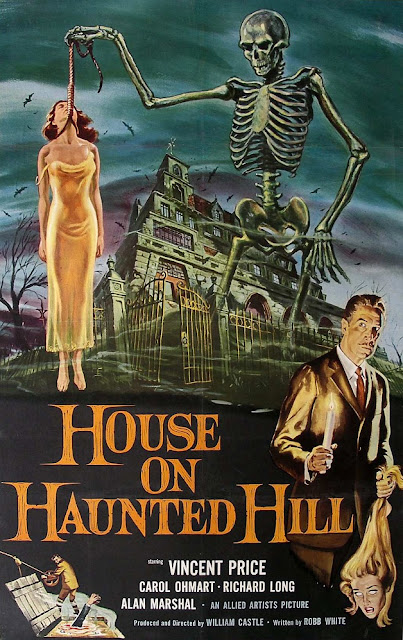 On a dark and stormy night, a group is gathering together in the 'house on haunted hill'. Millionaire Frederick Loren is hosting a party to see who can stay in this house until dawn, with those who make it winning $10,000 dollars prize money. The house has a notorious history of mayhem and murder, and this becomes clear very quickly as the guests find themselves being haunted, especially sweet Nora. Meanwhile, Frederick's scheming wife Annabelle has a plan of her own. Who knows which guests will make it through the night... 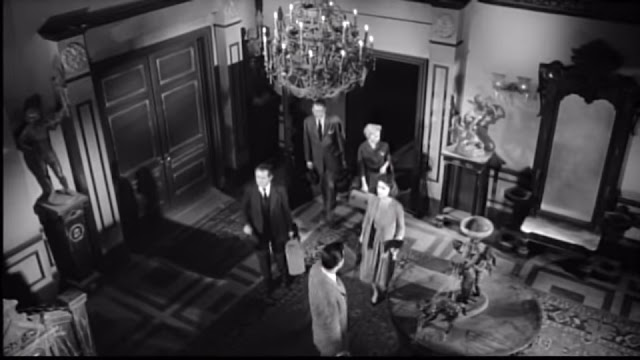 House on Haunted Hill is truly one of the quintessential horror experiences, and with = William Castle behind the camera, he really made it something special. During the film's original run, the theatres were full of flying skeletons, =, and all manner of ghoulish delights. He [delighted] in messing with his audiences in creative ways, and House on Haunted Hill was one of the most famous. Thankfully while having a real skeleton on a string sailing towards you in a packed auditorium might have a = that just watching the film on your TV at home can't capture, this is still more than = of a viewing experience. 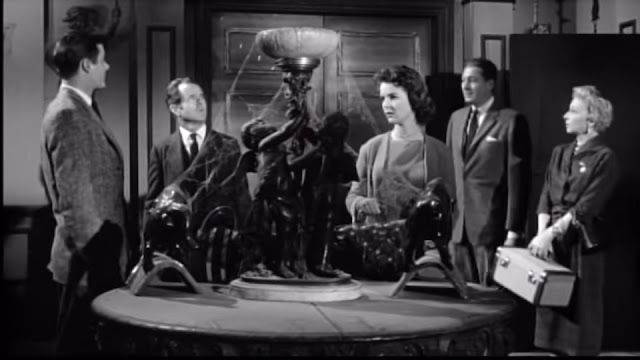 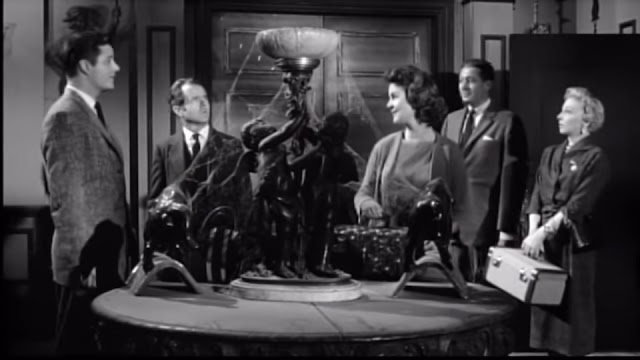 The story here is an iconic one, simple but effective to the ultimate degree. The characters and the situation they're in is set up immediately, with no long preamble necessary. From the get-go there's a sense of eeriness, and the movie builds up the macabre as it goes on. Whether or not it all holds up by today's standards is perhaps up for debate, but I think it still works, not only because it's all so classical, but also because anyone can show loads of gore, but ghostly chills like this pique the imagination a lot more!

The film is not perfect, however, as there's a pretty big problem I had. That's the laser-focus the film gives Nora. She gets the lion's share of the =, from seeing rotting severed heads, to hanged bodies, ghostly visions, etc. The most the others get is either a whack on the head, a couple drops of blood from the ceiling, or for the most part nothing! While this does make sense later on, it's still annoying! The majority of the guests end up feeling a little like non-entities, as we don't see enough of them, or how they react to what's going on around them. 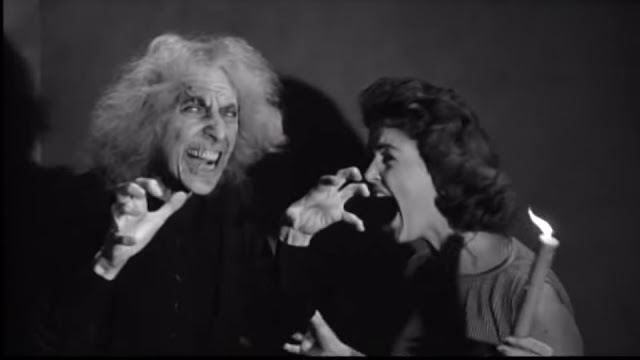 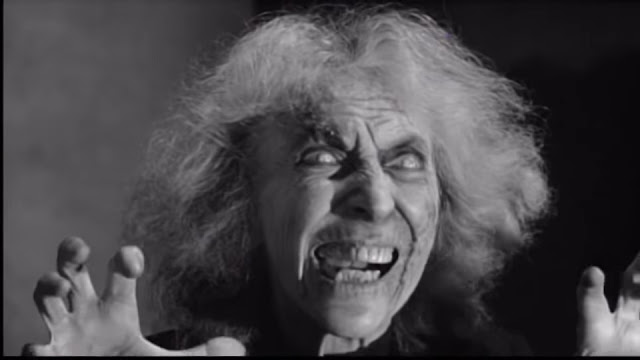 Come the ending, everything comes together, and there's a great twist, although this ends up being followed by a double fake-out]]]. This might be brilliant or infuriating = and will leave you scratching your head going "Wait, so are there ghosts or aren't there?". As for my opinion, it might've been better without this =.

Then there's the ending. Out of context, it's a great way to cap off the film, [with Elisha Cook Jr. warning the audience desperately that the ghosts =]. What bothers me about it though is that it doesn't make much sense in context, given where the story goes.

The characters   Frederick Loren   while his wife Annabelle is not only =, but manipulative too. It's = seeing how she acts the innocent defenseless lamb one scene, then is a lioness in another. You don't doubt she wants her husband/hubbie dead! 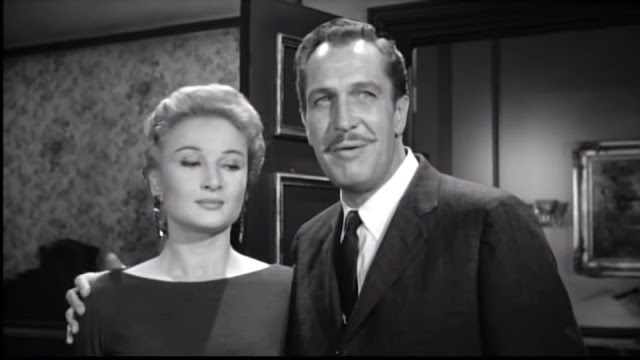 Out of all the guests, only Nora and Lance get any real focus, and even then, Lance's only role is to be the love interest, and a skeptic. He's ok, while Nora is a nice enough lead. Neither get much resolution in the end though, not even on the romance front.

Older woman Ruth Bridgers doesn't do much at all, not does she even react all that much to blood dripping from the ceiling! Dr. Trent is alright, but pretty bland, not even being that interesting even in the end. Pritchard meanwhile is the oft-= voice of doom, constantly reminding everyone that the house is full of violent spirits that'll claim their souls before the night is through, and regaling them with stories of how the previous tenants met with horrible demises. One wonders why he accepted the invitation in the first place! It's a shame the film never explores this, as it could have been quite interesting.

There are also the two servants, who sadly don't appear nearly as much as they should. They look distinctive (psychotic and monstrous/ghoulish in one scene!), and lend a nice air to the proceedings. They're gone once everyone's locked in for the night though. 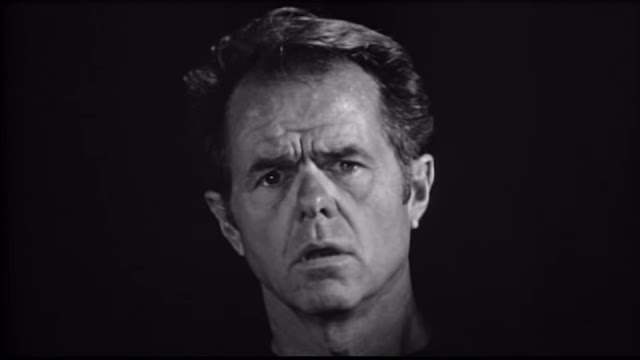 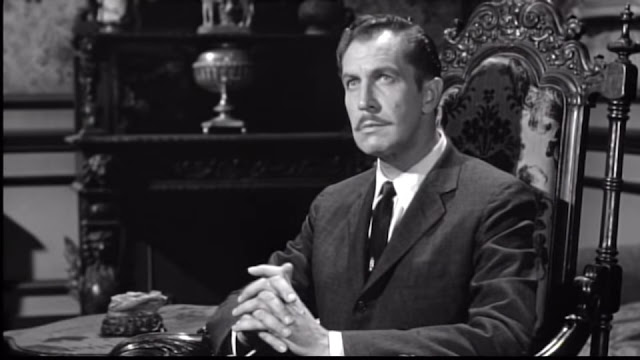 The acting is all good here. Carolyn Craig is good as Nora. Not only is she good at acting scared, but she also does a great job at being exasperated/frustrated   and furious. She's never one-note. Richard Long is ok as Lance, though nothing special. Same for Alan Marshal as Dr. Trent. Hulie Mitchum is funny as Ruth, though gets less and less to do as the film goes on.

Elisha Cook Jr. does a great job as the mansion's terrified owner Pritchard, helping the film's atmosphere out a lot. Leona Anderson and Howard Hoffman are convincingly unsettling in their small roles as the servants. Carole Ohmart is neat as Annabelle, getting across a few different facets. And lastly, Vincent Price is naturally the most skilled performer, and he makes the pretty nasty Frederick Loren very likeable! He's so charming, funny, and devilish, with great chemistry with his equally devious wife. 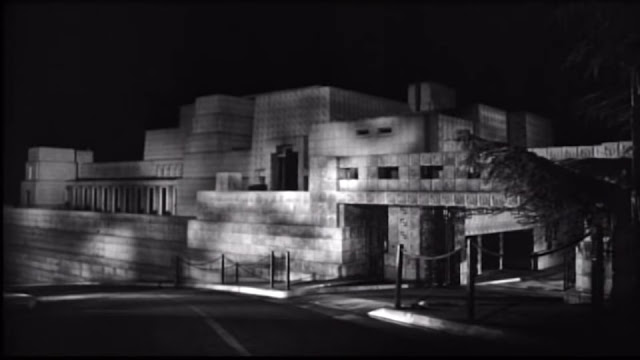 The music here is nice and ooky throughout. The sound design is very good too, lending much to the film's atmosphere, with the eeriest moment being the closing doors in the climax.

The effects are sometimes not the most convincing, but even then they're fun, and the more convincing stuff is cool! The skeleton at the end looks kinda like it's dancing, more funny than scary, but this in intentional, so it's hard not to laugh with the movie rather than at it.

The design of the mansion's exterior is interesting, too! The outside looks nothing like you'd expect. Rather than be a typical haunted mansion, it looks more like a big clinic. A spooky art-deco clinic, of course. It always looks off-putting despite its Against type appearance, and never makes one/you think "What is this, Health Resort of the Damned?" 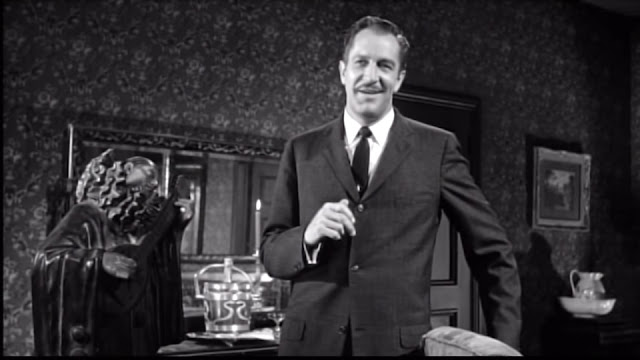 Overall, House on Haunted Hill isn't perfect, and is downright frustrating in places, but it still oozes such a charm, and is impossible to overlook!...
Posted by Chris Hewson at 5:53 AM