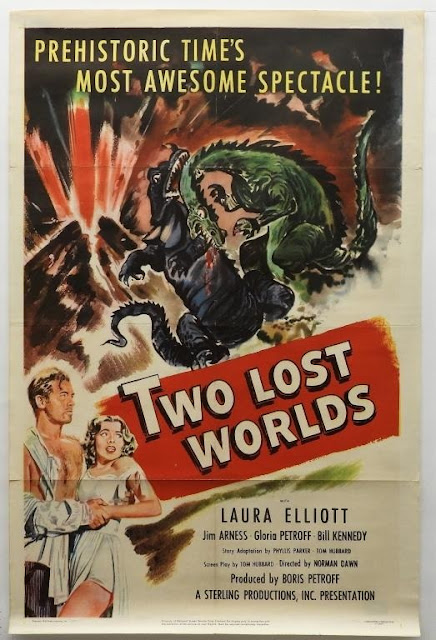 Strapping young American sailor Kirk Hamilton is bravely leading the charge of his father's shipping company, and defends it from the onslaught of pirates. In   he's badly wounded, and has to recuperate in Queensland while his ship goes off without him. While there he gets to know the pretty Elaine, and her family. Things are going well, but the townsfolk are worried Kirk's precense could incesnse the pirates to attack once more. This fear is eventually proven right/correct when the cruel brigands of The Phantom invade, kidnapping Elaine and others. A party is sent after them, and while the rescue is successful, they're sent careening towards a mysterious island, where unknown horrors await... 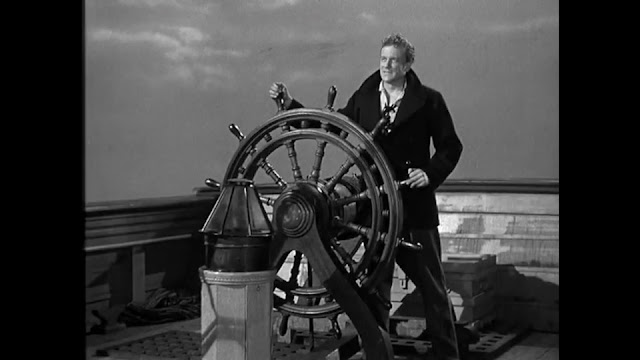 Two Lost Worlds is a very strange and rather unique movie. It starts out as a 19th century pirate adventure, then a romance, then an [adventure] in the style of The Lost World! This sounds like an eclectic mishmash of genres, and it is, but it kinda works, and it makes this unlike anything else from the period!

One of the biggest pluses to Two Lost Worlds is how it changes things up every 20 or so minutes. I'm sure the movie would've been fine had it only focused on one for the whole movie, but instead we get the high seas battles in the first third, the romantic love triangle with calm country life for the second, then a desert/tropical island filled with dinosaurs for the third! There's never a dull moment in such a varied picture. The only downside is that each of these sections perhaps could've done with a bit more fleshing out, but as it is, it's certainly not bad. 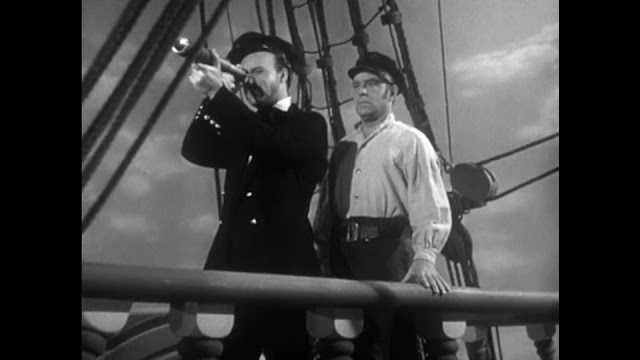 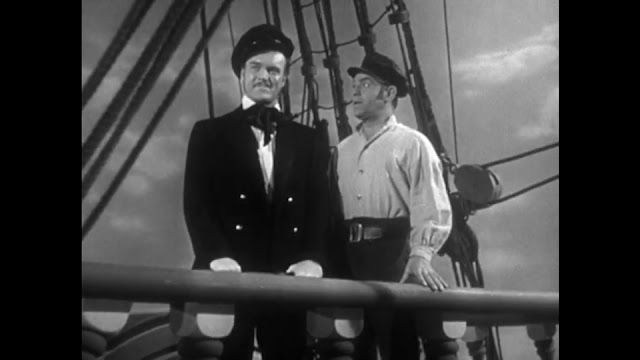 The name of this picture is of course Two Lost Worlds, Not just one, but two! How's that for getting your mony's worth! Where/What could this second lost world be, you ask? Why, Australia of course! *stifles laughter* What's even more amusing is that no-one in this film even attempts an Aussie accent! They speak of Yankees, yet they sound like they just stepped out of California! However, that astonishingly say Brisbane correctly!...Of course, they mispronounce Queensland, but who cares!

Getting into further detail about the sections, the first is mostly good despite its short length. Kirk is presented as the best specimen of American men imaginable, and there's nothing he can't do. Other countries can do naught by take his fine example!] 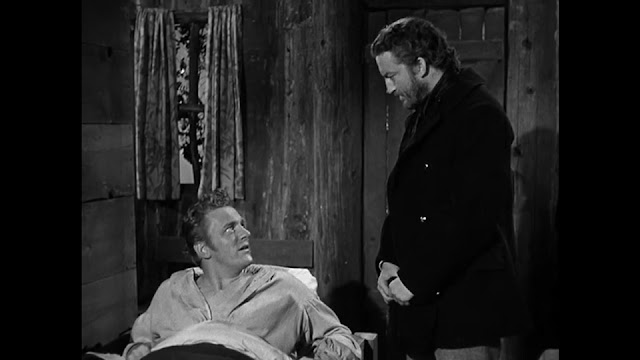 After this, the movie calms down a bit and enjoys some casual romance and comic relief. The love triangle is portrayed decently, but it's a little too obvious what's gonna happen. There is a token effort to make the other man an alright bloke, even if he is overly jealous, quick to punch his rivals, and destined to lose the girl simply by not being the main character. Though at times his attitude comes across as 'How dare she hang out with other men? Doesn't she know she's going to be my betrothed?!'.

This is eventually broken up when the pirates invade once more. They kidnap Elaine and another girl, Nancy, who I didn't know  but she seemed important, since along with Elaine she's one of the only two hostages!...Of course, she dies almost immediately once the group's on the island, and like it's nothing, too! It happens so quickly it barely even registers, then she's quickly forgotten. It felt pretty mean all things considered, the way it happens, and the way no-one cares. 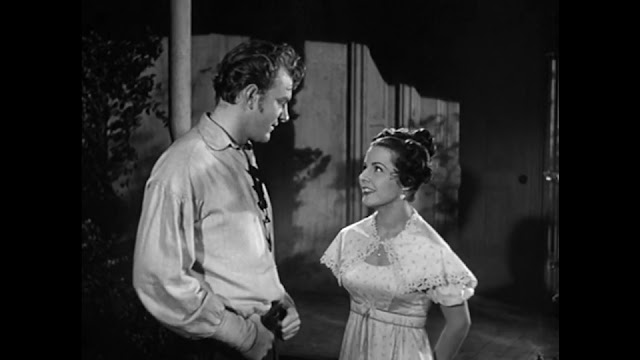 The section on the island is pretty light on story, and heavy on exploration as the ever dwindling cast try to find food and shelter. Not a whole lot happens, but it's not like this is the whole movie, so I was never bored. The film concludes how you'd expect, with a miraculous rescue, but too late for the =, who graciously dies to allow the main duo to get together (as we knew would happen).

Overall, it's a bit of a depressing end for the island! There was already enough at stake I felt, plus enough characters before the shipwreck had already died, so it's pointless when more drop like flies. Also, what rescue team thinks it's a good idea to check out an island where a volcanic eruption is happening/volcano is erupting? Yeah it makes for a great signal, but not only is it a massive warning to go nowhere near there, but also a pretty good indicator that if the survivors are on the island, they are so dead! 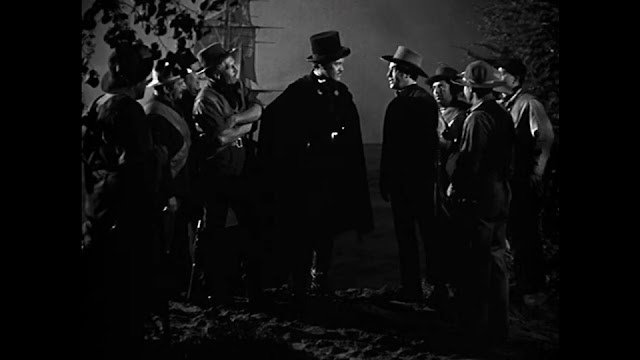 One of the strangest things about Two Lost Worlds is the overlong and overdramatic narration, which tells us everything we'd ever want to know about life in America or Australia, about Kirk Hamilton (who it insists on naming in full each and every time), and its own views on the way of the universe.
"Hereto as in America, a new civilisation was being built on a primitive frontier. Here where wild kangaroos hopped among the fields, the land was forced to yield to the farmer and the rancher. The land meant security, and the bright hope of the future."
"But the plans of Elaine Jeffries did not reckon with the plans fate had drawn for the young American. Nor did Elaine reckon with her own heart. She did not reckon with the springtime. And Springtime in Queensland is just the same as Springtime anywhere in the world. There is the same bright sunshine and the fresh green on the hills. The quickening pulse in the earth is the same. The fragrant caress of the wind is the same. The stirring life is the same in the trees, in the flowers, in the birds of the airs, and a man and a woman are the same."

You can imagine what those walls of text are like when narrated in a =newsreel voice! He delivers them well at least, if nothing else, and they were always amusing. The only places where the narration feels unwelcome is when it talks over scenes, or explains things we can already/plainly see  He also has a weird habit of always referring to characters by their full names 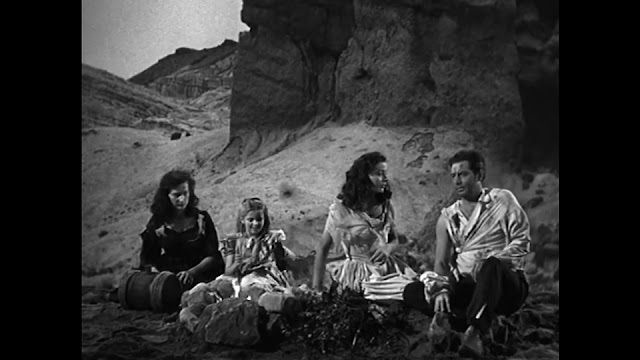 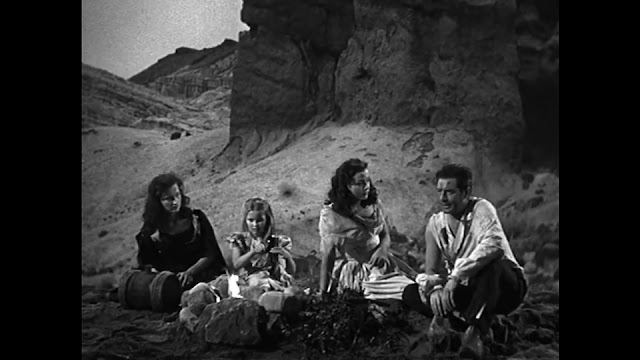 There are some funny moments with younger sister Janice, such as her determination to make the amusingly named sheep Magic 'smell like a lady', and her crush on Kirk-"I don't care if he does limp, I think he's grand." Elaine: "Janice!"-"I don't care, I'm going to marry Mr. Hamilton."-"You're what?"-"Why not? After all, I'm almost 10 years old!". 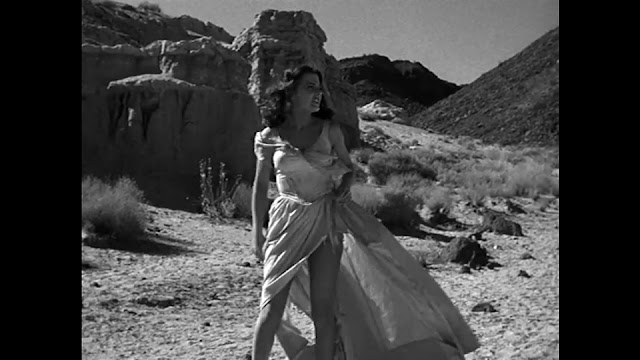 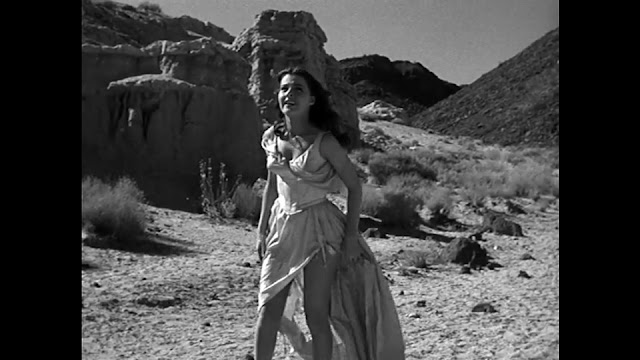 The acting here is all good. Everyone does their jobs well, with James Arness being a good lead, and no-one doing that bad of a job. Some scenes aren't performed as well though, such as when a romantic encounter between the leads is ruined by a jealous punch, and Elaine hurries in too quickly and breaks up the fight, before Kirk had a chance to 'act like a child' as she says.

The villainous pirates do the best they can with their limited screentime. There's zero effort to make the pirates look like traditional  though. I guess this makes sense, since those kind of buccaneers weren't out this far, but it'd at least be interesting, and distinguish them from everyone else. 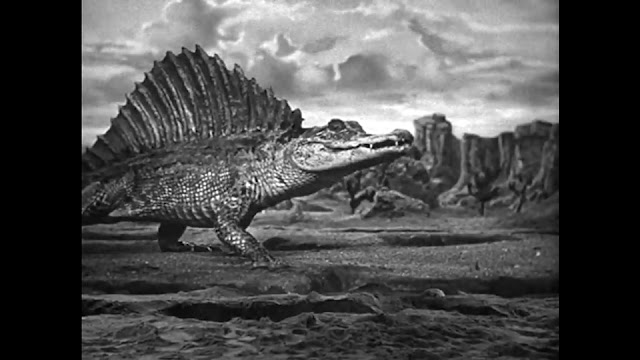 Two Lost Worlds may look quite good, but it's a low budget movie through and through. It utiltises its budget very well, and you'd never think this was a B-movie. Where the cost-cutting measures are most apparent is in the large amount of stock footage used. This could have been a very big problem, it's mostly integrated very well! The first sea battle is a little obvious with how James Arness is clearly reacting and giving instructions to things in a different movie, but the second is pretty seamless. Most importantly, the encounter with the dinosaurs actually looks like it was made for this. What is a problem, however, is that because this scene is from a different film, that makes it impossible for Two Lost Wolds's cast to interact with it, meaning they're never in any danger (or even any real inconvenience) from the dinosaurs. Said dinosaurs, by the way, are lizard with bits stuck onto them, and hilarious roaring sounds dubbed over them. For this amusing visual we can thank/blame One Million Years B.C. 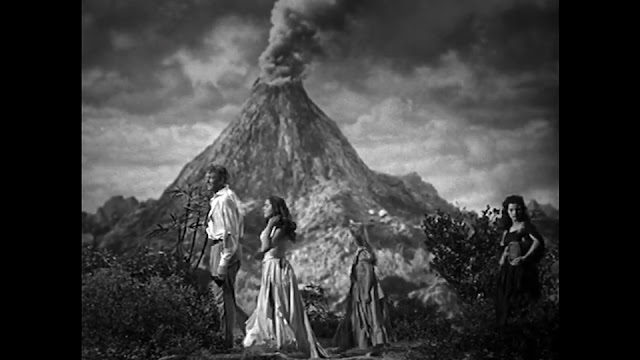 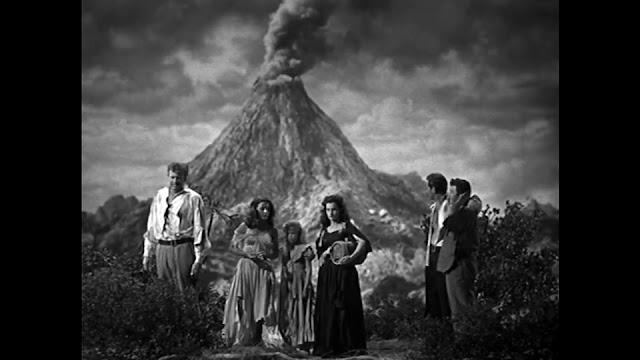 Discounting all the stolen footage, Two Lost Worlds honestly looks really good! From the pirate attack on land, the waterfall at the enc of the chase, the volcano off in the distance, no 'expense' has been spared. Even the opening credits are very stylish and creative, with their leatherbound book format. I wish more movie credits were like that! 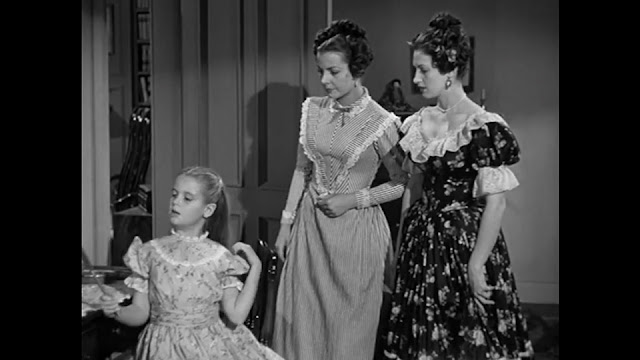 Two Lost Worlds isn't perfect, but regardless of whether or not it succeeds in what it sets out to do, the fact that it tried is good enough for me, and the effort put into the film makes it stand out among other films of the era. For that it's worth watching, as well as for the cheesier and cheaper elements. No matter what you're looking for, this should be a fun time...
Posted by Chris Hewson at 9:11 PM