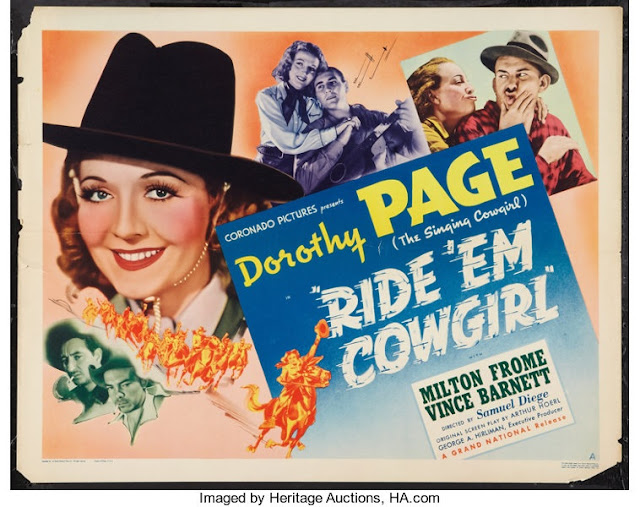 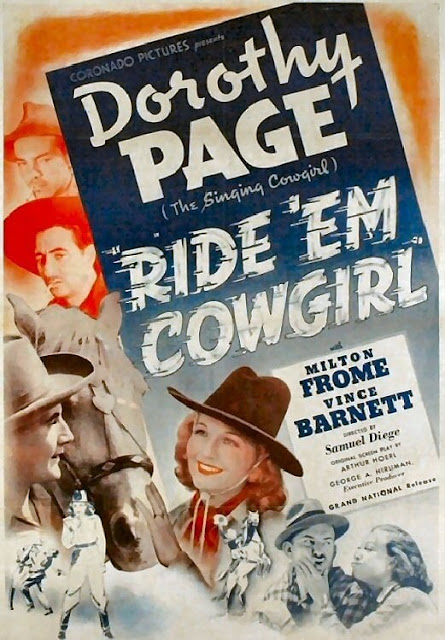 In the 1930s and 40s, westerns were in full swing. Of course there were the famous big pictures, but there was also an absolute deluge of little ones. Short 50 minute packets of rip-roaring adventure[s], with noble but bland heroes, sinister outlaws, lots of singing, and occasional ghosts and ghouls. 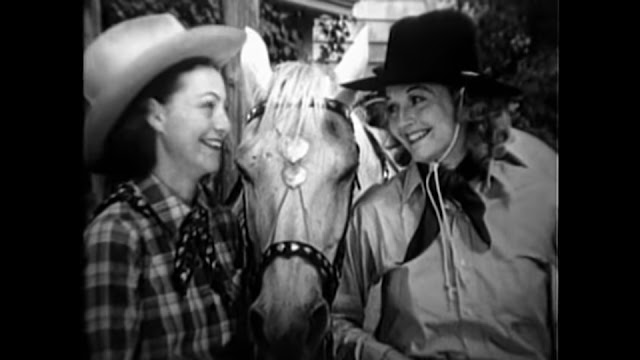 Out in the not-so-old but still very much wild west, cowgirl Helen Rickson keeps the peace. The police respect her, her family and friends adore her, and local outlaws fear her. Helen's father falls in deep with some gambling debts however, and a high influential criminal uses this to frame the family for theft of $5000 dollars worth of prize money. Now on the run from forces good and bad alike, Helen must find a way to stop these crooks and clear her name...

The...um, suggestively titled Ride 'Em Cowgirl is a perfect example of these [quickie] westerns. It's got all the trappings, and a familiar story, but it manages to be a fun ride. 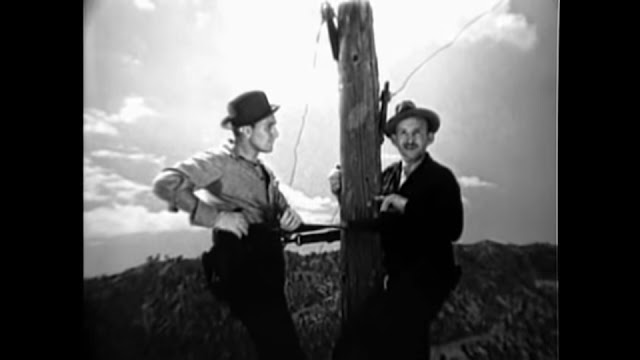 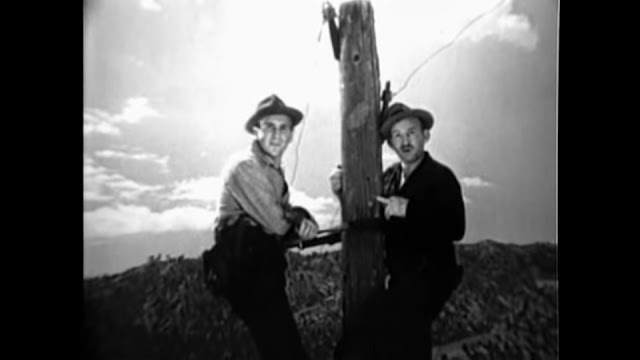 I went into this expecting the most basic level western, and it is that, but it also surprised me a lot with the sheer amount of effort put into it! It may be a dine a dozen story, and the male lead may be as forgettable as a whatchamacallit, but despite its short length of 53 minutes/53 minute length, Ride 'Em Cowgirl is a very snug film. The plot is effective, the action is entertaining, the characters each get their times to shine and plenty of screentime, and there are even effective callbacks to earlier in the film. For such a short and simple movie, it's a lot of fun seeing this much/level of care behind the scenes.

For a film made in the 1930s, this is quite progressive too! The lead is a badass cowgirl who's never stuck in the kitchen, washing anyone's socks, nor rescued by others/men an unreasonable amount. I also appreciate that nothing is ever made of the fact that she's a woman. No hamfisted lines/dialogue to drive the point home. Just simple straight to the point cowgirl action, with her actions saying everything that needs to be said. 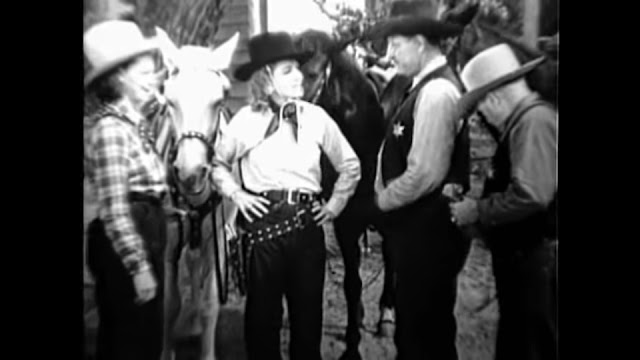 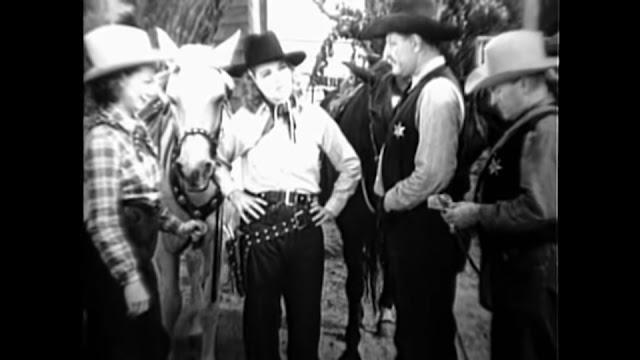 Not only is the story in Ride 'Em Cowgirl a typical one, but all the old cliches are here. A single punch in a saloon causes an uproarious bar-fight where no-one is safe, and guns magically never run out of bullets[, no matter how many shots are fired]. Characters also have the unhealthy habit of gesturing or scratching themselves with their firearms. I get that you might have a real itch, but please, put it away! All of this provides a lot of life, making this a comfy viewing experience.

One interesting element to the film, which shocked me at first, is that it's set in the modern day!...Well, it iwasi set in the modern day. [Yes,] there are cars, telephones, and other kinds of nifty appliances. I quite like this. It doesn't feel like a budget-saving method (as these are elements easily enough kept out of sight on a cowboy set), and it shows to the audiences at home that just because you live in the present, doesn't mean you can't still have a cowboy/western adventure of your own! 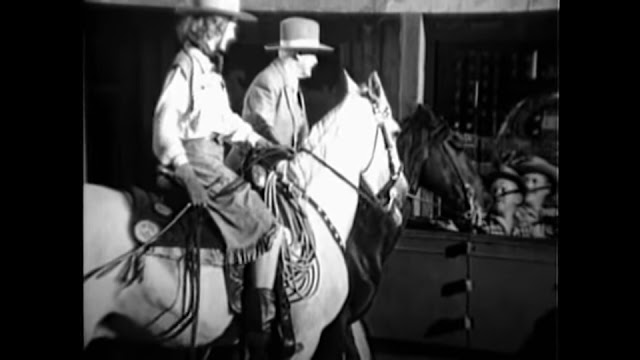 Getting properly into the characters, they're a likeable bunch. You've got the heroic rancher/cowgirl Helen, who has a keen sense of justice. Helpful stranger Oliver is utterly unremarkable, so now that I've already forgotten most of what he does, let's move on to the other characters. Belle, former Vaudeville actress turned amateur cowgirl, is a fun and lively presence. Spunky without being obnoxious, and justifies her [presence] throughout by being a good friend, and a nice source of comedy. Then there's Oliver's sidekick Dan Haggerty, who's an amusing comic foil. He's not just a dopey klutz though, but also gets some sincere romance, straightlaced scenes, and plenty of competent and heroic moments!

Even Helen's father gets a bit of complexity to him. He's a goodhearted and loving man, but is also flawed, as he's got a gambling problem, and barely thinks twice before putting his precious ranch up as collateral.
portrays him well as a kind but flawed man 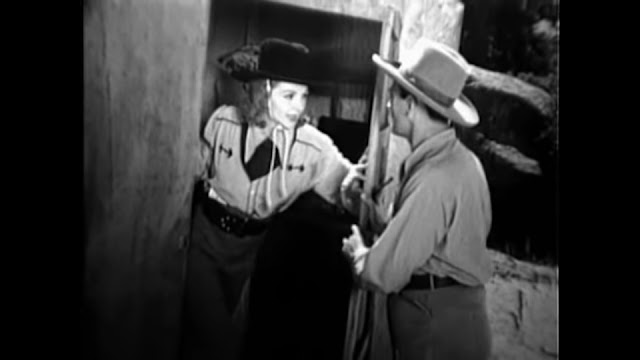 Dorothy Page is a great lead. She has just the right mix of [pure] without being bland. Milton Frome meanwhile has iexactlyi the wrong mix/perfect mix of being bland. He's nice, but completely forgettable, and I could barely remember what he even looked like throughout. Still, he never does a bad job, to his credit.

Lin Mayberry is a ton of fun as city slicker Belle, endearingly clumsy, while also being genuinely helpful, and friendly. Vince Barnett is treated very well here. He was mostly known for being comic relief, and he does fit that role here too, but he's given actual character! He's also visually distinctive, especially when standing next to the faceless man who plays the male lead. 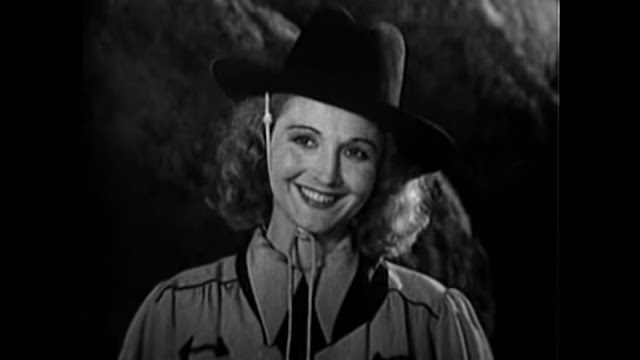 And lastly, I would be remiss if I didn't mention the valuable part the horses play in this picture. They're adorable, talented, and act their roles perfectly, with nary a misplaced hoof.

There are a couple of songs here, and they're alright. Nothing special, but nothing horrible either, and they're sung well. They're your [typical] tunes of romance under prairie moons, etc.

Ride 'Em Cowgirl is directed with a decent eye for visuals. The gunfights are all staged well, and the galloping horses do a good job with the races and chases. Some of the close-quarters fights can be a bit of a jumble though. 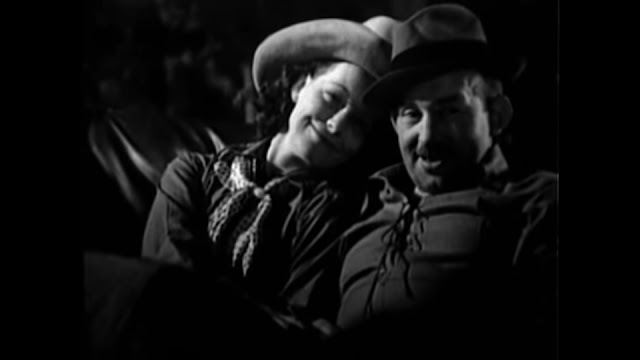 To finish, Ride 'Em Cowgirl is a perfect example of the common 1930s westerns.  It's a great mix of fun, intrigue, romance, and adventure, and is well worth a watch if you're a fan of the genre. If only the writers knew the importance of a comma! I swear, if it was Ride 'Em, Cowgirl, no-one would think anything amiss!...
Posted by Chris Hewson at 3:15 AM