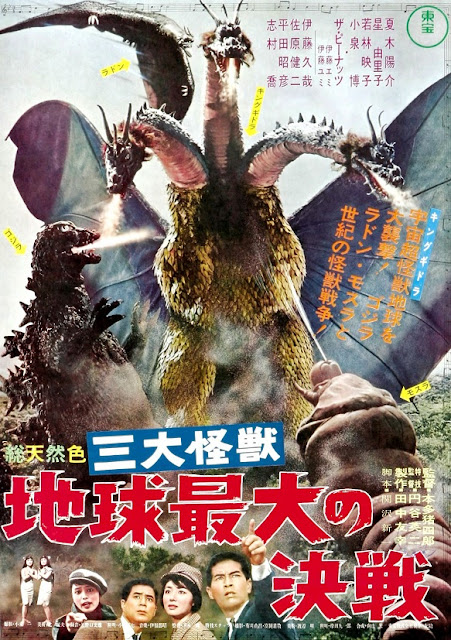 Godzilla was known as a villain for a fair while, but gradually slipped into a different role. Why was that?
In Japan, many things are happening at once. A series of meteor showers follow other strange weather patterns, leading to the arrival of a large meteor with mysterious properties. Elsewhere, a visiting princess from an island nation narrowly survives an assassination attempt when a guiding voice leads her to safety. Now possessing the mind of a Venusian, she warns humanity of the oncoming threat of King Ghidorah, a horror perhaps too great for even Earth's monsters to beat... 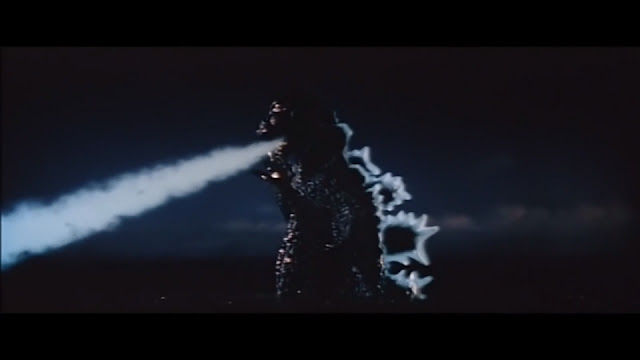 Ghidorah, the Three-Headed Monster is a classic entry in the Godzilla franchise, introducing his arch-enemy King Ghidorah to screens for the first time.
This is a good movie, but I was worried it wasn't a good monster movie, since it takes half the film for any to show up! Godzilla first appears nearly 45 minutes in, and Ghidorah even later. I wish Godzilla would have shown up sooner, but at least the movie is honest and doesn't feature him in the title, so you won't get too annoyed at his lack of screentime. Ghidorah though could have done with more. He's meant to be this big bag apocalyptic threat, who can reduce whole planets to wastelands...and yet all we see him do is fly around and knock down a couple of houses in a small village. 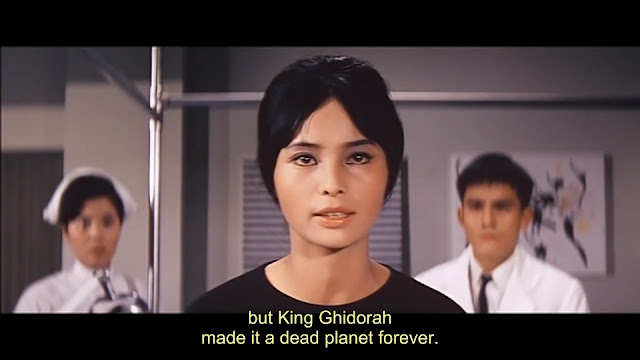 Because of this, his arrival and the climax doesn't have the impact it should, because the events of the whole last act really only take place over an hour or two. The final battle is also the only encounter Ghidorah has with the three monsters, so it would have been better if they'd had some encounters prior to this, where we'd maybe see the friendly kaiju lose, and see first-hand what huge threat they're up against.
Despite this issue, the movie is very entertaining. The human plot is engaging, as it has to be, and the monsters are lots of fun when they show up, never feeling too underchanged. There's always plenty going on, and the movie bounces from one place to the next at a nice pace. 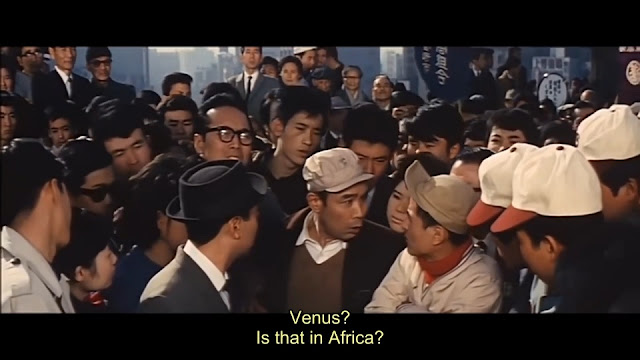 The tone this film strives for is a balance between serious and slightly goofy. It builds up Ghidorah well, with creepy moments such as the Princess's answer of "Yes, he is already here...". Then you have elements such as the Mothra twins, who are more lighthearted, and keep the movie from being too dismal. The film takes these things entirely seriously, with hilarious results. One of my favourite moments was the press conference with the twins, answering questions into enormous microphones as reporters hunch above them. 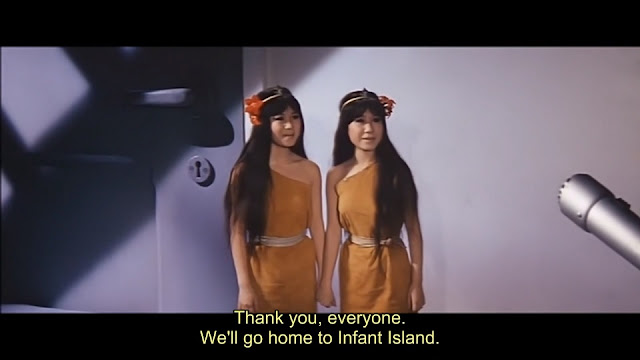 There are plenty of monsters here on display, each feeling pretty distinct. Godzilla is his usual scaly self, though this was the first entry in the series where he became more of a good guy, protecting Earth from evil. He's a little reluctant, considering he's not fond of humanity always getting up in his face, but he'll save us if he has too. Rodan is less distinctive, being just a funny bird, but is otherwise fine. Mothra acts as the mother of the group, keeping the two 'children' apart from each-other, and convincing them to join forces. She's a real badass too, when she's rejected by the others and goes to fight Ghidorah on her own! Thankfully they see reason and join in, and that three-headed bastard has no idea what's coming! My only disappointment is that we only see her in her larval form, and never as a giant butterfly. 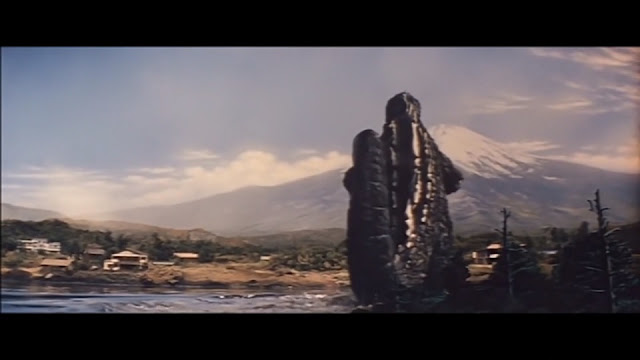 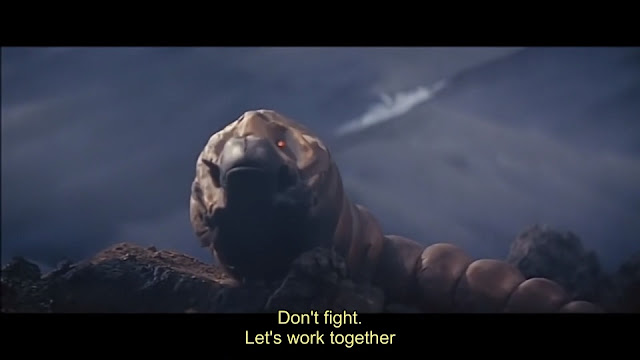 Ghidorah is a decent villainous monster, but appears too little to make the biggest of impacts. He has a great design though, and is always a convincingly powerful opponent.
Perhaps the cheesiest moment of the film is also the most endearing-The 'council of Mothra'. Some find it anthropomorphises the monsters too much, and others would struggle to even pronounce that sentence. I feel it works. I don't want the monsters to be given more human characteristics like this all the time, but every now and then is a nice treat, especially when it leads to such fun moments, and inspiring character journeys. It's great seeing the trio argue and come to blows, but unite in the end! They have more character than many humans do in some films. 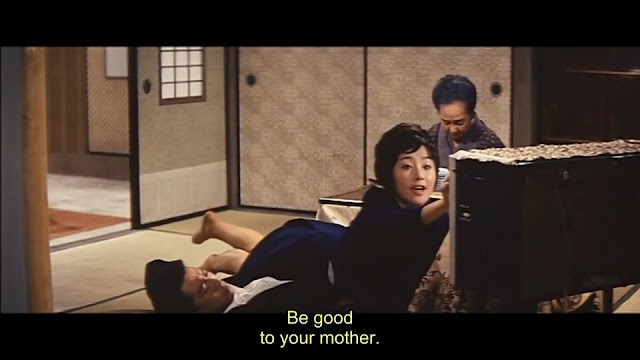 Getting to the human cast, they are very good. We've got a typical bickering brother and sister Naoko and Shindo, one a policeman and the other a reporter. They have good [chemistry] and fun interactions. The princess is interesting, as a vessel for a lost planet's society, but her being a princess comes into play very little, only serving as a reason for Shindo to be interested. I wish we could have seen a little more of her true self, as the romance between them is sweet. 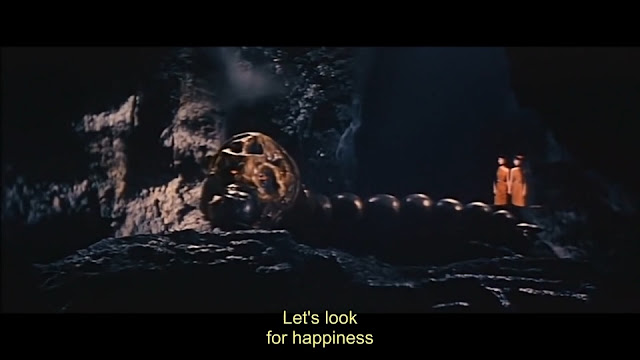 On that note, I'm not sure why nobody believed her story about being a prophetess from another planet. After all, this is a world of giant monsters! In one scene, she's in a hospital where the resident doctor is skeptical of her story...despite being accompanied by two tiny women, while a PA warns that Godzilla is near. And yet a Venusian seer is a bridge too far apparently.
The supporting cast are decent enough, including a superfluous but likeable bunch of diggers by Ghidorah's meteor. The royal villains play a good role, disappearing for some stretches, but often having important things to do, and providing a good human opponent while the monsters fight Ghidorah. And lastly, the Mothra twins (or Shobijin in Japanese) are cute and helpful! 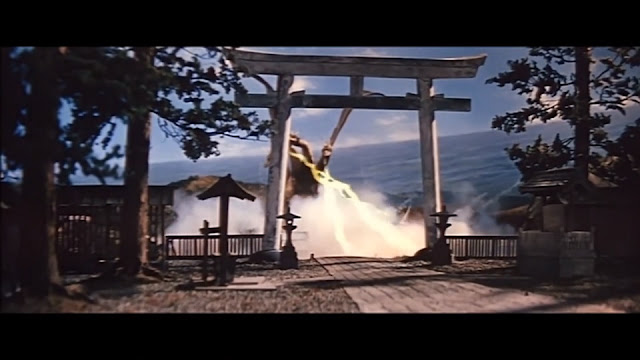 The effects are a high point as usual, though the monsters look pretty cheesy, almost like Muppets, to the point where I wasn't sure if there were any actual actors in those close up punch-ups between Godzilla and Rodan. They looked like two fake heads bonking into each-other. But it's not bad at all, and fun too watch. They never move unconvincingly.
The miniatures meanwhile are spectacular! We may not get to see a huge amount of them, as the location of the rampages are in a small township but what there is looks great nonetheless. The way the buildings fly apart from the sheer force of wind when Rodan and Ghidorah fly overhead is realised very well too. The integration of the giant monsters and real locations is seamless as always. I especially liked the imagery of Ghidorah approaching the town gate. The location sets all have a nice look to them too. 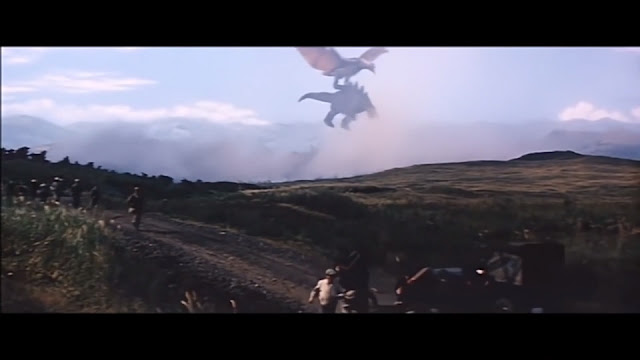 The monster fights are all well choreographed and a joy to watch.   tail slapping picking him up and dropping him like an acorn/pinecone   which is all leading to the final brawl. Poor Godzilla takes a few hits below the belt, but he dishes it out plenty of punishment in return. Ghidorah may live to fight another day (as soon as the very next film), but one thing's for sure, he's not leaving Earth without much embarrassment! 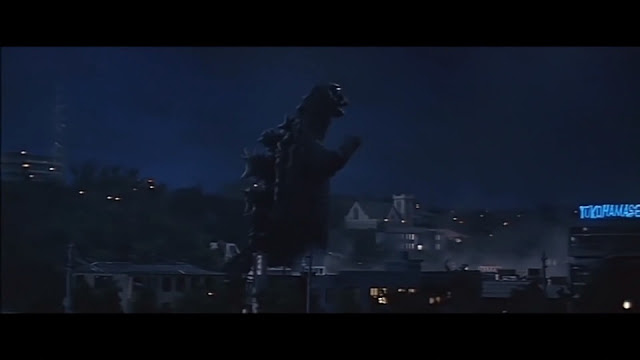 The acting here is all good. The characters do blend together a little sometimes, but it's not a huge problem, and you're able to tell who's who for the most part. Yosuke Natsuki, Yuriko Hoshi and Akiko Wakabayashi are all good performers, bringing something different to each of their characters. Akiko especially succeeds in not only the role of the Princess, but as her Venusian self, making her appear suitably alien and distant, without coming across as wooden.
The English cuts of Godzilla films could often become hatchet jobs for a variety of reasons, but Ghidorah, the Three-Headed Monster has one of the better ones. Its changes are minor, and help serve the plot and characters, according to some, and it also contains one of the greatest moments in the series! If you've seen it, you'll know the one I mean. For that reason alone I recommend watching this film in either language. 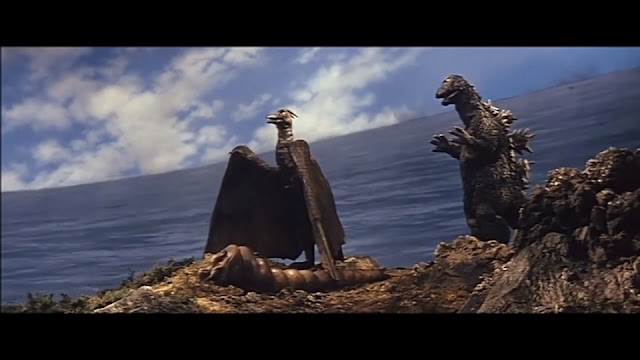 Overall, Ghidorah, the Three-Headed Monster has some issues, but they're easily overcome, and give way to a very enjoyable film, proving that even with some flaws, this series can still provide hours of entertainment... 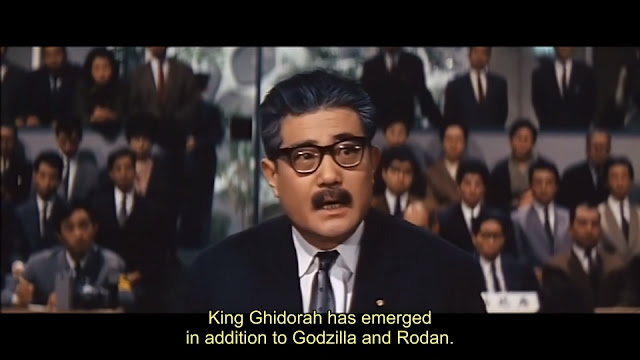 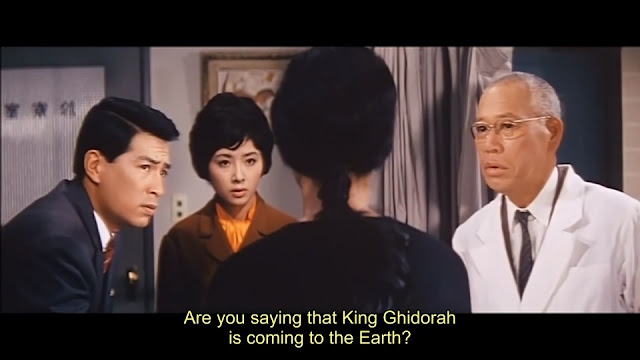