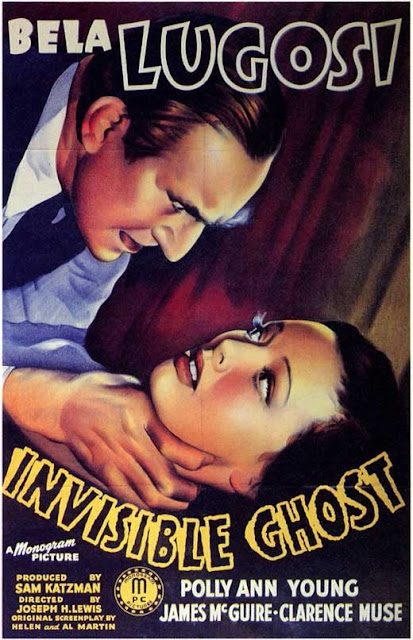 Mr. Kessler is a well adjusted gentleman in all but one aspect. Once a year every year he has a dinner with his absent wife, acting as if she's there. His wife really ran off with another man some years ago, and the family have been waiting for her return ever since. Little do they know that she's never left. Having been in a car accident that claimed the life of her lover, Mrs. Kessler has been cared for by the household's cook and his wife, and kept hidden in their basement. Occasionally she leaves to wander in the night, and is witnessed by her old husband, driving him into a psychotic rage... 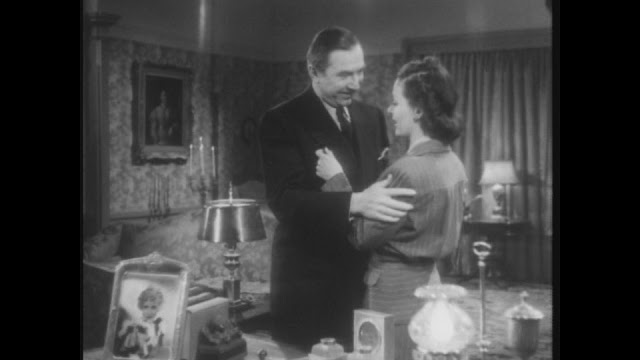 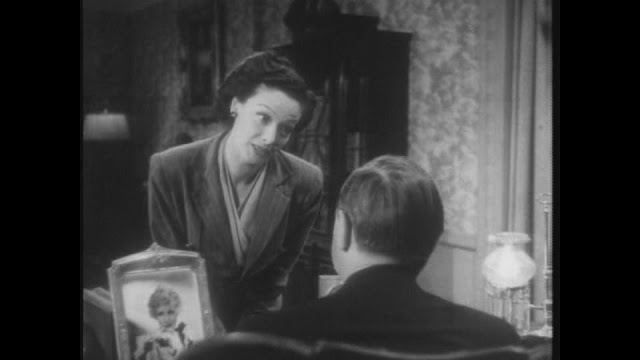 Invisible Ghost is one of the better Monogram offerings starring Lugosi. It's not exceedingly silly, it's well-crafted, and it starts off with a very intriguing story! Seeing the one-sided dinner is a great hook, and finding out that the wife is still alive makes you eager to know what exactly is going on, because it's gotta be interesting! The proceedings up to this point don't seem indicative of the title at all, but in a good way. It makes you go "Ooh, I wonder how this is all going to tie together with the titular invisible ghost!"

One positive is in how the movie never really tries to top anything that's come before, but instead knows its limits and strives to do a good job with this concept, even if it doesn't quite succeed. 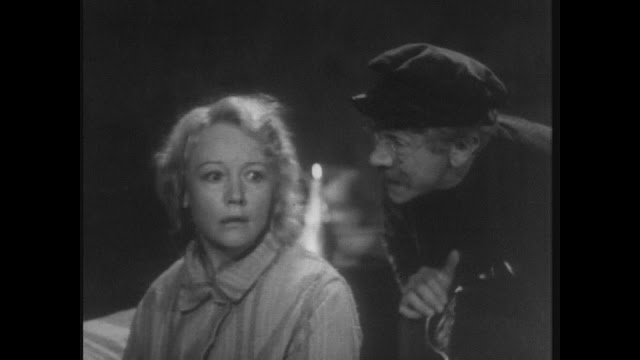 Now come the negatives for Invisible Ghost, which sadly sunk it for me. While the plot starts out interesting, it feels a bit like there are too many threads that either don't go anywhere or don't feel fully fleshed out. A good example would be Kessler's wife really being alive. A simpler explanation for events would be that she really is dead but maybe her husband killed her in a fit of jealous rage, and sees visions of her that compel him to kill. That would make more sense than the actual reason given for why seeing his old wife gives him a homicidal split personality, that being zero reason, as the movie never bothers to tell us.

The characters are all pretty unexplored. Jules the cook and his wife have been nursing Mrs. Kessler for god knows how many years, and it's never really explained why they're doing such a thing, nor does the wife ever appear again after her husband is killed (assuming he didn't survive. I wasn't clear on that), despite still harbouring Mrs. Kessler, and having suspected her of the murders earlier on. Kessler's daughter Viginia is pretty underused, and doesn't really do anything. Nowhere is this exemplified more than in the climax, when Kessler is attacking the detective, and while trying to stop him Paul tells the newly emerged Virginia to get back into the room she came from, which she does, and she's never seen again! The poor girl doesn't get an ending, or even a moment where she realises her father was the killer all along. 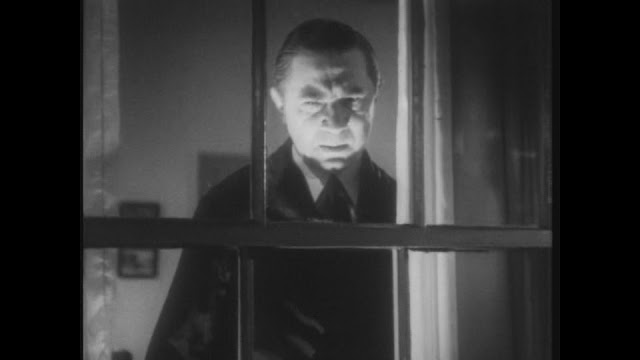 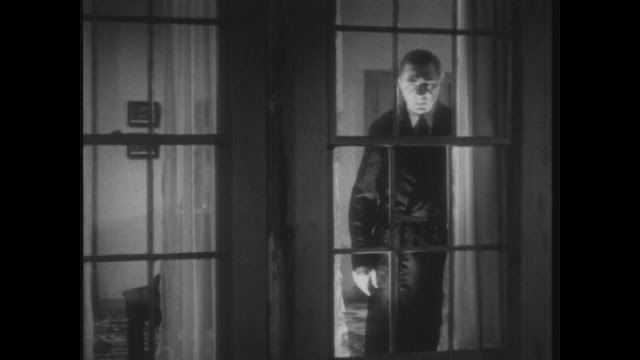 Love interest Ralph's death comes as quite a surprise, as you're sure he's gonna make it and these young kids will find happiness, but nope, he gets executed! Certainly a shocking turn of events for such a film, to say the least. Rendered less effective however when his identical twin brother shows up to take up the role of protagonist. The bother Paul is pretty milquetoast, and easily could've been cut from the film.

A psychiatrist is plucked in from the ether 9 minutes before the end, ostensibly to give an evaluation of the butler Evans (which he does a shitty job of, by the way), who the police figure must be the killer since no-one else could be, but it seems clear his only purpose is to diagnose Lugosi at the end in such a way to explain his condition to the characters, and the audience. That's all well and good, but the problem is that the dude takes so much screentime away from what should be the climactic last act that the climax to end credits is literally only 5 minutes! It feels incredibly rushed, especially given how much there is to wrap up, like a reveal of Kessler's murderous double side, his wife as alive, and Ralph's vindication. Making it even more unnecessary is that the psychiatrist just vanishes without a diagnosis anyway.

The most out of place thing about this movie is the title, Invisible Ghost. I was prepared to give the writers of this a bit of slack for the seemingly poor name, on the grounds that they may well give a good enough explanation as to why this ghost is specifically invisible, as that'd otherwise be a pretty unnecessary thing to point out. Since this film doesn't even have a ghost. invisible or otherwise, I can feel free to criticise.

The direction in Invisible Ghost is perhaps the greatest surprise, as it's really quite good for a b-movie from this period, with a camera that either moves around in creative ways during scenes, or is situated in more unique places. Scenes that are all shot in one take are great for an actor too, as it gives them a chance to really test their skills, and that can show to the audience at home. 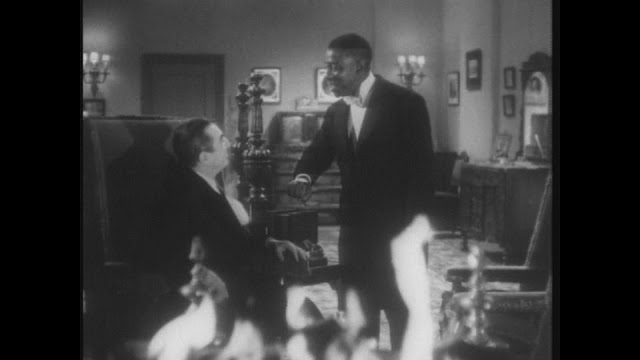 Lugosi delivers a fine performance. He's not a dastardly villain, or even a noble hero, but just a random nice fellow. He's rather cuddly! As for his wife-induced murder freakouts, he's spooky, but looks a bit silly the way he eagerly looks for someone to strangle.

Also of not is Evans, a black butler who's not written in a stereotypical way! Hooray! My tolerance for the comic relief 'fraidy cat manservant depends on a few things, like the writing, the acting, and how many movies like that I've already seen recently before that point. Here is a staid and dignified performance by Clarence Muse, a cool dude who did a whole heck of a lot with his life.

John McGuire is ok, though I wish he'd put in more effort to make his two roles feel more distinct, because as it stands, he's exactly the same, even down to how he dresses and does his hair. The actor playing the police detective is likewise ok, but I was particularly impressed by how clearly he could talk despite the massive cigar stuck in his mouth! It's almost comical in how the thing never leaves. Just as funny as a scene where apparently a curtain is the only thing stopping a hidden corpse from slumping over.

Despite its failings, Invisible Ghost is still worth a watch if you're into this sort of thing, and on a technical level is still one of the best films Monogram had to offer...
Posted by Chris Hewson at 8:28 PM