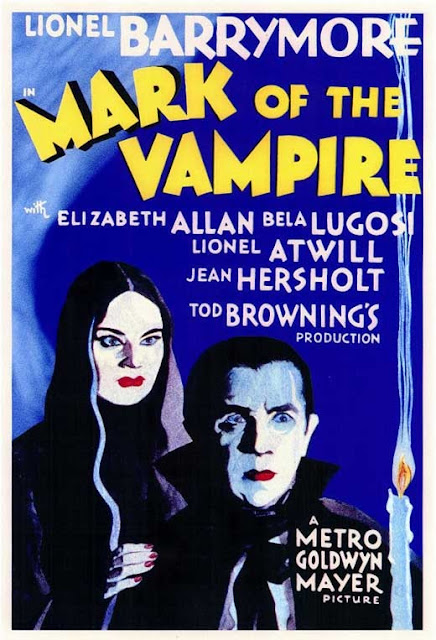 In the British-American parts of Czechoslovakia, Count Borotyn is murdered, with the cause of death being two mysterious puncture wounds on the neck that drained the body of all its blood.Some authorities believe it to be the work of a vampire, but others aren't convinced, determined to get to the bottom of the mystery. A year later, however, the count's friends and family are visited by mysterious beings from beyond the grave... 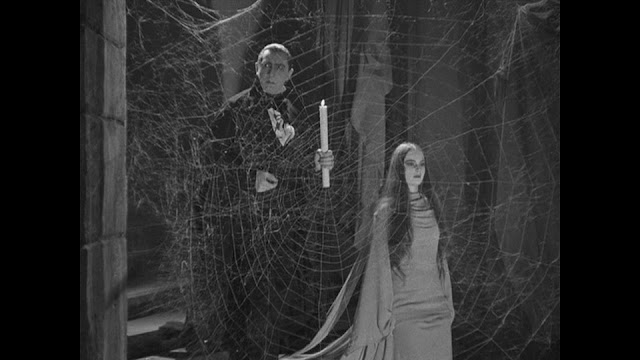 Mark of the Vampire is a very creaky movie, not in visuals or atmosphere, but in story. It starts off spookily enough. There are a few too many characters to keep track of, and while some of them disappear, leaving us with a more manageable cast, those first minutes are still a bit of a jumble. The vampires are visually great, and their scenes are very well filmed and produced, although they come a little too infrequently, and the vampires don't really do much of anything. Then comes the twist...

This film is pretty notorious for its ending, which has sparked many differing opinions, not only from people nowadays, but apparently even in the cast (Bela Lugosi is said to have called it absurd, and I can't help but agree with him!). Ordinarily I wouldn't spoil the reveal, but it's so mishandled that I feel I should. The big twist of the climax is that the vampires are really actors hired by the police. Irena and the police have known from the start, and this was all their plan to force a confession of of the real murderer. 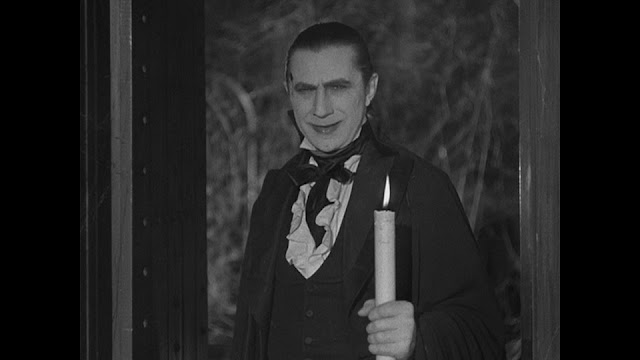 The first problem I have with this twist is it asks a lot of the audience. This 'simple' plan involves hiring a troupe of actors to pretend to be vampires, up to and including rigging them to fly, as well as find an exact double of the dead man who's also an actor and down for this dangerous plot, and culminating in hypnotising the suspect into thinking its 1 year ago and re-enacting hthe murder. That's a lot of ifs and maybes!

Second is the detrimental effect this has on the film's mystery, namely the complete lack of one. The whole movie we're not even aware this is a whodunnit, so it's not very fair in that regard, and it also feels a bit lazy as once we find out what's going on, the identity of the killer is never in question. While it is an interesting idea to reveal that someone thought to be good was a bad guy the whole time instead of the vampires, I feel that Mark of the Vampire mishandled it, partially due to the aforementioned overcomplication, and also because of its clumsy writing.

The third problem with the twist is how it deprives the vampires of any sense of agency. I wouldn't have minded if they turn out to be fake as long as they got a good climactic scene, perhaps eliciting a confession out of the guilty party themselves, but instead they just completely vanish until the final scene, where they're getting out of character after a job well done. The inciting event that gets the killer busted is the professor hypnotising him into reliving the night that Count Borotyn died, meaning the whole vampire rigmarole was pretty pointless. There was purportedly originally going to be a double twist, where the actors hired for the scheme ring up and apologise for not being able to make it...Which brings up the hilarious possibility that not only do vampires do exist, but they're totally down for helping the police!

So, to finish, I would've liked the twist had the film been better written, but as it is it opens up too many contrivances and issues. Still though, it's worth it for the fantastic final scene! The two young lovers barely get a word in edgewise when we're whisked away to the acting troupe, and Bela plays the movie out with his only dialogue in the film. "I was greater than any real vampire"/ An undeniable truth!

Other dialogue s pretty hilarious, from "Fancy, Ronnie, vampires in the 20th Century!"-"Ripping! They'll never believe that at the club", to "If you woke up dead in the morning, drained of all your blood, you'd be afraid of the dark", and from Lionel Atwill "We all thought our vampire scheme was so simple, so certain of success.". 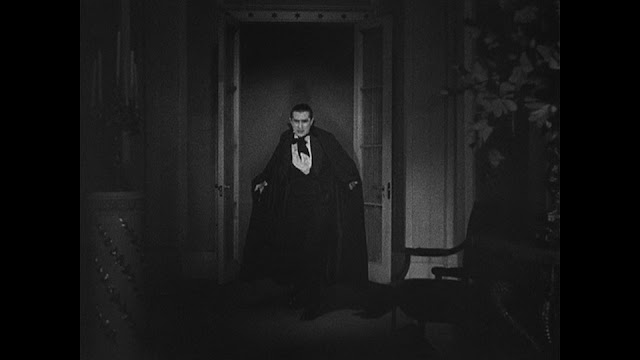 The acting here is mixed. Some of it is decent, while other performances range from laughable in some places to just plain weird (such as Lionel Barrymore). Lioel Atwell is pretty standard as Inspector Neumann, not getting to play anyone dastardly. Elizabeth Allan is overly dramatic in some spots, but she really nails others, like the looks she gives her lookalike 'father' near the end. Caroll Borland is a somewhat ethereal presence as Luna, the female vampire and looks perfect in the role, but is underused. Bela Lugosi doesn't get much to do either, but skillful direction aids his spooky performance, and he pulls it off all without any dialogue, save for his amusing final scene.

The effects and location work in Mark of the Vampire are mostly very good! The sets are wonderful and look like a perfect snapshot of classical horror, with the Gothic castles, cobwebs, old pianos, and menacing descending stairways. There's also quite an animal menagerie, some real, others fake. The bats on strings are pretty amusing, while the fake spiders are adorable. 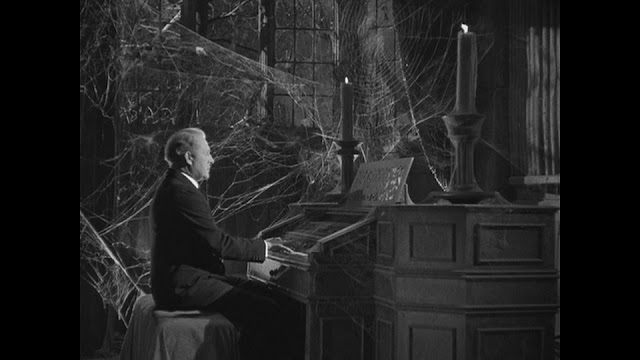 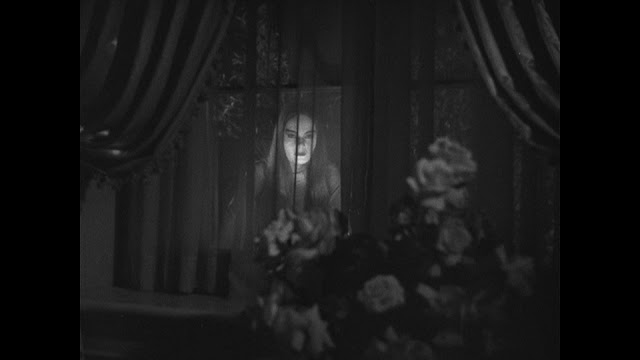 Mark of the Vampire is a flawed movie by far, but it's got enough to recommend it, in a serious way, a and a more unintentionally comedic one....
Posted by Chris Hewson at 10:04 AM