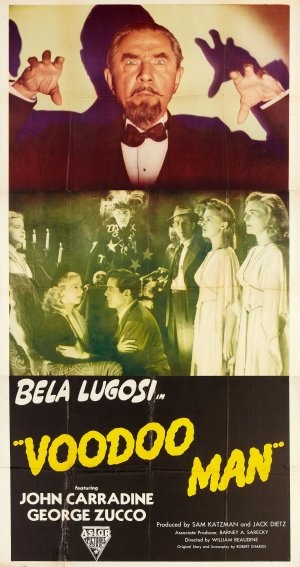 Several women have gone missing on a secluded road, and it turns out they've been kidnapped by a diabolical mad scientist, who's trying to resurrect his sort-of dead wife, aided by a Voodoo priest and two dopey henchmen. Ralph Dawson, a groom headed for his fiancee's home, ends up running out of petrol and is picked up by Stella, a quick talking gal who turns out to be his future sister-in-law. The two connect, but while he's briefly away from the car looking for a phone, Stella is kidnapped by the henchmen and taken to the doctor, who believes he's finally found the perfect subject to bring his wife back to the land of the living... 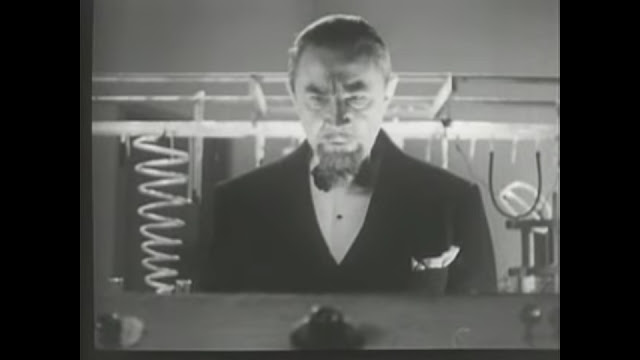 Voodoo Man was one of the later horror pictures Bela Lugosi made for Monogram Studios, and if this script is any indication, it seems like they only had a limited number of ideas they could throw the struggling actor in, as this is quite derivative of earlier films they made with him. While it's a neat idea seeing Voodoo mysticism crossed with mad science, the former feels a bit like set dressing, and isn't really explored in any interesting way, which I suppose we expect from this kind of movie, alas.

The plot is actually a little tense, given that we know Stella isn't the hero's love interest, therefore her life genuinely feels in danger. After all, women and men simply being friends with each-other in a 1940s production? Pshaw! (Yeah, it's kind of a sad indictment of the times!). On the other hand, I feel Voodoo Man throws us into the main events a bit too quickly, with not much in the way of setup. Comparing it to The Corpse Vanishes, this fares less well, as that movie took its time in setting up the threat and what was going on and gradually showing what's happening, and we saw more of Bela interacting with the protagonists before being revealed as evil to them. With everything exposed to us right out of the gate, Voodoo Man kinda ambles around for a while, not really accomplishing anything, or having much in the way of character. The antagonist has got a good motive, if a little played out in these films, but we don't really see much of what else he gets up to. This character is defined simply by trying to resurrect his wife, and I guess we can freely assume he stops like a clockwork mannequin whenever he's not on-screen. 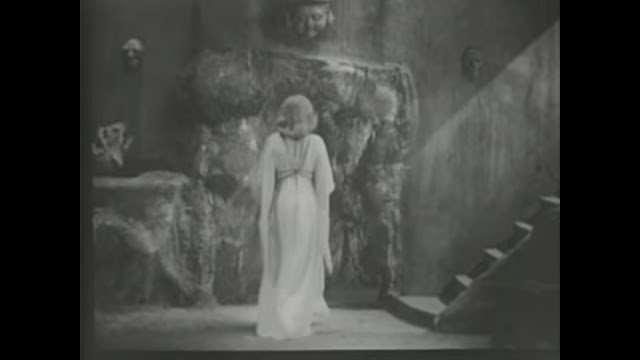 Things do pick up a little in the last act, when the heroes realise something is fishy with the 'kindly' doctor and  hypnotism, but the climax is a disappointment. It's just the same ritual scene we've already seen before, and culminates in a very anticlimactic ending. Ralph is knocked out almost immediately, and it's up to the police to save the day, bursting in with their guns at the ready and gunning down the doctor almost immediately, ending his threat in like one second flat, having faced no difficulty along the way.

The characters are merely ok. Stella is spunky but underused, while Ralph isn't as obnoxious as the male leads in these movies could sometimes be (except when he's getting fuel), but ends up as unremarkable (not helped by his inaction in the climax). Not being annoying goes a fair way though.
and Stella have some good chemistry, and I was looking forward to a sleuthing partnership where the two would be a man and woman duo who wouldn't end up falling in love, but just be pals. Unfortunately Stella spends most of her time after being kidnapped in a state of hypnosis, and the ok but less interesting Betty takes over as the sidekick, not that she does much. 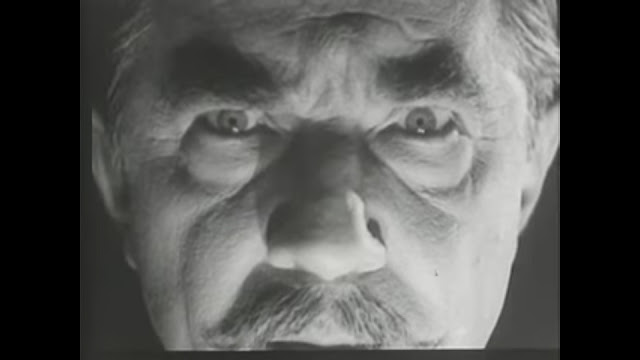 Despite his z-grade trappings, Lugosi treats the script with dignity, turning in a performance that's both creepy, and genuinely emotional! George Zucco plays his assistant, and it's an odd role for him. Zucco has such an aristocratic presence to him that seeing him in a more subservient position is an interesting change, if not entirely believable. The guy's voice is just too commanding! As for his part here, it's just plain weird in places, and he seems to vanish at the end. John Carradine plays a shaky and slow-witted hillbilly, and it too is odd, which I put down to the direction. The remainder of the acting can be pretty amateurish, but it's tolerable.

The most amusing moment of Voodoo Man comes at the very end! Despite their general crumminess, the Lugosi Monogram cheapies attempted metatextual humour a surprising amount! 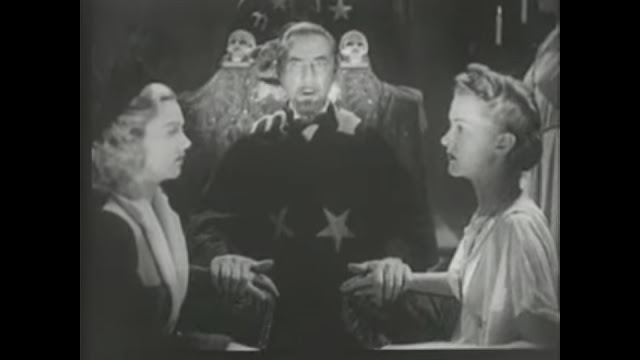 Voodoo Man is merely ok, but that marks it as better than quite a lot of movies of its type, and this one stars Bela Lugosi to boot, among other big names, so that alone makes it at least a little more distinctive than it otherwise would be...
Posted by Chris Hewson at 3:53 AM