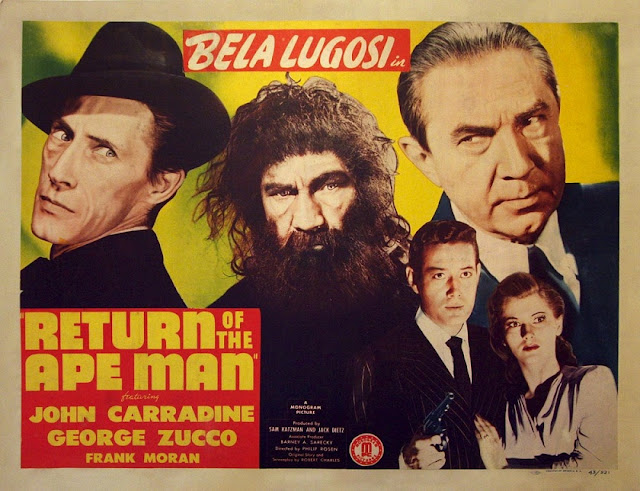 Professors Dexter and Gilmore are two scientists performing studies on suspended animation. After a routine experiment of freezing the homeless for 4 months goes swimmingly, they ponder on how they could test the theory's viability on even longer frozen patients, without having to wait an incredibly long amount of time. In order to find a prehistoric man, frozen in ice, the duo head to the Arctic. 10 months later, Gilmore is getting cold feet (figuratively and literally), wishing to go back home to his wife (assuming she hasn't divorced him already!). No more than 5 seconds after uttering his doubts  the team find exactly what they're looking for and return back home with their find. Upon successfully reviving the Neolithic man, Dexter makes the decision to perform a radical experiment on the subject, for which he requires a section of somebody's brain. When Dexter settles on that of young suitor Steve, Gilmore realises his friend is a madman, and seeks to protect his family, but is taken by Dexter in the process and has his brain stolen to bring new intelligence to the caveman... 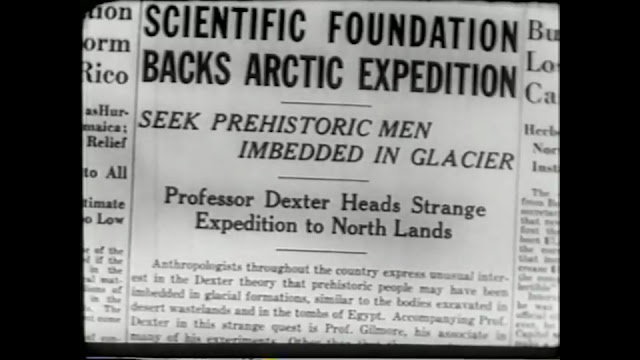 Despite being made by the same team, from the same company, with the same lead actor, this is not a sequel to 1943's The Ape Man. Not only is there not a return, there are also no ape men present! That problem aside, Return of the Ape Man starts off well,    and eventually the plot devolves into a simple 'prehistoric man steals girl and carries her away, before getting killed by the police', which we've seen a gajillion times before (shockingly enough). The weirdest thing about Return of the Ape Man is how Lugosi's character dies 10 minutes before the end of this 60 minute movie, despite being the main villain.

Professors Dexter and Gilmore are pretty rubbish scientists. When they unfreeze the caveman they have no restraints whatsoever, nor any way of proving their find, like cameras or other records, and their method of incapacitating the subject once he turns violent involves not a special syringe, but bonking the guy on the head with a plank of wood. Then Professor Dexter decides to immediately conduct an experiment on the miracle find of the millennium, all before showing him to anyone in the scientific community. Look, dude, I know you're a mad scientist and all, but you're not meant to tempt fate quite that much! 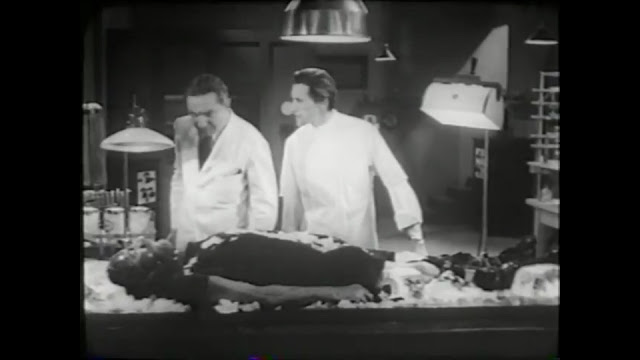 You're probably wondering what said experiment entails. Oh, nothing much. He's just going to perform an experimental brain transfer of a modern man's brain to the neanderthal body. Ok, nevermind that this will probably kill your miraculous find, and would basically involve killing someone else's body (the illegality of which is sure to have the police coming down on your now illegal presentation to the public), not to mention leaving your discovery with the gnarliest surgical scar imaginable. So much for an untouched specimen from prehistoric times! Now when Decter first mentions this plan, I was skeptical on the grounds that 'by removing the consciousness of the original caveman with such a transplant, you're removing half of what makes him interesting! He probably can talk, or learn to talk, you dim bulbs just have to teach him first! But no, by all means transplant the brain of some random guy named Johnny into this ancient body. That wouldn't be boring at all'. However, the movie does explain this problem away with a bit of scientific babble.

There are a few other lacking or weird scenes. For a start, the caveman is somehow immune to bullets, and recovers from extensive brain surgery in what must only be a matter of minutes (leaving no trace of a cranial operation despite his big mane of hair). There's a bit of a missed opportunity that nothing is made of the caveman being Hilda's husband after the operation, as he forgets his prior lucidity and kills her pretty abruptly. I guess that depends on what the viewer's expecting. Myself, I was hoping there'd be a 'touching' reunion where she realises her husband's brain now dwells within a 400,000 year old neanderthal. Overall, the caveman doesn't get a lot to do besides run around and kill a couple of people. Nothing complex.

There's a hilarious police inspection that's on par with Manos, where they literally only search one room in Dexter's house for 5 seconds before calling an end to their search, declaring that they're clearly barking up the wrong tree. Steve even has to suggest they look in the doctor's laboratory too, to which they respond with 'Yeah, we might as well as long as we're here'. Might as well?! It's literally the whole reason you're here in the first place, you dolts!

The climax is fiery and spectacular, filmed very well! The best scene in the movie is one where a caveman is playing Moonlight Sonata, if you can believe it. It's quite effective, in a legitimately serious way despite the inherent silliness. 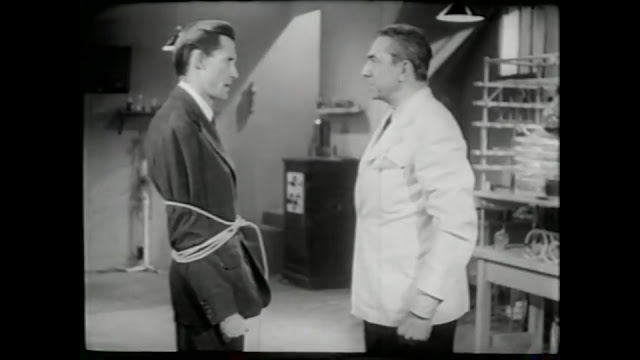 Bela Lugosi is pretty good as a typical mad scientist, although his early death scene kinda precludes him from getting a big final moment. John Carradine gets to play a much more involved and dignified role than he did in Voodoo Man, the part of an equal in the lab rather than a mere assistant getting test tubes. He physically vanishes from the film over 20 minutes before the end though, and only his voice can be heard, albeit pretty fleetingly.

Unlike other male protagonists of these Monogram pictures, I actually quite liked Steve. He's nice, intelligent, and not at all sexist! A shame then that he appears markedly little when compared with Lugosi and Carradine. His girlfriend and Gilmore's niece Anne meanwhile is nice, even if she can't pronounce fiancee correctly. 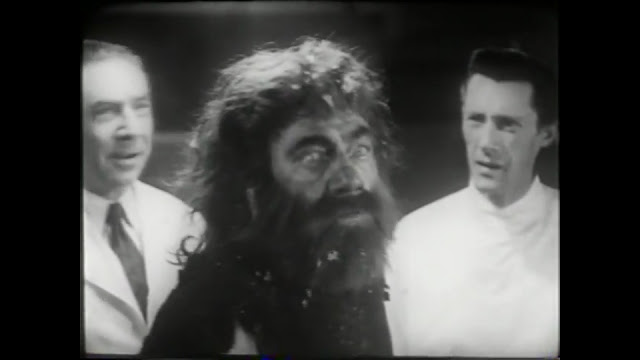 Now we come to the film's main draw. The titular ape man, played at least partly by veteran actor George Zucco, if we believe the credits. Given the title, I assumed this would be another use of those amusing stock gorilla costumes you'd see in all these flicks, from The Savage Girl, to Abbott and Costello's Africa Screams, or indeed this film's 'predecessor', and many others. The thought of George Zucco being in such a role is patently hilarious! However, this isn't an ape costume, but an actor slathered in make-up. For what it's trying to achieve, it looks quite good, but it's also this that makes it plainly visible Frank Moran was the actor in the role. There are a few reasons floating around as to why Zucco didn't end up in the finished product, despite being attached late enough in the game for there to be set photos of him, and a listing in the credits. They range from him having fallen ill, to the producers deeming him too old (a not unreasonable concern given the wild stunts we see the caveman pulling off), and Zucco himself simply refusing the part, which I can imagine. He doesn't strike me as the kind of actor who'd appreciate being stuck in a phony Halloween costume and told to wave his arms about and go 'Grrrrr!'.

As for Moran, he does quite a good job! It's a purely physical role, but he shows off his athletic abilities very well, and even in the shots where it's clear he's carrying a dummy, he's still doing impressive acrobatic while slinging a lifesize dummy over his shoulders! 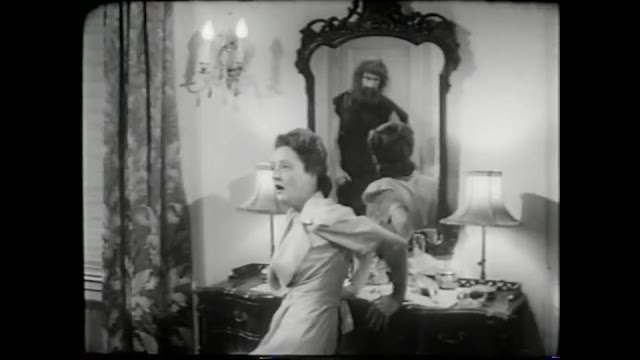 Return of the Ape Man is no The Ape Man, which is a statement that could be taken in many different directions, but I happen to mean it in the negative. This isn't all bad, and it certainly looks decent, but it's a step down...
Posted by Chris Hewson at 8:40 PM