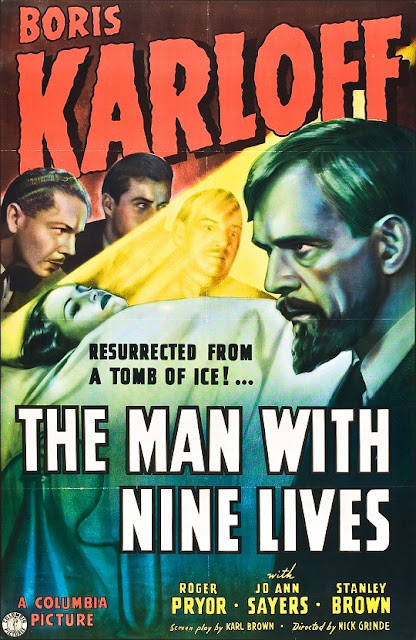 Dr. Tim Mason and his nurse/ladyfriend Judith have been testing the viability of 'frozen therapy'-The science of freezing the human body in order to kill malignant cells, but in such a manner as to keep the patient alive. Mason is doing well, but has hit a couple of roadblocks, and while he's pretty confident about eventually overcoming them in time, he feels a bit hamstrung by the press immediately rattling on about how he's discovered an instant cure for cancer. Mason decides to find the scientist who originally devised the theories he's utilised, but that won't be easy since Dr. Leon Kravaal disappeared 10 years previously. Despite warnings from the locals, he and Judith go to the doctor's secluded island home, where Kravaal and four other men all vanished one day. Through a bit of luck and hard work, the duo soon find the house's secret lab, where Kravaal lies frozen, and they set about reviving him... 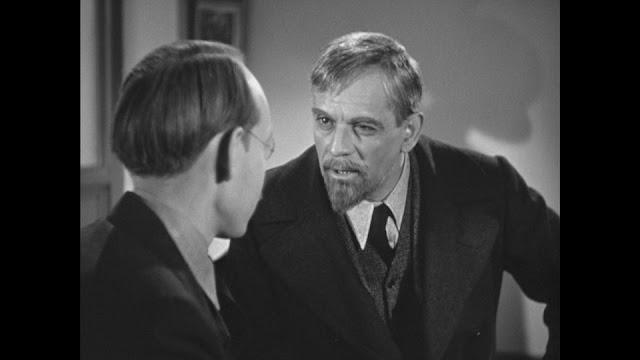 The somewhat misleadingly titled The Man with Nine Lives is quite an enjoyable Boris Karloff flick! I hesitate to call it horror since the majority of the movie is pretty lowkey, but there's an eerie air throughout, in part due to the location, but also the sense of impending dread as the two heroes go deeper into the abandoned house and what lies beneath its confines. When they come across a skeleton, you think "Noo, run away you fools!", and doubly so when they revive the mysteriously frozen man. However, from then on things are quite calm!

It's at this point when a flashback takes hold of the movie for a little while, and Karloff, who had been wholly absent from the first 20 minutes of the film, takes centre stage. This section is interesting in that Karloff's character is not only not villainous at all to start out with, but his studies don't even jeopardise anyone's life, or involve any unknowable black arts! Given his track record in movies like this, you know everything's gonna go wrong for the poor fellow anyway, but even that's a bit of a surprise. For a change, the doubting authorities are actually willing to give him the benefit of the doubt! The gist of their thought-process is "If you won't tell us if your patient is really alive or not, you're under arrest, and will stay here. What's that? Your patient will die if you're stuck here? Well then you'd better take us to him, then we'll believe you.". They're still massive dicks, and despite giving the good doctor every chance imaginable, they still ultimately side against him, but they're still much fairer than the authorities in other Karloff films such as this, who always declared him a madman without so much as a second opinion. 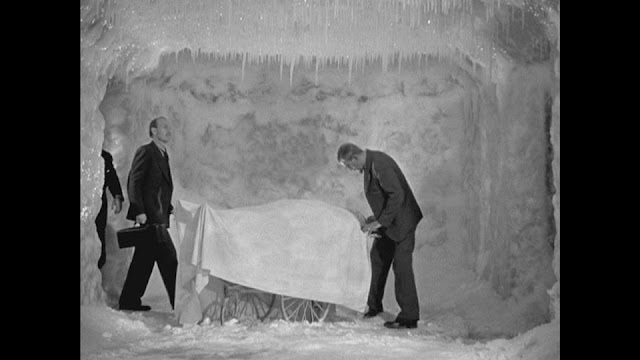 Unfortunately it's at around the 50 minute mark that the story takes a downturn. Because Karloff's character here is legitimately not the bad guy in any capacity, that saps any potential conflict from the story, so the writers must have thought. There are ways around this perhaps, and if you gave me a minute I could think of a few, but they probably figured that Karloff being menacing was the big draw and that they'd better deliver, especially with the evil beard they gave him. Because of this, a story that had been naturally building up to a more peaceable conclusion ends up being thrust headfirst into mad scientist seeking revenge territory in the last act, in a really sudden and frustrating way. The plot that follows certainly isn't bad, but I was still exasperated by the whole thing. The ending coda, meanwhile, is super cheesy, but at least positive and affirming, showing that in the world of this movie at least, great strides have been made for their medical care.

The setting of The Man with Nine Lives adds a lot to the proceeding. Eerie and creative, the cramped laboratory adjacent to an underground glacier is an interesting place, and it's a good thing too considering it's where just about the entire movie is set. The pacing is very good, and even though the movie slowed down for me after Karloff's sudden villainy due to my frustration, things are never boring or slow.

Despite disappearing for a stretch in the middle, Dr. Mason and Judith are decent protagonists. Dr. Kravaal is a very sympathetic character, and you really feel awful for what happens to him as the movie progresses. The remaining cast (the four authorities frozen with the doctor) are ok, and get across their characters' unyielding stubbornness well. The nephew of Dr. Kravaal's patient is an absolute scumbag. He's the loudest voice of dissent against Kravaal's studies, having sicced the police on him in the first place under the misguided suspicion of foul play, and even after being frozen and revived himself, he's still convinced that his uncle was murdered. He turns out to really only care about the money he stands to inherit anyway, and is actively repulsed by Kravaal's noble pursuits. Thankfully he meets a suitably sticky end before too long. 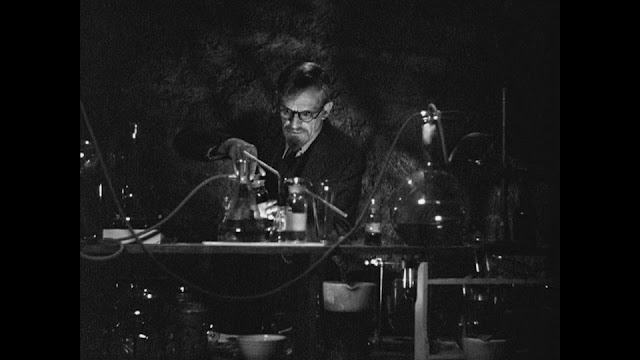 The science of the film is presumably pretty bunkum, but comes across well, with the worst of it being the intro. That however could be explained as exposition telling us the audience that in the world of this movie, such science has been found to be viable, sort of like if a movie set in our near future has a text card telling us about advances in cybernetics aiding people to blend fruit with their bare hands.

Despite what I felt to be its shortcomings, The Man with Nine Lives is a wonderfully spooky watch, with lots to enjoy...
Posted by Chris Hewson at 5:23 AM