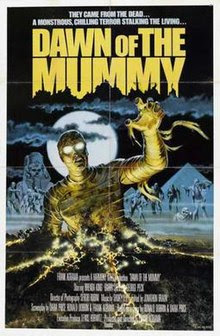 Lucio Fulci's Zombi 2 had a lot of imitators and unofficial sequels, and one such imitator was Frank Agrama's 1981 horror film, Dawn of the Mummy...

The movie starts off in Egypt, in the year 3000, with a monologuing Egyptian high priestess (Laila Nasr), who talks about a ruler, Sacraman (I'm not sure on the spelling, I've typed it up phonetically), while her cronies bury him and his treasures. She puts a curse on the tomb, so that if anyone disturbs it, Sacraman wil rise from the dead and kill them...

The film cuts to 'present day', with a trio of grave robbers breaking into Sacraman's tomb. The leader tells them not to enter until the next day, because only then will the poison gas in the tomb disperse. Hassling the trio is Zena (Laila Nasr), an old woman who warns them of the curse.

Two of the thieves guard the tomb while the leader (George Peck) leaves for the day, and Zena finds three locals and tells them what's happened. They go to the tomb and find the thieves asleep (and right at the tomb's opening! Do you dipshits want to die from the gas?!). The locals go into the tomb and choke on the gas, and eventually start bleeding from the mouth...or have been attacked by something, I'm not sure, since the scene ends abruptly, with the long overdue title card, at eight minutes into the film! 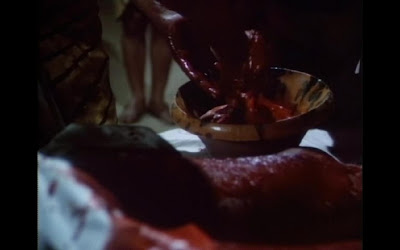 The film cuts to New York, 'present day' (WE KNOW! YOU TOLD US ALREADY!). After the opening credits (and a cool theme), a group of fashion models go to Egypt for a shoot. The models drive away from the pyramids and into the desert, and meanwhile, the thieves are in the tomb, searching for the treasure of Sacraman. 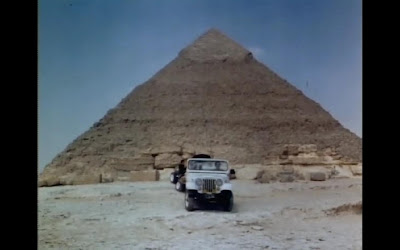 While the models do their shoot (lamenting that they didn't just shoot in front of the pyramids. Well why didn't you? Why else would you have gone to EGYPT for a fashion shoot? If you wanted to shoot pics of a desert, you could have just driven out to California!), the thieves blow open the tomb's side doors in a bid to find the treasure. 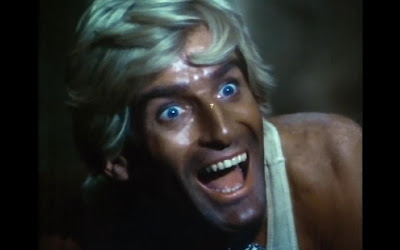 One of the robbers sees the fashion group and starts shooting at them. He's stopped by the angry leader, who tells the fashion group that the shooting was a mistake, as the guy thought they were bandits. Even though they've just been shot at, and warned away, the fashion guys suddenly see the tomb and happily intrude inside, like nothing's the matter! (and no, the severed head they found has stopped bothering them, and is never mentioned again). 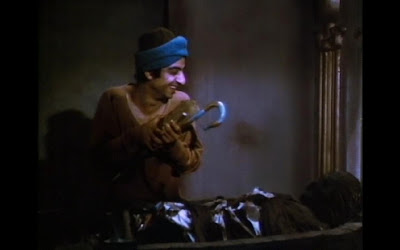 They set up for their photoshoot, and the thieves decide to grin and bear it until the fashion gang leave. They set up spotlights in Sacraman's burial chamber, but they go out when Thief Leader (Rick-he's never named until seventy whole minutes into the film!) cuts the power cord (dumbass! Does he have a death wish or something?!). Everyone just assumes that the battery's gone flat, and the cord-cutting is never mentioned again. 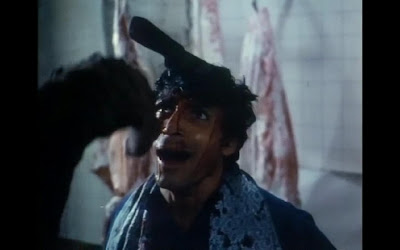 When the fashion gang leave for the day, Sacraman rises, as does his mumombie army...

Things start to get bloody when one fashion girl, Melinda (Ellen Faison) goes swimming at an oasis and is dragged into the sand by a mumombie and ripped to shreds. Later, two others go into town and talk with a local who's going to get married later that night. 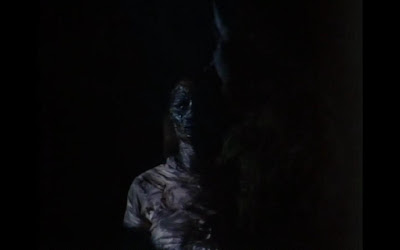 The wedding soon starts, and the carnage of the mumombies begins...

So, how was Dawn of the Mummy? It was a fun zombie movie with a very cool climax! As for the first hour though? It wasn't boring, but pretty slow-moving, and there aren't quite enough scary/eerie moments all round. The final thirty minutes are just great though! A full on Egyptian bloodbath massacre!

As for the mummies, they were much better than usual mummies (throw a lit match at them or flush their bandages down a toilet and they're vanquished!). They were indestructible, bloodthirsty, fast, and brutal, poking out eyes, ripping stomachs open, tearing heads off, and biting throats out! And remember that this movie was inspired by Zombi 2? 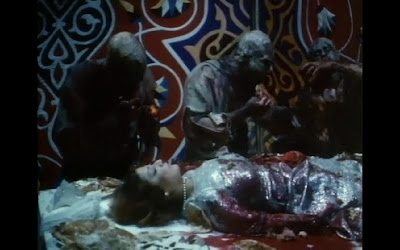 Yeah, anyone who's seen Zombi 2 will recognize where the inspiration for that scene came from!

The characters are pretty dull and one-dimensional, so much so that I only heard one of their names during the entire movie-Melinda. That's it. I only knew them as 'black chick', 'brown wavy haired guy', 'blonde wavy haired guy', 'burned hand chick', and 'crazy guy'! As for 'crazy guy'-Rick Cannon as IMDb calls him-, he overacts like crazy! He laughs maniacly, he has constant crazy eyes, and he inflects his lines with all the 'subtlety' of Tommy Wiseau! Emily(of The Deadly Dolls House of Horror Nonsense)'s review of Dawn of the Mummy describes him in a way that I have to quote!-"Seducing a model is incredibly easy, providing your have dangerously blue eyes and a hyena-like laugh".

The film's ending is really stupid though. The two surviving girls and a guy get a crate of dynamite and lure Sacraman into a trap (where in the hell are the dozens of other zombies?!) and blow him up. They cheer, fist-pump the air, a surviving fashion guy pops out from the woodwork and group-hugs them, and they all walk off happily...and Sacraman's hand rises up behind them.

So, in conclusion, Dawn of the Mummy is a fun horror film, but one with big flaws. If nothing else, it had one rockin' soundtrack!
Posted by Chris Hewson at 8:32 AM