With the X-Men film franchise, it's been the very definition of a mixed bag. There were two great films, though they lacked a lot of stuff from the comics/Animated Series, because they were 'set in the real world' (since everything's trying to be dark, gritty, and realistic, I bet my house that we will never see the Shi'ar in a live-action film!), and then there were two that were lackluster on their own, but one was near sacriligious with what it did to the series! Then, in 2011, X-Men: First Class was made, and it was great! I'm not here to talk about the latest film in the series though, but the earliest! No, not the first movie-earlier, with 1996 TV movie, Generation X...

The movie starts off with a dictionary definition of mutation (and the 2nd definition adresses mutation as an illegal genetic condition! Huh?! That's ridiculous! I'll get into why when I talk about the MRD later), then cuts to two scientist about to slice a mutant's head open. Emma Frost (Finola Hughes) and other colleagues burst in and stop them, but before anything else, the MRD (Mutant Response Division) come onto the scene and arrest the mutant. They also ensure that Russel Tresh (Matt Frewer), the scientist who was about to cut the mutant up, is not arrested. Tresh's superiors fire him when the MRD leave, and Frost, disappointed at the lax response, goes all powers crazy, and the film cuts away... 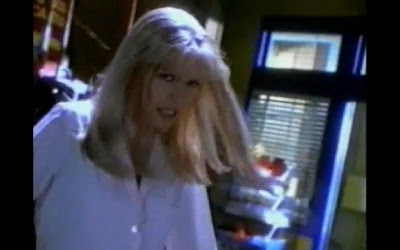 Five years later, teenager Angelo Espinosa (Agustin Rodriguez), a mutant with the ability to stretch his body, is leaving home for the Xavier Institute.

The film cuts to Tresh, whose encounter with Emma Frost apparently unlocked his overacting genes, because he's acting like he was directed by Bruno Mattei! Tresh explains his new 'dream machine' to partner Bob (Kevin McNulty)-it's a machine that allows Tresh to enter anyone's dreams ('dreams are another dimension', Tresh says). Tresh leaves and goes to an arcade, where he acts like a creep. Also at the arcade is Jubilation Lee (Heather McComb), a young mutant who's playing an arcade. Thanks to one of Tresh's mechanisms (or something like that), she inadvertantly starts using her powers-the ability to shoot fireworks out of her hands (and her name's Jubilation. SUBTLE!). She is chased by security guards, and is detained soon after (your powers are useless, Jubilee!). 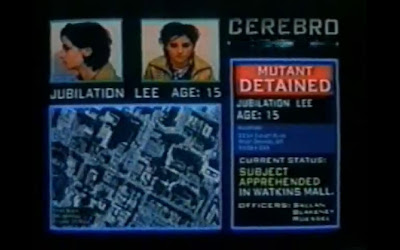 Jubilee is arrested, and Emma Frost finds out about it. Frost, who's slutting it up with her usual low-cut clothing, wakes up Sean Cassidy-Banshee (Jeremy Ratchford), and they leave for the police station Jubilee's being held in. They arrive outside the station and meet Jubilee's mother, who they convince to let them take Jubilee to Xavier's Institute for Gifted Children. Though reluctant (Frost: "We'd like to offer you an alternative to a mutant camp"-Mother: "In what, a stripper's club?"), she agrees, and Emma and Banshee go inside the station. emma uses her psychic powers to convince that she and Banshee are officers Hootie and Blowfish (seriously!) of the MRD. They go to lockup and bail Jubilee out, then head for the Institute. 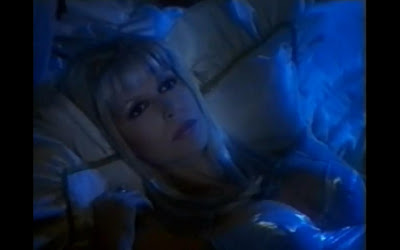 They arrive at the institute, and Jubilee and Angelo meet up with the other students-Kurt-Refrax (Randall Slavin), Monet St. Croix-M (Amarilis), Arlee-Buff (Suzanne Davis), and Mondo (Bumper Robinson). Their powers are, respectively, X-ray vision and light beams, super intelligence and strength, ability to rapidly increase muscle mass, and the ability to absorb anything and take on its properties. 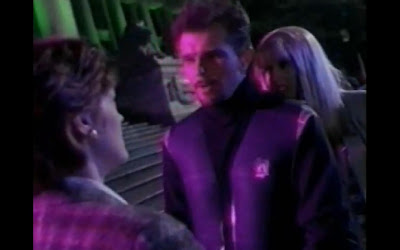 Emma teaches the students about dream travel-the ability to leave your body and go into the dream dimension, where you can do anything

The group go into town, and Angelo sees a girl. The girl sees him looking at her, and smiles, but all her friends think he's a creep and walk off. Angelo later goes into a diner, where the other Gen X teens are, and the girl and her friends are there. One of them invites Angelo over, then pushes his face into a plate of cream. An angry Angelo storms off. (As for the group, their names are Lance, Jeannie and Kayla-readers of the comics will know who they are!). 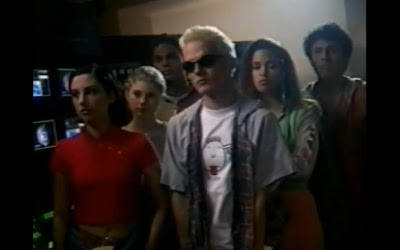 Angelo goes back to the institute and hacks into the mansion's defenses, unlocking a rooom that contains Emma Frost's dream machine. Meanwhile, kooky-as-hell Tresh is at a board meeting, talking about his invention. After he leaves, the board decide that Tresh has gone off the deep end and has to be fired. Bob agrees to let Tresh go, then the film gets mind-fucking, with the whole scene having been Bob's dream of the previous day-Tresh walks in as the room goes all dreamlike. Bob apologizes for firing him, and Tresh happily leads Bob to a flock of birds...which sends Bob plummeting out of a building in the real world.

Jubilee and Angelo test out the dream machine, with Jubilee going in first. She goes into her father's dream, and seconds later, Tresh appears, and after he acts psycho-kooky, Jubilee wakes up. Angelo goes into the machine, despite Jubilee's warning, and goes in. Tresh appears immediately and starts talking with Angelo about stuff. Then, in the real world, police have come to arrest Tresh, and they remove him from his dream machine, which cuts his mind from his body, stranding him in the dream world. 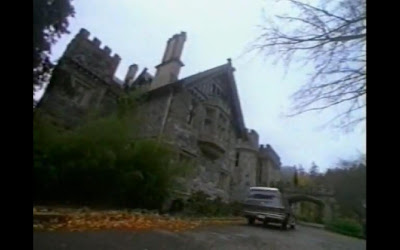 Angelo wakes up, and he and Jubilee talk about their experience in the dream-world, Jubilee lets out an 'f-bomb', then keeps going ("Cosmically, I shit my fucking pants!") which is hella surprising, given this is a kid's movie! (more on this movie's ballsiness later). Later that night, the students go to a fun-fair, and some use their powers for the contests (and it was here where I remembered that I was watching an X-MEN film!). Angelo meets up with Kayla (Silverfox?) again, and they start talking. 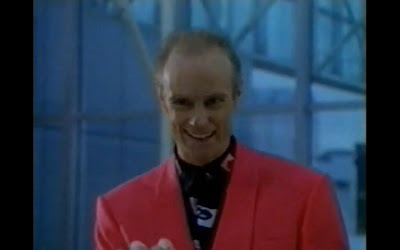 Later, Angelo falls asleep and is met by Tresh, who asks Angelo to go to Tresh's body at the nearby minimum security hospital and attach the dream machine to Tresh. Angelo refuses, as it's too diifficult a task, and Tresh gets angry, and threatens to haunt Angelo's dreams forever, and mind-rape (he uses those exact words! This is a kids film?!) Angelo's little sister! Stuck between a rock and a hard place, Angelo agrees to get Tresh back into the real world...

Generation X is a fun movie, but it's barely an X-Men movie! The characters barely use their powers (Jubilee uses her powers only twice in the whole movie, and both moments are about eighty minutes apart!), and the movie's plot and villain are both different to anything in X-Men mythos (or at least, the villain is, I'm not entirely sure about the dreamscape stuff). There's also a distinct lack of action scenes through nearly all of the movie! 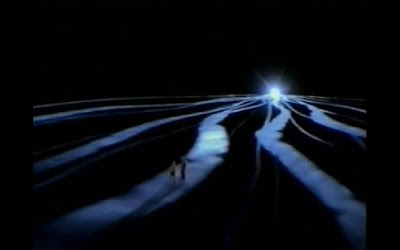 They are only really involved in the first twenty minutes of the movie, but I still want to vent my thoughts on the MRD. I find the concept of the MRD way too damn stupid and unrealistic! The MRD are a government division who go around town, finding mutants and arresting them for being mutants, and putting them into prisons (or 'camps' as this movie calls them). Something that fascistic happening in the modern day is just too big of a stretch on suspension of disbelief!

Generation X is ballsy for a kid's film!  There are racial slurs, threats of mind-rape (with those exact words), murder, and swearing at one point (which is actually more how teens talk, as opposed to 'gosh' or 'darn')! And there's one line from Emma Frost that'd get a teacher fired if they said it nowadays-Kurt: "How are we supposed to relax and concentrate at the same time?"-Emma: "Make believe you're playing with yourself"!. 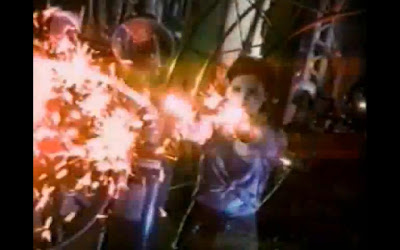 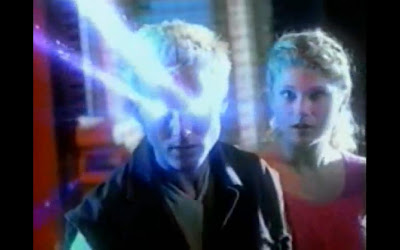 The acting is all decent (Banshee actually has an Irish accent in this movie, as he does in the comics and Animated Series!), though there are a couple of moments when Suzanne Davis' (Arlee) and Finola Hughes' (Emma Frost) acting do falter at times. The standout is Matt Frewer as Russel Tresh, who is either the best actor in the film, or the worst! The former Max Headroom actor is balls-out insane in this movie! Tresh overacts like crazy, has mood swings-he acts all intense, then is very cheerful and agreeable, he wears very colourful clothes (the kind that'd make a fashion designer stab their eyeballs out), and he puts on lipstick randomly at one point! (when in the dream world, he reminded me of Bender, from X-Men: The Animated Series-Beyond Good and Evil).

I would talk about the characters, but I know next to nothing about the comics' Banshee, Skin, M, Mondo, etc., so I'll just skip that. I do know that a few of the Gen X teens are original to the film, like Refrax and Buff (who was originally meant to be Husk, but it would have cost too much to do her powers).

Considering that this was a low-budget TV movie, the effects are pretty good, but not used all that often. There are times when the movie feels very stagey though, but that's not too much of a negatve. What's strange about the film is the weird lighting in some scenes. When Banshe and Emma are talking to Jubilee's mother, the scene is bathed in a purple glow. And there are similar scenes all throughout!

All in all, Generation X, while not perfect by any means, is still an ok film.
Posted by Chris Hewson at 5:35 AM