1985's Demons (my review of which is here) was a huge hit back in the day, which not only paved the way for several unofficial sequels, but also a proper sequel, Demons 2.

Demons 2 centres on a demon outbreak in an apartment building. Yeah, that's it. These movie's sure had simplistic plots!

Opening with a naration talking about the events of the first, and that Demons are now public knowledge, the movie starts off with a horror-tease scene involving a kife and dripping jam. One resident, Sally (Coralina Cataldi-Tassoni), is having a birthday party, and heaps of people have been invited over.

George (David Edwin Knight) is another resident of the high-rise (with the exact same name as the last movie's protagonist-lazy, movie!), and he goes inside to his pregnant wife, Hannah (Nancy Brilli). Meanwhile, upstairs is a gym run by Hank (Bobby Rhodes).

Playing on Sally's TV is a documentary/dramatisation thing about the Demon incident. The whole area surrounding the Metropol (I guess, it's never mentioned in this movie) is walled off, and the documentary voice-over stops, showing the dramatisation of a group of teens who decide to go into 'The Forbidden Zone'. 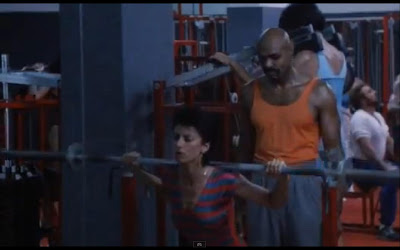 While those dumbasses find a demon claw, back in reality, Sally's party is going full swing, until one partygoer answers the ringing phone and accidentally calls up Sally's ex-boyfriend. Sally goes into full bitch-mode over this and storms off to her room after telling everyone to leave. The partygoers keep partying, and Sally watches the demons docudrama. 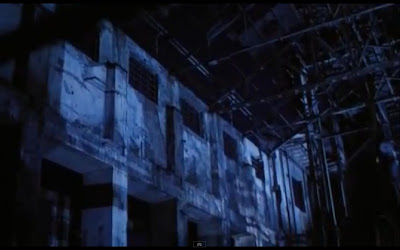 One of the dumb teens accidentally cuts themselves on a wall, and after a creeepy mirror shot, the group find the body of a demon. One decides to snap a picture of the demon and gets everyone in a group shot by the corpse...and the dumbass who was cut bleeds out all over the demon! If my hand was cut and I didn't have any bandages/band-aids or anything (which this group should have, since they're conducting a scientific expedition. And into a place called THE FORBIDDEN ZONE no less!), I'd at least hold the cut, rather than let it drip everywhere without abandon! So the blood drips onto the demon, and he comes back to life, with an appetite for murder... 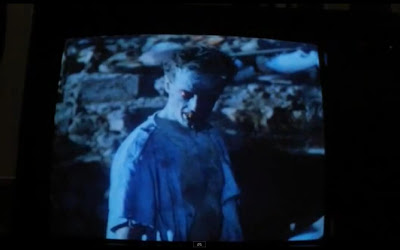 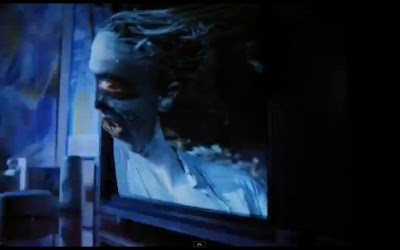 The demons kills one of the dumb teens, but instead of chasing the fleeing group, it focuses on outside the TV screen. After staring at the screen for a little while, he makes his way closer and closer until he's literally coming out of the TV! Sally screams her head off and does nothing but shriek and flail around, trying to open her door in the way that only dumb horror movie characters do (i.e. not at all). TURN OFF THE TV, YOU DUMBASS! And why can't anybody hear her shrieking?! The music isn't that loud! The demon comes out completely and attacks Sally. 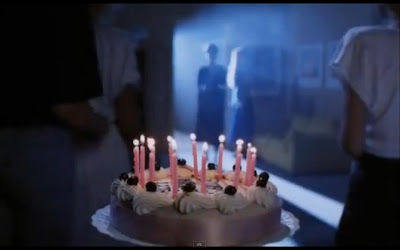 Everyone readies Sally's birthday cake, and Sally stumbles out of her room (the other demon vanished out of plot convenience, I guess). She slowly makes her way to the cake, then as she's about to blow out the candles, she starts the demon transformation-fingernails and teeth falling off/out and replaced by the demonic replacements!

Demon-Sally attacks and scratches all the partygoers (which is all these demons need to do to infect you), and after a quick, funny (darkly so) interlude with Sally's parents, the movie cuts to George and Hannah. Hannah decides to go to the party and see how everything's going, in a scene that'll make anyone who's seen Anthrophagus cringe! She knocks on Sally's door, and when she gets no response, she leaves. 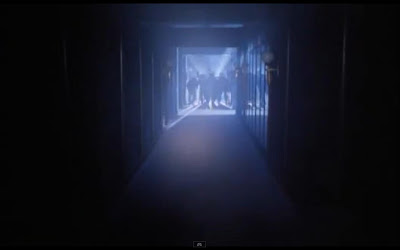 A mass demon-transformation happens in Sally's, and Demon-Sally starts gushing acidic blood, which burns through the floors below. Just when I was wondering where Bobby Rhodes had gotten to, the blood starts dripping into the gym. The blood melts down into heaps of places, and infects whoever touches it, namely a dog, in a scene that is NOT for animal lovers! 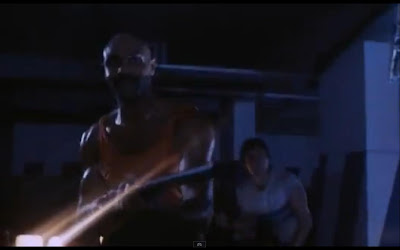 As for this building, it's the most needlessly over-protective apartment building ever! If the power goes out, you can't open your windows, the windows are bulletproof, and the main doors are barred! (and carproof!). 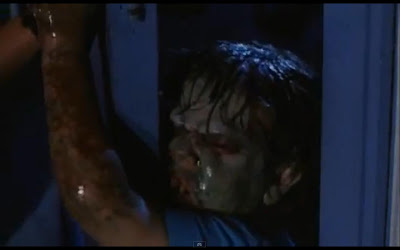 The demons get into the gym, and everyone there fights back. They then all run out to the barred main doors, and Hank does something very stupid-in an effort to try and destroy the bars, he throws...a vase at them! Sure, it's a big, heavy vase, but it'd be useless against metal. It'd make a much better weapon against a demon! 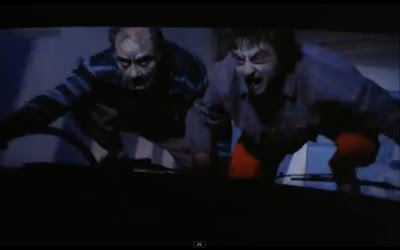 Everyone goes down to the garage, save for George and a woman, who are trapped in an elevator. After a failed escape attempt, the woman is scratched... And down in the garage, everyone's preparing for war...

Demons 2, while not as good as the first movie, is still a fun horror flick! it's tense, full of gore, and like the first movie, it's set in a small (well, it's small if you're locked in with a horde of scratch-infecting demons!)  location that gives the movie a claustrophobic feel.

There are heaps of cool scenes throughout, from the demon coming out of the TV, to the scene in the elevator when the woman turns into a demon, the demon-kid's attack on Hannah (even if it is abruptly finished-more on that later), and lots more.

Speaking of the demon coming out of the TV, HOW IN THE HELL DID THAT HAPPEN?! It's never explained how that happens, and while the lack of plot worked for Demons, here I was just wondering what the hell was happening. There's more stuff at the end involving TV's, and it's just as confusing (it's still a cool end though). 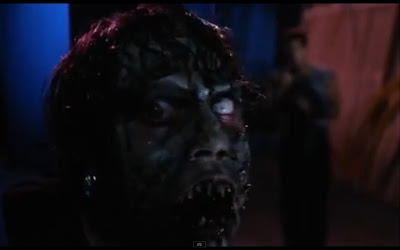 A weird scene is when the demon-kid's attacking Hannah. She's about to attack him when he suddenly collapses and a weird frog-gremlin burst out of his chest and attacks Hannah. HUH?!

There are a few strange things about the scenes in the garage. How did everyone turn on the headlights of the cars around them? How are they driving the cars? How did they set one on fire? Where did they get a gun and alcohol for molotov cocktails from? And most importantly, if they could start the cars up so easily, WHY DIDN'T THEY MOW ALL THE DEMONS DOWN AT THE END?!

Probably the worst scene is the garage attack. There are dozens of people in this garage, and they've got a gun, several molotov cocktails, and countless melee weapons!...And when all the demons attack, the people do terribly! Hank keeps firing and missing, no-one uses the BOMBS they've got, and everyone pretty much hit the demons with as little force as possible, and are overpowered...and they all die, including Bobby Rhodes, who gets the worst death any guy could get!

There's also a totally pointless subplot midway through the movie. At the start of the movie, a nerdy guy picks up Sally's ringing phone and accidentally invites Sally's ex-boyfriend Jacob (or something, it's never made clear) up. After Sally goes off, one of her friends sends the nerdy guy out to wait for Jacob until he arrives and tell him that Sally's not there anymore. And come midway into the film and beyond, he's still waiting! Jacob sure took his time to get to the party!

Jacob and his buddies (basically a toned down version of the punks in Demons) are driving around the city. Also in the city are the little boy(who turns into a demon)'s parents, worrying about him because he's home alone and won't answer their calls. They drive to the apartment speedily, as does Jacob, and they end up crashing into each-other, and nerdy guy helps everyone out and gets them into an ambulance. That's it, they're never seen or mentioned again! And while all that might not seem like much, since it's spread over half-an-hour, it feels longer, and doubly more pointless! Something else strange is two characters near the end who turn into demons, even though they weren't scratched recently. If they had, they'd have been demons long ago.

The acting's decent, but I can't really tell how good most of it is, because the movie's dubbed. As for the dubbing, yeah, it's bad!

Asia Argento, Dario's daughter has a minor role in the film, and things don't turn out so hot for her. She's in the garage when the massacre goes down, the demons go over to her...and we never see her again. I guess Dario didn't want to film a death scene with his eleven year old daughter-who knows.

The effects are great! The gore is all awesome (though not as plentiful as Demons) and the look of the demons is cool as always, and the weird gremlin thingie looks good. There's one hilariously bad effect near the movie's end though. A demon is tossed from the apartment's roof, and an obvious mannequin is falling!

Just like the first movie, the soundtrack is uber cool, full of new-wave (so Wikipedia tells me-I probably couldn't recognize new-wave music if I heard it) music! There aren't as many songs though, only a couple (including The Lovely Rockets-Kundalini Express), and the rest of the soundtrack is very good!

So in closing, Demons 2 is a fun sequel that's well worth a watch for fans of Demons, and horror fans in general.
Posted by Chris Hewson at 4:53 AM