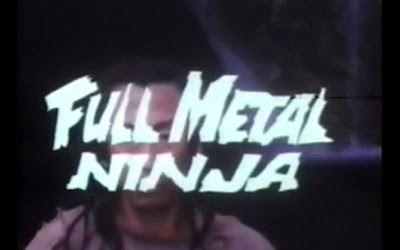 Well back I am with a Godfrey Ho-Pierre Kirby film! And this time it's just the IFD footage again, rather than the Movie A stitched to it. Except, this time the whole movie(s) of Full Metal Ninja is on Youtube...And I'm not going to watch it again. Quick explanation-Full Metal Ninja is BORING! That is to say, all footage other than the IFD stuff is, so I'll just review that, because Pierre Kirby is the unsung action hero of the 80's, not some random, drowsening chopsocky film! Full Metal Ninja is about Leon, a pink ninja who walks around the forest aimlessly, beating the crap out of evil ninjas!

The movie starts with a fleuro-yellow ninja being chased by evil protection-racket ninjas, employed by a guy named Boris. They get the attention of pink badass Leon (Pierre Kirby!), who makes short work of the ninjas, especiallly thanks to his old-timey pistol, which he takes one charging ninja out with! 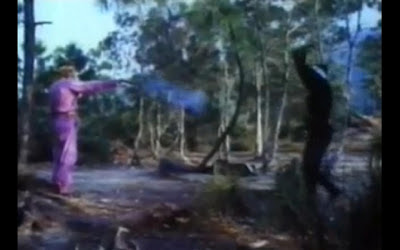 The other ninja runs off, with Leon's message to Boris ("Tell him the judge is here!"). The ninja goes to Boris (Jean Paul) and Luthor (Sean Odell), and informs them, nonchalantly that they 'have a little problem-some guy came round and killed one of our men.'. Boris knows who Leon is-years ago, Leon's family owned some land that Boris wanted, so Boris burned their house down, killing them all except for Leon, who survived. He escaped from...wherever, to escape the vengeful Leon. 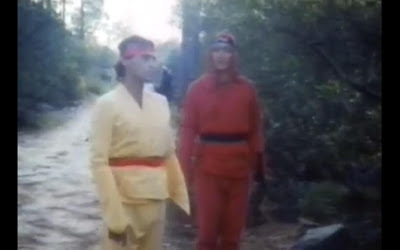 Meanwhile, Pierre Kirby is doing his usual thang that he does in these IFD Ninja movies-walking around a forest, when he's ambushed by Sean Odell and three other ninjas-Odell: "Now prepare to DIE, you're gonna DIE!"-needless to say, after a statement like that, Sean Odell is lucky that Pierre only has one bullet in his gun at a time! So Leon makes short work of all the ninjas, shooting the last one, then he scares Luthor with the gun, and fires..."Bullets are expensive and hard to come by, consider yourself lucky!". Pierre Kirby is so badass, that he only needs one bullet at a time! 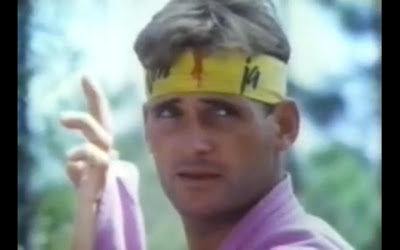 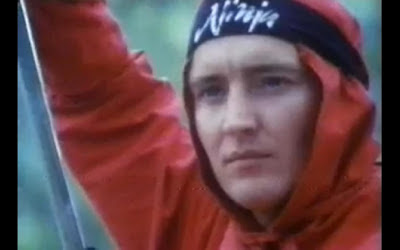 After Luthor and Boris talk, they send two ninjas out to kill Pierre Kirby. They fail, naturally! Soon after, Luthor and two other henchninjas are tracking Leon, and they 'get into position', which you'd think would mean 'they hide in a bush'! But no, it's by teleportation! Ninjas can teleport somehow in these movies! 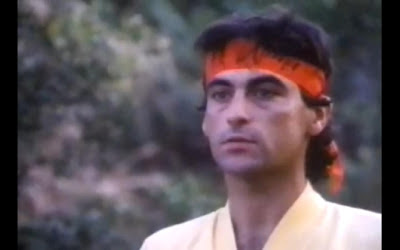 Luthor and co. attack Pierre, and manage to get ahold of his gun, but before Luthor can shoot, Pierre kicks a tree, breaking it in half and sending it crashing towards the evil ninjas! Pierre escapes, but Luthor has the gun!...Which isn't actually a big deal, since it only has a single bullet in it, if that! 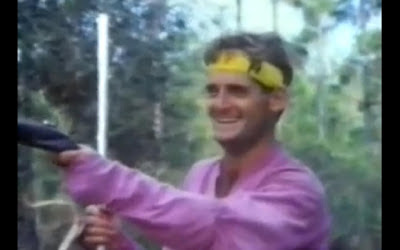 The next scene is one of the usual IFD scenes, where characters from Movie A and Movie B 'talk' to each-other, via Frankenstein film editing, and overdubbbing for Movie A. There have already been a few scene like this in the movie so far, but I'm mentioning this one specifically because of what Leon says! "Our destinies are one. The monk said we must work together to purge the evil forces! So how about it?". Pierre Kirby-Laidback badass! 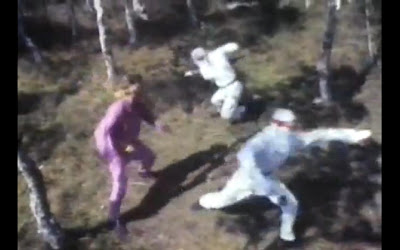 Pierre Kirby does some training, dispatches more henchninjas, and is ready to go after Boris and Luthor and get back his gun...

While lacking in any Sergeant Hartman's, Full Metal Ninja is very cool! Or very uncool, depending on whether you think Pierre Kirby is still badass even when he's wearing bright fluero pink! 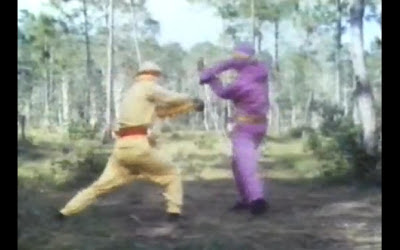 To say FMN's plot isn't the thinnest one ever would be a HUGE embellishment! Its plot is this-Pierre Kirby is a good ninja. There are evil ninjas around. Pierre Kirby must kill them. He does. That's all there is, and all the better for it! After all, it's only a sixteen minute film, a complicated plot would be ridiculous! 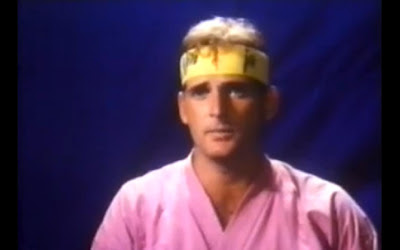 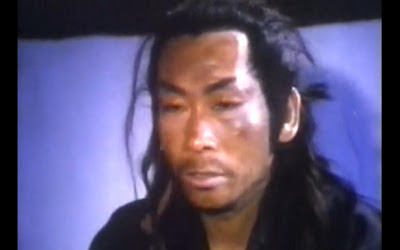 Those two are totally in the same room!

There's actually some really good camera work in Full Metal Ninja, which is cool! There are the usual IFD staples present, like the multicoloured ninjas! Pink. Yellow. Red. Truly these are the colours of the stealthy ninja assassins!

The acting is all good. Pierre Kirby is a super-cool action god, and Sean Odell is fun as the secondary villain. Jean Paul is decent, but gets barely any screen time.

That's about all I can say about a fifteen minute film, so, watch it for Pierre Kirby, and regular IFD madness!...
Posted by Chris Hewson at 8:10 AM