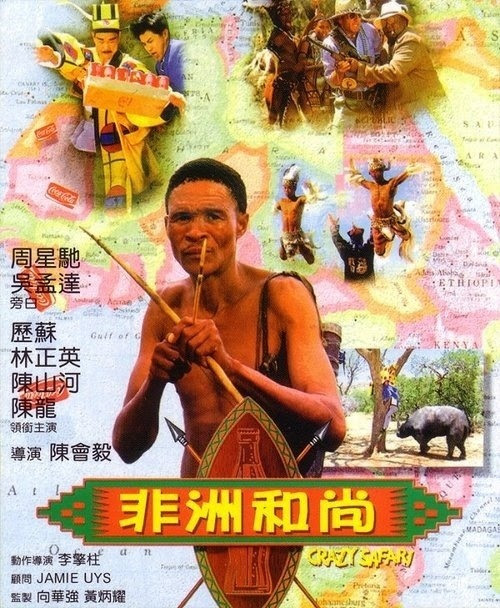 For those not in the know, The Gods Must be Crazy is a well-known 1980 South African comedy about a bushman named Xi[xo] (N!xau), and misadventures of other people in the wilderness, and one that got an equally cool sequel a few years later. And it's beyond that point in the series where I guess most fans of the first two have no idea about. You see, not only does TGMBC have THREE more sequels after 2, but they're crazy! These three movies were all Hong Kong productions, and surprisingly, they all starred N!xau himself! The Gods Must Be Crazy 3 is about N!xau and his tribe coming across a hopping vampire, and a Cinese wizard has to get it back! I'm not lying!

The movie starts off with some stock safari footage (or, considering where this was shot, maybe actual footage for this movie), scored to a nifty theme, then cuts to an auction, somewhere. Two guys, Kid (Sam Christopher Chow) and Master (Lam Ching Ying), one of whom is a wizard (um...yeah), are there to buy the body of Kid's vampire ancestor. Before the bidding, the auctioneer tells the bidders the difference between European vampires and Eastern ones (in a way that sounds like the existence of vampires has been discovered in the Gods Must be Crazy universe!) and shows them a video slideshow. The bidding for the body then starts. 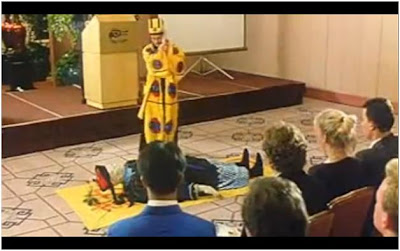 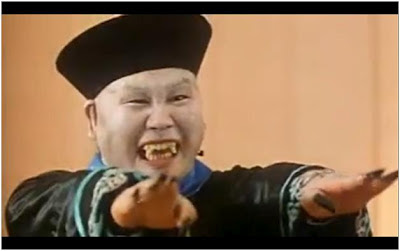 After a bidding battle, Kid has lost, and begs the winner to give him the body, as it's his ancestor. The man refuses, unless Kid can bring the body back to life. Master suddenly gets into wizard gear and starts performing a ritual to the body (crazy auction!). The vampire comes to life, and Master pins a yellow note to its forehead (one of the things that can stop a Chinese vampire), and he and Kid leave, with the vampire following them (apparently Chinese vampires are like dogs-ring a bell and they follow!). 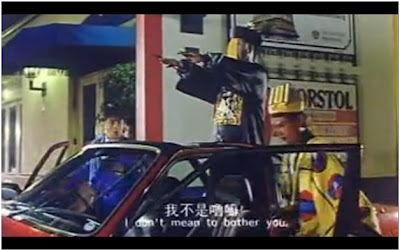 After some misadventures in the streets of wherever they are, the film cuts to Africa, where N!xau has come across a couple of slave traders. Meanwhile, up in the air, Kid and Master are flying to Hong Kong, but with a broken compass, and they end up in Africa. Low on fuel, they need to dump things, and they dump cases of coke bottles (of course!), which land below onto the slave traders, who get knocked out. Up in the air, the plane's still going to crash, and the pilot holds the two 'heroes' at gunpoint, saying that there are only two parachutes, and he's taking one. 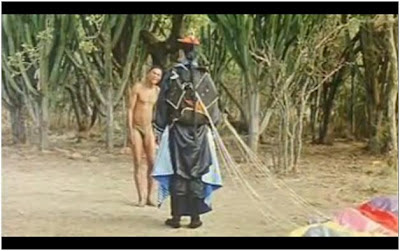 The pilot jumps out of the plane, but Master had switched his parachute with a knapsack, and the pilot falls to his death (mean comedy!). Master gets a parachute on, and Kid is an idiot who cares more for his undead ancestor than he does himself, as he puts the last parachute on ancestor! 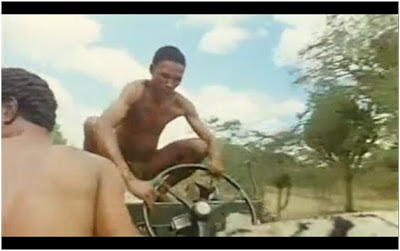 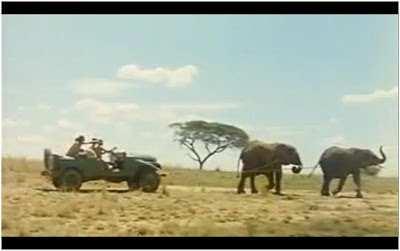 The vampire lands down by N!xau and the slave traders, and once N takes the pinned post-it-note from the vamp's head, it beats the crap out of the slavers, and the bells the slaves have attracts the vampire to their village. 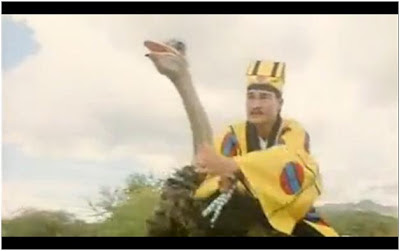 N!xau figures the vampire out and pins the note back to its forehead and tests the bells, to see their effect on it. Also in the village is a lady slave trader, who, after being knocked out, was taken in by N!xau's tribe to heal her. While there, she notices the presence of diamonds nearby, and she runs off. 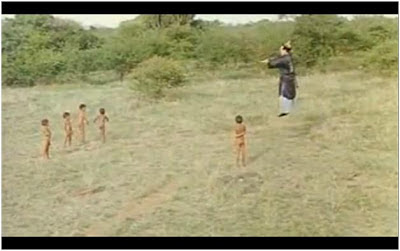 Kid and Master have various misadventures across the country (including emu hang-gliding!) until they eventually come across N!xau's village. After a whole bunch of things happen in the village, the duo eventually find the body of Ancestor (yeah, that's what he's always called, never by name, just like Kid and Master!), which was kept in the village, and they start to leave, but things turn bad when N!xau's village is attacked by the slave traders-who are looking for the diamonds-who have an African vampire in tow!... 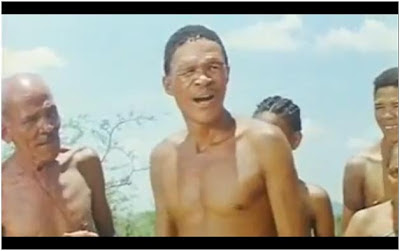 And the continent-vs-continent vampire duel isn't even the crazest bit about the film's climax!

The Gods Must Be Crazy 3 is not only a fun movie, but surprisingly enough, for a film packed with hopping vampires, wizards, African Hulk (as in SMASH!) vampires, and channeling the spirit of a dead monkey to beat up a witchdoctor, Crazy Safari actually feels like a Gods Must Be Crazy film! 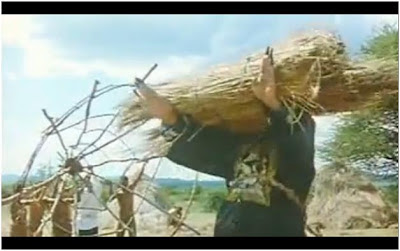 As a sequel though, it doesn't stand up, as it isn't as funny as the first two movies. On its own though, TGMBC-3 is a heap of fun! Who would have ever thought that there'd be a movie where N!xau and his tribe come across a Chinese bunny vampire! The ending is blissfully insane as well! How are the evil slavers defeated, you ask? Simple!-The wizard resurrects the spirit of Bruce Lee and puts it in N!xau's body, and he beats the crap out of all of the bad guys!

One of the funniest things about the movie is the Engrish subtitles! Most are fine English, but some, well...-"Does it worth taking me to bringing him all the way to Hong Kong?"-"Stop talking or your skin peeling off your tongue."-"I'm just hurry to find my ancestor."-"How can I let them jeopardizing your renown?"! 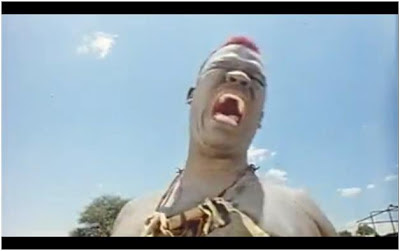 One big problem though is the narration-none of it was subtitled! The only other negative that I can think of is a pretty minor one. After being knocked out by the falling coke bottles, the German slave trader lady is taken back to N!xau's tribe for recuperation. After she wakes, she notices that all the tribes' tools have diamonds stuck in them, and she realizes that the tribe must get heir rock from a diamond mine. She goes off to look for the mines or something...and she vanishes from the movie for over half-an-hour! She ends up reappearing at the climax, but until that point, I thought the movie had just forgotten about her. 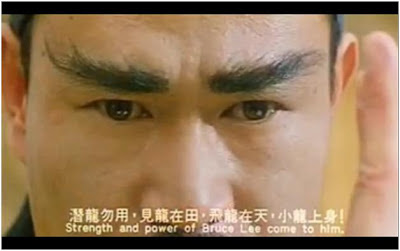 As for The Gods Must Be Crazy 4 and 5, I haven't seen them yet, so I can only imagine what they're about! Maybe they're even crazier than this movie! Maybe 4 is about a bunch of giant monsters attacking Africa, and N!xau, naively unaware of the danger, sees some eggs left behind by one Kaiju and goes on a journey to give them back. After this movie's plot, the possibility of that being TGMBC-4's plot isn't too far of a stretch!
Posted by Chris Hewson at 11:29 PM