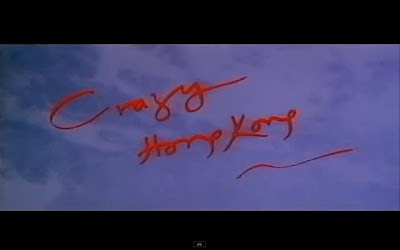 Well here I am with the next Hong Kong The Gods Must Be Crazy sequel, TGMBC-4: Crazy Hong Kong! Time to answer your inevitable question. 'Is this as loopy as Part 3?'. No, it isn't, GMBC-4 is rooted in reality, not the world of vampires and possessions by long-dead martial artists. It's a fish-out-of-water story, which sees N!xau in Hong Kong of all places! 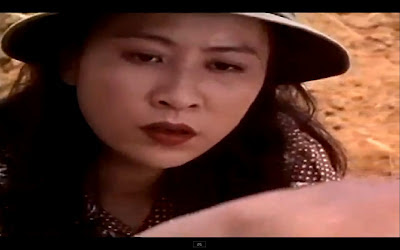 The film starts off with a narration fron N!xau's nephew, with him talking about N!xau and his village. The narration soon ends and N!xau goes hunting. He's eyeing a lion when he sees an a woman (Carina Lau Kar Ling) kitted out in safari gear goes towards it, roaring. After the madness of GMBC-3, it wasn't too strange of a guess for me to think that she was really a lion wearing a Hannibal Lector-style skin suit, but no, it's normal-it's for a commercial being shot.

While on break, the woman, Shirley Huang, becomes friendly with N!xau after accidentally throwing a coke botle (yep, there it is again) at his head. A rich cowboy guy, Jack (Conrad Janis) calls Shirley from L.A., and they talk business. When the call ends, she gives N!xau a gift-her nametag, and her coke bottle with a ceramic (or plastic or something) bird she stuffed inside it. As the shoot continues, N!xau goes back to his village and shows off his prize, and the tribe parties with it all night long.

The next day, the tribe feel that the bird needs to be set free from the bottle, so N!xau leaves to find Shirley, as she's the one who put the bird in, she can probably take it out. N!xau follows tire tracks nearby the ad shoot and tracks them all the way to a plane, and acidentally falls inside a crate and is packed into the plane.


Shirley arrives in Hong Kong, and she goes off to a carpark and meets with John (Ching Wan Lau), a coworker who seems to be missing a few marbles. Back at the plane, two diamond smugglers (who look like Bert and Ernie! One's tall and thin, the other short and stocky!) unpack their crates of diamonds and N!xau pops out. The duo realize that N!xau has (unknowingly) stolen their diamonds, and they chase him through the streets of Hong Kong. 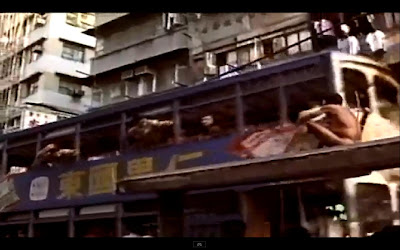 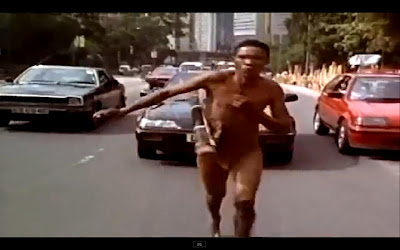 After losing is pursuers, N!xau realizes that he's in a strange new place, and he wanders around the city, getting into trouble, eventually being confronted by some cops. They see Shirley's ID card and assume that she's N!xau's girlfriend, and N was just a guy at a fancy dress party who got drunk and wandered around the city. The chief tells the other cops to take N!xau to Shirley.

Shirley recognizes N!xau, who is dumped onto her by cops, claiming that it's her responsibility to look after him.. 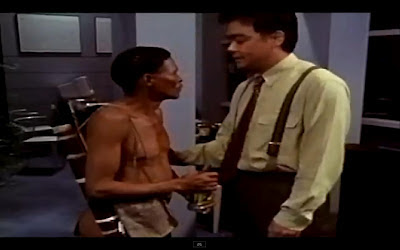 The company Shirley works for is a fast food conglomerate, and it's built thirty-nine fast food outlets all through Hong Kong, but forty is the number they want to reach. There is a fortieth location, and the lease to the building has expired-and living there is Shirley's mother. Shirley leaves to go do stuff, and tells John to take care of N!xau while she's gone. Shirley leaves and N!xau immediately follows her. They go to a clothing store and Shirley buys some clothes for N!xau.

Later, Shirley calls John and instructs him to gets her a cake (holy shit! She must have a heaps higher position if she has the balls to do that!), and she and N!xau go to her apartment. John soon arrives, and Shirley gets pissy when she sees that he got an an ice cream cake not a 'birthday cake'-crazy lady! 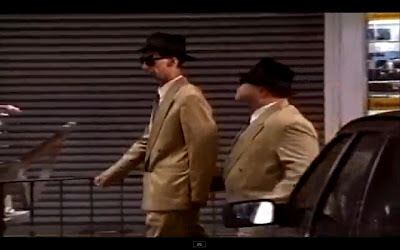 After John leaves, Shirley's mother arrives, and they talk for a bit. Later in the night, Shirley's got a candlelit dinner set up, but her husband doesn't show up. The next day, Shirley comes into work and finds out that her husband has stolen all of the company's money and fled the country with his mistress. 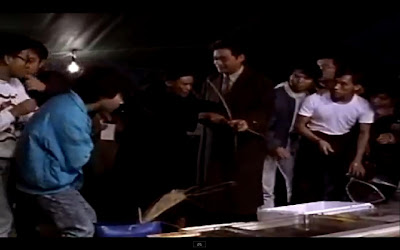 
The next day, not only are things getting worse for Shirley, but the diamond smugglers have caught up with N!xau... 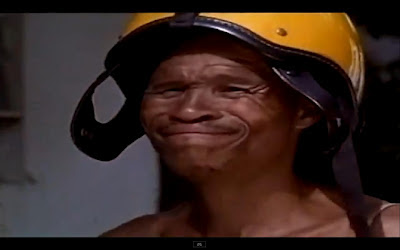 The Gods Must Be Crazy is a fun movie, just like the previous entry, but it's very different! TGMBC-4 isn't set in a crazily supernatural world, but the real one, and as I said before, it's a fish-out-of-water story for N!xau. That was a good move for the series to make, because if I saw another one of these films about some people stuck in the wilderness of Africa, I'd go postal.

Unlike GMBC-3, this is dubbed, and the dubbing is hilariously bad! Especially when people's mouths were barely moving, yet their dub actors were still talking! I did get used to it pretty quickly though.

The film is narrated by N!xau's nephew. I have no idea if this was in the non-dubbed version-it doesn't really seem like it, but maybe it is. The narrator is ok, but he tends to get weird sometimes though, and sounds crazy!

As for the characters, they're especially fun, namely John, the loopy, forgetful guy who I think has a crush on Shirley. John seems to have an Addams family-Cousin Itt deal with N!xau-he understand N!xau perfectly most of the time. Among other things, John's also part of an unexpected and awesome ending!

There is one really weird scene near the end though. When N!xau presents the bottle with the fake bird to Shiley, she smashes it and 'sets the bird free'. N!xau picks the fake bird up...and becomes real! What the what?!...Wait, why am I questioning this?! I've seen N!xau be possessed by Bruce Lee and fight cross-continental vampires, and it's a ceramic bird coming to life that I question?! 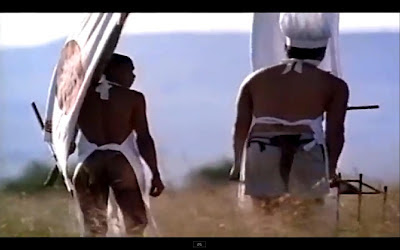 So in closing, for fan's of this series, and for comedy fans in general, I recommend this movie.
Posted by Chris Hewson at 9:10 AM