Charles Band's B-Movie film company Full Moon Entertainment (or F M Direct, or F M Features, or F M Studios, or F M Pictures) was the successor to Band's earlier company, Empire Films. Empire was responsible for movies like Trancers, Re-Animator, From Beyond, Ghoulies, Sorority Babes in the Slimeball Bowl-O-Rama, and many more until its bankruptcy in 1989.

The movie starts off quickly, with Sergeant "The Sarge" Stone (Tim Thomerson), Mittens (Art LaFleur) and Joey (Timothy Van Patten), and several others camping. Mittens and Sarge both notice that their compasses are wonky. Then, Charles Dolan (Biff Manard), a war journalist arrives at the camp, hoping for a good story.

Instead of Sarge, a young liuetenant is in charge, and he proves himself a dumbass when he hears marching, asumes its US soldiers, and walks straight in front of a squad of nazis and is killed. The nazis ambush the base and most of the squad are killed. Sarge, Joey, Mittens and Dolan manage to dispatch the squad, but they're the only survivors 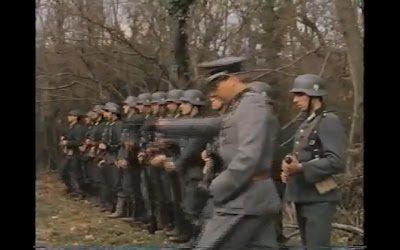 While the four are camping, Joey is on watch ,and he sees a mysterious alien figure. He runs back to camp and thinks that he's going crazy, but is reasurred by Dolan that he probably just saw an animal. 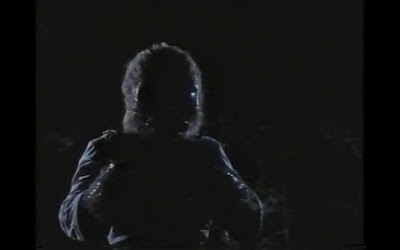 Come morning, Sarge is sleeping and Mittens mentions having seen a deer, and Dolan thinks they should find and hunt it for food. Mittens and Joey are reluctant, but Dolan talks Mittens into coming. They find where the deer was, then follow its trail, which leads them straight to an S.S. camp.

While Dolan sneaks down to the apparently abandoned camp, Sarge wakes up, and is infuriated that Mittens and Dolan have gone off hunting when they're behind enemy lines. He and Joey go off to find them and end up finding something completely unexpected-a spaceship... 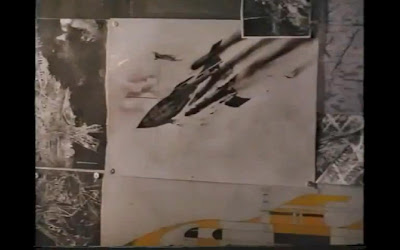 Meanwhile, while avoiding nazi soldiers, Dolan goes into a tent and finds several photos and documents of a strange ship. A nazi then bursts in and is about to alert everyone else in the camp, but is dispatched by Mittens. 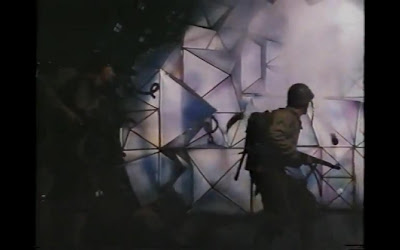 Sarge and Joey go inside the crashed spaceship and look around, eventually finding the cockpit (sort-of), containing a dead alien pilot. Thomerson looks up the ship's periscope and sees a mass of nazis approching the ship. He waits a little while for the trops to disperse, then he and Joey leave via a vent, toss a grenade in the ship, and hightail it outta there as the ship blows right up. 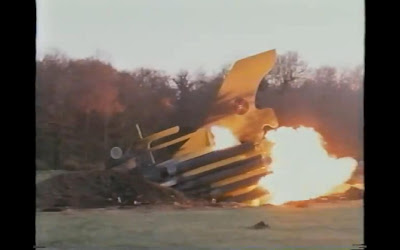 Meanwhile, Dolan and Mittens are being interrogated by the nazis, who are also keping an alien prisoner-the one Joe saw earlier. Not long after, a certain notorious German with a 'certain type of moustache' arrives...and is decked by Mittens! "Pinch me, Dolan-did I just KO Hitler?!"-Yes Mittens, you sure did! 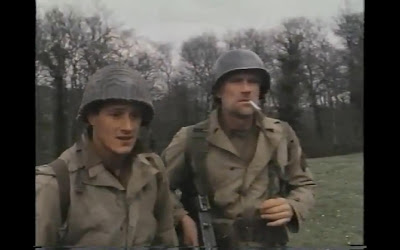 Mittens and Dolan are thrown in cages, and a little while later, Sarge and Joey arrive to rescue them as well as the alien. They manage to escape, and soon after, the alien calls its friends over...

Zone Troopers is one hella fun movie! It's full of fun action (as well as goofy music during a few action scenes), cool actors, and a very entertaining plot. Tim Thomerson owns the show as The Sarge, and everyone else is just as good. There are also cool special effects. 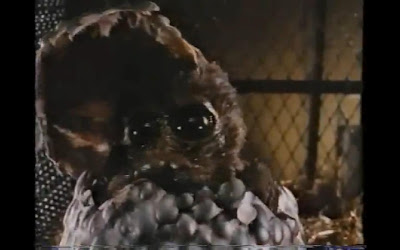 The film's soundtrack is cool as well. The opening and ending credits are set to Glen Miller's In the Mood, and there are the aforementioned goofy music bits in some action scenes.

There were a couple of things I didn't get though. At the end, when the alien spaceship is about to leave, the group see the words 'Kilroy was here' written on it-who was Kilroy? It wasn't any of the main characters names! Also, SPOILER WARNING!
At the end, there's a military person seen and approached by Dolan and Mittens, and I have no idea who it is, I think it's the prior killed Sarge, and while he does say something, we never see him closely, or out of shadow, and he can't be heard very well. 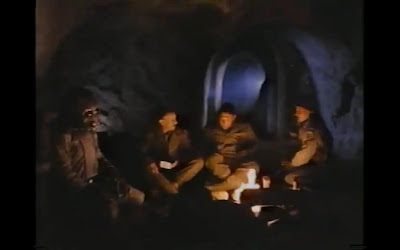 So, do I recommend Zone Troopers? Hell yeah! It's a super-cool actioner that's well worth a watch by fans of the genre...
Posted by Chris Hewson at 3:37 AM