Geek Maggot Bingo, or the Freak from Suckweasel Mountain (1983) 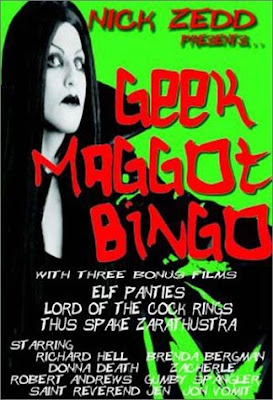 "If you cut a face lengthwise, urinate on it, and trample on it with straw sandals, it is said that the skin will come off. This was heard by the priest Gyojako when he was in Kyoto. It is information to be treasured.".

'HUH?!' will be a common thought for anyone who's game enough to watch Nick Zed's Geek Maggot Bingo, a weird-as-hell horror film about a mad scientist, Dr. Frankenberry, who's trying to create life, and standing in his way are a group of vampires, and The Rawhide Kid!

Geek Maggot Bingo, or the Freak from Suckweasel Mountain (what a title!) starts off with well-known horror host John Zacherle, who acts like he took the same overacting juice Mario Van Peebles and Bruce Payne took for their respective Highlander films! He talks about the upcoming movie, and laughs. A lot. 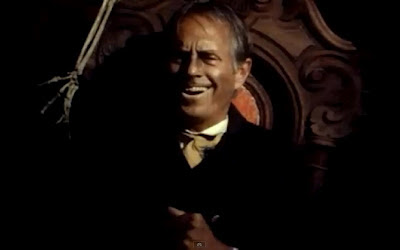 The movie starts with Dr Frankenberry (yeah, that's really his name!) (Robert Andrews) being fired from a university for insane experiments involving corpses. Frankenberry tries to dissuade his boss from firing him by showing him proof that life can exist after death-by bringing a spraypainted cat out of a bag (um...yeah). It doesn't convince his boss, and Frankenberry is fired. 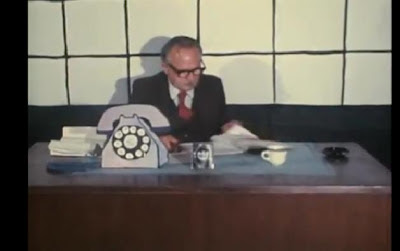 Some time later, hunchback Geeko (Bruno Zeus) is down in the dumps, until he sees an ad in the newspaper-"Wanted: Lab assistant to help mad scientist create life from dead bodies". He goes over to Dr. Frankenberry's cardboard cut-out castle, and Frankenberry hires him ("I've noticed in your resume that you have an extensive arrest record for murder and assault. This is good!"). He instructs Geeko to dress up as a prostitute (um...yeah) and murder people, so Frankenberry can have body parts for his experiments. 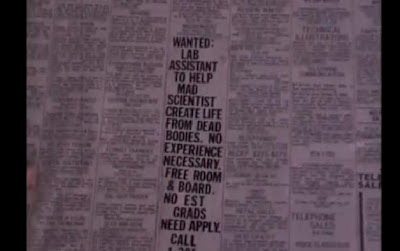 While Geeko lures a guy off the streets and axes him up, Frankenberry's daughter, Buffy (Brenda Bergman) is worried about her father. Later, Buffy's lover Flavian (Gumby Sangler) comes over, and the two have sex until Flavian sees Geeko spying on them, and he runs off into the night. He bumps into a vampire, Scumbalina (Donna Death) and is bitten. 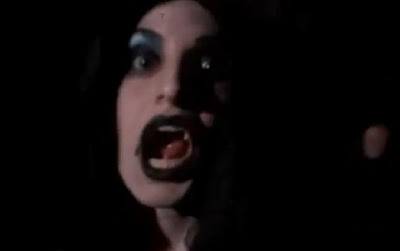 Dr. Frankenberry tries to convince his skeptical daughter to help him stitch up the body parts he plans on reanimating. She agrees, but faints once she sees...something. She is taken to her room, where a bat flies up to. The bat morphs into vampire-Flavian and bites her. Frankenberry burst in and forces Flavian out of the castle with a cross, then sends Geeko out to kill the vampire. 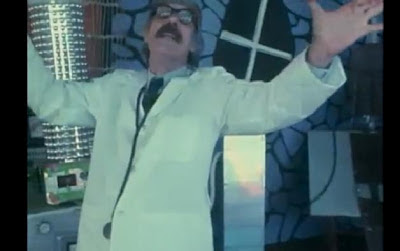 Geeko leaves the castle and is attacked by Scumbalina and bitten. Now under her control, she instructs Geeko to spy on Dr. Frankenberry for her. When Geeko comes back to the castle, Frankenberry tells him of his plan to make a 'formaldehyde man' to counter the vampires. 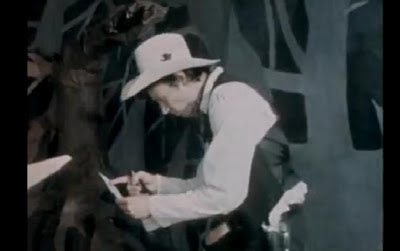 The two set out to look for another person to use for their experiment, and they find The Rawhide Kid (Richard Hell...yeah, THAT Richard Hell!), a cowboy who's walking around the forest, accompanied by the The Good, the Bad, and the Ugly theme. They invite Rawhide back to the castle under the promise of a party, and they booze him up until he's unconscious. 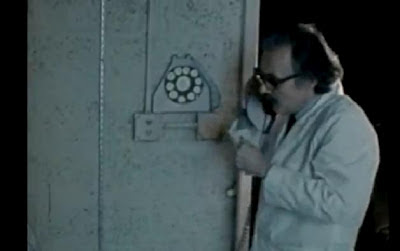 Soon, Buffy is kidnapped by the vampires ("She saved the world. A lot."...yeah, that was the best Buffy the Vampire Slayer reference I could come up with off of the top of my head) and Dr. Frankeberry's monster finally comes to life...

Geek Maggot Bingo (no, that title has nothing to do with the film) is a terrible movie, but a fun one...almost. It's full of drawn-on cardboard wall sets for rooms and Return of the Killer Tomatoes-esque outside shots of buildings (as in, cardboard again), and full of either terrible acting, or massive overacting. Robert Andrews as Dr. Frankenberry constantly talks overdramatically, and is heaps of fun! He also talks with over-the-top, dramatic, and sometimes pretentious dialogue-like his final words: "This labyrinth of pain and fear that we call life, is but a prelude to the cosmic symphony of oblivion, which I call, the anatomy of death!". John Zacherle is also a lot of fun as the film's opening host, but he only has about five minutes of screentime. 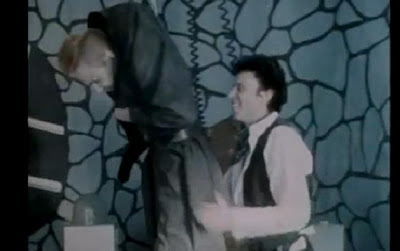 When I say that this movie is almost fun, what I mean is that the film, while not wearing out its welcome, does go on for a bit long (which is saying something, since Geek Maggot Bingo is only 74 minutes long!)

The film has decent scoring, but the music is tonally all over the place, switching from scary, to goofy, to scary again, usually in a single scene! 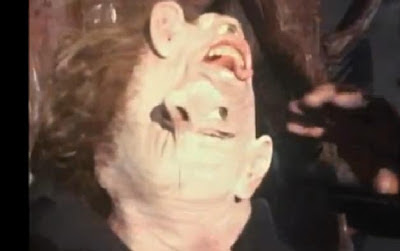 The effects are simultaneously terrible, and good. They're all very unconvincing, with cardboard phones, bad wigs, and walls in rooms with the backgrounds painted on, but to make the backdrops and backgrounds has clearly taken quite a bit of work, as opposed to if Nick Zedd has simply filmed in normal buildings and places. 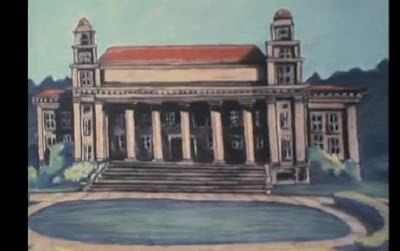 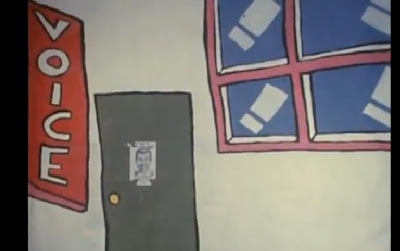 The gore effects are the cool, very fake, mannequin-y effects that are usually present in super-low budget films that don't care about having convincing gore. As for Dr. Frankenberry's monster, it looks pretty good (and one of its heads closely resembles the aliens from Tim Burton's Mars Attacks!). 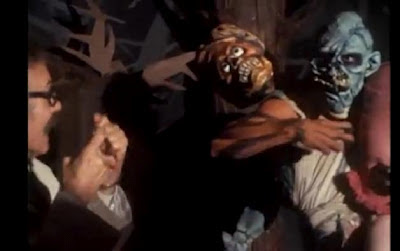 So, in closing, I recommend Geek Maggot Bingo for those who want to watch a really bizarre flick! If otherwise, I wouldn't.
Posted by Chris Hewson at 8:34 AM