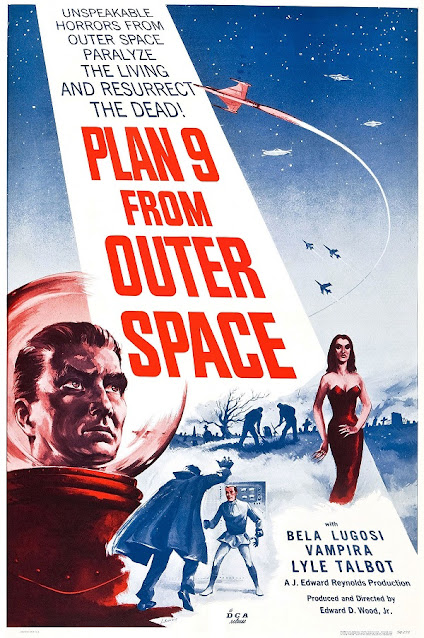 Edward D. Wood Jr. was a director brimming with imagination, but short on talent, as his 'unusual skill' has brought the world what have long been considered the worst films ever made. With laughable effects, bizarre dialogue, clunky acting, his filmography is never boring. The crowning achievement of his career is undoubtedly Plan 9 from Outer Space, the most quintessentially 'bad' b-movie of all time...
Strange things are happening in a sleepy town. After the death of an old man and his wife, people begin turning up dead, torn to shreds. The police are stumped, and soon experience casualties within their own ranks. Pilot Jeff Trent may hold the answer though, after he witnesses a mysterious craft in the sky that he can't explain. It soon becomes apparent that aliens have come to earth, and they bring ominous news... 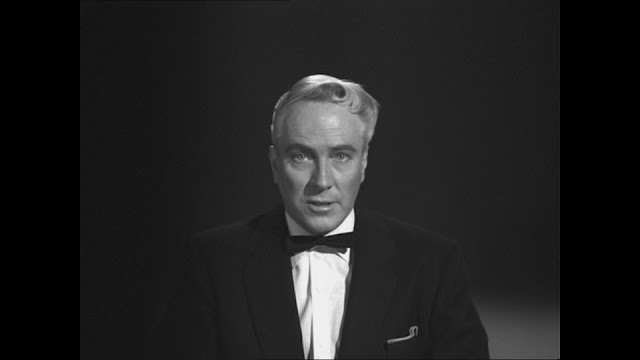 I recently read a quote about Ed Wood that I felt worth repeating here.
"Plan 9 From Outer Space has long been ridiculed as "the worst film ever made", and quite unfairly. While it's undeniably incompetent, what you see is Ed Wood's deep love for the magic of the movies, expressed in a clear vision that just so happens to be hampered by the fact that he's working with no budget, no real actors (save Bela Lugosi), borrowed and stolen sets and props, and a script that he's had to write all by himself (and although he has ideas, he's clearly not a writer). That he, as a nobody with dreams, managed to make feature films when the medium was least accessible and most expensive is a testament to his tenacity and personal investment in movies. So, it's unfair to label him the "worst director of all time", because chances are that if he'd had the keys to the studio system, and had access to money, stars, professional sets and crew, and professional writers to collaborate with, he might have turned out a Forbidden Planet." 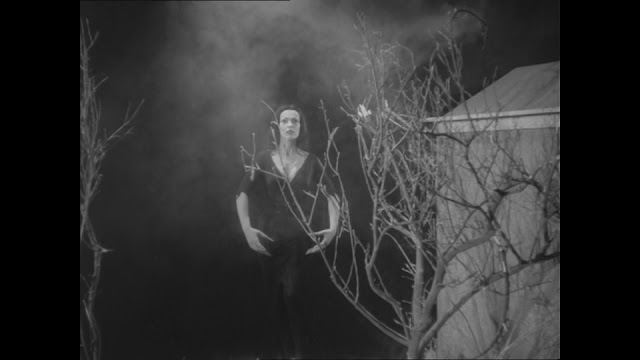 That strikes me as being so true. While the idea of Ed Wood making a masterpiece just because he got studio backing might sound laughable, I think of Star Wars. George Lucas when left to his own devices would write dialogue or get performances that were infamous for years. Some creators are great on their own, but others need that helping hand, with which they can achieve greatness. Who knows, maybe if he'd had some other writers to help, reign him in with the sillier dialogue, and iron out any problems, we could have gotten some genuine classics! Though of course I am glad we got Ed Wood films as they are, because I wouldn't wanna live in a world without these hilarious gems. 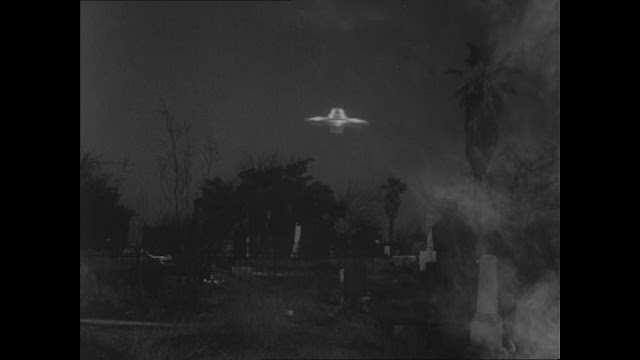 Plan 9 from Outer Space is a traditional 50s B-movie in every sense. It's got human aliens, dodgy flying saucers, a front-and-centre moral about the dangers of advanced weaponry, and even features Bela Lugosi!...In a way. It moves along at a consistently brisk pace, and bounces between a few neat settings, with even a nice spooky graveyard! 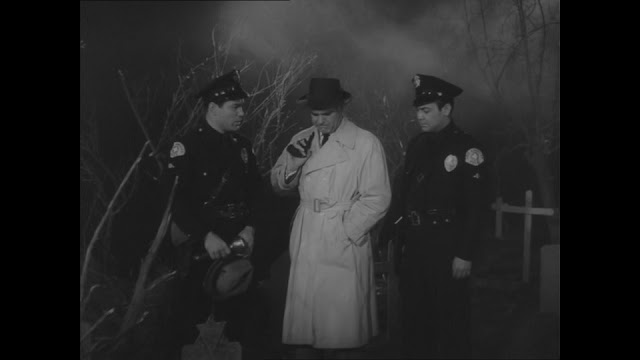 The movie is fairly competent in some ways, but in others you have amusing goofs like visible strings on the flying saucers, shadows of the boom mic appearing, wobbling tombstones, as well as little continuity errors here and there, if you're an eagle-eyed viewer. The most notable bit of incompetency is the replacement for Bela Lugosi.
Beyond the technical side, Plan 9 is full of unintentionally funny moments, such as the police and their bad habit of gesturing or scratching their heads with their firearms (you expect those things to go off and shoot their fellow officers in the face!). 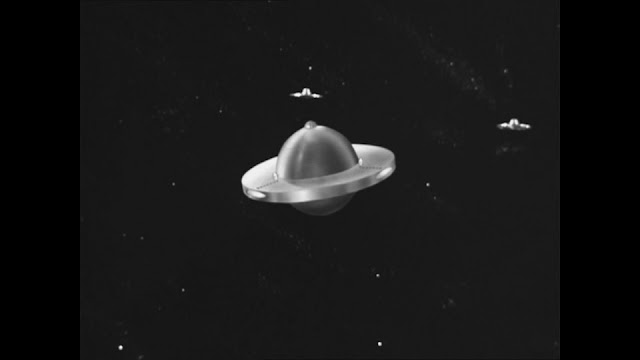 The film is famous for its legendary dialogue, such as:
"Future events such as these will affect you in the future."
"This is the most fantastic story I've ever heard." "And every word of it's of it's true." "That's the fantastic part of it!"
"One thing's for sure. Inspector Clay is dead. Murdered. And somebody's responsible!
"Visits? That would indicate visitors."
"I've never seen you in this kind of mood before." "That's because I've never been in this kind of mood before."
Or the flubbed "The saucers are up there, the cemeteries out there, but I'll be locked up in there."
And the aliens get plenty too, like  "Because all you of Earth are idiots!", and the famous "Your stupid minds! Stupid! Stupid!" 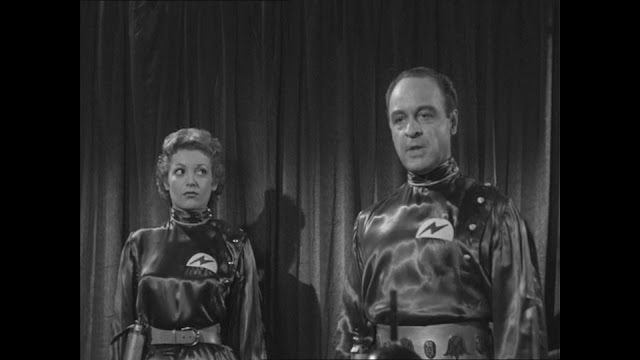 The film's message is actually a really good one! Using the fictional element of Solaranite (the pronunciation seems to depend on who' saying it), it condemns humanity's ever-growing search for bigger and better weapons, regardless of the outcome. While it's a touch hamfisted in the delivery, I really like the concept that aliens are invading not because they're evil, but because we're doing such a spectacularly shitty job that we must be stopped before the universe blows up! 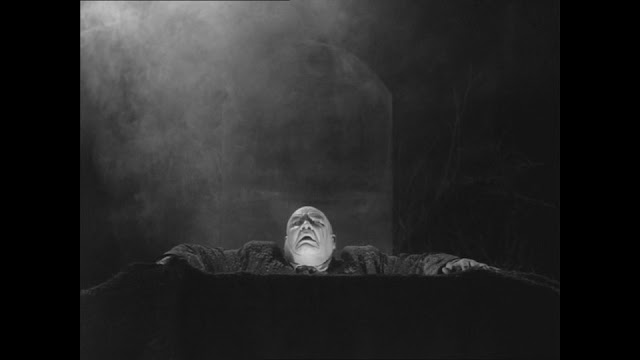 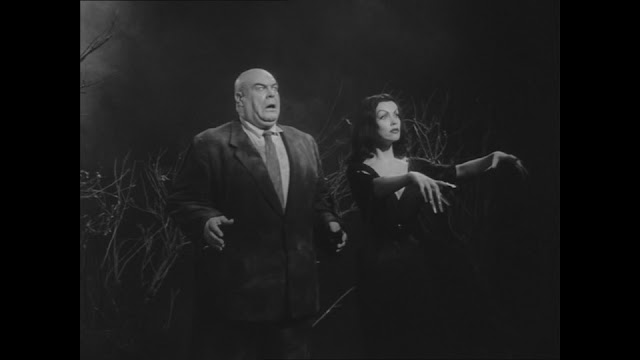 Where this goes off the rails a bit is in the climax. Naturally we know the film won't end with the bad guys winning, or with the heroes calmly going "Yes, all of that sounds reasonable, we'll end all weapons programs right away', and they instead treat the aliens as monsters who need to be destroyed. But by doing so, the film reduces what were previously likeable and heroic characters into aggressive caricatures who'd set themselves on fire if it meant proving a point.
The acting in Plan 9 is a mixed bag. The majority of the performances are decent. Especially performers like Lyle Talbot and Joanna Lee. Others deliveries are more wooden or laughably over-the-top. Dudley Manlove is a hoot, while Tor Johnson, Vampira, and Bela Lugosi (sort of) make for an iconic trio as the ghouls. There may have only been three, and we do make fun, but who could ask for 3 more distinctive zombies than this! 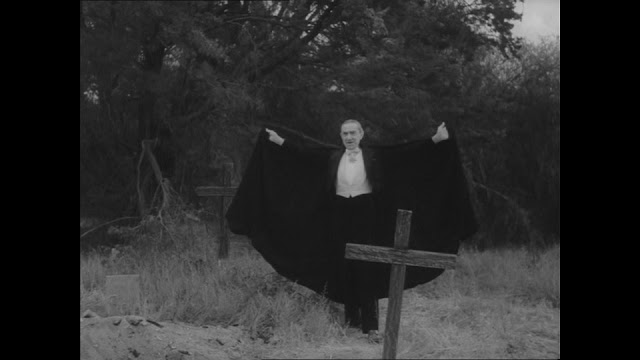 It's the casting of Bela Lugosi that warrants some explaining. He had just been in a few Ed Wood pictures, and was all set to appear in another one when he suddenly passed away. This meant that there were a few scenes filmed of him roaming around as a vampire, and Wood had to figure out what to do with them. After all, he wasn't going to let it go to waste. To his credit he made them fit into the film as it would become really well! Less impressive though is everything else. Since this footage was so incomplete, Wood hired the first person he saw (his wife's chiropractor, to be specific) and had him hold a cape to his face the whole time so the audience couldn't tell it wasn't Bela. It's...less than successful. The man is several feet taller, has a completely different head and build, and is quite obviously hiding his face. It's an amusing element, and as good a workaround as we were ever going to get when the main actor died before production could really begin. 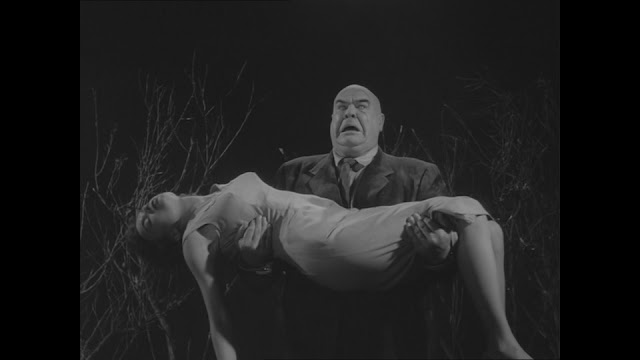 The music here is decent enough, providing a  that's typical of 1950s b-movies without being too cliched, and it all helps build up a great atmosphere
The direction itself is fairly creative, with many well orchestrated shots! The one of Tor Johnson rising from his grave, for example. Sure, it's hampered a bit by Tor clearly having trouble getting out quickly, but it's still a wonderful image. 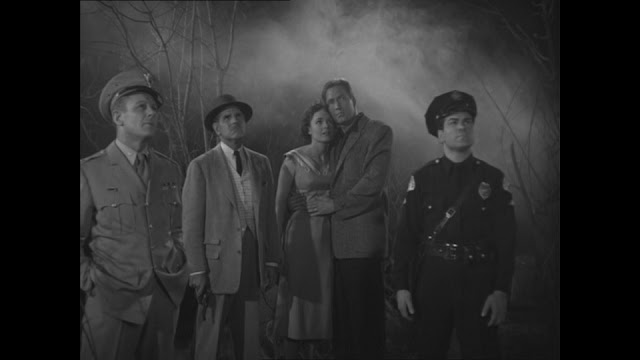 Plan 9 from Outer Space has earned its place in cinema history. Not for the reasons its director intended, but I doubt he'd be the sort of person to mind. If you're eager for a fun time with some mates, this will make for a great movie night, and even just watching on your on is a fun time...
Posted by Chris Hewson at 7:54 AM