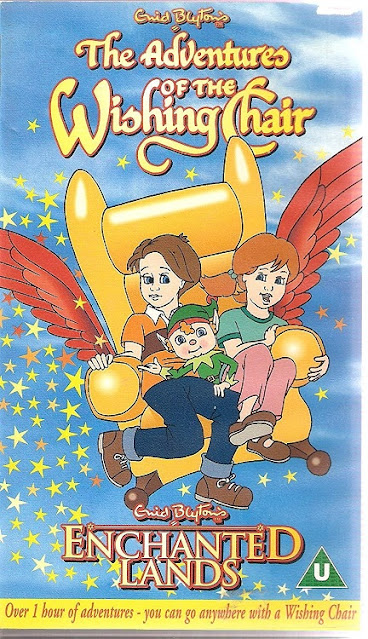 Enid Blyton has long been remembered for her endlessly creative (not to mention prolific) bibliography, including such creations as The Famous Five, The Secret Seven, Mallory Towers, and The Enchanted Wood, among countless others. Her series' may have been simple, and often derivative of each-other (she probably has as many as 5 variations on the Famous Five), but I've always enjoyed her books, and am always keen to seek out adaptions. 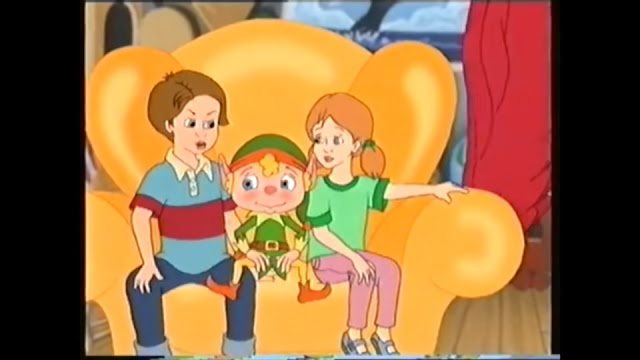 Peter and Molly are two funloving children, who often go on adventures with their pixie friend Jinxy, with the help of their magical wishing chair. It takes them to all kinds of magical places, and often drops them into dangerous or hair-raising situations.
Quite a few years ago now I discussed the animated series Adventures of the Faraway Tree, part of the Enchanted Lands block. It was a low budget production coming from the tail end of the 90s, and is very cheesy, but also charming and fantastical. The Wishing Chair is much the same, and goes to show just how reliable an author Blyton was. 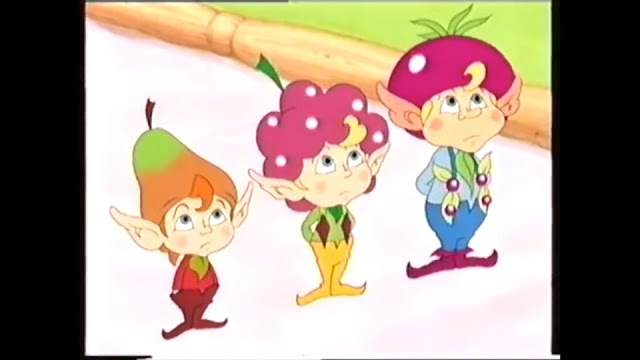 Each episode runs at only 10 minutes long, and tells an entertaining story, with good hooks, effective stakes, and a ton of creativity. You have crooked houses, lemonade that breaks the laws of physics, gnomes who steal everything that isn't nailed down, a land of clowns who extort favours out of visitors, a jazz playing octopus, and much more. 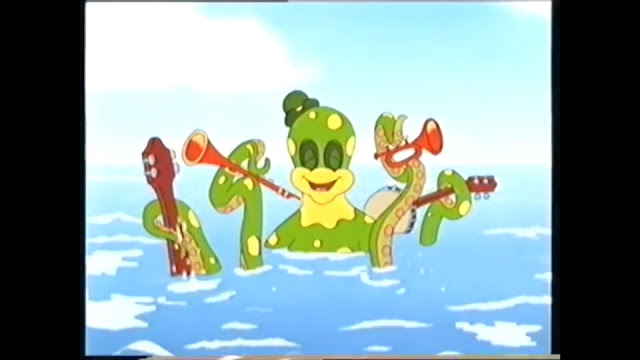 The main trio are a lively bunch. Molly and Peter are typical kids, occasionally deserving a slap upside the head or a groan for being so dim, but they are otherwise entertaining and likeable  While Irish pixie Jinxy   And not one to be impolite, I won't forget the chair! It's a cute friend to the gang, but exceptionally naughty in places
There are plenty of quirky supporting characters each episode, and they are all over the place. Some are fun, with many eccentricities, like the Australian dragon who's always cooking a barbeque in-case visitors show up (which is never), and a diabolical wizard with a propensity for bad jokes. Others are more on the grating side, like a group of pixies who all speak in unison, in high pitched voices. None are genuinely bad, but depending on the viewer, they might be more of a hindrance to watching. 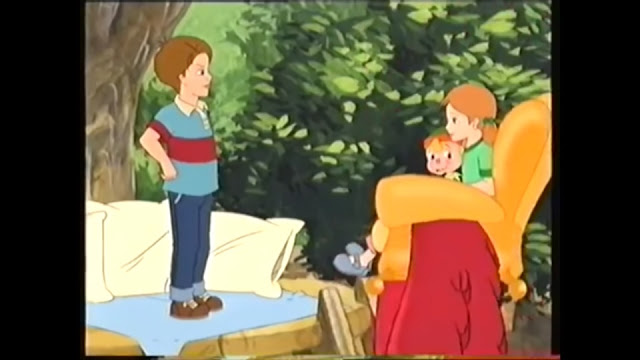 The dialogue can be pretty hilarious at times, in and out of context.
"We only wanted to know if you'd seen a pixie falling down from the sky."
"Children these days, they're all so young!"
"How dare you two turn into balloons!"
There's also no shortage of adorable childlike lines, i.e. "Stop blowingit it" or "Coco-conuts". 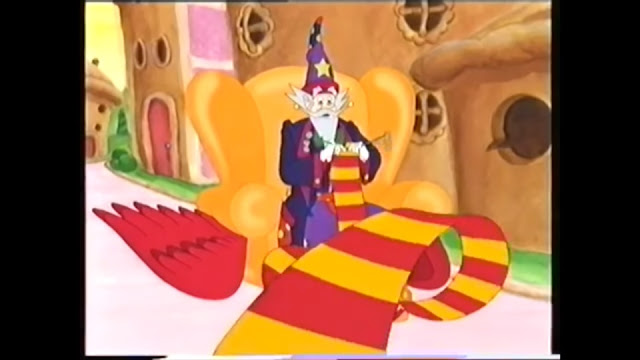 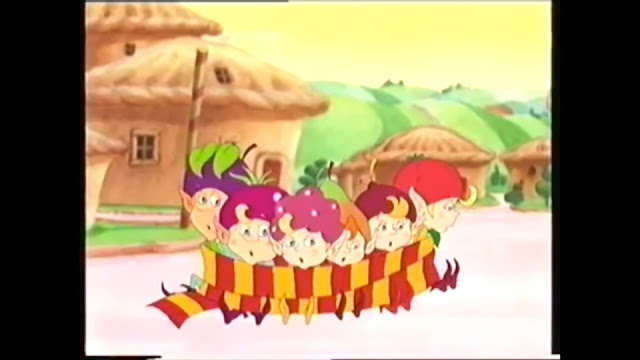 Just about each episode has some kind of moral or lesson to teach, and these are usually quite obvious, but it is a kid's show, and they are good lessons, regardless of how clunky or overt they might be. 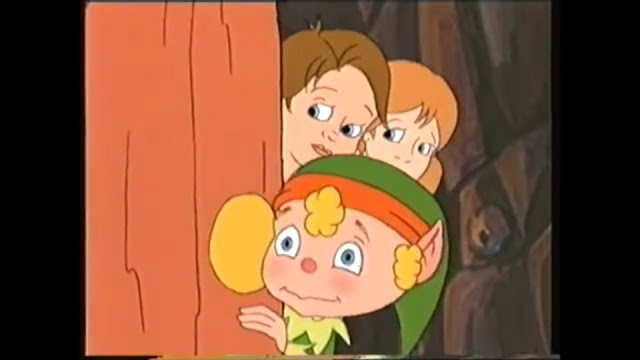 This is smaller in scale compared with Faraway Tree, but that's ok. It  as different, even if it is almost the same show in many ways. If I had to pick one criticism, it'd be that the series never really bothers establishing its world and characters. It just begins with everyone already knowing each-other and going on adventures with this magic chair. This is hardly Lord of the Rings or anything, and is fairly easy to grasp, but a little bit of worldbuilding would have been nice at least. 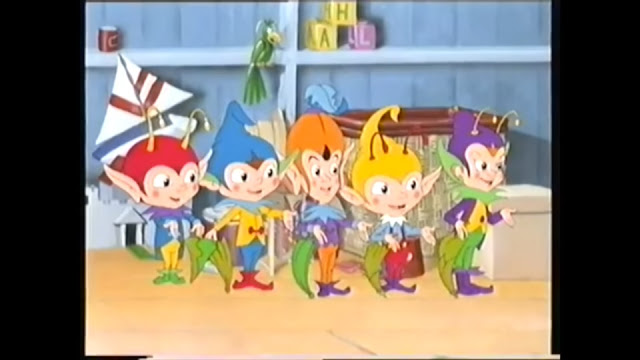 The animation is low-budget, and this is evident in quite a few ways, but despite this cheapness, and occasional re-used shots, I wouldn't say it's bad.
The acting is all serviceable. Nothing amazing, and some of the performers can verge on the annoying, but thankfully any such cases are sparing enough to pose no problem. Overall it's cute enough, and they at least bothered to get a good Aussie accent, which I appreciate. 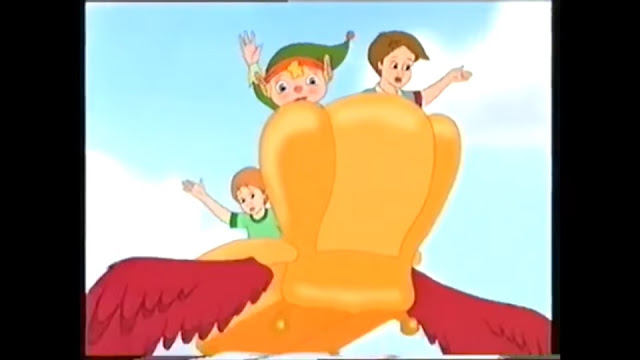 The Adventures of the Wishing Chair is a great companion piece to the Faraway Tree series, and is perfect for kids to watch. If your kids are feeling like something lighthearted after watching a nice grisly horror movie, this is the perfect diversion...
Posted by Chris Hewson at 7:37 AM