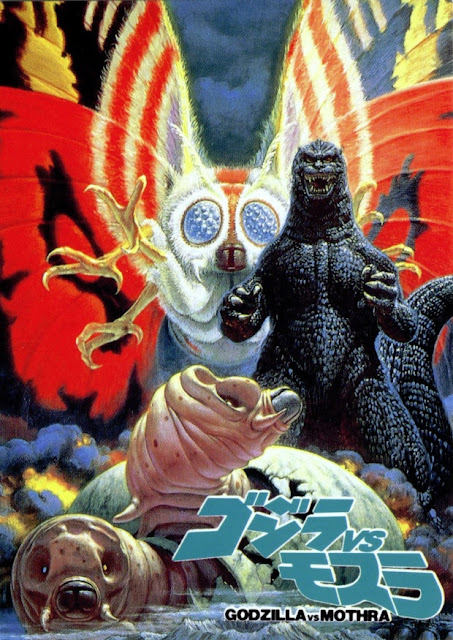 When a mysterious object in unearthed on faraway Infant Island, a light-fingered archaeologist and his = ex-wife are sent on a retrieval mission by the Japanese government, and a = corporation. They discover the object is in fact a giant egg, and the = inhabitants of the island tell them the story of Mothra, Earth's guardian. These mystical beings can sense a disturbance in the Earth's natural order, and know that the monstrous cosmic equaliser Battra is coming. Also entering the fray is Godzilla, who may prove enough of a foe for both guardians to team up against... 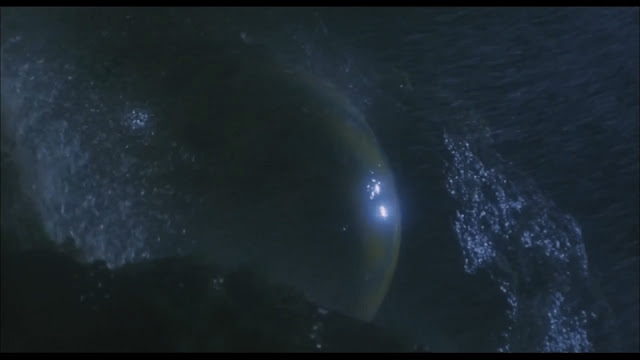 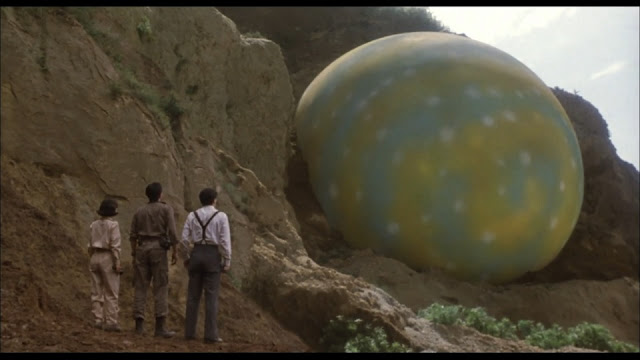 Godzilla vs. Mothra is yet another winner in this long-running series. Beginning life as a standalone Mothra script, it instead became the follow-up to 1991's Godzilla vs. King Ghidorah, replacing the three-headed monster when studio heads decided it'd be better to bring back a different classic = rather than dip into the same well twice in a row (plus, Mothra was more popular with women, so the people have spoken, and what they want is giant butterflies!).
The tone here moves away from hard science fiction and into a more fantasy-oriented territory, and in a very effective way. It knows to introduce just enough magical elements without going overboard and turning everything into Lord of the Rings/Harry Potter. What we get is a lighthearted entry in the series, with enough seriousness to keep it grounded, but enough = and funny dialogue to keep things from ever getting too grim. 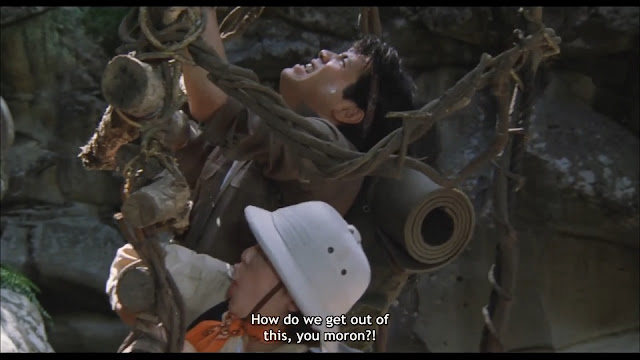 The film also has an Indiana Jones vibe for the first act, which lends a fun style to the film! If you're searching for a way to make a Kaiju film's human plot engaging, you can't go wrong with a good old archaeological adventure! It fits very well with the tone of the film, and the series overall, too.
What I like about Japanese cinema is how they could take inspiration from the cinema of other countries while still retaining their Japanese core. If you look at a modern Russian film for example, they're just lazily copying the west. But here it's not the case. Even Kaiju themselves were inspired by U.S. b-movies such as The Beast from 10,000 Fathoms, yet they were always quintessentially homegrown. 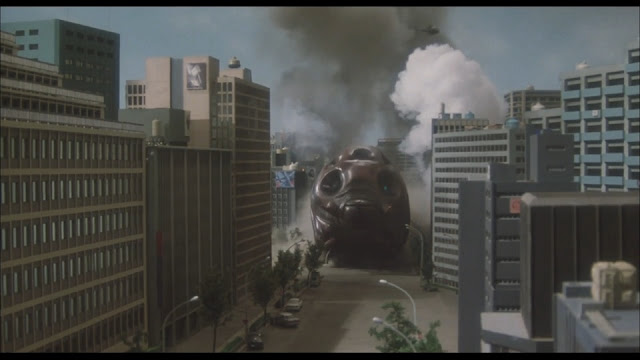 This reimagines many elements of the classic Showa series, with a new Mothra, return to Infant Island, and the fairy twins, now known as the Cosmos (strange name, but I guess it makes more sense in Japanese?). The Heisei series always strove to nail a good balance, which is why they were never too dark or too goofy. These were films daring enough to be =, but also not so self-serious that we couldn't be given tiny fairy women who = by singing to a giant butterfly. 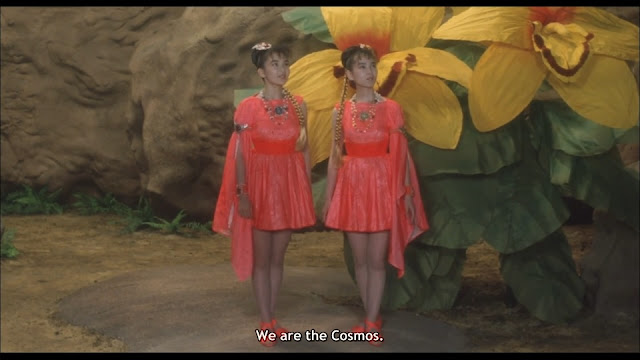 The biggest new element is Battra, Mothra's dark counterpart. Not evil per se, Battra is an extremist monster sent by the Earth itself to eradicate civilisations when they get a bit too high and mighty with how they treat the environment. She makes for a cool new part to Mothra's mythos (try saying that when you're drunk!), and is a great addition.
The pace here is a fairly quick one, and even though the movie could have easily lost 10-20 minutes, it's never overlong or boring, and everything happens in the right = for the most part, barring a confusing moment here and there (like how Takuya gets ahold of the fairy twins). 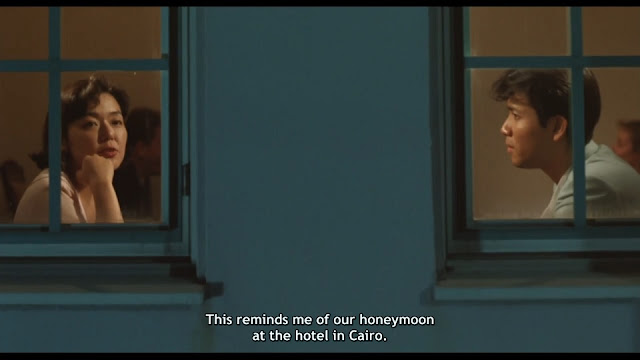 The characters in Godzilla vs. Mothra are a [highlight]. Takuya and Masako are a high point. Making for a likeable and [engaging] duo, they have a fun banter, that's hostile enough to be =, while not being so much that it's unpleasant to watch. You can definitely see the spark and chemistry they have, and it is believable that they'd get back together after this adventure.
Their temporary sidekick is corporate lackey Ando, and he's a little inconsistent. He undergoes a positive change surprisingly early, and it was pleasant for such a character see reason right from the get-go, for a change But then he suddenly kidnaps the fairy twins for his evil boss, and we see his true motivations. Yet he's still acting understanding and =. What he says and what he does never gel much, making his character feel uneven. As for the main villain (the corporation head), he's a hoot. It's funny seeing how he bemoans to the heavens how this can be happening to him, then when a subordinate flatly tells him why, he suddenly changes his tune back again to his self-righteous =. 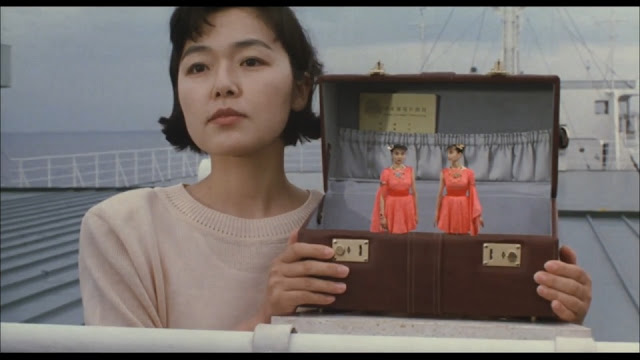 The fairy twins are a sweet pair. Wise beyond humanity's=, and part of a greater metaphysical tapestry (or something), yet are not so = that they're unwilling to help us. They're more than happy to help save the world, and they take all = [setbacks] in their stride. The rest of the cast is =, namely the = adorable daughter, who plays a nice part. Last up is recurring psychic Miki Saegusa, who barely appears and does almost nothing of note. Even though I've seen half the Heisei series and I know he she is, I still had no idea who she was here until I read it online. 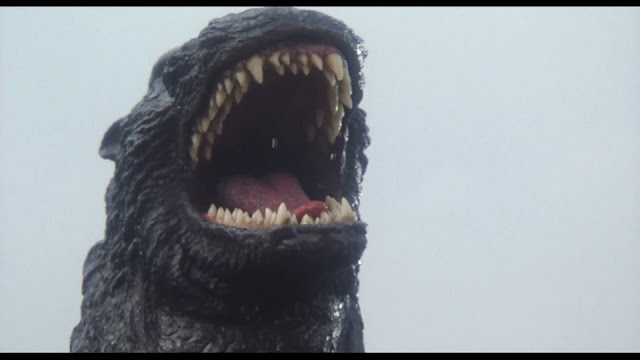 Onto the monsters. Godzilla here isn't bad so much as he is grumpy. His personality in this film can best be summed up with a comment I read on youtube-"I kinda feel bad for Godzilla, he just wanted to sleep but got beaten up by two moths". Unfortunately the big G doesn't appear that much. He takes almost half the movie to show up, then falls into a volcano with Battra and [neither of them show up again until the last act.
Mothra gets much more focus, and she is a =  A more benevolent monster, she still causes her fair share of property destruction, but it's not her fault, she's big! Japan should make its streets wider if it keeps being attacked my giant monsters. 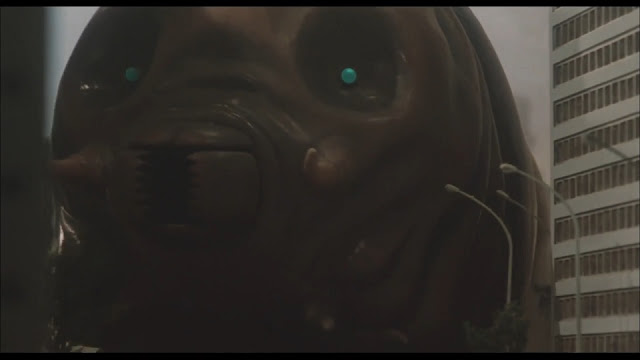 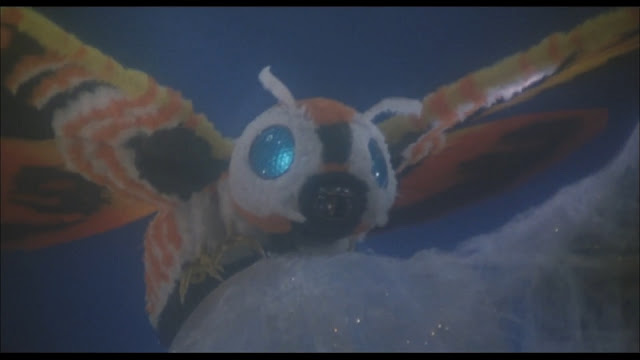 Mothra hatches pretty early on, and spends much of the movie in her larval form, before finally emerging as a glorious colourful butterfly. While I wish she would have transformed sooner, it never feels like too much time has passed, and the moment is built up well, with weight behind it when it comes.
And lastly, Battra is a good new opponent, with an interesting story and motivation. She appears a little too = though, and her (his?) relationship with Mothra is lacking. The two never even really fight or even interact much. She only fought Godzilla once, disappeared for half the movie, then suddenly turned good 5 minutes before the end, making the team-up feel a bit rushed and unbelievable. 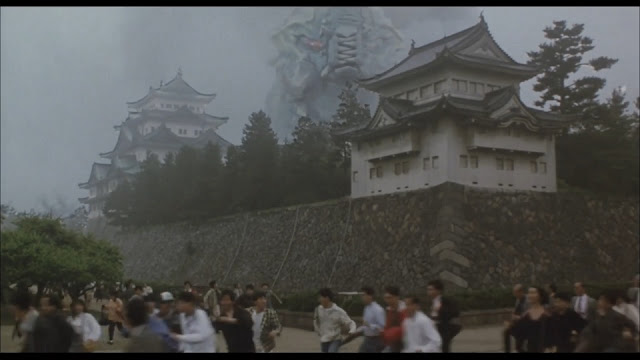 Some accuse Godzilla vs. Mothra as being too preachy and on-the-nose with its environmental message, and I can see why, but I respectfully disagree. There's a fair amount of = dialogue, but I felt it worked. Sometimes it's ok to be unsubtle, and this is one of those times/an example. Everything they say is correct after all, and points people should learn. Some of the dialogue does veer into being too on the nose though, like the whole exchange during Godzilla's emergence. ()
One random thing I found amusing is how quickly characters know things. For example, the military officials only just learned of Battra's existence 5 minutes ago, but already they say things like "Sir, Battra is approaching fast!" Even the daughter already knows of the Cosmos twins,  On that note, it's hard for even the hardest heart to not melt when she calls the friendly monster "Mothra-san". 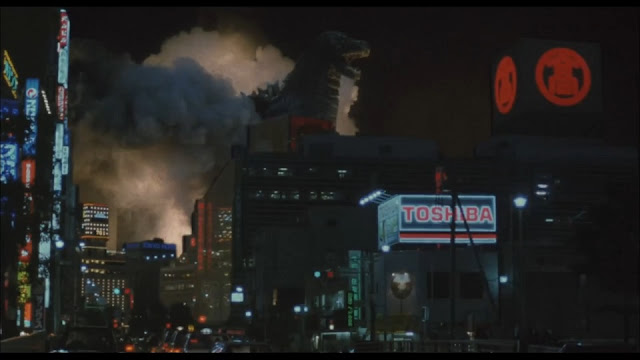 The fight scenes here are great fun. The opponents and their attacks feel distinct. The underwater battle is great, complete with stylish drowned sound effects and roars. The climax is a great one, with lots of enjoyable moments. According to the crew, it was originally intended to be more creative, set in the ruins of an ancient civilisation, but money and time didn't allow it. While this is a shame, it's hard to feel we were shortchanged when we get such a fun final fight anyway.
The effects in Godzilla vs  Mothra are fantastic. The = both big and small are integrated perfectly into the action, and no effect looks amiss or disappointing, from laser blasts, giant cocoons, levelled buildings, and more. 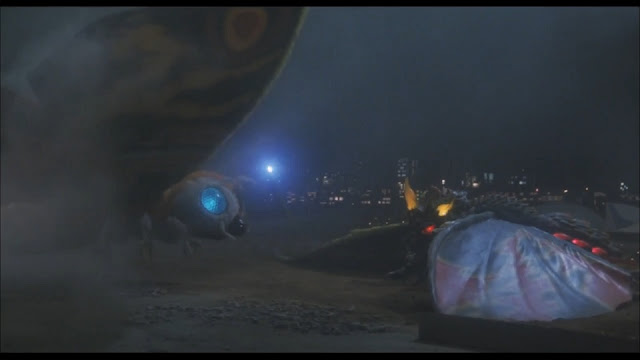 Godzilla looks great as usual, and is such a well designed costume that not only does he hold up in close-ups, he looks fantastic in them! Mothra is cute and = as a larva, and bright and majestic in he main form, and it's great seeing this particular kaiju on a Heisei era budget. Her eyes are especially expressive, and compare well with those of her dark half. Battra's design is more demonic, with enough insect traits.
The direction here by Takeo Okawara is spectacular! Not only are the monster fights shot well, but many other moments are visually distinctive too, namely the Indiana Jones style elements, and everything involving the fairy twins. The location work is great too, with superb =. 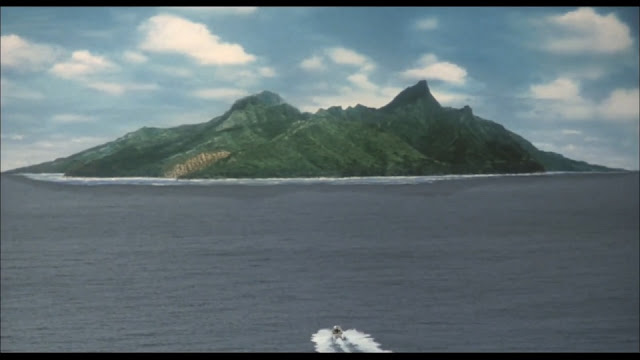 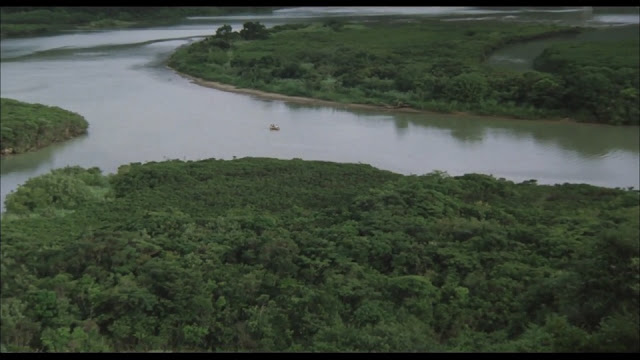 Musical titan Akira Ikifube returns once again to score the series =. The score is a mix of old, new, and remixed tracks, and it's a joy to listen to. The familiar beats   while the new ones are rousing. My favourite = are the Mothra songs, which are reimagined very well.
The actors are all good here. Tetsuya Bessho and Satomi Kobayashi are great leads, while Keiko Imamura and Sayaka Osawa excel as the new twins of Mothra. Everyone else does fine, with no dull performances at all, even if some are underused. 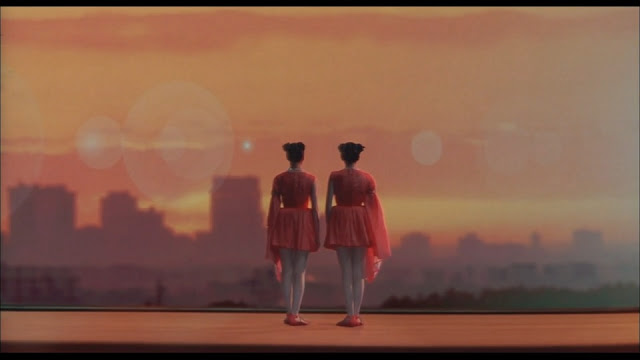 Godzilla vs. Mothra may not be a perfect film, but it's still a more than serviceable Godzilla entry, giving lots of enjoyment to everyone.
Posted by Chris Hewson at 1:41 AM