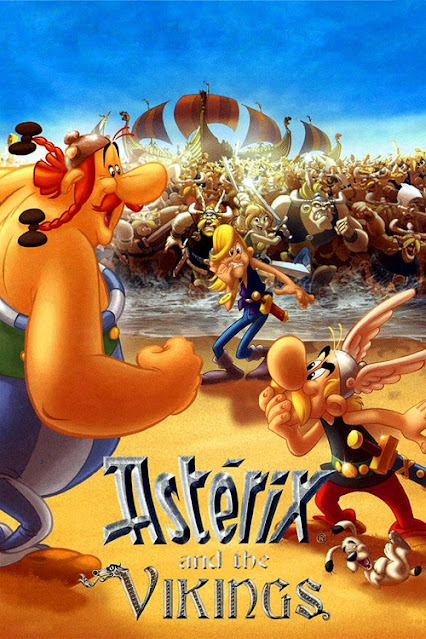 Over the years, the Asterix comics have received their fair share of adaptions. Usually straight from France, since the only other market really big enough to do it is America, and they've never read a European comic before in their lives. Some of these are live action, and some are animated, including a couple of great 3D outings in recent years. Another recent effort was the 2D animated Asterix and the Vikings... 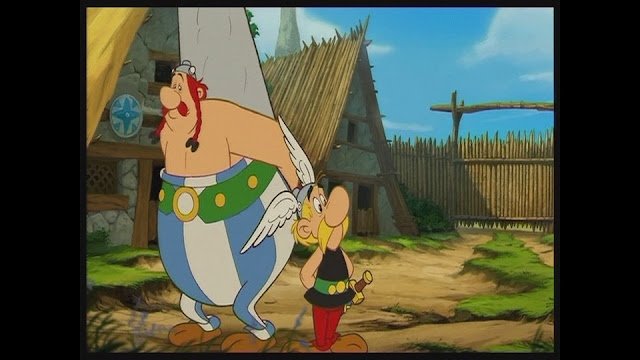 Asterix and his friend Obelix are living their day to day life in their Gaulish village, hunting boar, and punching Romans, when they are entrusted by chief Vitalstatistix to train his nephew in how to become a man. The young Justforkix is a weedy vegetarian, unwilling to learn and completely useless in all things combat, much to the duo's frustration. But things take a turn when a band of Vikings come ashore. Under the mistaken impression that fear literally gives you wings, they seek the 'Champion of fear', and think they've found it in Justforkix... 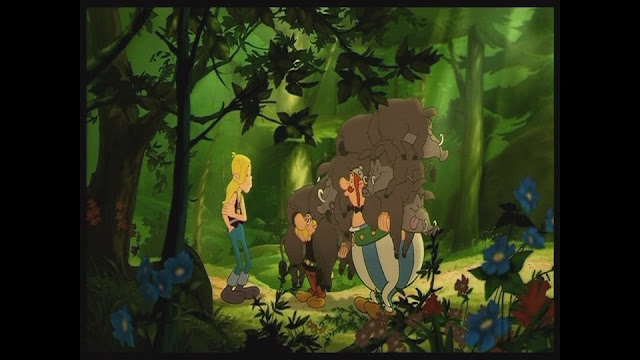 Asterix and the Vikings is a decent adaption of the source material, and entertains solidly enough. I was wary going in, because it gave off warning signs of being a cringy modern update. While there are a few modern touches here and there, including some Americanisations (some courtesy of the U.S. dub), and these are as out-of-place as you can imagine, the film is still a reasonably faithful adaption of the series. It adds in new stuff, eliminates other things for time, or to fit this new version of the story, etc, but never feels like it's a bad effort.
The story is fairly decent, and never boring. There's always something going on, and the comedy is effective. Where it really made me laugh was the ending, which uses Cacofonix's 'musical skills' in a hilarious and perfectly fitting way. The climax is suitably action-packed, even if it does feel like it ends three times already, yet still keeps going. 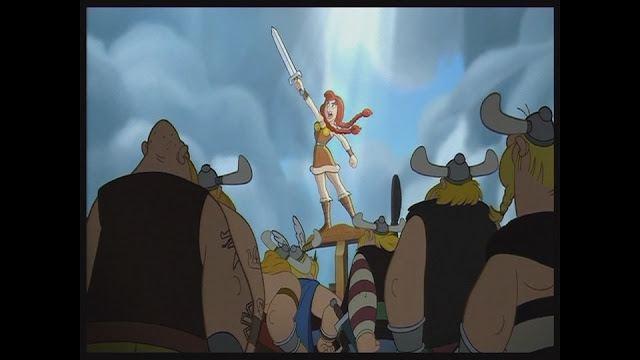 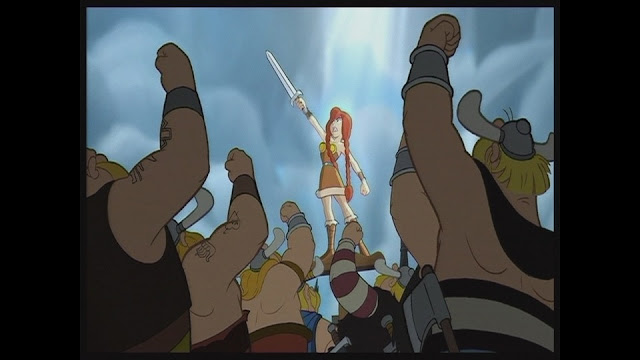 The characters here are an entertaining bunch. Asterix and Obelix are fun leads. Not only are they a great duo as usual, but they also share a good dynamic here, with how they train and manage their new pupil. Justforkix is a mixed character. He starts out as a whingey dickhead, but is likeable on other scenes, and gradually endears himself. Save for the odd scene where you feel like ringing his neck, of course. The Viking chief's daughter Abba is cute as a button, and spunky, sharing good chemistry with Justforkix.
The villains are an amusing bunch, from the scheming seer Cryptograf, his idiot hulk of a son Olaf, and the angry and impatient chief Timandahaf.
One touch I didn't like was the obnoxious forced 90s girl power message. The kind where you think "I agree completely, but could you try being more subtle?". On the other end of the spectrum though, there's some really biting commentary later on, which felt like a great counterpoint. 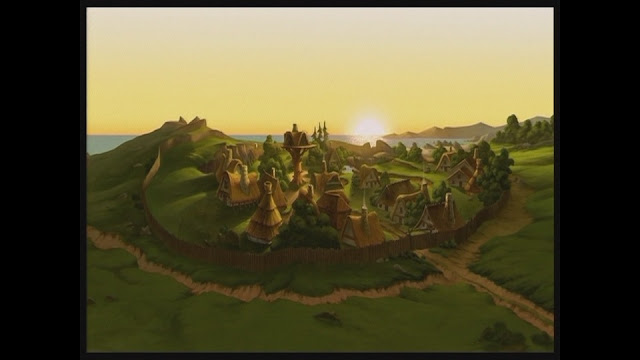 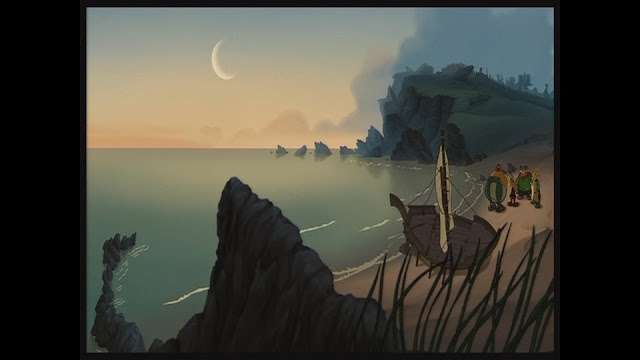 The animation here is spectacular! The characters are all realised perfectly, as if pulled straight from the comics, but the settings are where the movie really excels. Everything from the Gaulish village to the snowy Northern lands look beautiful, and there's a level of effort in the little things I really appreciate, like the way snow falls. 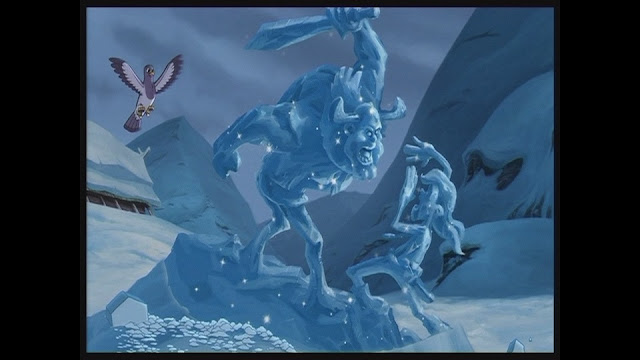 The general soundtrack here is pretty good. But the most out-of-place element in the film has to be the modern pop songs crowbarred in. From an Eye of the Tiger montage, to recitals of Get Down on It and Superfreak. Some of these scenes kinda work when you get into the flow of them (and most of that is probably down to the songs themselves), but it is really weird having such modern songs in what's supposed to be a period film. The Celine Dion track that plays over the credits fares a bit better, and is pretty decent.
Since I saw the American dub, I can't speak for how the original French actors did, but the  voices are pretty good. Paul Giamatti is a decent Asterix, while Brad Garrett captures Obelix's personality pretty well. Sean Astin is good as Justforkix, never coming off as too whiny, though he comes close. Some other voice acting alumni feature here, from Dee Bradley Baker (though how he voices a dog and pigeon is anyone's guess), to John DiMaggio, Grey DeLisle, etc. 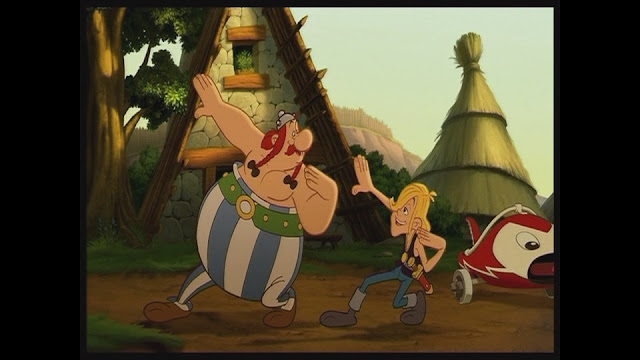 Asterix and the Vikings never really led to much in the way of a continuation, with the series' future being helmed elsewhere, but as a standalone adaption, this is a fairly good one, and sure to please fans of the comics.
Posted by Chris Hewson at 7:24 AM