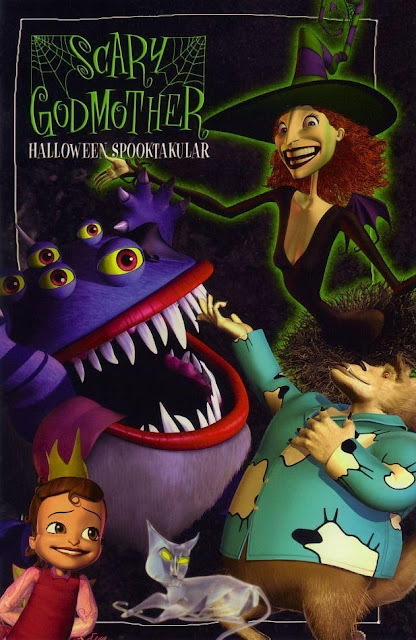 When I was a kid, I disliked many things aimed at my age demographic. Bananas in Pyjamas? Pass! How about The Texas Chainsaw Massacre! Mary Poppins? More like Evil Dead! This isn't to say I hated all kids media, but for many things I was quick to dismiss them as childish. I had this assumption about Scary Godmother when I saw the ads, but after I caught it on TV one day I was entranced, and took back every negative thought I ever had!... 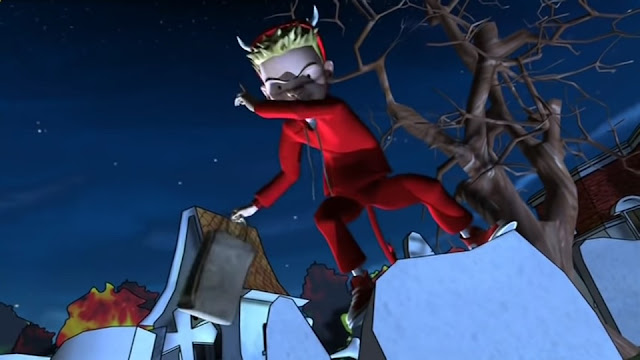 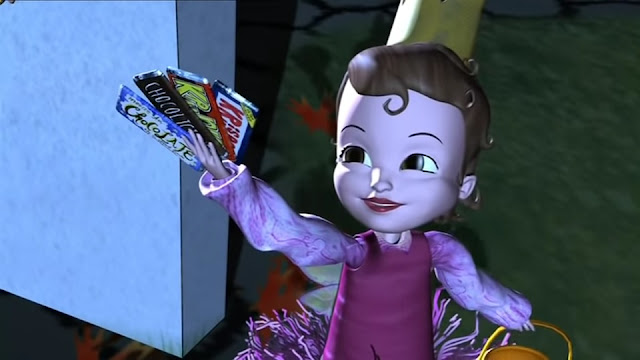 One Halloween night, mean boy Jimmy and his three friends Katie Darryl and Bert decide to ditch his young cousin Hannah, so they can go trick or treating more efficiently on their own. They come up with a plan to scare her away by sending her alone into the 'Spook house', but things go wrong when she doesn't come out. As the trio wait impatiently for their plan to succeed, the deathly frightened Hannah soon meets her Scary Godmother, and realises the creatures of the night are nothing to be afraid of... 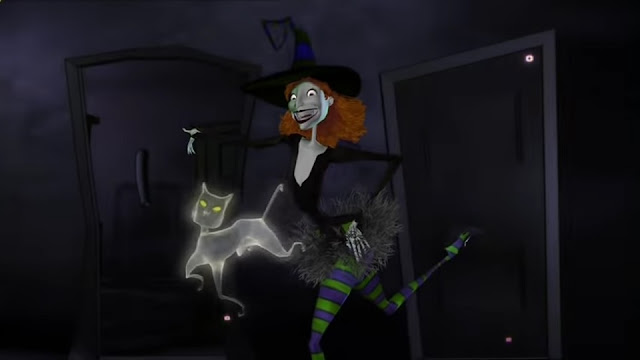 Scary Godmother is a delightful watch. Brisk at only 45 minutes, packed with plenty of entertaining setpieces and comedy moments. It can be a bit hyper at times, and one or two scenes are a little confusing, but theses are minor issues in an otherwise highly enjoyable film.
Onto the characters. Hannah is such a cutiepie! She's endearing, loveable, and has such a nice approach with everyone she meets. Scary Godmother on the other hand is the manic and fun-loving aunt you wish you could have. Never obnoxious, she carries the movie greatly, introducing us all to a world that should exist, if only the real world wasn't so boring. 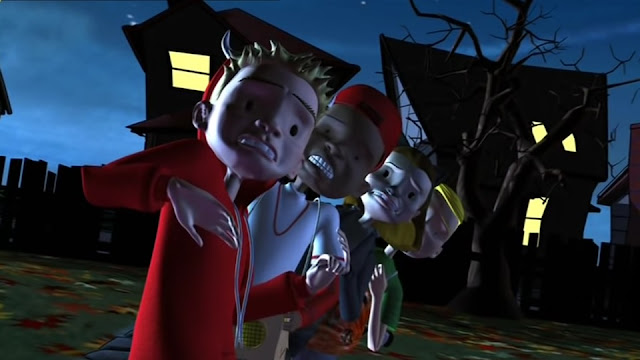 Jimmy is the most villainous of the cast, and amusingly unlikeable. Not a moment goes by when you don't want to slap him, but he's never genuinely frustrating. As for his three friends, I like the way they're written. They're not bad kids, and quite likeable in some ways, but between their cowing to Jimmy, and kinda dismissive attitude at times, you can see how they'd go along with this plan, and you do look forward to seeing them punished at least a little. What I found most adorable of all was the romance between Katie and Darryl. It was so sweet! I was hoping we'd get to see a kiss, but not quite. *sighs*
The monsters are great! From the campy skeleton in the closet Skully Pettibone, hungry werewolf Max, the amusingly droll vampire family, the gruff yet friendly Bug-a-Boo, and more, they're lots of fun, and no two are alike. 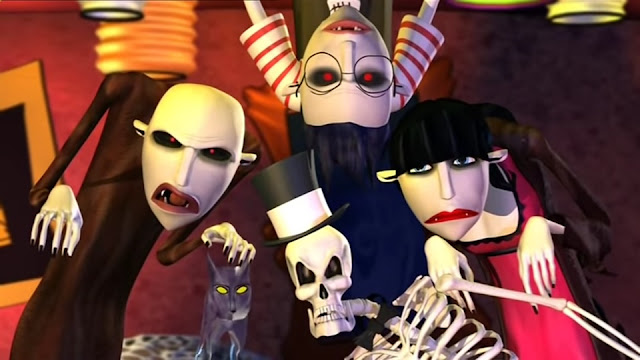 The animation in Scary Godmother is charming. While some nowadays say it's terrible and unsettling, I think it holds up perfectly well. The 3D models are well designed, and move fluidly, always with life in their faces (or DEATH, as it were! Mwuhahaha!), and even their eyes manage to avoid being lifeless or creepy, as often happened with other 3D animations back in the day (or even now). The environments are created with an illustrated fashion, and it's a really cool effect. The two styles mix awesomely, creating some nifty visuals. 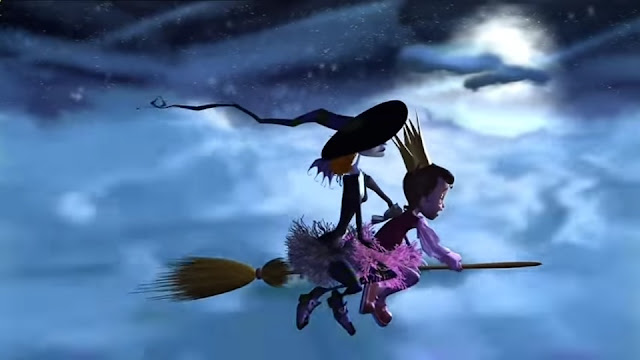 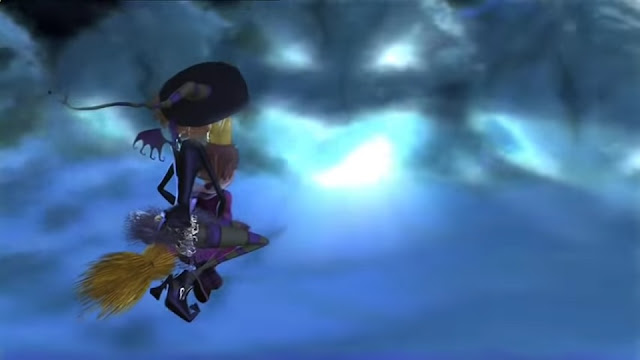 The directing is very good, and has lots of flair, with my favourite moment being the 'spinning' moment. It really shows off how good the integration is between characters and their location, and shows that the director wasn't just being lazy because he got a cartoon gig. There's a variety of other neat moments all throughout, and great visuals.
The cast all do a fine job, from the kids to the monsters. A couple of performances might be a bit too over the top for some, but there's nothing bad at least. The music is great too, with many super groovy tracks! We get   all with a Halloween ring to them. 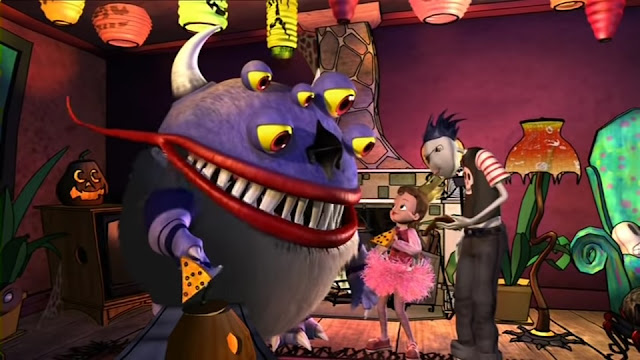 Two years later, Scary Godmother received a sequel, The Revenge of Jimmy, and it's likewise lots of fun! It continues the story without rehashing anything, and it's got a really enjoyable structure, and captures the spirit of Halloween perfectly. If ever anything goes wrong with your Halloween and it seems like things are done for, don't fret, because there's always a way to fix it, or always an alternative. A great message to share. The characters are loads of fun. Hannah has grown as a protagonist, and is older and more assured, while still an adorable and sweet-natured girl. The trio of kids are nicer this time round, and hang out almost exclusively with Hannah, though everyone is still friendly towards Jimmy, despite his consistent/constant attempts to destroy Halloween. The jokes continue to earn laughs, and there's a decent mix of laughs for the kids and adults alike. 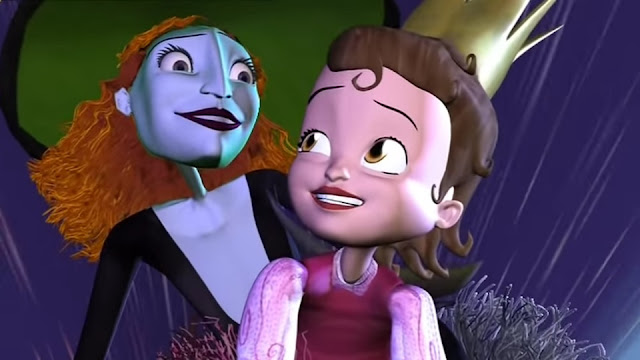 To finish, Scary Godmother is a wonderfully ooky watch, especially for kids! If you have any who want something gruesome, macabre, and terrifying, I suppose you could show them an R-rated move (goodness knows I would've been happy with that as a wee one), but if you insist on something family friendly, this is the perfect choice!...
Posted by Chris at 7:42 AM